Easter arrived yesterday and I found myself doing a last minute search for baskets in the basement.  I quickly realized that I'd done something different last year (maybe used the baskets they got for Halloween, which were now also missing) and apparently baby James did not have an Easter Basket.

So I grabbed Maggie's bubble guppies bucket and got down to work.

It can be difficult to fill Easter Baskets when you have dairy and wheat allergies in the house.  Patch appears to have outgrown his dairy allergy, and James is allergy free, but Maggie presents a challenge.  It means that our baskets aren't filled with candy anymore.

This year I did, however, find a giant gummy bunny that Maggie could have, which meant the other kids could have chocolate bunnies.  In addition each of the kids found a religious book, a book about one of their favorite characters, a Shining Light Saint Doll and a large egg (which were thankfully safe!  I was on cloud 9 when I found those and the bunnies!), with some sidewalk chalk in their baskets.

I'd also used Easter as a chance to expand the family game night collection with a couple of games that I know Maggie loves from speech therapy. 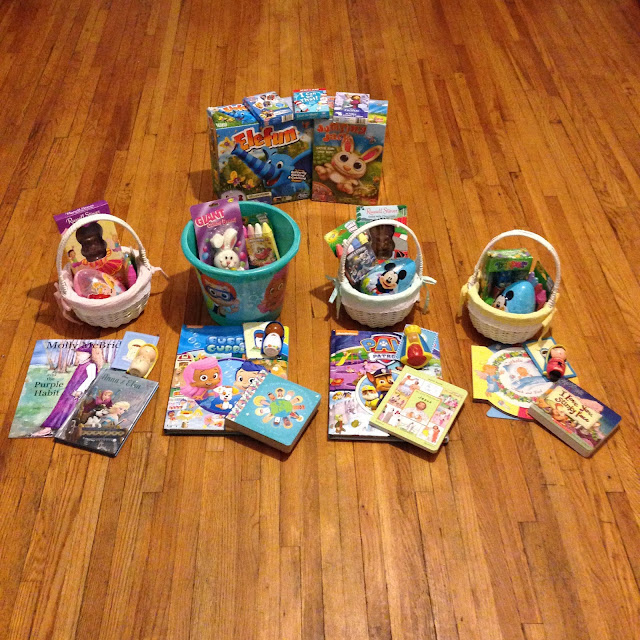 In the morning there was a stampede down the stairs.  Patch wanted to sing Happy Birthday to Jesus.  We talked again about why we were celebrating.  And the kids managed to devour their weight in candy, despite having candy lite baskets. 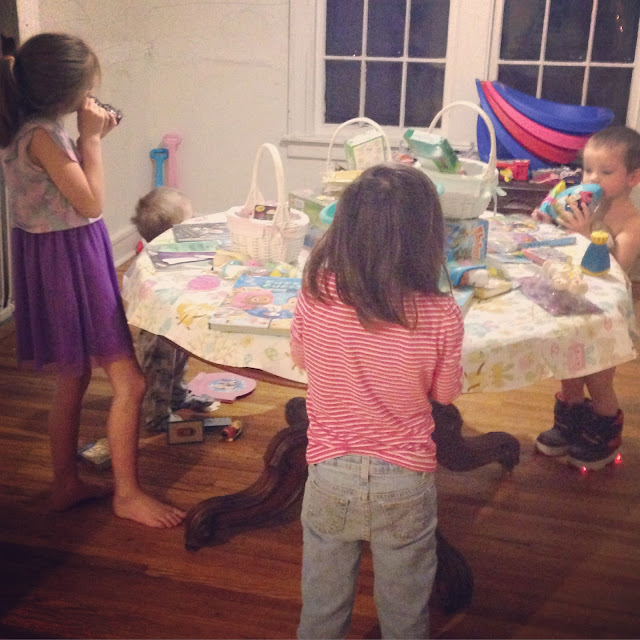 James is a fan of peeps.  Especially peeps skewered on a stick. 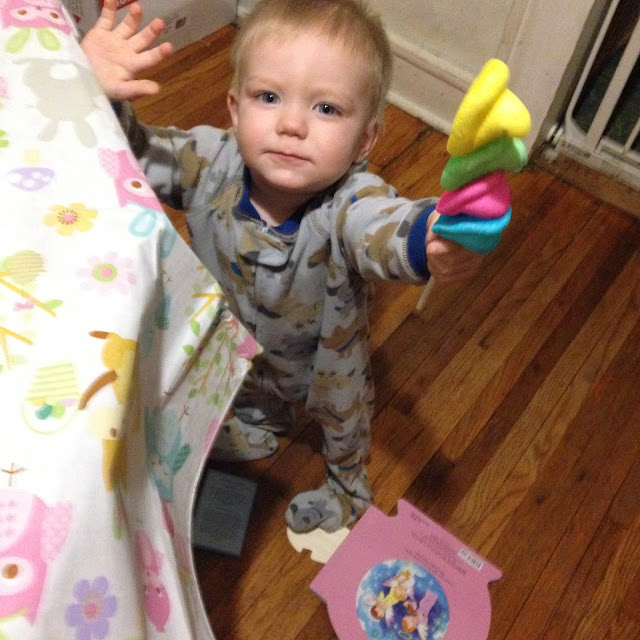 After washing faces and hands and bathing those children so covered in candy that nothing less would do, I managed to wrangle everyone into nice, clean church clothes.

Paul and I were rather nervous about how exactly they would behave.  They were pretty wild at home.  On the way to Mass, Patch excitedly chattered about "having fun" and "going to see Jesus!"  I was especially nervous since the little kids and I hardly went to Mass during Lent.  I was in the hospital for two weekends, and pretty sick, either with the viruses/kidney things or with the still lingering morning sickness for the rest of Lent.

They surprised us, by all having an exceptionally good day.  Patch may have asked if we were done about a dozen times (mostly between the 70 minute and 90 minute mark...) but he also hollered "Goodbye Jesus!  Goodbye!  Goodbye!" when Mass ended and it was time to go.

Which was when this little guy, who'd spent the first half of Mass kissing two Shining Light Mary dolls, and a picture of Jesus with a crown of thorns from a brochure (that he cried when I attempted to put down) woke up.  Hard: 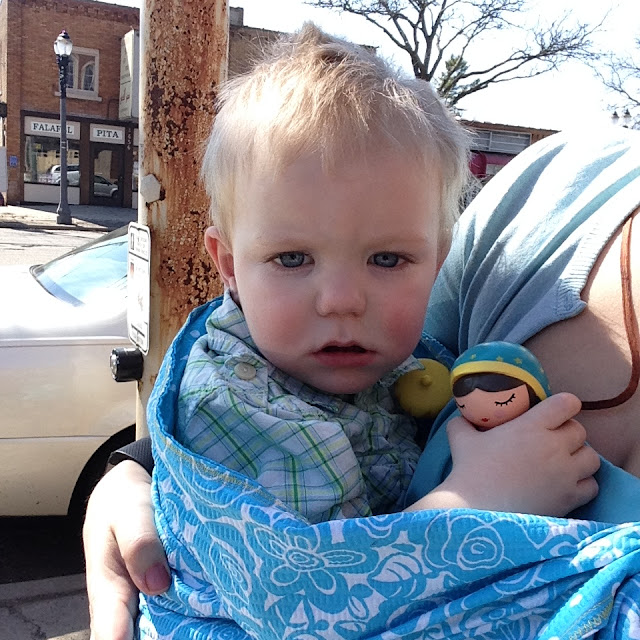 He was not ready for his nap to end.  He let me know.  Dramatically.

I told him he could sleep longer, but apparently that wasn't the answer either. 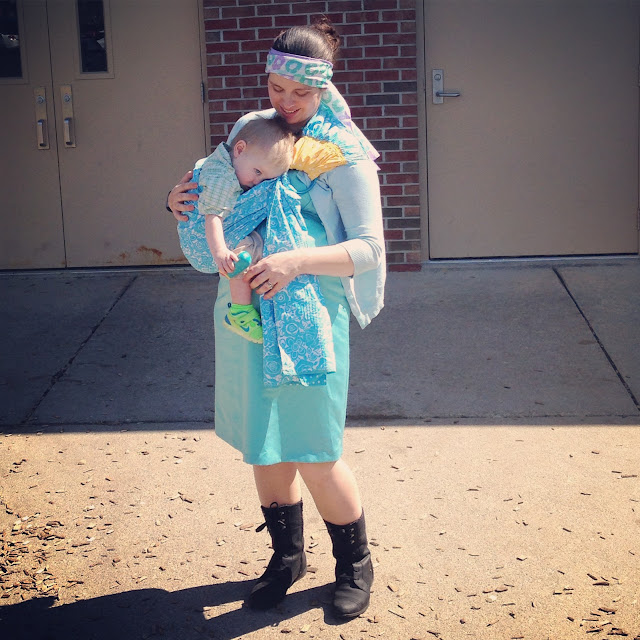 Patch and Puppy had a blast.  Although it quickly became clear that it's time for Puppy's bi-monthly bath. 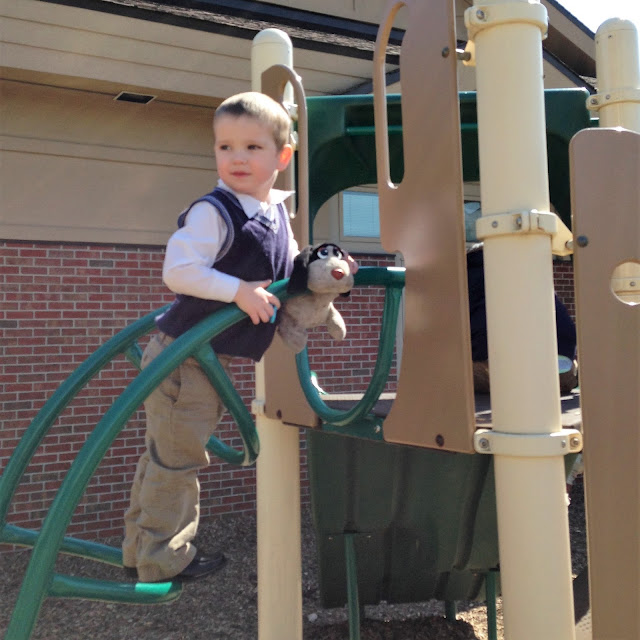 After Mass there was much playing. 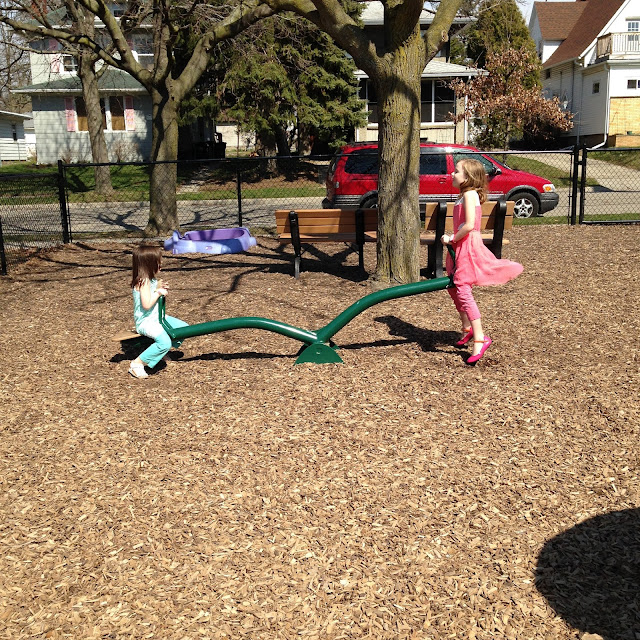 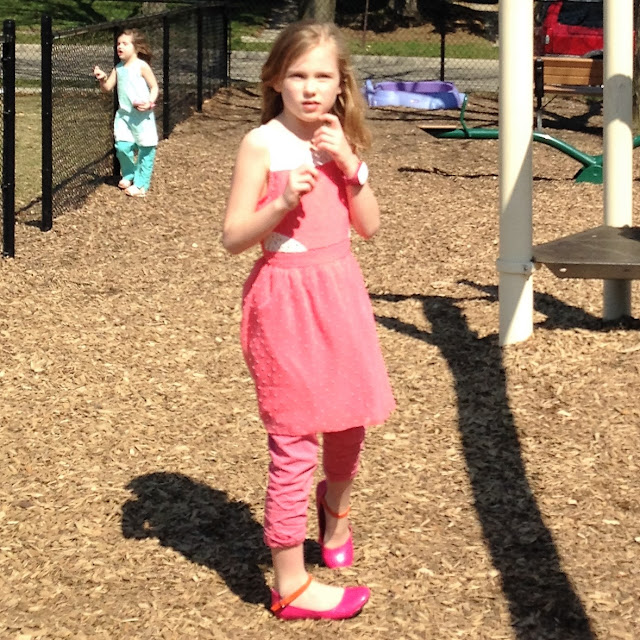 Paul snapped a picture of the last day of week 25.

I had struggled to come up with an Easter outfit that fit.  I ended up wearing a bridesmaid dress from my pregnancy with Patch, with the cardigan I was confirmed in almost nine years ago and a scarf.  Oh and some boots because heels just weren't happening.

Sadie saw my outfit and said "That's what you're wearing?!?!?!" in a horrified tone (apparently it doesn't pass the seven year old test).  Maggie saw it, noticed the crucifix, squealed "Jesus!" and hugged me. 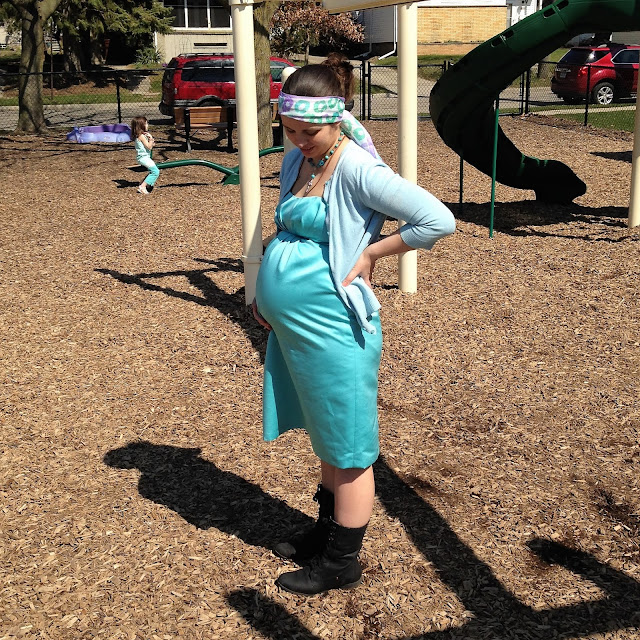 Things were better on the ground: 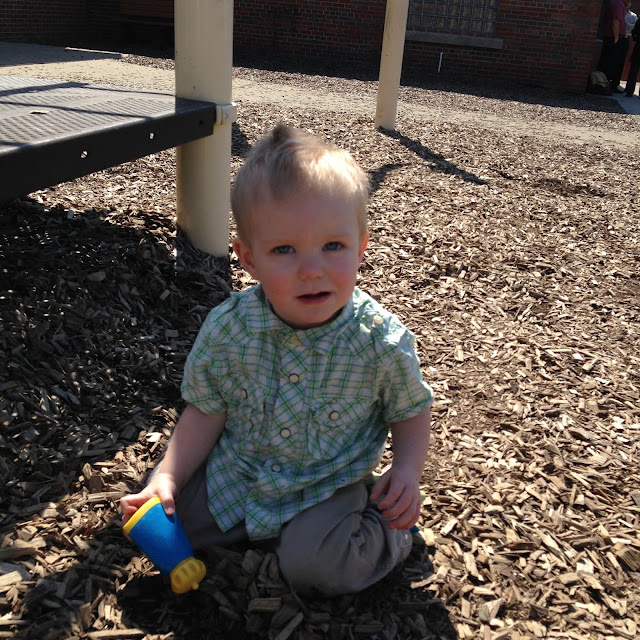 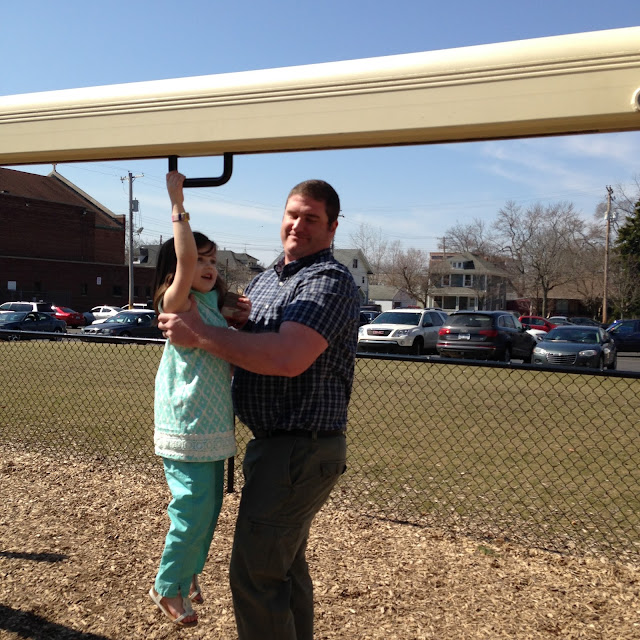 After a quick lunch we headed to a park, which was thankfully empty, and I scattered eggs everywhere and then we let the kids descend on the park for an Easter Egg Hunt.  They were pretty serious about finding as many eggs as they possibly could.  Even James got the idea.  In a matter of minutes it was over. 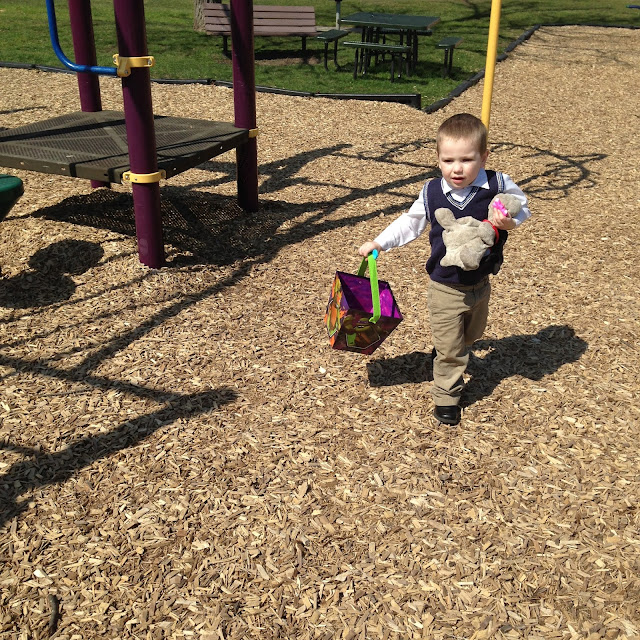 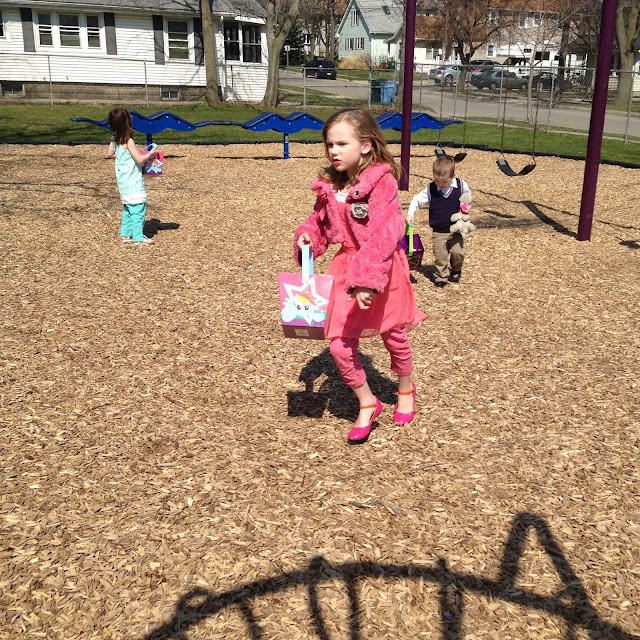 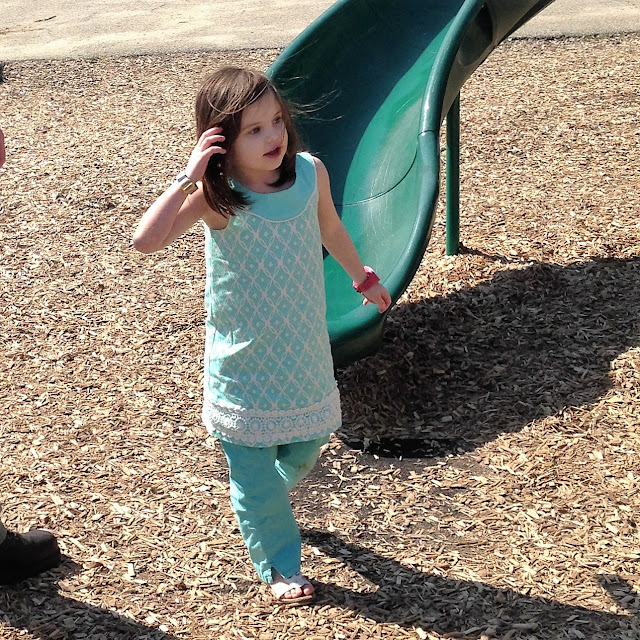 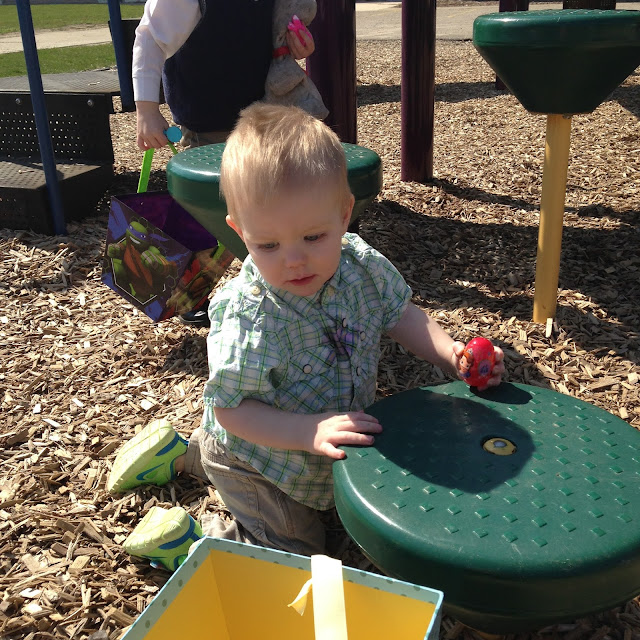 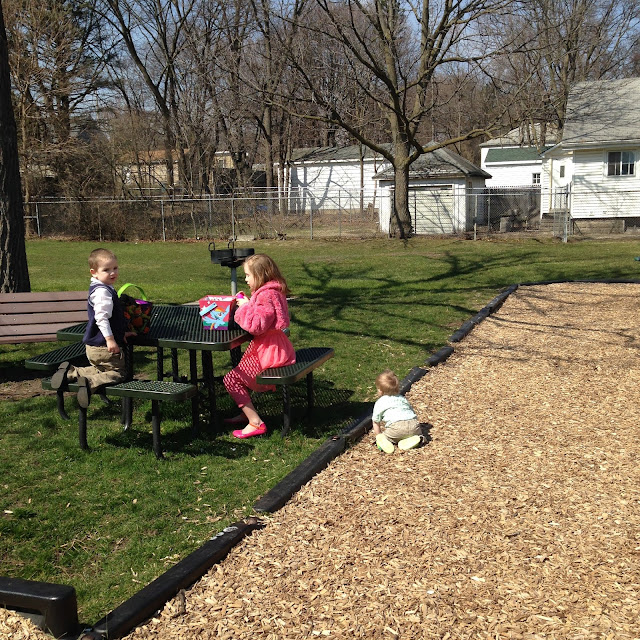 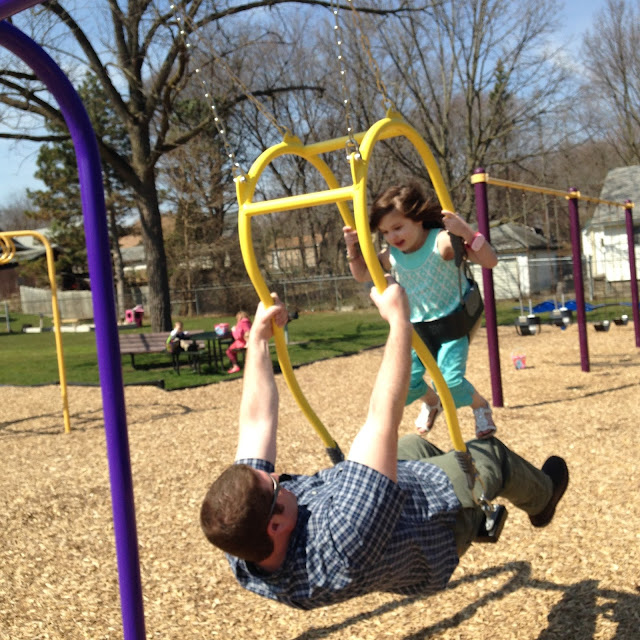 I hope you had a Blessed Easter!
Posted by Cammie Diane at 9:16 AM