Can you believe that Tessie is two?

I feel like so much has happened in the past two years so in some ways they have flown by, but that I also find myself surprised now and then that the baby of the family looks less and less like a tiny baby every day.

And of course I have to start this post by looking back. 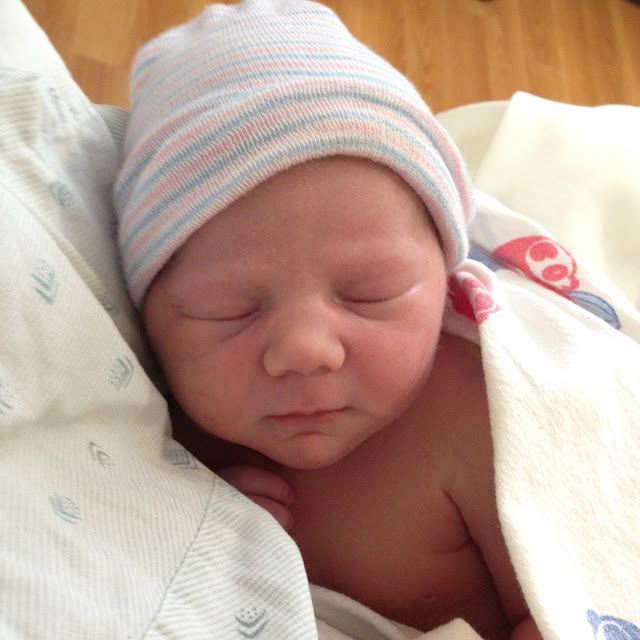 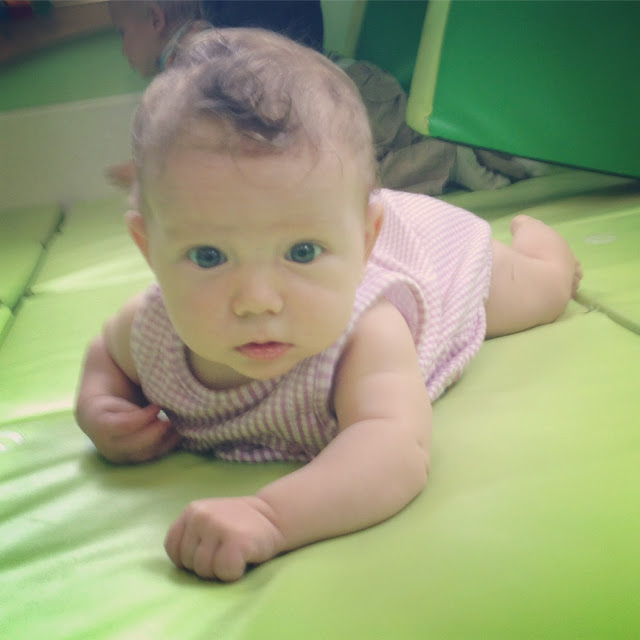 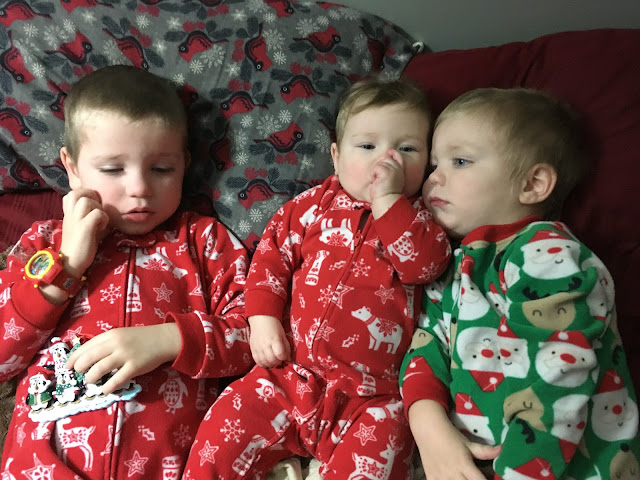 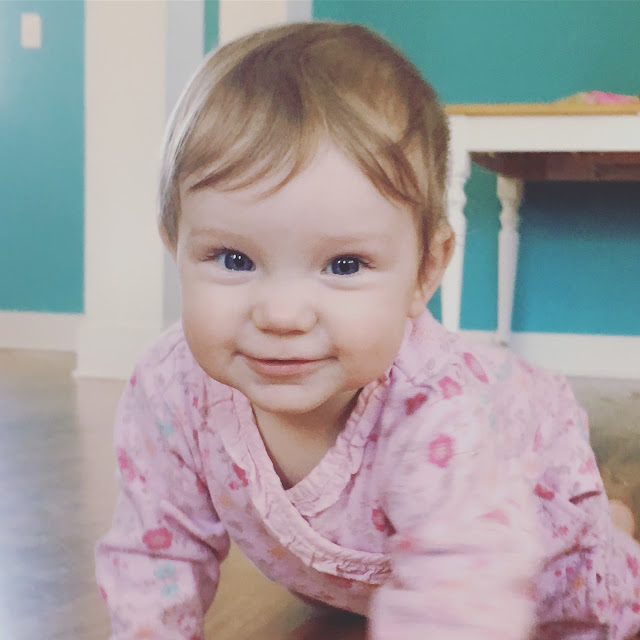 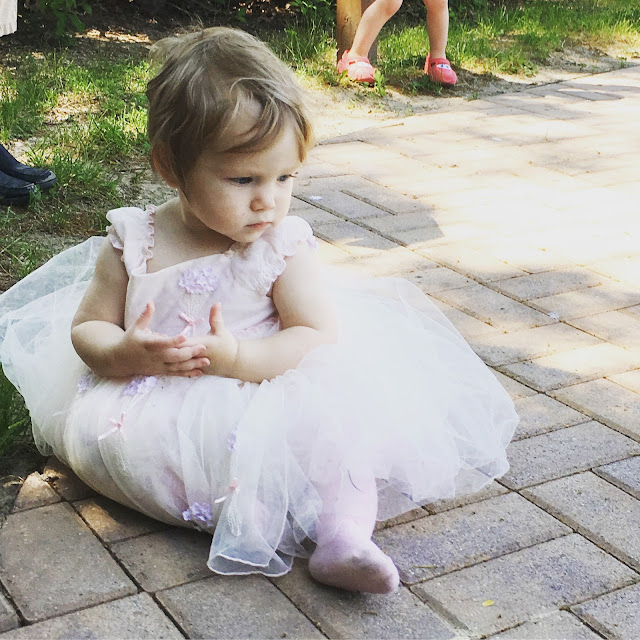 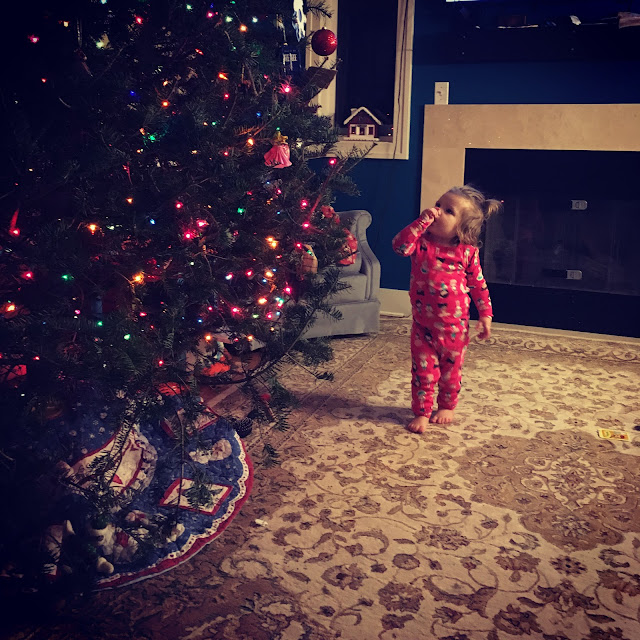 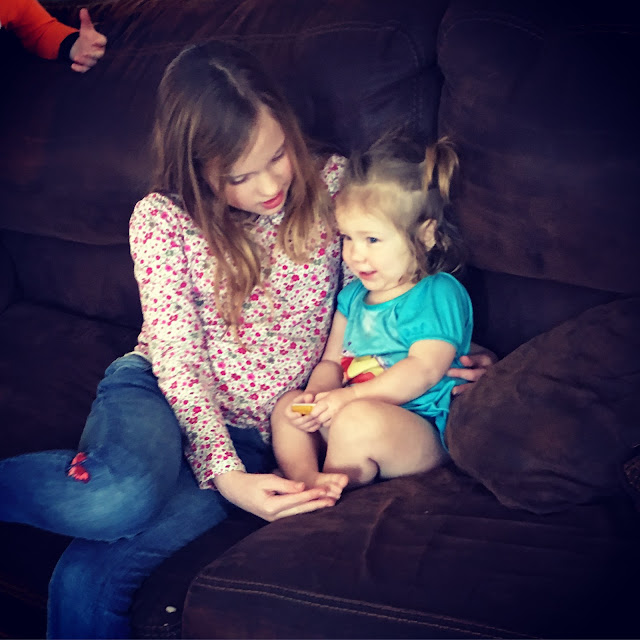 The past two years have no been easy.

Tessie has given me more scares than all the other kids put together by stopping breathing a few thousand times in her twenty four months of life.

But she's here and she's amazing and we are so fortunate to have her.

At two she has just surprised us all by learning to say "get down."

Her occupational therapist asked if this is, perhaps, something that she here's frequently (making it echolalia) and while it is, she is using it quite appropriately. She always wants to be "down" on her own two feet so that she can be where the action is.

The day before her birthday when she said "get down" I asked her if she wanted down so she could get into trouble and she replied with a perfectly timed "yes."

Her other favorite word is "go."

"Get down," "yes," and "go" aren't a huge vocabulary but she uses them pretty effectively to make what she wants known. 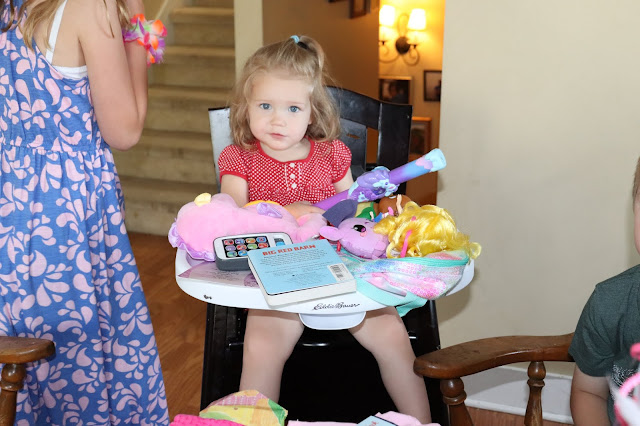 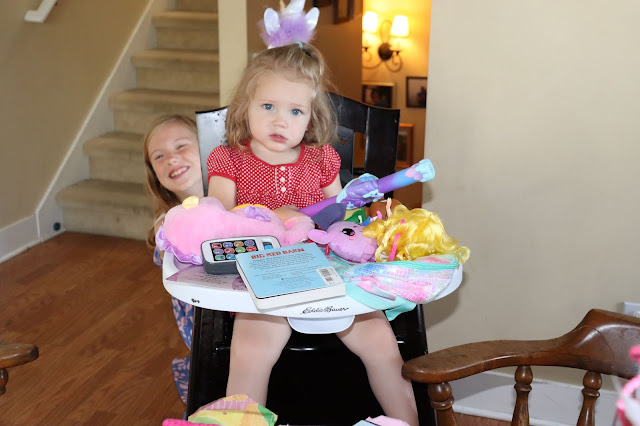 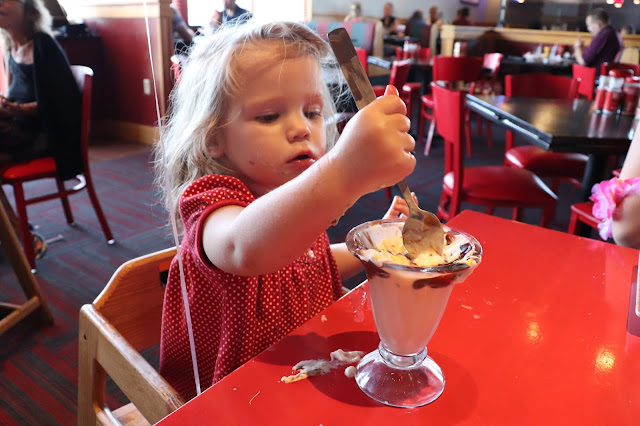 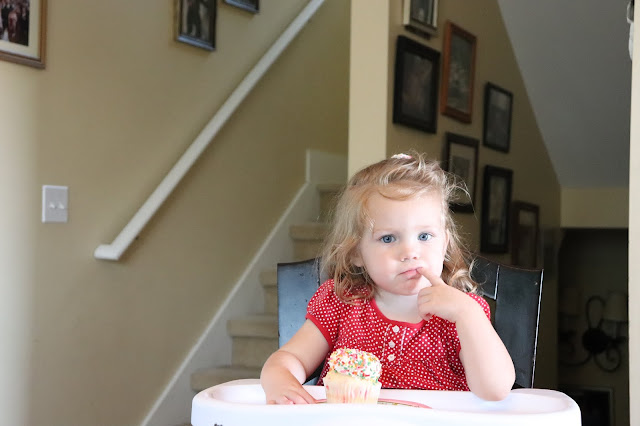 And I love being able to share these two videos of these two very special days with you guys.

And I'm pretty excited to have them to look back on too!

Posted by Cammie Diane at 1:34 PM No comments:

Earlier this week I overheard Patrick and Sadie arguing about whether or not Michigan had crocodiles in the rivers.

Patrick insisted that of course we did.

Sadie said that we don't.

And I smiled because I don't think that Sadie remembers that she was the one who started the alligator stories when she was all of four years old and she decided to tell her two year old sister that there were alligators in the rivers here to make them less appealing to a two year old mermaid.

Mermaids love water. She was always on the lookout for an opportunity to dart towards it and she would glare at anyone who suggested it was "alligator" or "shark" water. 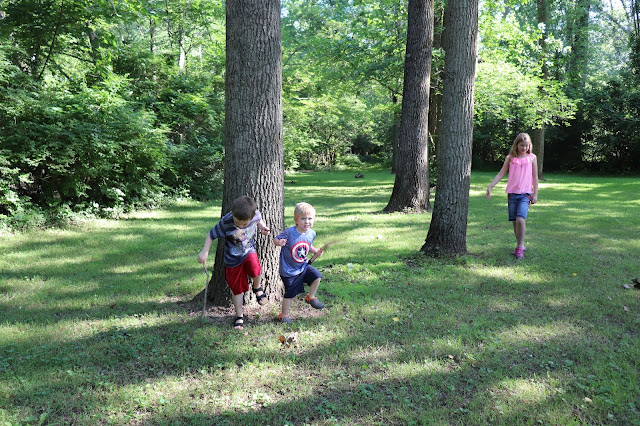 But apparently someone believed Sadie's stories.


And in some of my favorite therapy news ever, apparently Maggie set up an obstacle/gymnastic course at  therapy, on her own, and then requested that her therapist say "ready, set, swim" and then would go through it while smiling hugely.

That basically made everyone's day yesterday.

I don't think anyone can say she doesn't have a fantastic imagination.
Posted by Cammie Diane at 11:23 PM No comments:

The Day I Handed Paul a Camera

This day, and as a result this video, has so much information in it that I almost don't even know where to begin.

First off, I spill the beans and talk about how the school bus crashed into our parked car the one night that Paul got home before me and parked on the street outside our house, because he knew he would have to leave before me in the morning (but not apparently before the bus picked up Maggie on that particular day, which is rather shocking).

Did I mention I have some school bus angst? First because they let Maggie run all over the bus when that one (different driver decided not to put her in five point harness or stop the bus to rectify the situation), and then because the bus was so very late so many times (we're talking more than 10 minutes and up to 40 minutes... picking up 2-3 children), and then... this.

However I was thrilled when I saw her summer bus driver pull up and it was one of our all time favorite bus drivers who I had prayed that she would have this school year, so maybe just maybe this summer will go smoothly. I'm really hoping. 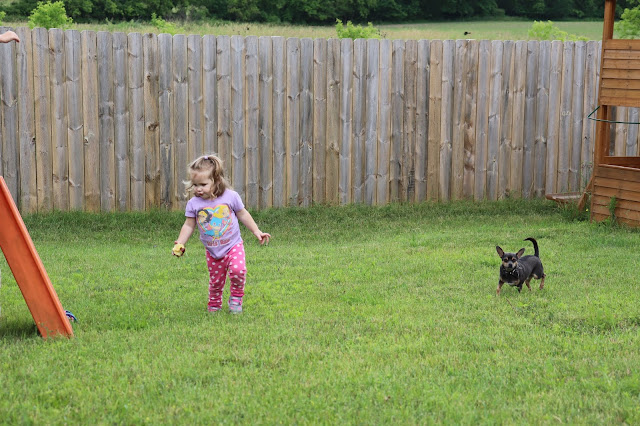 And I talk about how after seven months of waiting (okay not really waiting because I wasn't really impatient for this appointment at all) I went down to Ann Arbor for a doctor's appointment for a fourteen gene panel of testing that will look at certain genes for both cancer and autism.

That all started because I kept getting ads for the those commercial cancer tests in my Facebook feed, and I asked my doctor if they were worth it, and after going over some family history he said he didn't think commercial testing was ever a good idea but he did think genetic testing for me was worth looking into.

And that is basically how we got to yesterday, where I met with a genetic counselor and then a doctor and then sat down in a lab and they took a tablespoon of blood after answering about a hundred questions about whether or not I would be too anxious to handle life if they did find out that I had some inherited sort of faulty tumor suppressing gene. 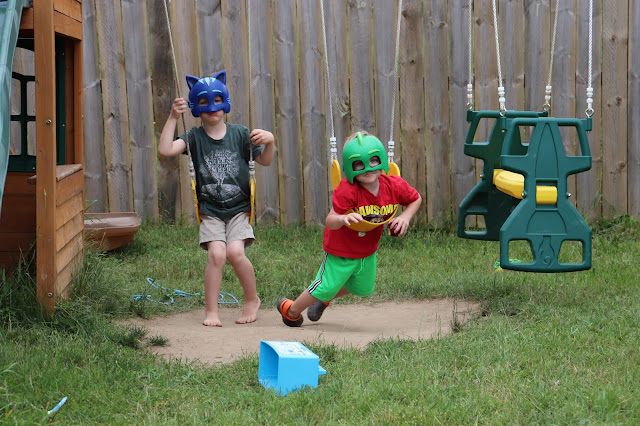 But the fun part of the day, and I feel like this is one of the funnest videos I've made (at least part of it is) was when my camera got into Paul's hands and he got pretty silly on camera, while four out of five kids all tried to pile on him at the same time.

And now my time for writing is up because he has to be at three different court houses tomorrow and it's time to turn out the lights so I can be up before the kids tomorrow to hopefully have time to proof read and add a few photos here!

About that Week Off of School

I have a rule around here and that is that I will never ever show a meltdown.

Today I do mention that we had more than a few this past week, and I can't help but sigh because the problems that I worry and stress about are nearly never the ones that actually end up being the actual problem.

In the weeks leading up to the last week of school I spent a lot of time stressing about how Maggie would react to nine days without the bus coming to our house.

On weeks when she had Mondays off, and on Christmas and Easter break we had a really tough time.

But you guys, she got summer. Totally and completely. She understood. She didn't even ask about the bus.

It felt miraculous that first day when she understood.

There was one thing, however, that she did not understand.

And it had to do with a certain younger sister getting to get up and get dressed and go to therapy bright and early every morning. 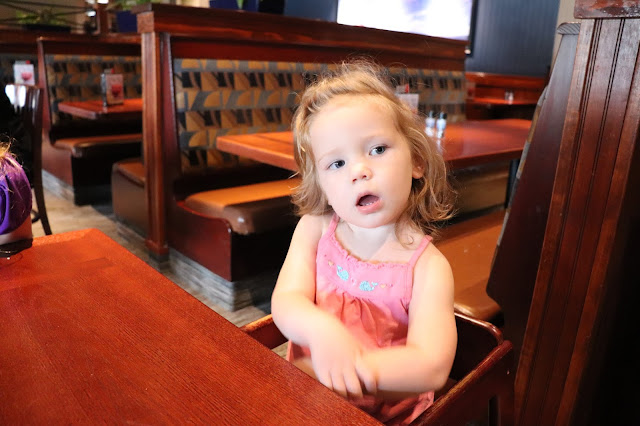 You see, Maggie has therapy in the evenings and that cannot be changed because those spots are in very high demand (I tried and was told once you have that spot if you give it up it's gone and obviously I can't do that for the school year...).

And that became a whole new problem.

We had to drop off Tessie every morning and then leave the therapy center with Maggie still in the car.

And that was one transition that became very hard every single day at drop off and pick up.

It wasn't the bus not coming. It was dropping off and picking up Tessie that got us.

Today school starts again for a certain little mermaid who is going to be extremely excited when the bus arrives at our house and life goes somewhat back to school-year-normal.

And I'm thankful that she's going to have her afternoons off before going to school in the evenings so that she has the schedule that she loves with more of a summer than she usually has. 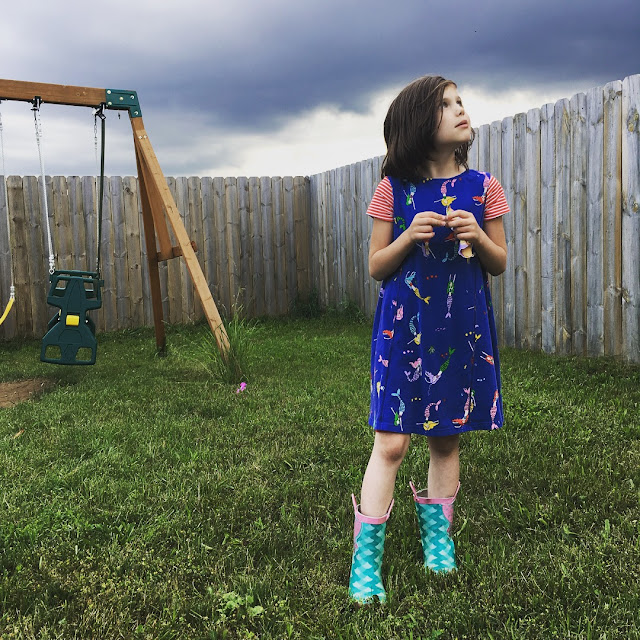 Yesterday I was sitting outside watching her play in the backyard when she spotted me.

She ran up to where I was sitting on the porch and grabbed my hand and said "Mommy up please!" and led me down to the grass and had me sit on the swing next to he with an occasional "Mommy push please" (although she seemed to be getting higher on the glider without me) and then lay with me on the grass and watched the birds while she told me "Birds say tweet tweet" and she pointed out the fact that we could see the moon and the sun at the same time. 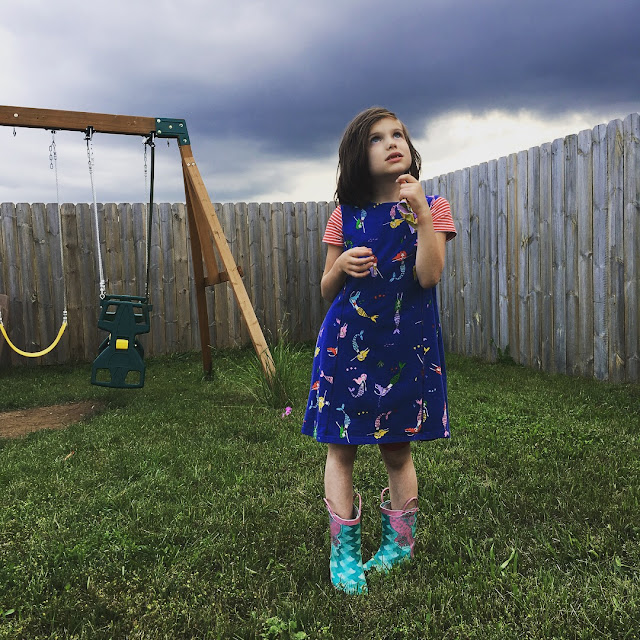 Books and videos and anything involving the planets aren't quite mermaid level here, but they come in a close second.

And then the clouds rolled in rather quickly, because not long before she started saying "cheese" we had blue sky with some light fluffy clouds.

We managed to read a few more Bubble Guppy stories on the Kindle app on my phone before the skies opened up and we ran inside before the first rain drops hit the ground. 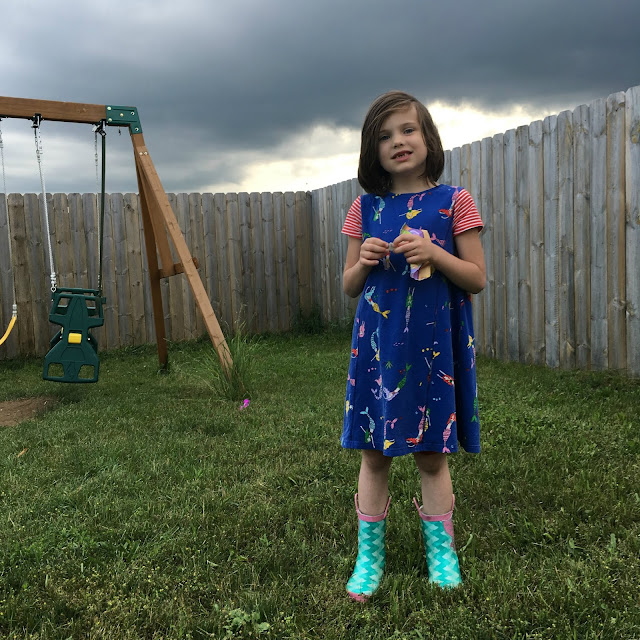 Maggie is a huge fan of the Bubble Guppy books on the kindle fire app. She is hard on books but she can't accidentally, or not accidentally (stimming) hurt those books.

And she can swipe back and forth and they're still totally fine.  Which is great. 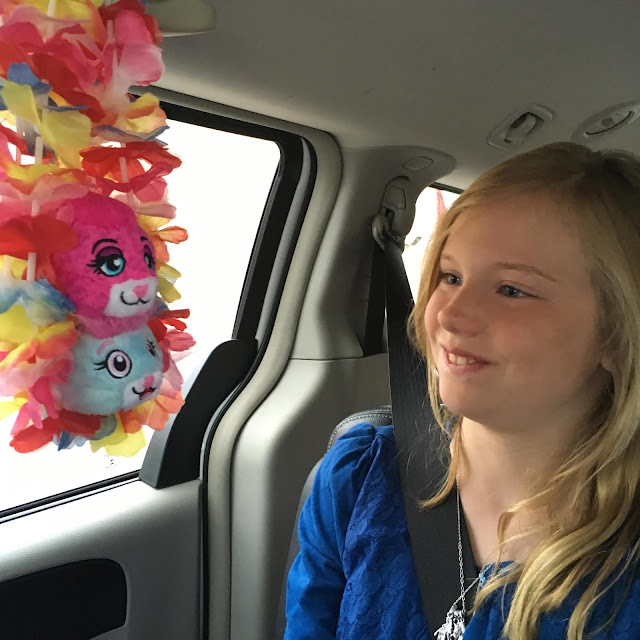 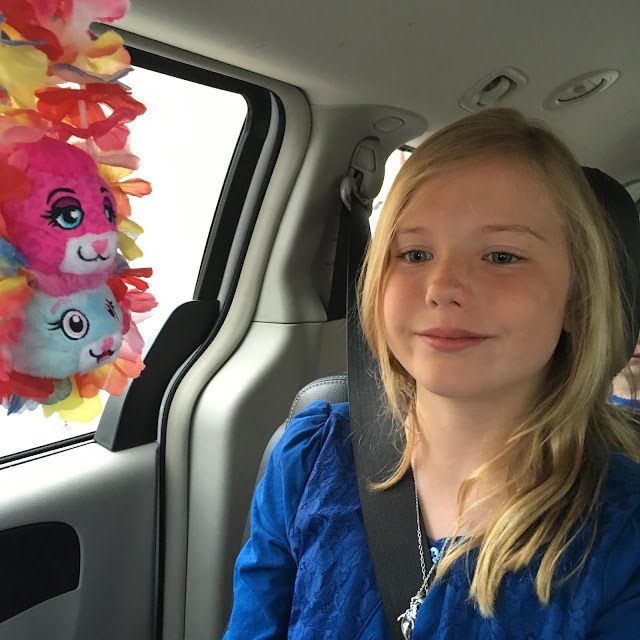 Sadie is enjoying being ten, a lot.

And last night she announced that we've really waited too long to start some sort of math summer program, so if I could get on that ASAP, it would really be a good thing.

Apparently when she got to her new school she was ahead at math and she wants to make sure she stays ahead.

The night before her birthday we always take a walk and a couple of years ago we snapped this picture: 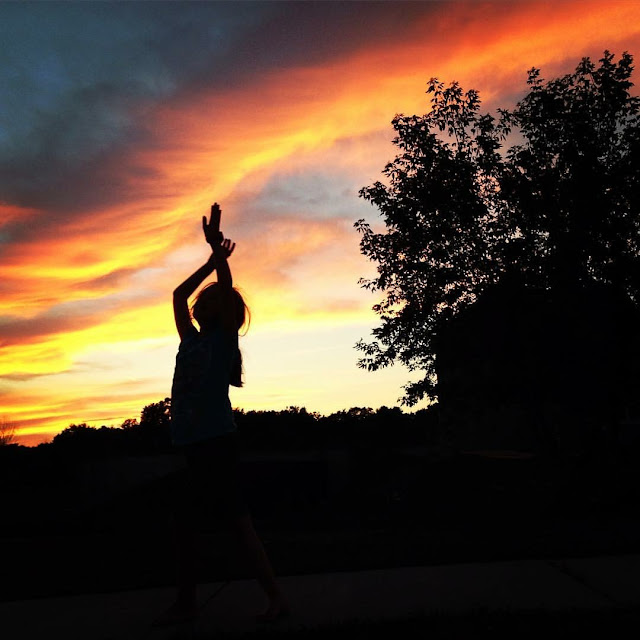 Last year when we had a beautiful sky the night before her birthday we decided to try to make it a yearly thing and we did it again: 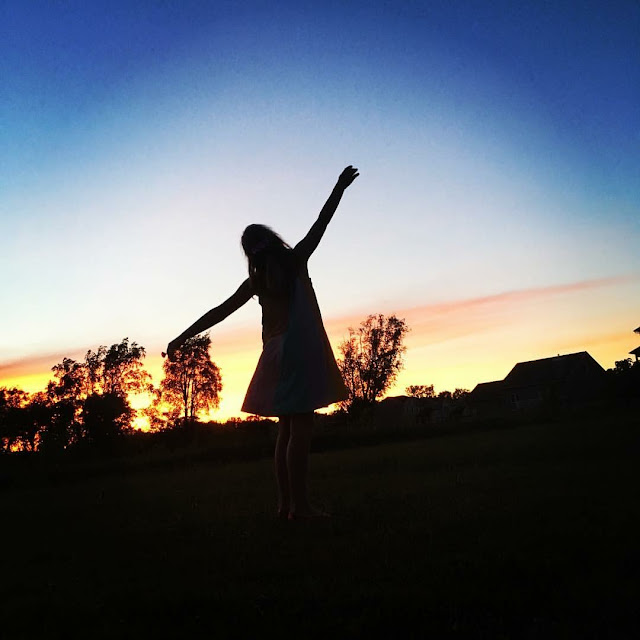 This year the sky absolutely was not cooperating and did not have a hit of any color other than gray and when I snapped the picture you couldn't really see Sadie against the backdrop. So I threw in some of her favorite purples and she loved the photo although it wasn't quite as natural. 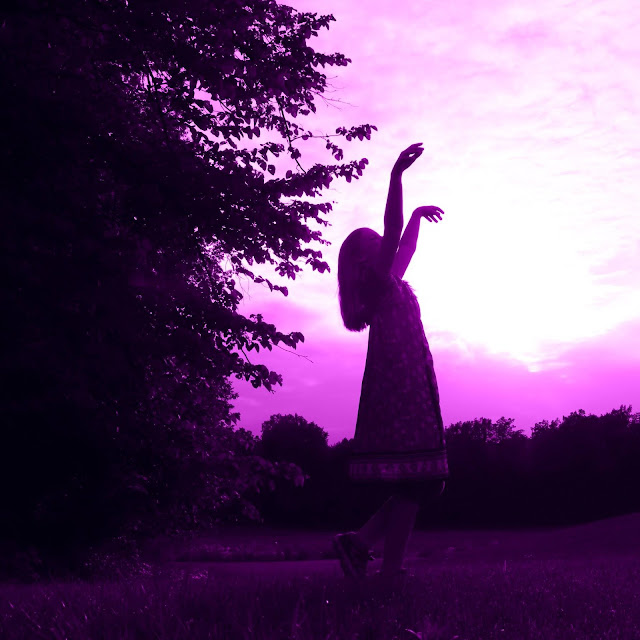 Also, as the development we live in has grown there are now two new houses in the empty field where we took that first photo which was kind of fun to walk by and see on our way to the spot where we took this one.

And now we are only a few days a way from a certain still-one-year old's birthday. 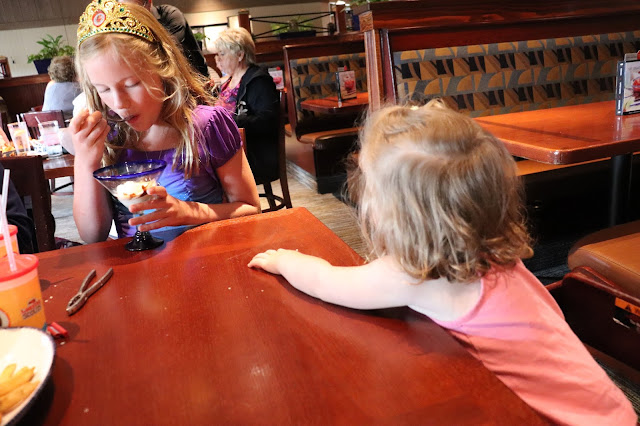 And she is definitely ready for it to be here turn.

Don't worry. She was eating cake a very short while after this photo was snapped and because of sensory issues she is not every very successful with ice cream. But that doesn't mean she doesn't love the idea of ice cream.

And that is my belated Sunday Update!