The last couple of weeks have been intense, between the appointments that we already have, and Tessie's appointments, the calendar has been packed.

On the Monday after I wrote my last post, Tessie, Sadie and I made the hour and a half drive north to the children's hospital that she had been referred to, to see another pulmonologist at the hospital's pulmonology and sleep clinic.

The doctor was not happy that Tessie had not been put on a monitor for the month leading up to the appointment, since that was the first recommendation that the previous sleep center doctor had made.

She said that if she had seen Tessie when she was three months or five months old, when she was struggling to make eye contact or track with her eyes, she would have been afraid that she had the gene PHOX2B, and that yes, the treatment for that gene generally requires a tracheotomy and a ventilator, but that now, with all the progress that Tessie had made she was nearly certain that wasn't what we were looking at.

She immediately put in an order for a monitor for Tessie to wear while she slept and she ordered a sleep study, coding Tessie's chart as red, which meant that the call from the sleep center came as soon as I arrived at home, and they squeezed her in for an appointment the next night. 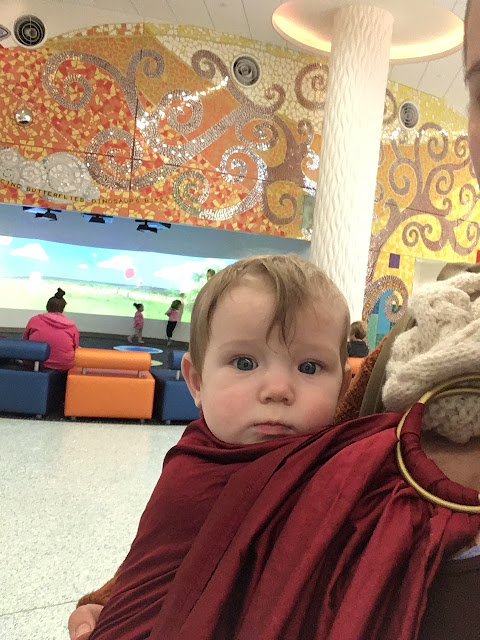 We arrived at the children's hospital and crossed the sky bridge and sat and watched a rainbow bubble wall bubble, and a giant projection screen explode with fireworks as the other kids who had come from further than we had waited for their names to be called.

I have to say if you have to get a sleep study done on a baby, and there is anyway to go to a pediatric facility, I would recommend it.  It was so much easier than it had been at the other sleep center or at the PICU.  The sleep study tech quickly hooked her up, and when the nasal canula was too big for her tiny nose he actually pieced a custom canula together and twisted the wire around it that would feel her breath before carefully taping it in place. 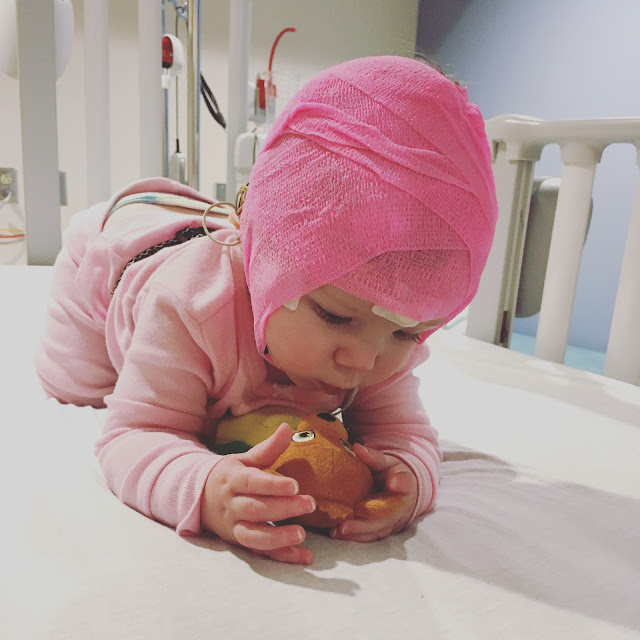 It was a long night.  Tessie was furious about the wire that needed to hang down in front of her mouth, because every single time she tried to suck her thumb it would touch her hand.  Inevitably screaming would follow.  But she finally slept for a few hours, waking every hour from midnight until four, before drifting off for two more hours until it was time for us to wake up.

When it was time to wake up she repeatedly rolled over and tried to go back to sleep by burying her little face in the mattress.  But once she was unhooked she was fully awake and we were ready to be on our way. 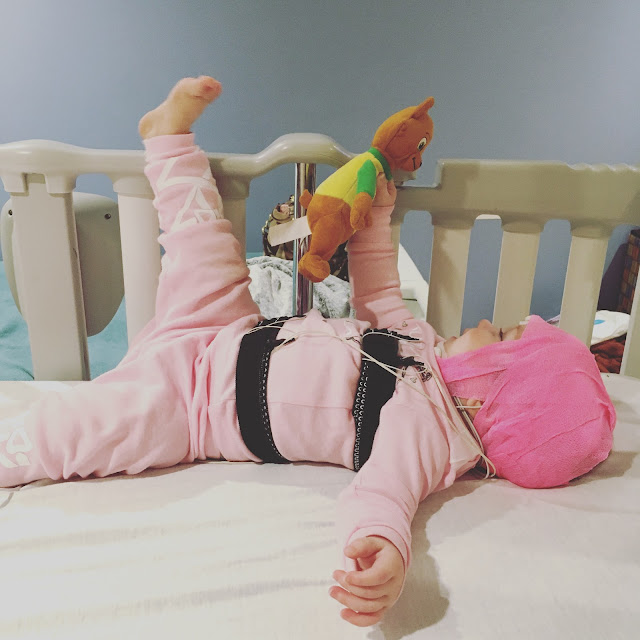 We drove back to meet Maggie at her early morning speech and OT and then take her to "mermaid school."  And then we settled in to wait.

The sleep monitor arrived.  The first night her oxygen dipped a few times, but was otherwise normal. The second night the alarm didn't sound once.  The third night she stopped breathing around fifteen times, although I can't be totally certain because I lost count after the twelfth alarm.

Fourteen of those times the alarm woke her and she started breathing on her own.  Once it didn't.  I was laying in my bed, staring at monitor, which had gone off twice in the previous hour.  I saw the respirations per minute slowly tick down.  8, 7, 6, 5, 4.... "Tessie!  Tessie!" I said as I started to sit up.  3, 2, 1, 0.  The alarm sounded.  It kept going off as I scrambled over to her and rubbed her still little back hard until she gasped and started to breath again.

That was a long night.  But it was followed by night after night without incident. 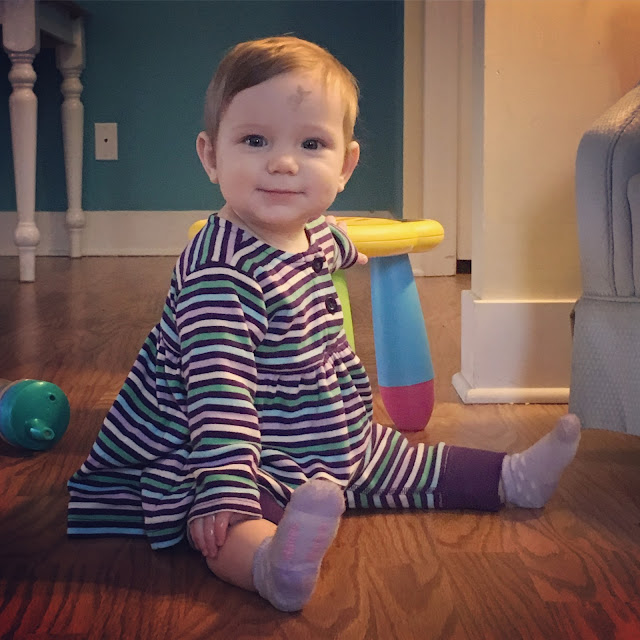 By the time that the call came, a week after the sleep study, on Ash Wednesday, I was almost convinced that she didn't have central apnea.  Had I put the sensors on wrong that night?  I'd taken them off twice and reapplied them, but with a few good nights in between I was beginning to doubt what I'd seen with my own eyes.

Which really is the theme of the last month.

I knew I had seen her stop breathing a half dozen times.  But had she really stopped breathing or was her breathing just extremely shallow.  Half of the doctors that we saw believed that something was going on.

Half told me it was probably shallow breathing and that the first sleep study, which showed 45 central apneas, 3 obstructive apneas, and over 130 hypopneas, was just a fluke. One doctor told me that the "story I was telling" didn't match the baby he was seeing.  A nurse repeatedly said "I don't know why we have a healthy baby like you here...", later asking me if our time in the PICU had felt like a vacation because I have all those kids.

The answer was that it absolutely wasn't a vacation.  It was terrifying.  And I was even more afraid to take her home without a monitor, which I repeatedly asked for and was denied. 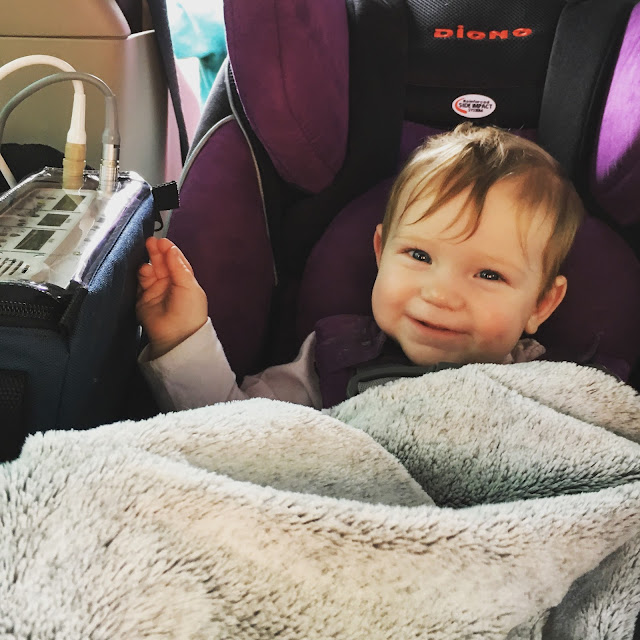 I really, really liked just about every person who worked with us and helped her, and by the end so many people had so confidently told me that nothing was wrong, that I doubted that instinct that kept telling me to push on until we were absolutely certain that she wasn't going to stop breathing again.

Even the doctors who had seen her before believed that it was over and that I had nothing else to worry about.  I knew that they were more of less humoring me when they sent her for a second opinion.  She had been fine in the PICU.

Except in the PICU there were alarms.  I tried to point our the flaw in our two nights of tests.  She had had a band around her chest monitoring her respirations.  Every time it dipped below ten an alarm sounded.  It sounded until she started breathing again.  It sounded every few minutes all night long.

A vacation, I thought?  On your vacations does a piercing siren wake you up every five minutes all night long?

I asked if the alarms could possibly have been the reason that she didn't stop breathing.  I was told that she hadn't woken up all the way, so that couldn't be it.

After watching how the monitor rouses her just enough to breath again without completely waking her, I believe that that was a huge error. 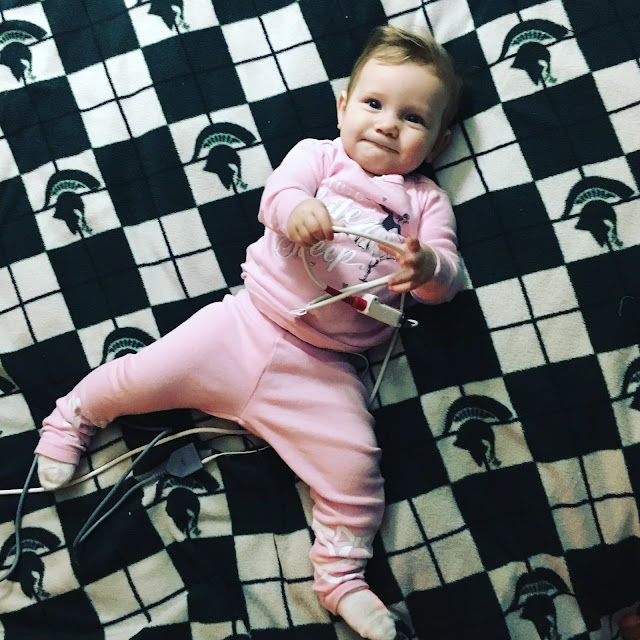 A few days ago I got the call from the sleep center.  I hadn't expected it.  They would only call with abnormal results and the doubt had been creeping in.  I was beginning to doubt what I'd seen with my own eyes again.

She had had 38 central apneas and 7 hypopneas this time.  Her oxygen level only dipped into the 80s this time, not the seventies.  But she has central apnea.  She had needed that monitor and what I'd been witnessing really was her not breathing for more than twenty seconds at a time.

She now wears a monitor when she naps and at night and when we drive in the car.  Yesterday the alarm went off in the car and continued to sound until she started breathing again.  In two weeks we go back to the same children's hospital for an MRI.  Usually central apnea indicates a problem with the brain stem, so her neurologist would really like to take a look at it to see if that's the root of the problem. 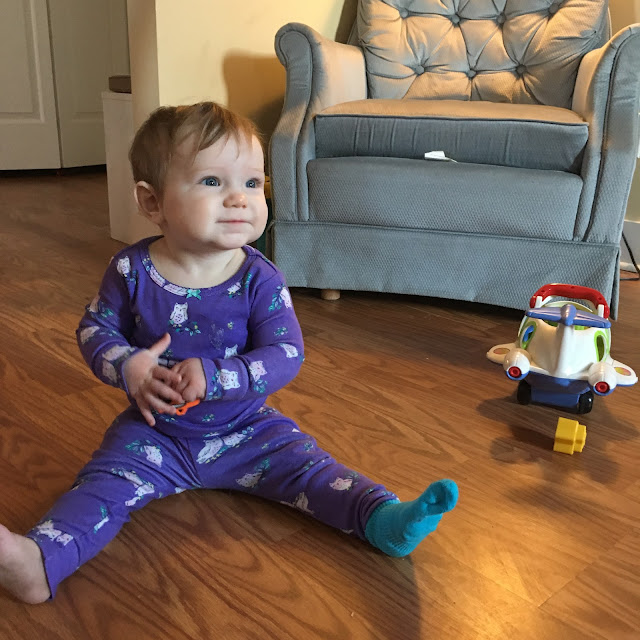 And I am a jumble of emotions.  Initially I was relieved. I was afraid that if the sleep study didn't show anything they would take the monitor away and I would never sleep again.  But at the same time central apnea is a frightening diagnosis, as I was repeatedly told in the PICU, and I hadn't realized how much I was relying on that doubt, and the hope that maybe she didn't have it, to get through the days without a monitor.

"The thing is," one nurse told me after they were certain the first study wasn't accurate, "babies with central apnea will eventually have an 'event' where they stop breathing and don't start again."

Those words keep going through my mind.

I asked the respiratory therapist who called with the results if the improvement in this study compared to the last showed an improvement in her condition.  She said that it might, or that it might just mean she had a good night.  I'm thankful that if she was going to have a night with apneas that at least it was a night while they were doing the study.

So now we wait for the next test and keep lugging her little monitor around with us.  We also wait for another retest on the organic acid test, which for a second time was deemed inconclusive. 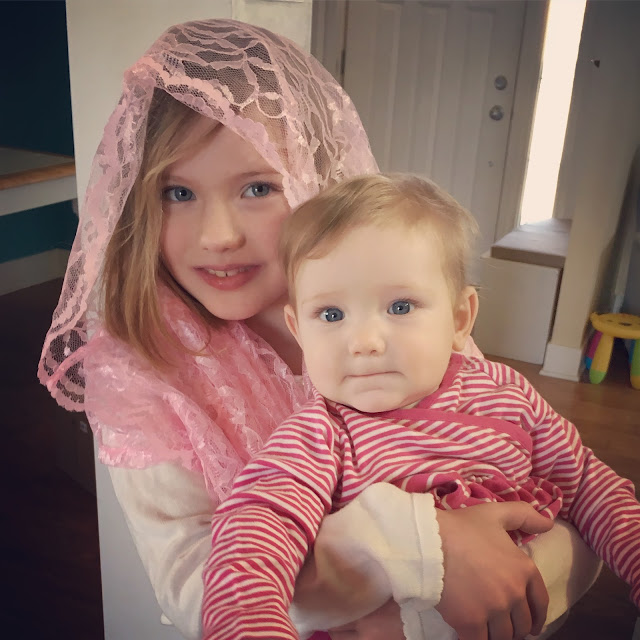 Now for a change in direction.

The best moment in the last few days came on Thursday.  James' physical therapist hadn't seen Tessie since before Christmas.  She'd been the therapist that first suggested testing for Tessie, and she had been one of two therapists that evaluated her.

When she arrived yesterday Tessie was sitting next to the fire place but quickly raced across the room to greet her.  After watching her she said that she could not believe the improvement.  She said that in her entire career she had never seen a baby go from the condition Tessie had been in at her evaluation, to the condition Tessie was in as she raced around the room interacting with everyone and smiling widely. 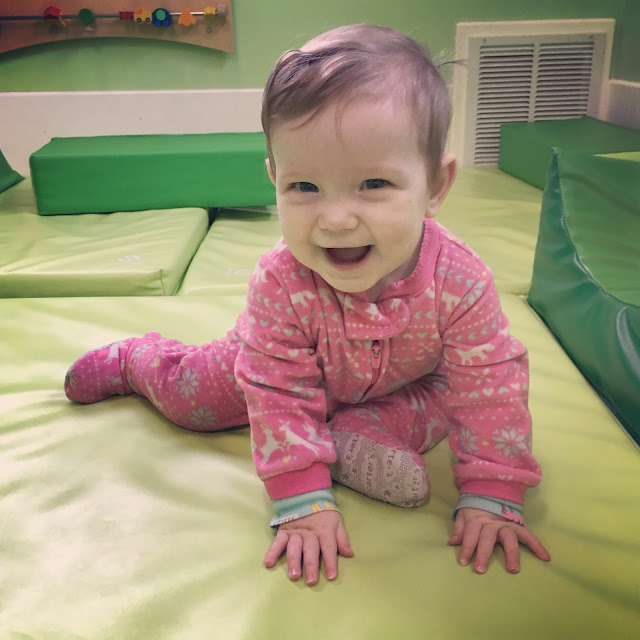 And hopefully I'll have some good news soon to match our smiley, sweet girl.
Posted by Cammie Diane at 11:46 AM