I should probably begin with a disclaimer that I should have put into my last post.

Most of the staff at the hospital was amazing when we took Tessie in last week, from the triage nurses, to the ER nurses, to her nurses, the nurse assistants, and the students that spent hours in our room with her.  And three of her doctors (out of five) were fantastic trying to work to figure out what was going on.  There are basically two people from that stay that I am incredibly upset with, but by and large I was impressed with almost everyone we saw last week.

When the hospital called to ask how the stay was I gave them five names when they asked for people who had gone above and beyond.

Still, going back to the ER was the very last thing I wanted to do, ever again.

On Wednesday I was at the lake with the four other kids while Maggie was in therapy.  I'm not quite brave enough to bring all five of them together.  I took Maggie last weekend and we had a blast, and while I'd only planned on taking the other four kids to the splash pad, we ended up down in the lake with three enormous popsicles the kids had somehow convinced me to buy (Tessie thankfully isn't quite big enough to demand her own popsicle yet).

We were headed up to the playground to give everyone a chance to dry off before getting into the car when we heard from one of Maggie's all time favorite therapists.  She was calling to let me know that during the middle of a session Maggie had started giggling and then had stopped responding while her eyes darted back and forth in her head for close to half a minute.

Maggie seemed fine now, a little tired and slower at doing her work, but they'd just wanted to let me know what was going on.

My phone went dead less than a minute later, and so we scrambled back to the car and plugged it into a charger and waited for it to turn on so that I could call her pediatrician's office.  I left a message on the nurse line and hung up, turning the car towards the therapy center since Maggie's day was almost over anyways. 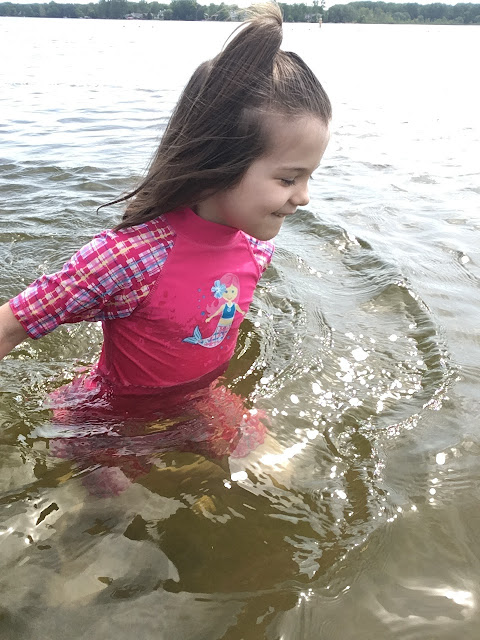 The nurse called me three minutes later.  My favorite nurse. The one who suggested that Tessie had apnea a full three months before anyone else even suggested the correct diagnosis.  She began by telling me that if there was ever an emergency to call the front desk and ask to be put through to the nurse since it could have been an hour between anyone checking the messages.  "Is this an emergency?"  I said.  Honestly after the last week I wasn't sure at all what counted any more.

She asked a few questions and said she'd call back shortly after talking to the doctor.  A few minutes later she'd kept her promise and I had my instructions.  As a one time thing the nystagmus wasn't that concerning.  If it happened again she needed to go straight to the ER.

I needed to call her neurologist, which I'd already done, and leave a message there.  I explained that I had, but that I'd called them too because they called back days before neurology did.

We watched her carefully all afternoon and evening until she went to bed. 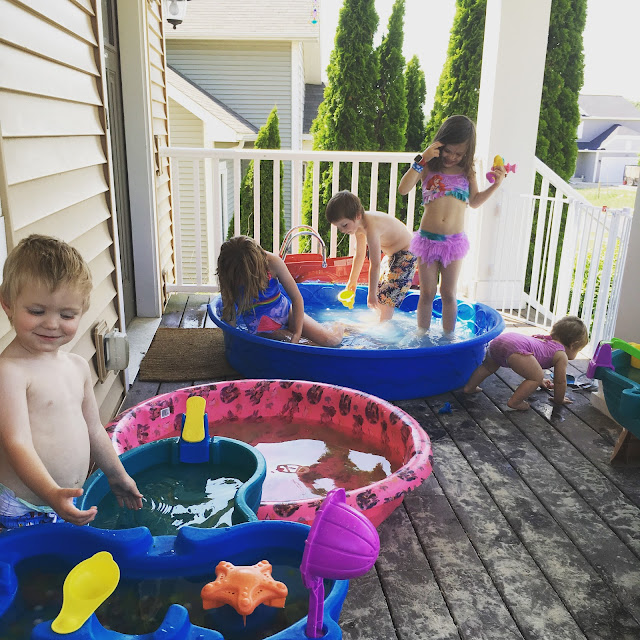 And honestly when Sadie called me and said "Mom you need to see this" I was thinking "what did she get into" and not that something had happened.  When I saw the dark dots on the carpet I didn't think blood.  I tried to figure out if she'd somehow smuggled a chocolate bar into her room.

Then I saw her face, covered in blood, with blood dried in her hair.  She'd obviously had a bloody nose.

Now without what had happened the previous day this wouldn't have worried me.  Kids get bloody noses.  Maggie has had exactly one in her life, when she and the hound dog bumped faces and their noses hit.  This was the first one, without apparent cause.

Following what had happened the day before I was slightly panicked when I picked up the phone and called her pediatrician's emergency line.  Waiting twenty minutes until the office opened just didn't seem like a good idea.

I winced when the answering staff told me which doctor was on call.  It was Patch's old doctor, the one who told me that Patch couldn't have allergies (when he did) because babies can't have allergies.

He called back and told me that it was highly unlikely that the two events were in any way related, and told me how to care for a bloody nose.  Then he said that if I hadn't spoken with her neurologist by night time to call back, and that if an episode like yesterday happened again, to go straight to the ER. 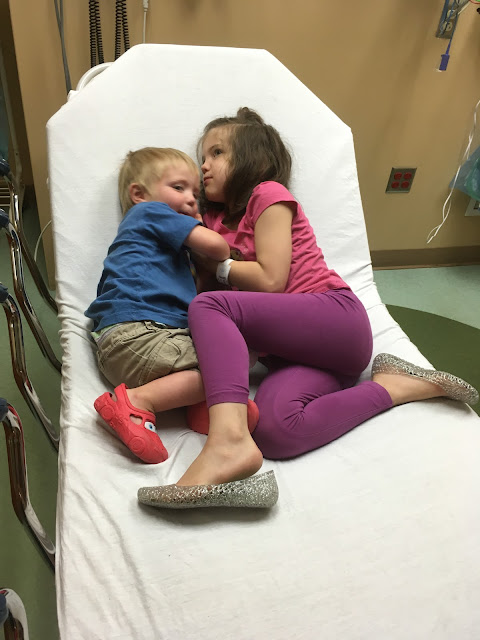 So we took her to therapy.  I felt safer with her there, with eyes on her at all time, than I would have if she was running around at home.

I called the neurologist's office and using the suggestion the nurse from the other office gave me asked to speak to a nurse or resident instead of being put through to the answering machine I'd left a message on the day before.

The neurology nurse thought that it sounded like she'd had a seizure the previous day, and a seizure during the night.  He couldn't say for certain, because her last EEG had been normal, but he'd be passing the information on to the doctor immediately.

We were at the gym, where the kids go to a play area they call "baby school," when the call from her neurologist came.  He went over everything that had happened, ordered an EEG, and told me to take her to the hospital if it happened again.  If it happened again he would have her admitted for an emergency EEG.

During the conversation I discovered that he hadn't heard that Tessie had been admitted to the hospital per his letter, and I begged him to pull her chart and look at the half dozen abnormal results that I'd received from the lab since she'd been home.

It was after lunch time when I heard that Maggie had had another twenty seconds of being totally unresponsive.  She's been sluggish all day long, but during this span of time she just stared off into space and couldn't be snapped out of it.

I called the neurology office back.  The nystagmus hadn't occurred, but she had been totally unresponsive.  Take her to the ER they said. 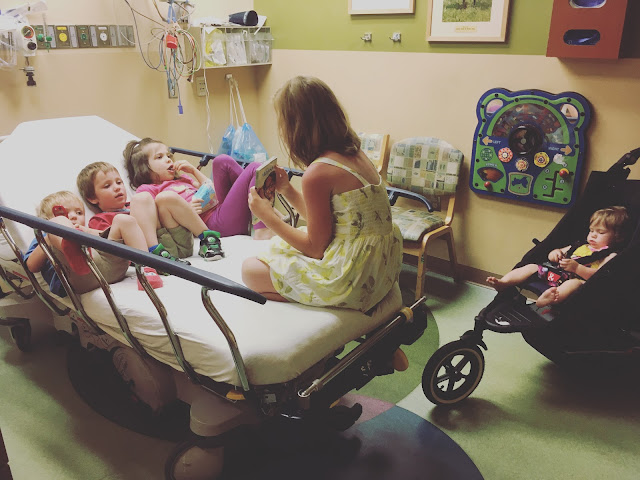 So we went.  Paul was in court and after last week I wasn't about to ask him to take more time off.

Maggie's amazing therapist who was more than an hour away headed over to help me wrangle and I offered milk shakes to anyone who didn't act like a tornado while we were at the hospital.

We trudged into the ER, Maggie and James in the stroller, Tessie on my back, and Patch and Sadie leading the way.  I breathed a sigh of relief when we made it out of the crowded grown up ER into the pediatric ER.

We filed into triage and explained what had happened and then into a room where we told the ER doctor what was going on.  He called neurology.  He tried to get a hold of her doctor.  And he couldn't.

He did get a hold of his office partner.  The same one from last week.  Can you guess where this is going?  Because I did.  I was back in the room praying he got a hold of her doctor and not the other doctor.

The ER doctor came back into the room and explained that he had gotten ahold of my least favorite neurologist on the planet and that she was sending us home with a prescription for Diazepam, to be given if a seizure lasted over five minutes, with instructions to come back if we had to give it to her.

What if she had a shorter seizure?  I asked.  What if it was only two minutes?

Just write it down and make a note of it for the next appointment.  I was handed a paper that said to make an appointment with the office partner, and the words "that's never ever going to happen" slipped out of my lips. 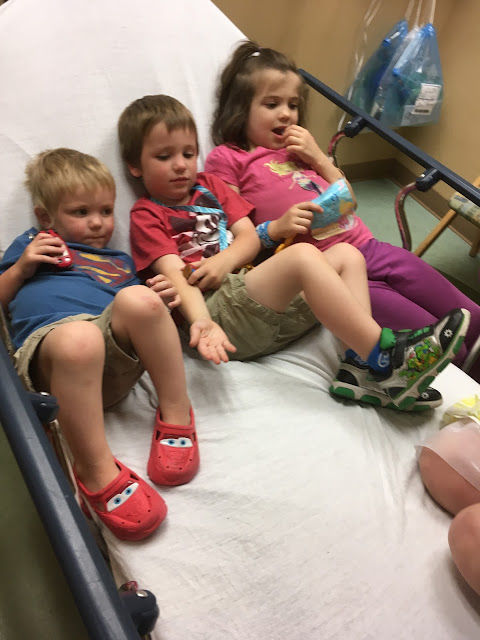 I called her therapist who was still on her way and told her the news, and that we were going to be headed home with the Dizepam.

When her neurologist retires we'll be going to Ann Arbor or Grand Rapids.  I will never willingly have a child seen by that other doctor after these two experiences.

So we went home with a child who'd likely had three seizures in the previous twenty four hours, feeling sick to my stomach as I filled her prescription.

And so now we wait and watch her.  Hopefully I hear from the office to schedule the EEG very, very soon.  Tessie has her follow up today, with Maggie's actual pediatrician, and I'm going to be filling her in and making a follow up appointment for Maggie there as well.  And adding Diazepam alongside the epi pens that come with us everywhere, while praying that I don't have to use it.
Posted by Cammie Diane at 7:00 AM