The day Sadie had been waiting for for so very long finally arrived.

After years of dressing up and pretending and hoping a priest would mistake her three year old self for a seven year old: 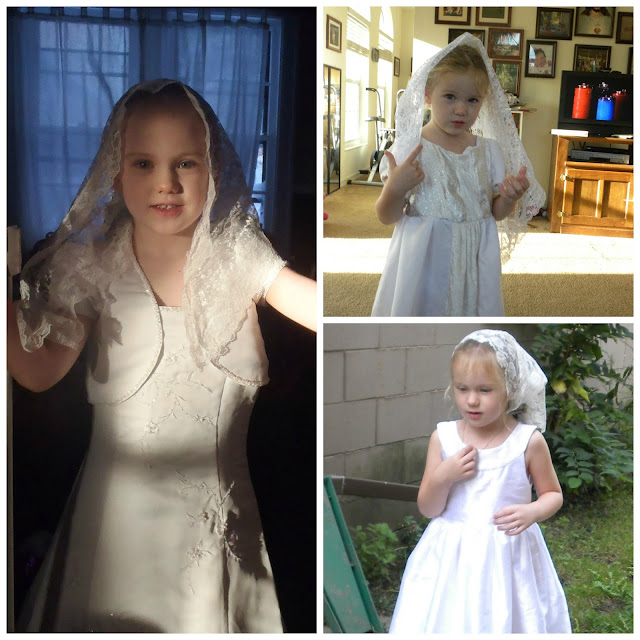 It was finally time: 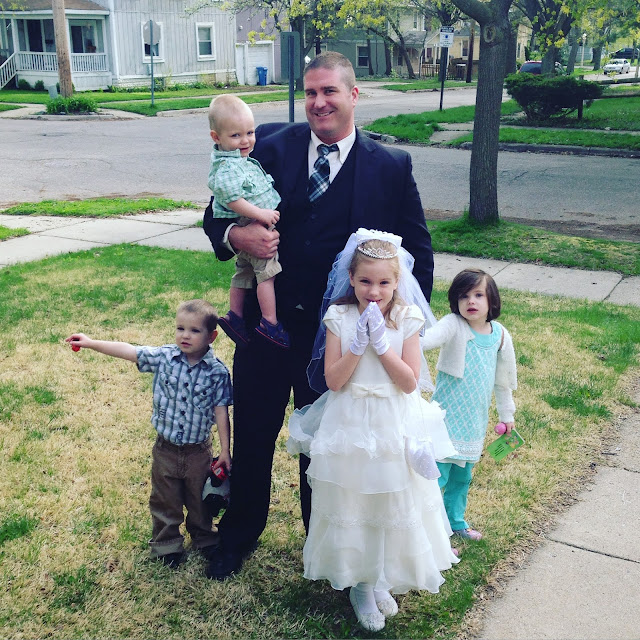 The siblings were somewhat less excited.  Especially Patch who informed Sadie, when she told him that today was her first communion, that it wasn't, that they were going to see her in a ballet instead.  Then he tried to convince me that he was "ready for Jesus!" by telling me that he was a half dozen times. 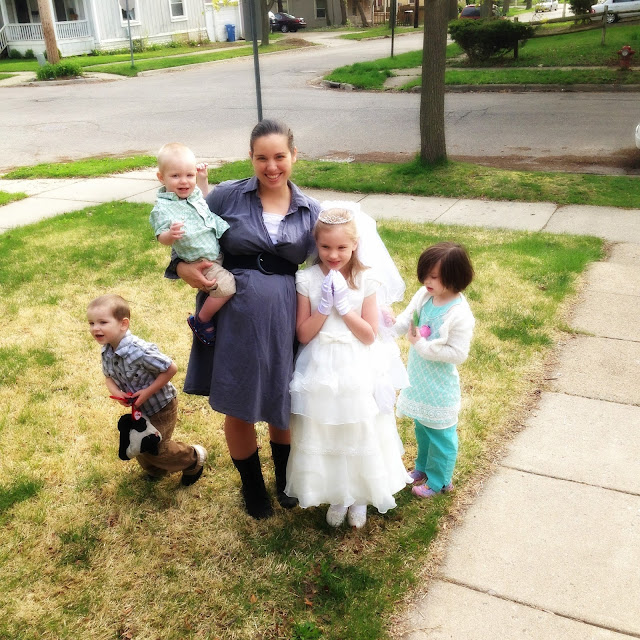 Perhaps the biggest surprise of the day was Maggie.  She walked into the church and slide into our pew.  For the hour before the Mass started, while pictures were being taken, she sat almost still and was totally silent, and looked at her book.  I had a bit more wrangling to do once Mass started, because she became much more excited, but she still only made a few small happy sounds over the course of the Mass and didn't have to be taken out once.

Patch and James on the other hand were in fine form before Mass even started.  James was the first one to have to go out in the vestibule, because he was back-arching-screaming-furious that I would not let him attempt to lay siege to the altar.  Patch followed Sadie around for a while and then decided that he need to touch one of the candles that was lit around the perimeter of the church and he joined his brother and dad in watching through the glass doors. 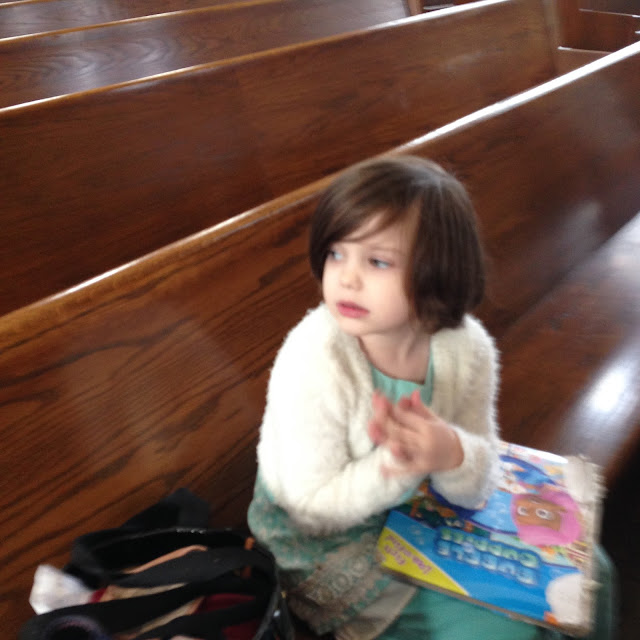 The Mass was beautiful!  Sadie was glowing when she came back to her seat! 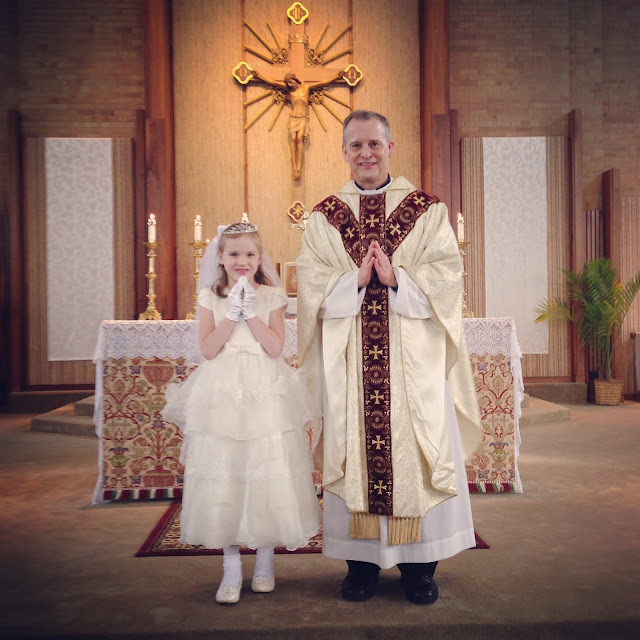 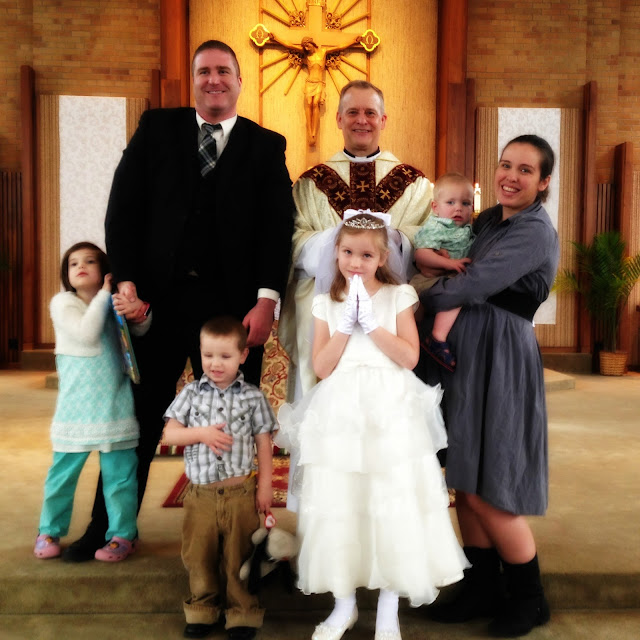 After Mass we went over to the parish hall for the reception and I snapped this photo of James destroying a cupcake. 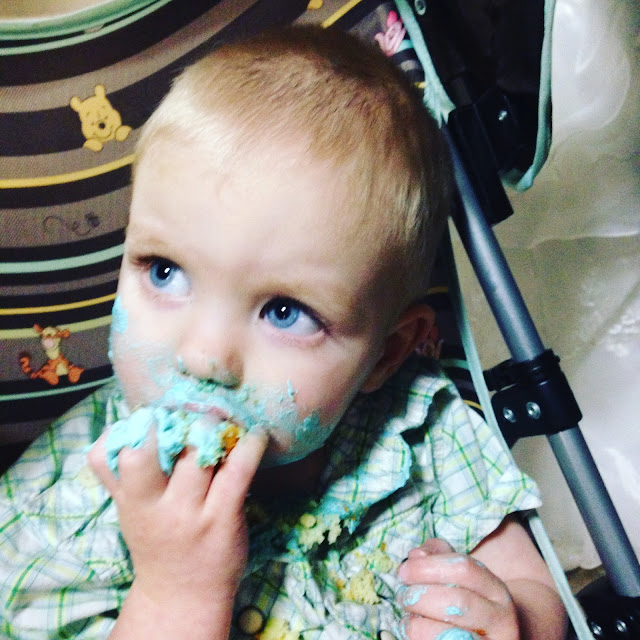 After Mass we gave Sadie the option of doing whatever she wanted to do.  Her choice?  Steak tacos at Chipotle. 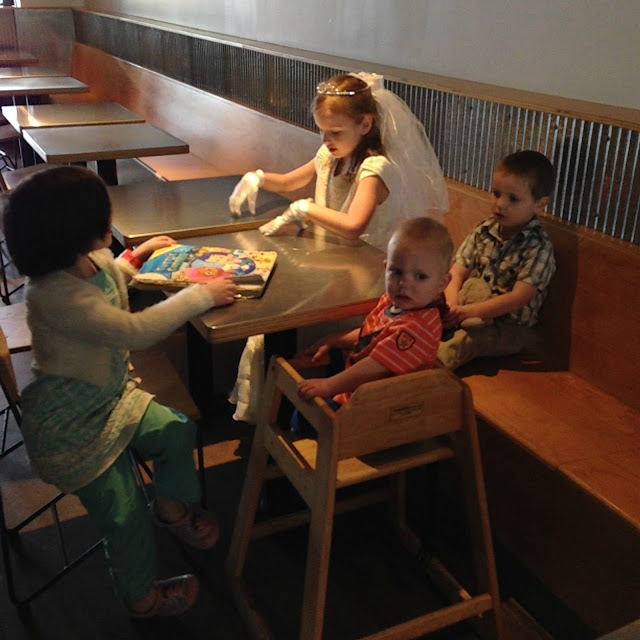 After that she asked if we could drive down and look at the house that's about half an hour from where we now live, that we'll be closing on next month (I know!  I know!  This deserves it's own post!).

As we were driving though things got a little dramatic and I ended up being rushed back to labor and delivery per doctor's orders after I suddenly started having contractions that were exactly two minutes apart, for more than an hour. And they hurt (this also deserves its own post!)!

I'm home now, although things seem to be starting back up every time I sit or stand, or don't lay perfectly still on my back... so I'm not sure how this is going to work out.  I was really hoping that it was from overdoing and that after a night of laying down and drinking a ton of water I'd be okay to go back to every day life.  But at this point I'm a little nervous.

I even missed decorating the cupcakes and cake that I spent Friday baking!  Paul took over while I was at the hospital though, and the kids had more cupcakes after dropping me off. 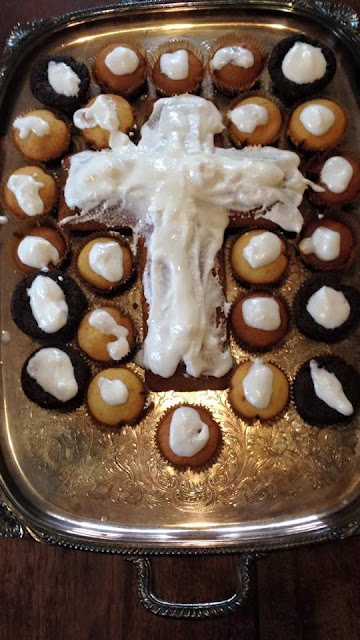 And that was our big first communion day! I'm so happy for Sadie!  She's waited so long for this!
Posted by Cammie Diane at 9:23 AM