I thought that it was probably just her eye sight right up until the moment that we went through the list of milestones during her early intervention evaluation.  Or at least I hoped that it was. I wanted it to be her eye sight.  I wanted her to be a little far sighted and just need a cute pair of glasses that would solve the problem. 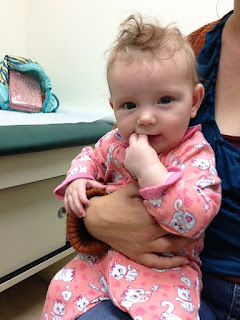 Sure, we'd have to probably replace them seventy times before she was two, but we'd figure it out.  Can you buy insurance for eye glasses?  If so we would have done it.

When someone suggested that it wasn't her eye sight I almost exploded.  No, no, no.  Don't you know what it very likely is if it's not that?  I do.

It's not that having a child with developmental delays, and in our family's case autism, isn't a blessing in many ways.  But the knowledge that you're child is going to face some pretty major struggles, in a world that refuses to accept and often fears them, is in some ways heartbreaking.

Watching your child struggle to be accepted and even be the object of scorn?  It's hard to get past. And while it's the world to change I fear every day that it's not changing quickly enough.  In fact I know it's not.

Parents please, please I beg you.  If you can teach your children one thing, teach them to kind to people who are different.  The world doesn't need more people striving to be famous or powerful.

Our world needs more people who are kind.

Of course, nothing can be certain for a while yet.  There are no tests for autism before eighteen months of age.  But the red flags are everywhere.

The first evaluation, quickly showed that something more than bad eyesight was going on.  It wasn't that she wasn't able to see up close.  It became abundantly clear as one and then two therapists evaluated her that she was avoiding all eye contact.

Someplace in my mind I think I already knew. 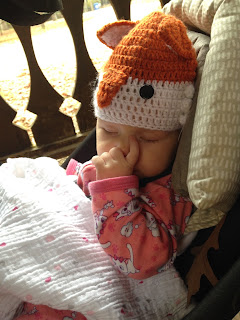 When she nurses she looks away.  When I try to catch her eye she quickly averts them and turns her head to the sign.  She smiles, looking just over my shoulder or, on a good day, at my forehead.  Not at my eyes.  If I catch her, move my eyes into her line of sight she quickly turns and squirms so she can't see me.

Maggie didn't do this.  She stared at my eyes and laughed.  I've read about this, but I've never seen it first hand.

They rang a bell off to one side of her head.  She sat perfectly still.  They rang it on the other side.  Then on the first side again, closer.  It was practically next to her ear, and loud.  No reaction.  A loud banging side on either side and again she didn't even blink. This is... significant... I heard.

How could it not be?

As these therapists, who are James' therapists and who are good at what they do, worked for an hour to get her to do the most basic of actions for a baby her age, my heart sank.  And had I seen her demonstrate any of these actions?  Does she grab a toy?  Can she shake a toy? Does she reach for a toy or look at a toy?  Does she watch her hands or react at all when she sees herself in a mirror?

In the gross motor category she knocked it out of the park, doing things in older categories, but in social communication she wasn't hitting the milestones in the one to two month category.  At four months.

She qualified.  I sat, talking about how she probably wouldn't qualify, and I totally understood that they wouldn't qualify her, after all how can a baby that's so little already have a significant enough delay, but she qualified easily,  over and over again in each category. 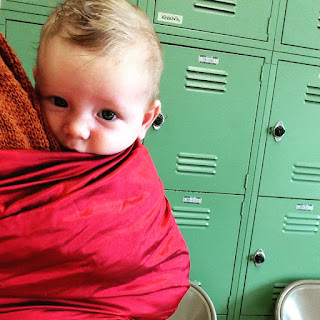 When they left I brought up the ASQ Oregon site, which allows parents to take the Ages and Stages Questionnaire that our pediatrician's office uses online and get the results scored online.  The results came back as expected:

Your child's scores in the areas of (Communication,Fine Motor,Problem Solving,Personal-Social) are, at this time, below the cutoff and may indicate that development is not on schedule.

And there was another worry that had popped up.  She sleeps a lot.  Impossibly much.  Twenty hours a day.  That morning I woke her after she slept for thirteen hours, to make her eat and get ready for her evaluation.

When the therapists left, having scheduled her first session, and while the boys played upstairs, I called the nurse's line at our doctor's office and left a long rambling message.  They called me back and agreed that our well baby check which was still two weeks off was a little too long to wait and scheduled us for an appointment.

On November 2nd we went in.  The doctor came in and examined her and talked with me about what was going on.  I explained the results of the evaluations and what I'd noticed.  I told her that I'd thought I was just paranoid, because of what we've gone through with Maggie and James, but that now, with the evaluations I was beginning to wonder if it was something more.  She tried and tried to get Tessie to look at her, with little success.  Tessie glanced at her face once and then quickly looked away.

And then she said "I'm sorry, this is heartbreaking." and began to explain that they wouldn't be able to definitively test until she was eighteen months old, but that with the family history and significant delays it is likely that we're headed in the same direction, but that this is absolutely the earliest that we could have noticed and that she will receive the very earliest therapy possible. 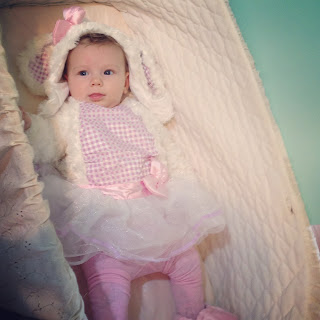 I was stunned that she saw what I saw.  I don't know why.  I was clinging to the idea that I was just paranoid.  I had convinced myself that the concern I felt when she was three weeks old and I would try to catch her eye and she would turn her head, was just an abundance of over caution.  After all three week olds don't usually make eye contact.  But they don't usually avoid it either.

We started therapy this last week.  She's been referred to our family neurologist (who sees Maggie and James).

But it's harder because I have a clearer idea of how the world treats people who are different than what passes for normal, and of the challenges that she will face in a society that is often cruel to those who are different.  When it's acceptable to publicly mock the disabled for their differing abilities and be defended for it, it's hard to feel confidence in the world these children of mine will be growing up in.  When people are praised for "terminating" children who have conditions that make them seem less than perfect, I fear for those children who grow up with similar labels and conditions.

And that is the part that breaks my heart.

I haven't really paused since then.  I called Maggie's therapist and the friends we've made at the local university and everyone is brainstorming ideas for things that we can work on and ways to help Tessie move more easily through this world so that she can become the person that she is meant to be.
But in some ways, this very real possibility has made these days sweeter.  I cuddle up next to her and kiss her head and smell her sweet baby smell and think of how easy it is right now, just to be, just to exist and savor every moment of the day.

I don't need advice about "cures."  I don't need to hear about the latest diet, or have anyone use the word "recover" when speaking about my children.  They aren't lost.  They're right here, and they are every bit of who they were created to be. 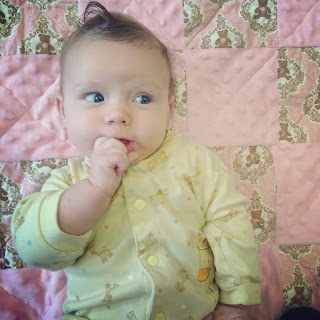 So we wait.  And we don't.  We're busy doing the little therapy exercises that a four month old can do and I try not to google the stories that tell me that studies have shown that a lack of eye contact in the younger siblings of older children with autism has been found to be significant at two months of age.

Maggie adores Tessie.  And if Tessie follows in her big sister's footsteps I can only hope that she might have a little bit of an easier time with a family that has already walked this way before and will hopefully understand her more fully at a younger age.

I'm not sure how to end this post, which has already rambled on for so long except to say that your thoughts and prayers are appreciated, in fact I'm certain the prayers of those of you who knew bits and pieces of what's been going on have carried me through the lows and highs of the last few days.

Now to get ready to take these little ruffians to Mass.

Last night Maggie (who asks every single day of the week if we're going to Mass) smiled when I said that tomorrow was the day and then said "Church.  Mass.  Jesus.  Doughnuts."  She giggled when she said doughnuts and then repeated it two more times.

Maybe Maggie and Tessie will be two little mermaids in a pod.  Time will tell.
Posted by Cammie Diane at 9:25 AM