I promise that one of these days I'm going to write about something else.  I was meaning to write all week, had blog post ideas flitting through my head, but I'm on day eight of a hundred plus fever and I've been falling asleep as soon as the kids are in bed each night.

I've even given up on NaNoWriMo this year, as mini disaster after disaster have kept me from writing until I've decided it's just not in the cards for 2016.

We had another scary night with Tessie.  It started with an alarm going off and a floppy baby and momentary terror that had my heart in my throat and was followed by a dozen more apnea alarms before morning, but this time I realized in early morning that the light that signaled a too slow heartbeat was also bright red and glowing.  And that is how I found myself on the phone again with the pulmonology office, the after hours line this time, in the early early morning. 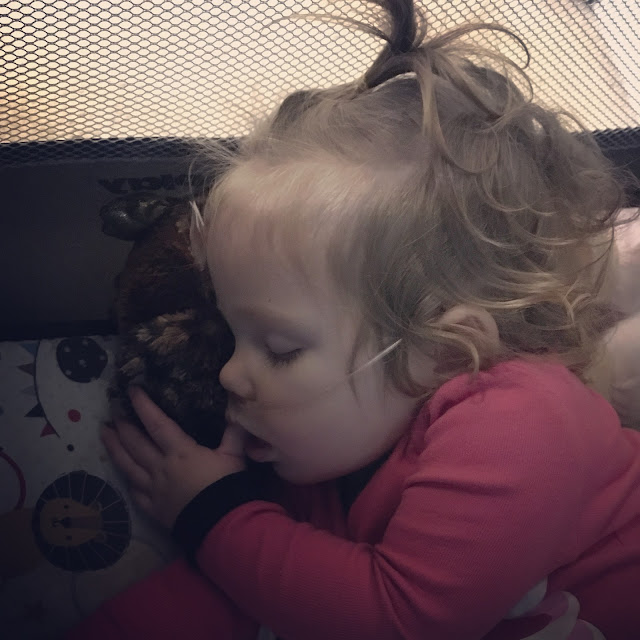 It can be a delicate balance.  She has central apnea.  That means her brain stops telling her to breath.  That's why she has a monitor.  If I called every time she had a dozen apneas in a night I'd have called a lot.  Every night when she was tinier.  And the "is this important enough to call" can feel complicated.  Sometimes, as we've been on this journey with her, tiny things are actually huge and things that feel huge aren't important at all.

The person who was on call was in her car when she called back and explained that as a result she couldn't see Tessie's file, but after a moments conversation she announced that she knew exactly who Tessie was, because there had been some conversation in the office about the results of the second sleep study.

Now for those who is new here, two sleep studies ago Tessie only had 15 central apneas, which was no enough for her insurance to continue to pay for her monitor.  I fought this, because she's had instances, like the one the other night, where she's stopped breathing after having next to no apneas for a month beforehand, and had to be turned onto her back and had her chest rubbed hard until she gasped and started breathing again. 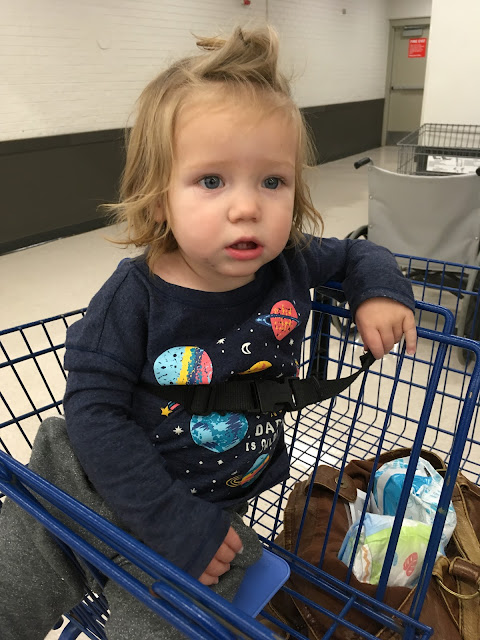 I spoke with a nurse twice and was told they would not be budging on this, it was policy that when there were less than five episodes an hour the monitor went back to the medical supply company, and than Paul spoke with one of the pulmonologists and was told the same thing.  We finally took her in to see her pediatrician and he called and fought for her to keep the monitor and they ordered another sleep study, saying that if this one is normal we'll know with 99.99999% certainty that she is fine.

I will admit that I felt like I was being humored.  And what were the chances that she would have a bad night?  They were terrifying, but also few and far between.

But she did.  She had multiple instances of hypoxia, which earned her the right to keep her monitor for another six months, and resulted in the delivery of a giant oxygen machine that gurgles happily in the center of the room all night long.

The On Call knew who Tessie was because there had been a conversation in the office about her case when the results of the seconds sleep study came back, about "mother's intuition" and how unlikely it was that I had persisted in pushing for more tests.  She said the talk in the office had been that "if that baby had been with another family, it could have been..." her voice trailed off and she left the rest unsaid. 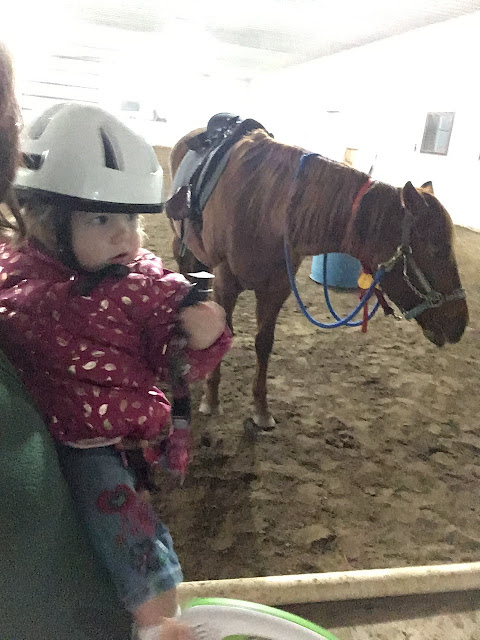 It could have been very, very bad, my mind completed the sentence.

Two nights ago, Paul had gotten to her before I did, he was maybe three steps ahead of me, and he shook her shoulder and she had flopped back and forth still, soundly asleep and for a split second, before I realized that the heart monitor was still showing a steady green light, I was terrified.

I thought that we'd lost her.  Then I saw her chest moving steadily up and down again and I couldn't stop shaking.

If she hadn't had her monitor then, would she have been all right?

Still the sleep study and hypoxias have bought us six months with her apnea monitor and maybe in six months she really will have outgrown it.

If she's going to outgrow it.

No one can tell me if she'll outgrow it because we still have no idea why it's happening.

Or maybe I'm going to be holding my breath every six months, forever. 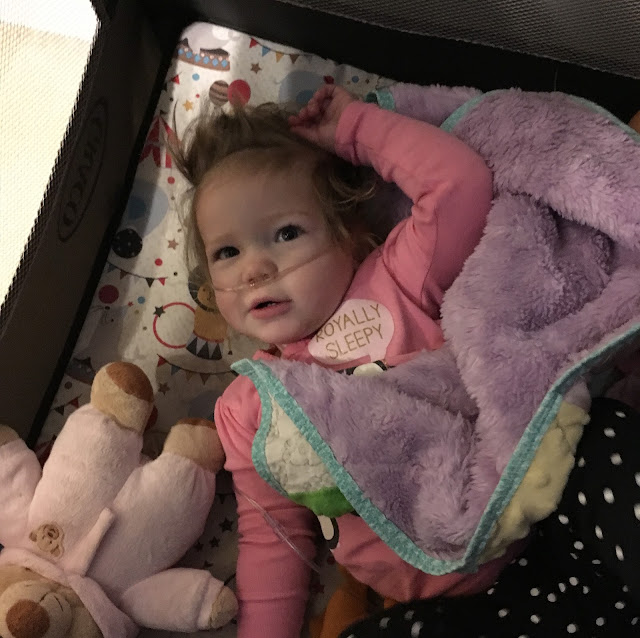 There is a tiny sliver of good news in all this though.

Tessie has had weekly therapy sessions since her developmental delay became so glaringly obvious when she was between one and three months of age (at three months she was missing virtually all of her one month milestones).

Her last evaluation was about a month ago.  Her results came back showing some big strengths.  She scored a 12.5 out of a cutoff of 7 for intelligence.  Her gross and fine motor skills were similarly strong. But she was way below the line in social communication and initiative, giving her a 40% delay in those areas.  Which is... not insignificant.

However after five days on oxygen she was vocalizing way more than she usually does and was making a little bit of eye contact and definitely using her voice (in whines mostly) to let us know when she wanted something.  Usually she doesn't do that and doesn't let anyone know when she needs something, so that was extremely encouraging.

Her pediatrician is planning on sending her for an autism evaluation in a month and a half when she if officially eighteen months old.

On Wednesday we were at the older kids' gymnastics classes and she fell asleep on me for the third time in her life (if I'm counting correctly).  She loves to snuggle but it's almost impossible for her to be still against me.  Usually when she's tired she wants to be in her bed by herself and she quietly falls asleep.  Which is how she has been since the day that she was born.

So I loved every moment of her sleeping quietly against my chest. 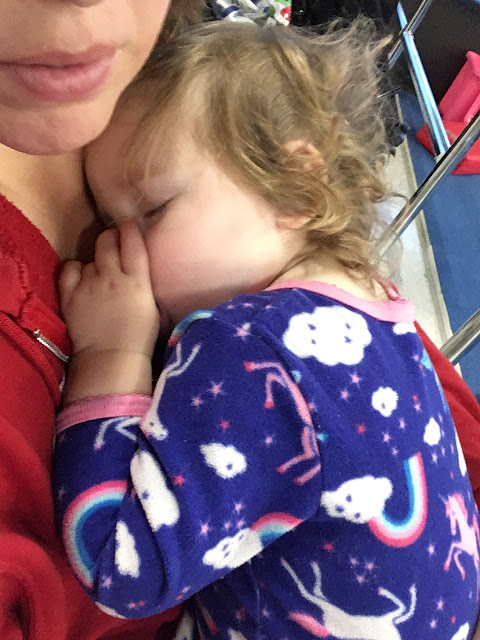 And in other news, she was able to have a equine therapy session alongside Maggie yesterday, which was hilarious to watch.  At one point she was riding along and I could see her bouncing up and down on the saddle happily as she went past.


So we wait and pray and cuddle our hilarious and strong little bunny.

We are so lucky to have her.
Posted by Cammie Diane at 9:19 AM