Disclaimer: If medical tests like spinal taps make you queasy, maybe skip this one.

Yesterday I found myself thinking, as I signed a paper that said I understood the procedure that the ER doctor was about to perform (followed by a brief description in my own words that said he was going to "insert a needle into my spine to withdraw fluid to be tested" to make sure I really knew what I was agreeing to), that any time I'm having a tough day and find myself thinking "can this day any worse" I will forevermore ask myself "have you had a spinal tap today?" and if the answer is no than yes, it can get much, much worse. 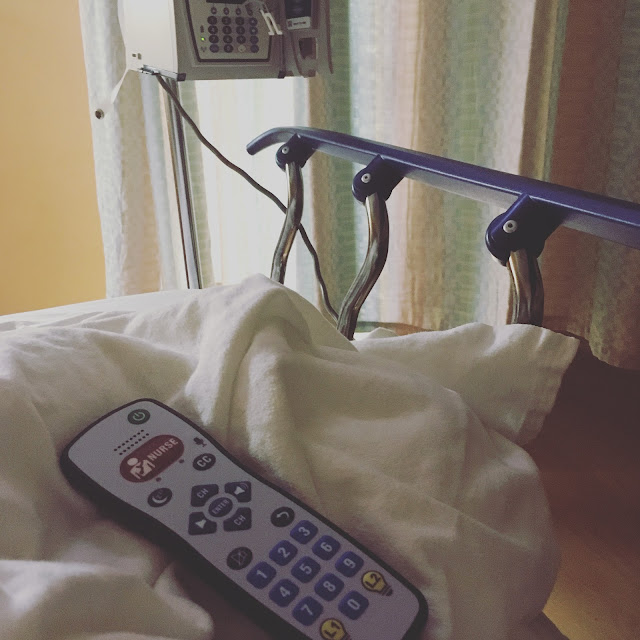 On November 4th I woke up with a slight fever.  99 degrees.  Not even a real fever, really, I told myself.  I had a 5k to run.  It was my second after four months of training and I was so, so excited.  Sadie was in a kid's race and was extremely excited for us to be running on the same day. Besides I'd had a cavity filled the day before, so maybe it was from that, at least, that was the excuse I made when I laced up my shoes.

So I ran, which, in hindsight, was a horrible decision.  By the end of the race (my disappointing 11 minute mile was a miracle) I knew that the temperature wasn't a fluke and that some bug was coming on fast.

By night time I had a fever of 105.2, despite Tylenol and Motrin.  I finally managed to sleep and in the morning I felt a little bit better.  The fever was down to 102.

By Monday morning I felt mostly better and we had a busy week of new schools and bus schedules and while I knew I didn't feel well enough to run, it didn't really matter, because life was too busy with all the changes that had come along.  I pushed through the fatigue, and headaches, and nausea, and went to sleep as soon as the kids were tucked into their beds.

The next week was the next time that I took my temperature and it was then that I saw that it was still over 100.  And over a hundred it stayed.  After a week of daily fevers I went to see my doctor, and told him I was afraid I had a kidney stone, because my kidneys had begun to hurt (and having had infections in the past, and one stone, I knew that feeling).

Every test came back normal, including an ultrasound of my kidneys.  He said to come back in a few days if the fever didn't resolve, and so, three days later I was back.  He ordered ultrasounds of my gallbladder, liver, spleen, and a few other organs, and while my spleen was slightly enlarged, everything looked good.

After thirteen days of fever he ordered a Mono test, an EBV test, and a CMV test.  They were all positive, but the results showed that they were all past infections, with no current antibodies.

Somehow I cooked Thanksgiving dinner (I was extremely proud of managing that while feeling the way I felt) and yesterday, on the seventeen day of the fever I called at 8am when the office opened.

I mentioned that the fever was still hovering between 100 and 101 most of the time, and that for the past three days I'd had a dull headache and neck ache. Nothing horrible.  Just annoying.

And they sent me straight to the ER.

I was embarrassed to be there, with my low fever and dull headache and neck pain.  The triage nurse put me in a room with a chair and said they might move me somewhere else if someone else thought I needed it.

After an hour a PA came in and was immediately more concerned.  17 days of fever.  Well 23 if you counted the week I didn't take my temperature and went back to that fever of 105.2 (and apparently everyone there thought that counted). And neck and head pain.  But not severe, I pointed out to anyone who would listen (I'd googled and google said spinal meningitis was the worst headache ever... this was not that).  She told me to wait while she talked to the doctor.

A nurse arrived a few minutes later and took me to a room with a bed.  And a moment after I tied the hospital gown behind my neck the doctor was in the room explaining the difference between viral and bacterial meningitis (he did not think bacterial was likely, because I probably would not have survived that long with bacterial meningitis, but viral might be possible, yes, even with the dull pain) and he was explaining why I needed a spinal tap, and excuse me nurse can you bring her some fentanyl and ativan (things I learned yesterday: I can still be totally panicked about that needle being near my spine after being given ativan).

Before yesterday I had had 10 injections in my spine... four cortisone injections for a herniated/ruptured disk, two spinals, and four epidurals (one went bad and had to be replaced with a spinal, which is why they don't add up).  When I go in for c-sections, the epidural is the thing I stress out about for months and months beforehand, not the major abdominal surgery.

And the lumbar puncture was... about as I expected.  It's not something I hope to ever experience again.  And today I've found that I can spend a solid ten minutes on my feet before I have to lay down.  It still hurts.  A lot.

And so far still no answers.  I'm home.  Something liver related was elevated.  Even my white blood count was solidly normal (and lower than the last blood test... I glared at those results like "you aren't even trying!  Fight back!").

And that is what is going on here.  Lots of laying in bed with kids on all sides watching cartoons (and when they aren't here catching up on any and every Netflix show I've ever been vaguely interested in).  I'm really caught up on my royal family news.

And I've never been more thankful for buses.  Today everyone came and went to school and all I had to do was walk out on the porch and wave.  I'm not sure how I would have survived without those glorious yellow buses.

Hopefully I'll have some good news soon.  Like that the fever is gone.  And that I'm up and about and not running to lay down every half hour.  And that the scary things that come up if you google "persistent fever" have not come to pass (I know, I know.  Do not google.  I'm the worst at that.).
Posted by Cammie Diane at 7:39 PM