Tessie Rocking Her PECS Binder is the Best Christmas Gift

Tessie has been using a Picture Exchange Communication System book (also known as PECS) to communicate at school for a few weeks now. I went through the first training near the time when she started and then I completed the second training this last week.

On the last day of school they handed over a tiny white binder full of tiny velcro covered, laminated photos.

I'd been warned that she might be resistant to the idea of using her binder at home.

So far the only thing she's been resistant to is the idea of fetching her binder herself, which is somewhat complicated by the fact that I have to protect the binder from a certain binder destroying mermaid at all times.

Meanwhile, Tessie is rocking the PECS binder. She's been using it to tell me what's on her mind at all times: 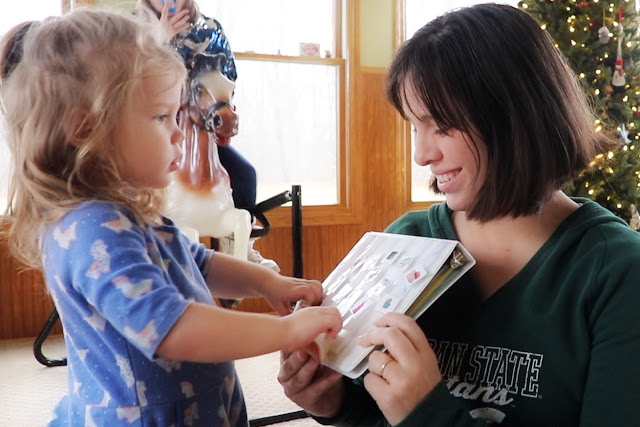 The first time she picked it up was to tell me she didn't want a bread stick right then. She wanted pizza.

The next morning I handed her a bowl of cereal and she handed me a strip of paper and pointed at the words "I want cup" as I read them back to her before I'd even had time to walk back into the kitchen to grab her cup.

She was on a roll and was letting me know exactly what she needed at every turn.

I hadn't gotten much of it on video though, until today at Nani's house.

I know that Tessie loves oranges. She had already had three. And I realized that her binder actually had an orange card in it.

So I peeled an orange, set up the camera, and sat down to see what would happen.

And Tessie gave the greatest demonstration of how to use her book that I possibly could have imagined.

I thought she might have a bit of orange and then I could explain how it worked.

Instead, any time I would start to talk about her book she would appear to be reminded that she had a book and she would race over and use it to ask for another orange slice.

And as a mom to a kid who previously couldn't ask for anything at all it was a pretty amazing experience.

Which is why I am elated to be able to share in this video, because the content is pretty much my all time favorite.

I am so proud of Tessie.

And after two days of watching Tessie, Maggie who would have nothing to do with PECS when she was three is now very interested.

Yesterday she used the book to tell me she wanted a cheeseburger.

I think we might have to give this whole PECS thing another try with Maggie again too. 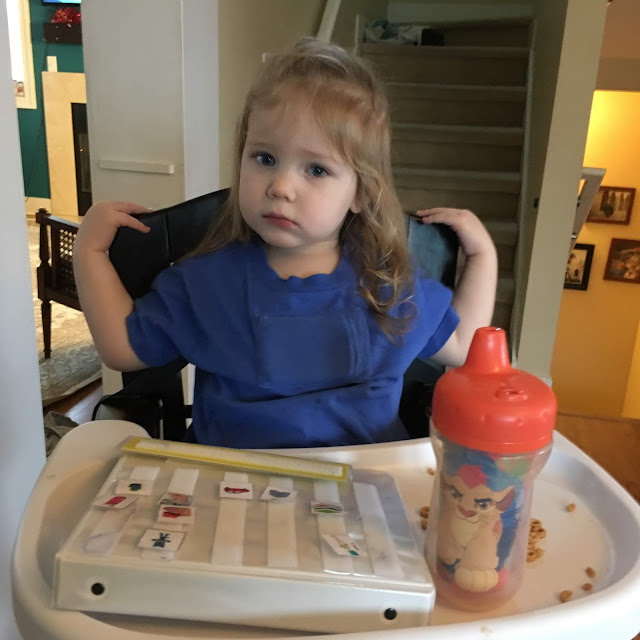 I have to say that I am going into this Christmas feeling pretty grateful.
Posted by Cammie Diane at 10:02 PM