Nani and Bopa went out of town on the 8th and arrived home this morning long before the sun came up, after their flight landed just after midnight in Detroit.

As you may have already imagined, I've been counting the days until they return. I expected their not-quite-three-weeks away to be a bit harder than usual. Juggling all the pickups and drop offs on my own is always a challenge. But I didn't expect it to be the marathon of ER visits and sick kids that suddenly appeared within days of their departure. 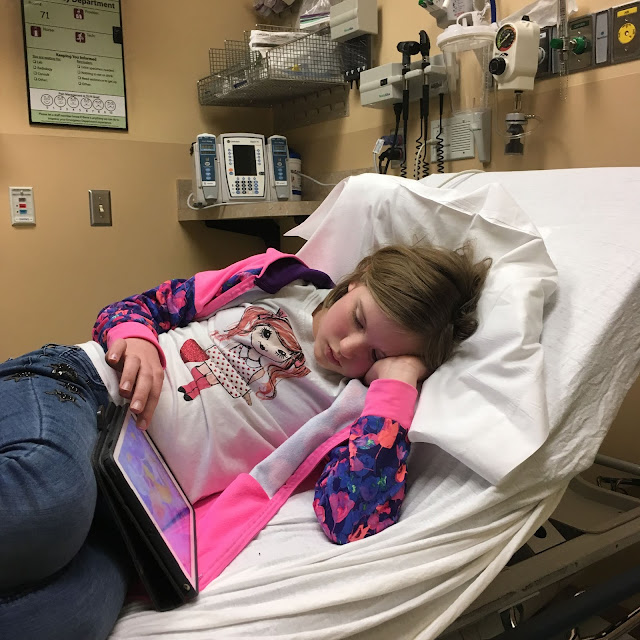 During their trip there were the regular things on the schedule, like a week long field trip for Sadie's class (she was home at night), and two parent-teacher conferences, but then there were some not on the schedule things that popped up... like the ER visit for Tessie when she was so dehydrated from whatever was going on with her tummy, the doctor's appointments first with primary care and then gastroenterology following that, and then blood tests and other even less pleasant tests I'd rather forget (and we got all those results today and all but the weird one that is consistently abnormal for both Maggie and Tess, were normal).

And then Maggie eloped, not just once, but twice. The second time was after I thought she was safely on the school bus and headed off, but she took a split second opportunity before the door was closed and before the bus driver got her into her harness to dash down the steps and head off down the street.

Thankfully I was only halfway down the path back into our house when she took off:

There were, of course, some really, really fun times.

There was a mother-son Super Hero Dance and I got to take both boys and we had a blast.

And of course I did some more abstract thinking in the wee morning hours about some of the challenges we've faced over the last few years:

But nothing prepared me for Friday morning when Sadie woke up and said that she had had a hard time breathing when she'd woken up to get ready for school.

Sadie likes to wake up long before the rest of the house and take her time getting ready. I asked her how long it had lasted and she said, "about an hour." So we talked about how that is emergency, and how that's something you tell mom and dad about right away, because with certain kids around here, if "an emergency" hasn't been defined they don't always quite realize the seriousness of the situation.

I will admit though, that she seemed fine when she came downstairs, and because she hadn't come down to us during the attack I wasn't too worried. I called her doctor's office and since they didn't have any appointments available for that day anyways, I made an appointment for Monday.

The next morning, she came downstairs and had a full blown asthma attack. As she struggled to speak I yelled to Paul to get his inhaler and within moments of breathing in the Ventolin she was breathing better.

Sunday was uneventful with only one early morning attack, which the emergency inhaler quickly resolved.  And Maggie's doctor called Sunday night (and explained that she wasn't worried about Maggie's abnormal blood test) and when I mentioned she'd be seeing Sadie the next day we quickly chatted about what was going on with her too.

Monday finally arrived. We went to the doctor and Sadie's lungs still sounded pretty terrible. When the doctor asked her to breath deeply it sent her into an attack, which was resolved when she used her inhaler. She asked Sadie if she thought she needed a treatment and Sadie said she thought she was okay with just the rescue inhaler.

After listening to her breathing again it was significantly improved, so she sent us home with a prescription for a twice daily preventative inhaler, thinking that along with the steroid, and the rescue inhaler, we should be on our way to getting her breathing under control.

She also mentioned that the x-ray had shown "peribronchial cuffing," which she said was basically thickening from inflammation in her lungs. And finally she confirmed what we've suspected since Sadie was a little tiny baby, which is that she believes that Sadie has asthma.

I thought that would be the end of the day and that we'd go home and Sadie would rest while I gathered the courage to send her back to school with her inhaler.

Instead, while we waited to pick up her prescription, she had another attack. And her inhaler wasn't quite as effective this time. Five minutes later the third one hit. I stood next to her as she used her inhaler again, sitting in her seat in the car, and then I jumped into the driver's seat and headed straight to the ER.

At the ER she was whisked back past the first and then second triage, and a doctor immediately came into the room to listen to her breathing.

It was rattly and squeaky and wheezy and her right lung was significantly worse than her left.

Four hours later, after many people had listened to her lungs, we were finally sent home with a nebulizer and a ridiculous amount of albuterol and a new asthma plan.

On Tuesday she had one attack, while we waited to pick Tessie up from school. Her inhaler worked.  But it was disturbing to see that my usually bouncy girl can't laugh or run a few steps, without immediately being unable to breath.

It's such a sudden, drastic change, and no one can pinpoint the cause.

Then Wednesday arrived and we went back to her doctor for the post hospital follow up. I was hoping, after the final day of steroids, and the daily preventative treatments that she'd sound better.

I could tell though after she walked down the hall though that she was breathing fast, even after ten minutes of sitting in the exam room.

He listened to her breathing and asked if she'd been taking the medications. I explained she'd completed the Presidone and had been taken the Qvar (daily inhaled steroid).

A few moments later he announced that we needed to be doing 2-3 time daily nebulizer treatments alongside the Qvar and that she needs to come back next Wednesday to see if it's under control. And she needs another course of Presidone to see if that will help.

As we sat in the line to pick up the prescription the phone rang. It was the nurse from gastroenterology explaining the various test results to me. I was barely juggling talking to her and verifying the prescription information when I heard Sadie say "Mom!"

"Just a second honey. It's the doctor's office."

It didn't even click in my head. I'm so used to people saying "mom, mom, mom" all day and it didn't dawn on me that this is the child who doesn't interrupt conversations, especially on the phone.

When I hung up she finally said, "Mom. I think I need my inhaler." and it was clear that she really did. And she was sick to her stomach from waiting too long, even after she could breath again.

So major lesson learned. And I've explained that she doesn't have to ask to use her inhaler at home and that if "mom" doesn't work because I'm distracted to try "help!" instead.

That is basically what's gone on lately. I'm really hoping we have this under control soon.

And now it's time for another nebulizer treatment.
Posted by Cammie Diane at 9:03 PM

Email ThisBlogThis!Share to TwitterShare to FacebookShare to Pinterest
Labels: asthma