I wasn't planning on taking any sort of break from blogging.

But then February acted the way that it always does, as the longest short month of the year, simultaneously rushing and crawling by, so that I wondered how one month could be so busy and yet so torturously slow (and also cold) at exactly the same time.

We wracked up snow days until we were in the double digits and all wondered when it would actually be warm enough for any of the kids to even ask to play outside again.

Which is how we plowed through, eyes on the prize (spring) into March, knowing that sooner or later, unless we're spinning off into an ice age, it has to get warmer eventually.

Unfortunately you throw in a tiny bit of non sub zero temperatures and some people get more than a little restless. 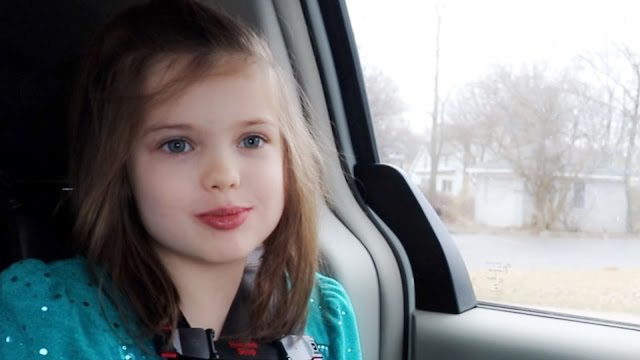 In the last few weeks I've argued with small people about whether or not we needed to bring jackets when it was 36 degrees outside and whether tank tops were appropriate when the mercury in the thermometer hit 44 (they say no and yes, respectively to those questions).

And that likely contributed to our major St Patrick's Day drama.

I was planning on a quiet Name Day celebration that included Mass, followed by then letting Patrick pick out lunch and a cake for a small family celebration at home.

While I was making lunch though, things took an extremely unfortunate turn.

Sometimes the double cylinder lock on the front door doesn't quite turn all the way. That is to say, it feels like it twists, but the bolt inside doesn't quite fasten. Usually you can feel it. Sunday, as we brought the rush of kids and cake into the house, we didn't.

We were home for about an hour, and lunch was almost ready, when Paul walked into the room and asked why the door was open. I asked what door it was, but before he answered I knew the answer. And I knew that it could only mean one thing.

I looked east and west, the way the road outside our house runs and there was no one in sight.

It was the worst feeling, knowing she was already so far away I couldn't see her. I headed east, figuring she would go the way that we usually go and when I hit the frontage road, already on the phone with 911, I headed south, making another guess.

The 911 operator quickly asked if I was calling about the five year old running near the highway after I said my location and when I said "yes" she said that they knew about her and the police were on the way and hung up.  I kept running and called back, quickly saying that I was the mother, that they needed to know, she's autistic and barely verbal. That she's a runner. That she is drawn to water. That she can't swim.

I said everything that I could think might be a matter of life and death, gasping out the words, as I pushed on down the road. Paul was somewhere back behind me, locking up the house and getting in the car. He hadn't had his shoes on and I had a head start.

She might be near the highway, they said. They couldn't give me an exact location, they went on, in case they were wrong. Paul pulled up and so did another woman, who could tell by my panicked expression that I was searching for the lost child that she had seen moments earlier.

Then the dispatcher in my ear told me that she believed that the police had her.

Yes, yes that was right, she was checking to make sure. The police had gotten her.

She was in his car.

The woman in the stopped car pointed us in the right direction, because the dispatcher still couldn't confirm where they were, and off we went.

From the top of the highway overpass we could see the police car at the bottom of the onramp below, lights flashing.

I held my breath.

She had crossed the bridge and run down the onramp.

Later we would learn that cars had attempted to block her but she had darted down past them closer and closer to the highway until the police officer had gotten there and jumped out and grabbed her and scooped her up.

He had known who she was.

Because of the flyer.

He brought her home and we looked back on the tape together from the security cameras and realized that she had only been gone for seven minutes, while I was in the kitchen cooking and while the other kids were playing in the back yard (where she had been a short while earlier before discovering the unlocked door).

In seven minutes she had put serious distance between herself and our house.

When I watched the video though, it made sense, because she was sprinting the entire way.

And she wasn't alone.

Tony, our small, extremely timid chihuahua, knew that she wasn't supposed to be out of the house and didn't know what to do to stop her. So he went with her.

We didn't realize it right away because after six minutes he came back on his own and was already in the house (panicking), and in all the rush and panicking the humans were doing, no one noticed the tiny canine.

He's being hailed as our own tiny hero though and you can tell he's quite pleased with himself now that she's back.

On an entirely unrelated note, I wanted to get the kids Easter Baskets done before Lent this year 1) so that I could focus on Lent and 2) because Dollar Tree generally runs out of seasonal candy extremely early and so, before Lent seemed like as good a time as any.

So the kids' baskets are made up, and safely tucked away, awaiting the end of Holy Week and I made a video in case anyone wants ideas for a wide variety of ages:

And in other Easter related news (because checking things off my to do list early is high on my to do list these days), I also managed to hit the Once Upon a Child Easter Dress Wear Sale on it's first day, to get all the kids' Easter outfits for this year.

They were all pretty excited by what I found:

A lot more than that has happened of course (there's probably about forty other videos over on the channel that goes into much of that), but I've already written so much and there's clamoring from small hungry people who need me to make dinner ASAP.

Oh! But before I go.

I finally decided that my finished novel (one of them anyways) wasn't doing me any good just sitting around, collecting dust, with no one reading it.

So I decided to publish it on Wattpad. There are currently five chapters up and I'm updating it on Mondays, Wednesdays, and Fridays for anyone who's interested in reading about dragons and fantasy and things that are entirely different from what I normally talk about here.

And that is it for today. Here is hoping that the second half of March is much more boring than the first half.
Posted by Cammie Diane at 6:32 PM