A Birthday, A Collapsed Lung, and A Genetics Appointment

The last week of March was hectic.

But before I get into the part where things got really scary and Sadie was hospitalized because of her asthma, I'm going to share a little story from this morning. 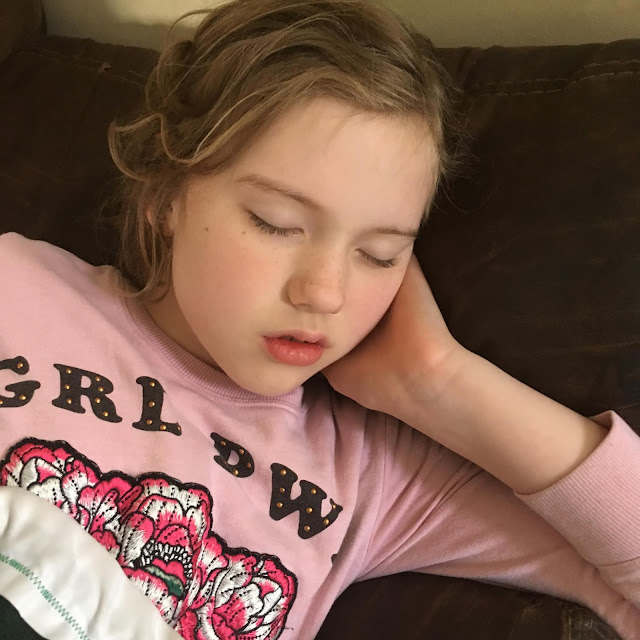 After a week of having her asthma controlled using her steroid inhaler twice a day, and her rescue inhaler every four hours, she came home from school and I learned that she had her first "attack" since getting out of the hospital.

It was at recess, she explained, but was vague about the details no matter how much we asked. But this time her inhaler had worked and she'd been fine.

At home, over spring break, after getting out of the hospital, she'd been running around quite a bit once things were under control, so I was a little surprised that recess had caused it.

That is until this morning when she said, ever so casually, "Hey Mom, guess what? I ran two and a half miles in mileage club yesterday! And guess what else? I'm faster than everyone else now!"

"Now... that you have your inhaler?" Because you see before, she was one of the slowest kids out there. Everything began to click into place. "So. Um. Were these two miles, before of after that asthma attack?"

I couldn't help but laugh at her enthusiasm.  The asthma attack was explained.

I think she pushed herself just a little bit too hard too soon. 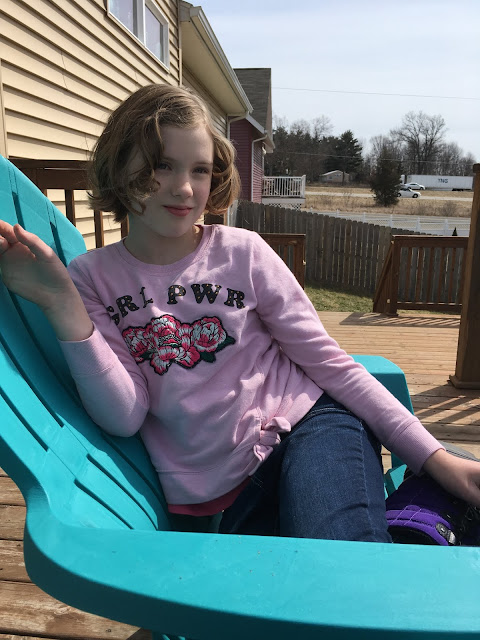 Especially considering the fact that her doctor thinks it's likely that she had a partially collapsed lung less than two weeks ago.

The day got off to a rough start. Tessie had a genetics appointment for a second opinion at the other children's hospital that's near us.

After the first office never brought us in for a follow up appointment to explain what the results actually meant, beyond a hurried phone call promising an appointment (despite asking for one), I asked our doctor if a second opinion would be possible. He said it would and a few weeks later I got a call asking if we were getting a second opinion or transferring care.

I said that I wasn't certain, that I was leaning towards transferring care, and they told me that they would triage her records from her whole exome sequencing and call me back. If it was not serious the wait would be six months. If it was more serious it would four.

I've gotten used to waiting for specialists though and six months really isn't all that bad. 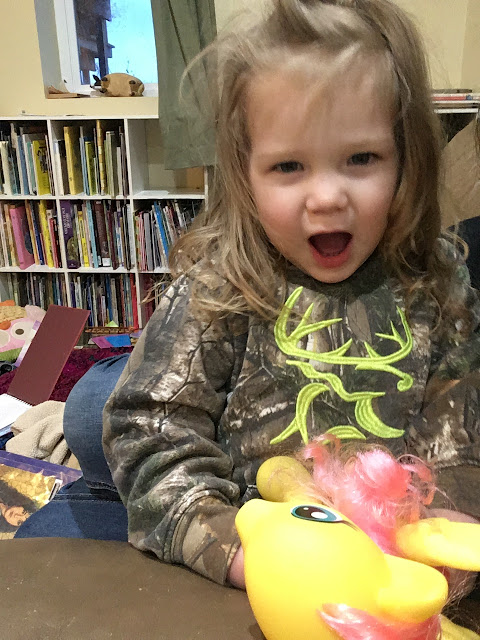 A week later they called again.

Would I be willing to transfer care?

I guess. Sure. Yes. I wasn't happy where we were. What did we have to lose?

They wanted to see Tessie in two months.

I hung up the phone. What exactly did that mean? If not serious was six months, and more serious was four, what was two?

Her doctor explained that it probably meant that she was interesting and not to worry, but it was hard not to. 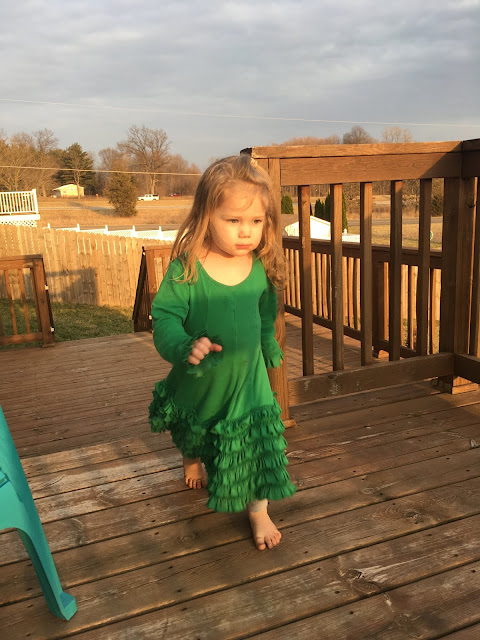 I worried even more when we woke up on the morning of that appointment and Sadie could hardly breath.

We did a breathing treatment and she sounded a little better, but there was no way I was sending her to school like that. And suddenly the best place for her seemed to be one of the best children's hospitals in the country.

So I loaded her in the car, along with Tessie, and we headed south and then east.

An hour later her breathing finally sounded good and she finally felt better.

We went to Tessie's appointment and they explained a lot about the rare gene that Tessie inherited from both Paul and I. They said that they'd like her to come back in a few years, because they're hoping that by then, they know more.

However they were really interested in the other gene that she and I both have. The EXT2 mutation that we have is supposedly pathogenic. It should cause bone tumors (osteochondromas), they explained, in 96% of the people who have the gene. 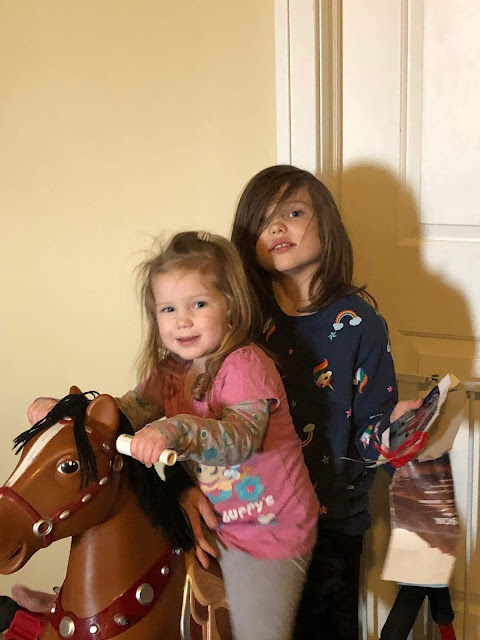 But (and this was a big, hopeful, but) they were hopeful that this gene isn't really pathogenic. Because there are four people who are known to have this variation, other than Tess and I, and none of them have osteochondromas, which usually show up by the time a person is Sadie's age (and because this gene is dominant each of our kids has a 50% chance of having inherited it from me).

And I don't appear to have them, which kind of makes five.

So they wanted to do a full body x-ray of Tessie, because if she's going to have osteochondromas they should have already begun to show up by this age.

The x-ray process was not fun. But knowing with a high degree of certainty whether or not she was going to have this problem was going to be a big relief. And since it's been a week with no news, I am taking that as a very good sign.

So we drove back home.

She felt so good that she was even able to go to her parent-teacher conference that night, which is student led, to show me her power point presentation.

We went on a little walk together, and her breathing sounded great. And we even went to the store before heading home.

As she was eating dinner, it started. She started to shake. She was freezing, she said. Could she turn on the heater?

I asked her to look at the thermostat. It was 75 in the house. No, she couldn't but if she was really that cold she could get a blanket.

Her breathing still sounded fine. Until it didn't. As dinner ended her chest felt tight. She started to have trouble breathing. I grabbed her inhaler. It didn't help much.

We waited twenty minutes, and I helped her down to my room and set up the nebulizer. She was still on three time a day treatments and it was time for one anyways. I started the machine and sat next to her.

And that was when I really realized that something was wrong. She'd say something now and then, and she just wasn't making sense. She said her chest felt tight and the right side hurt a lot. But I was especially concerned because when she spoke she just wasn't herself.

I grabbed my phone and called her doctor while she was still hooked up to the breathing treatment.

The answering service took the message and her doctor called within thirty seconds.  I'm pretty sure she gasped three times while I described what was going on and then told me to take her to the ER now.

Paul had been with the other kids, and thought it was just as asthma attack (and as a person who's had asthma attacks all his life I think he thought mom was overreacting a bit). But he helped me get ready and Nani met me on the road on the way to the highway and jumped in our car.

The triage nurse said her lungs sounded okay and I thought that maybe the albuterol had finally kicked in. She had a fever of over 100, which was why she couldn't stop shaking.

The PA said she sounded bad. The same respiratory therapist from Monday came in and gave her a breathing treatment.  And then the attending doctor came in with a group of people and blood was drawn, an IV was put in and another chest x-ray was ordered.

And that was when we were told that she had pneumonia, a white blood count that was through the roof, and that she was being admitted.

She was on two different antibiotics, and was curled up in bed, when I left that night, with Nani sleeping on the fold out bed.

In the morning I got Patrick, the only kid that had school, off to school with Paul, and then raced back to the hospital.  Nani came home to watch the other three with Bopa. A doctor came in and repeated that it was pneumonia and ordered a new antibiotic. 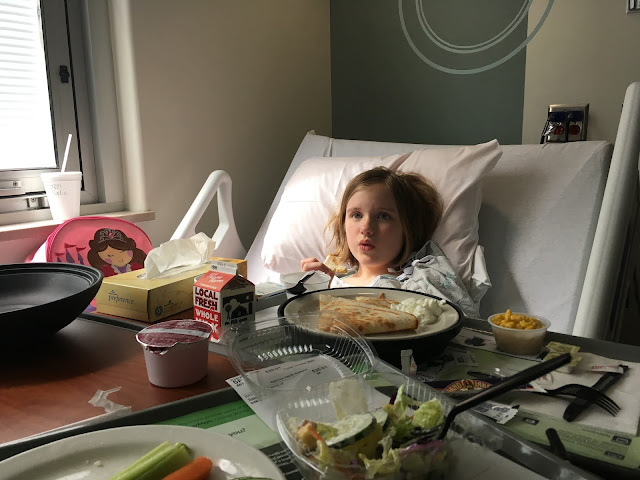 In the afternoon a group of doctor's came in for rounds. They asked a lot of questions about her history and then announced that this wasn't bacterial and that she was being pulled off all the antibiotics and had a new emergency action plan.

She was doing much better, bopping around the room, cracking jokes, and she could go home.

But I was confused, I told her doctor at the follow up two days later.

Was it viral pneumonia? Why did she improve so fast on the antibiotics?

Her doctor looked through the chart and said that sometimes, with asthma, a collapsed lung looks like pneumonia on an x-ray, and sounds like pneumonia, because you can't hear air moving through the lung, and that that's what they thought had happened. 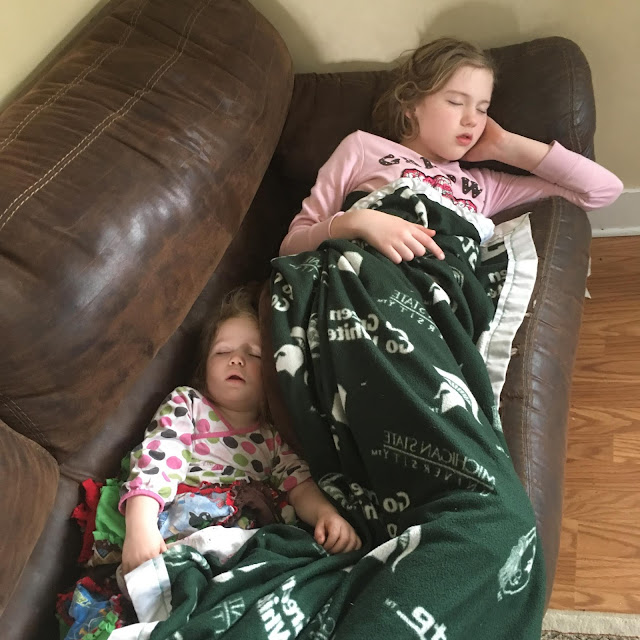 I did make this video of that first day, when we went to urgent care, but more importantly, this video is mostly about the huge week long field trip that Sadie's class got to go on the week before all this started. 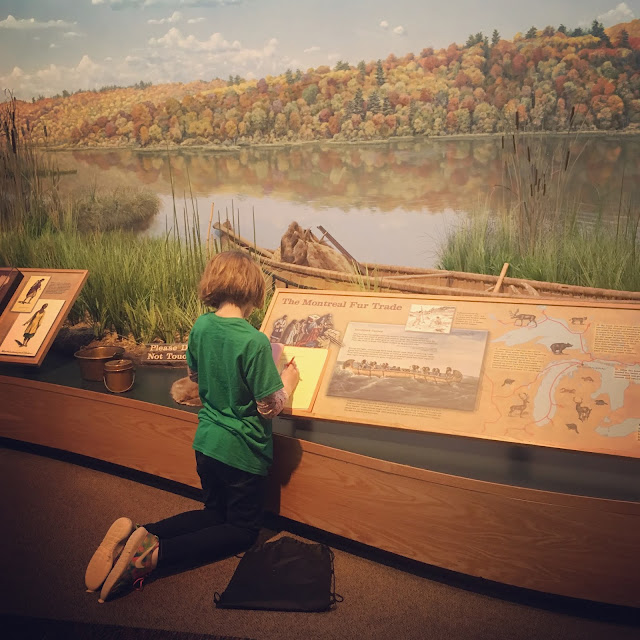 In fact, I'm pretty sure that when she had her first attack she played down how bad it was because she didn't want to miss the last day of the field trip. 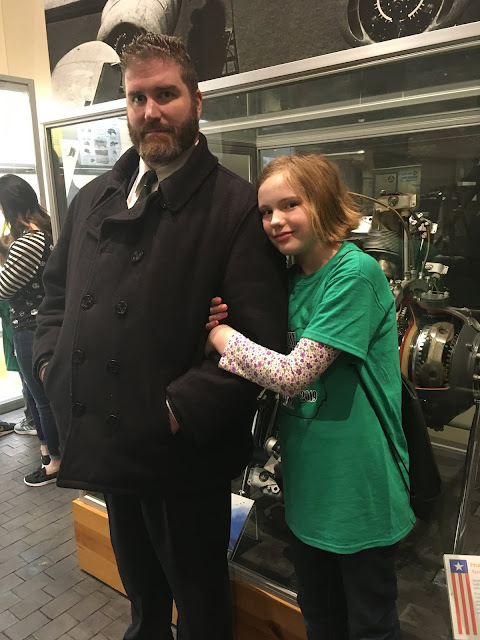 I got to go to one and a half of the days, and Paul even swung by one day after getting out of court, and it really was that amazing:

In totally unrelated news, I have been working hard with Little Miss Runner on coming up with running solutions. One of those solutions is to go on one or two runs a day. 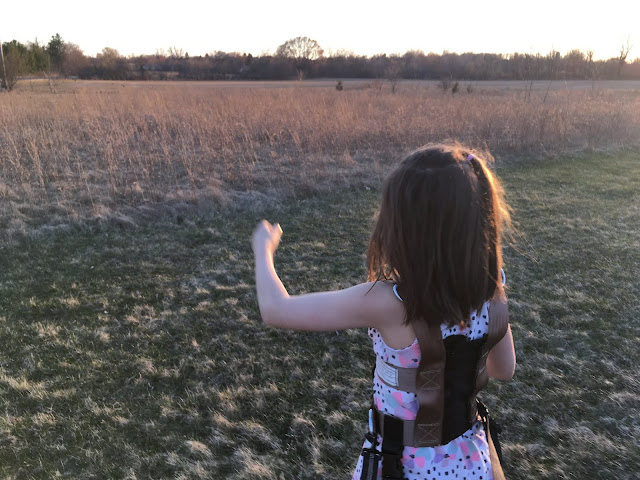 So far it isn't decreasing her eloping. But she is super happy. And that isn't a small thing at all.

We run connected by two leads and a harness. I'm enjoying it almost as much as she is!

In other news, I am "almost fifty" according to Sadie (also known as 37), because it's all the same when you're ten. I had one of the best birthday's ever, because it was absolutely uneventful in terms of any sort of disasters, everyone was healthy and we spent time together and had fun.


And Maggie spontaneously told me "Happy Birthday."
And that is exactly what makes a good day around here.

That is the latest around here! I had no idea I had so much to say! Hope you are having a lovely start to spring.

Oh and I almost forgot! Chapter 11 is up! And for about three days last week I was ranked #3 in action, which was pretty exciting!