WIWS and a little about our religious education plans

Today Sadie and I were up and dressed for Mass when we found out that Paul was sick and in an effort not to spread whatever virus he had was staying home.  So Sadie and I made sure he was okay watching the three little ones for an hour and a half while we ran down the street to Mass.

Sadie snapped this picture of my outfit: 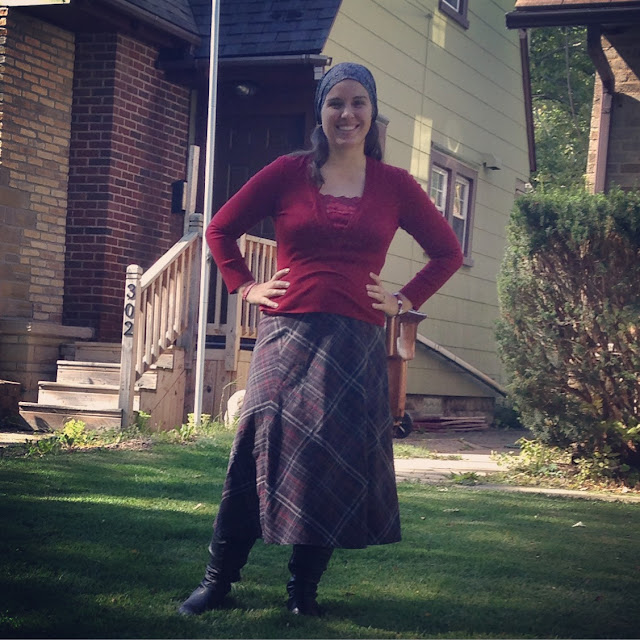 The headcovering is one that I made, the sweater is a gift from Paul from Christmas of '06 and the skirt is one that I got to wear on our pilgrimage to Israel in November of '08, when I was 8 weeks pregnant with Sadie (and found out the night before we left).

The boots are one of two Hush Puppy pairs of boots that I have and I have to say those two pairs are the first boots that I've had in years that didn't wear out in a few short months.  I've had them for over a year and they're still in good shape. 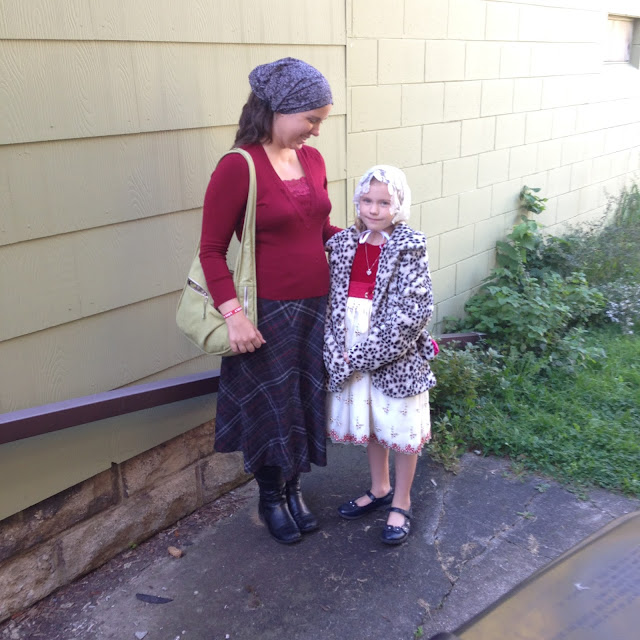 Sadie told me that she wasn't sure that her jacket was fancy enough to go with her dress, but when she stepped outside and felt the chill in the air she decided that I had been right to insist on something warmer.

In religious education news, I purchased the faith formation program we'll be using with Sadie this year, this afternoon (and was thankful that it was the same one we used last year).  Towards the end of August I started looking for information on when the faith formation classes would be starting at our parish.  We've always done faith formation as part of our homeschool (the Faith and Life program), but I was also planning on signing her up for the program at our parish.

After having Paul go by the office once and call a second time we finally figured out that there are no longer any classes offered in a classroom setting and the kid's faith formation for grades 1-8 is now entirely online.  So I guess that takes care of any questions about whether or not it would be okay to homeschool for religious education here, even though that wasn't what we were planning.

We actually go to a large parish (since that's the first question people ask when they've heard that the program is online) and have thankfully discovered a Little Flower's Girl's Club, so she will get a chance to have one social activity at the parish.

I can hardly believe that she's in second grade and the year she's been anticipating for so long has finally arrived.  It seems like just yesterday that she was a three year old trying to convince every priest she met that she was old enough to receive communion.  I realized the other day that she hasn't tried that in a very long time... since around the time Patch was born.