So much has been going on with Maggie lately, and there's so much that I want to remember, that I thought I'd do a 7 Quick Takes: Maggie Edition to catch everyone up.  Here's the latest.

Last night while I was in Maggie's room at bedtime she was sitting with me on the floor, chatting about mermaids and Bubble Guppies, when suddenly she looked at me and said "Mass!"  "Mass?" I replied, not sure I'd heard her correctly.

99% of our conversations revolve around mermaids, the names of her playmates at therapy, food, using the bathroom, and labeling colors.  Most sentences involve one to three words. 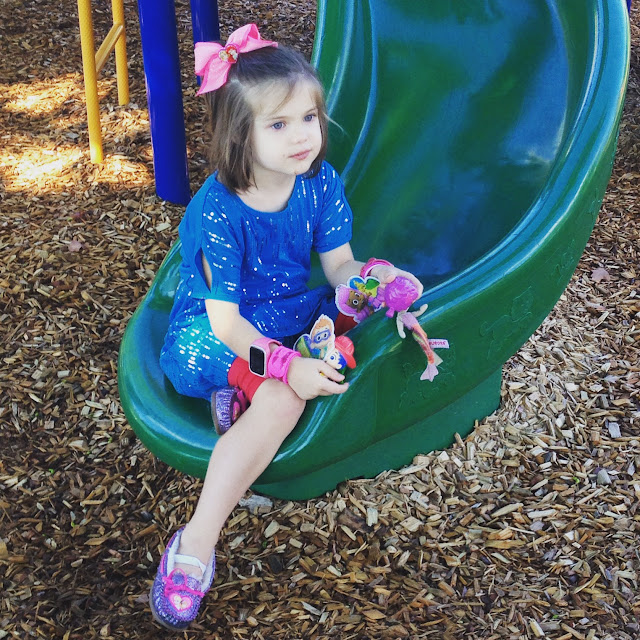 Tonight I was sitting with before she went to bed again.  She had climbed into my lap and we were singing about mermaids , but I could tell she was ready to go to bed, and she touched the door to let me know she wouldn't mind if I left her alone to go to sleep.  Before I got up she grabbed my hand and brought it up to touch her forehead.  "Father, Son..." she said before pausing, looking expectantly at me.

And so I helped her make the sign of the cross and say her bedtime prayers and slipped out of the room so that she could have the alone time as she drifted off to sleep that she needed to decompress from a busy day. 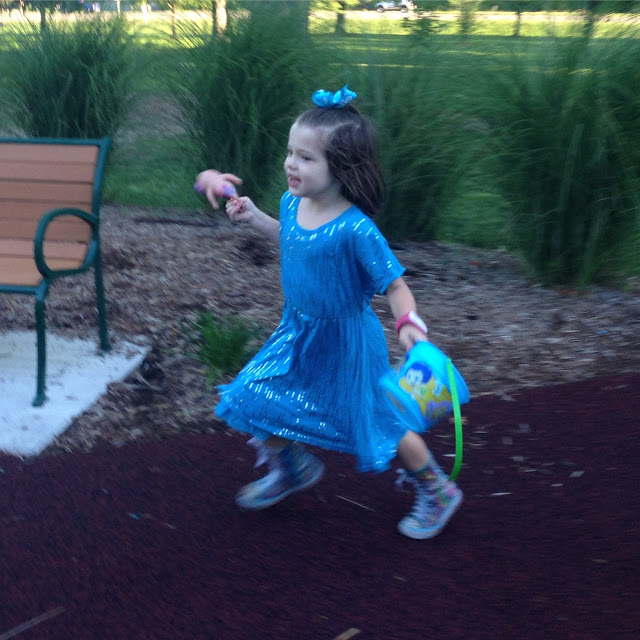 Yesterday was Paul's and my tenth anniversary.  It's a doubly special day, because it marks ten years from the day we were married and eleven years from our first date.

Feeling particularly brave, we took the kids to an early dinner at one of our favorite restaurants. Dining with five kids, eight and under, we've found that sometimes eating an exceptionally early dinner can be helpful, since restaurants are pretty empty if you dine at four in the afternoon (which can be helpful for those with sensory issues too).

Maggie is actually, generally, our most well behaved child when it comes to eating out.  She is serious about her food, when she can be bothered to eat (which is helped by the fact that she likes going out to eat).

Just before dinner arrived, however, she started to cry, quietly.  With a few words she managed to tell us that she'd lost her mermaids hair (it's a doll with several colors of hair that click on and off).  Paul took her out to look for the hair in the car, before remembering that it was actually in his car, from their drive to school that morning (in other words, it had been missing since 7 am, but she'd just noticed it).

She managed to calm down a few minutes later, and was fine by the time the food arrived, but before I'd taken a bite of my spaghetti I was surprised to find that she was attempting to steal it off my plate.  I looked at her, surprised.

Maggie doesn't like spaghetti.  She doesn't like meat balls either.  She had pizza, which she loves, sitting in front of her.  And she was trying to swipe my dinner off of my plate.

When I asked her what she was doing, blocking her little fork from absconding with my meal, she made it clear that her mermaid doll, Molly, likes spaghetti.  She held her doll up to my plate and made a tiny clicking sound with her tongue to show that her doll was eating and that Molly liked spaghetti.

So I took a tiny bit of noodles and put it on an appetizer plate and Molly was able to have her dream meal, while the rest of us enjoyed our little celebration. 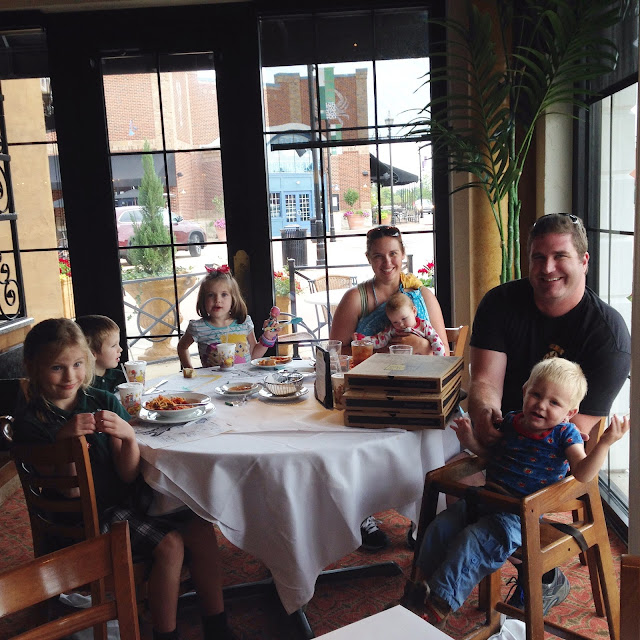 This is a big deal because, generally, one of the things that you hear when your child is diagnosed with autism is that they struggle with imaginative play.

While Maggie certainly doesn't play with all toys the way that their intended, her imagination has always been pretty amazing to me, usually involving her using her entire body to act out what's happening.

If she gets a tiny toy plane, she'll climb up on a table and put the plane down under her, and pretend she's above it, riding it.  If she finds a tiny doll sized mermaid tail, she's putting it over her legs and is immersed in the fantasy that she's a mermaid.

Her pretending to feed her doll was one of my all time favorite moments.  Even if it did involve my dinner. 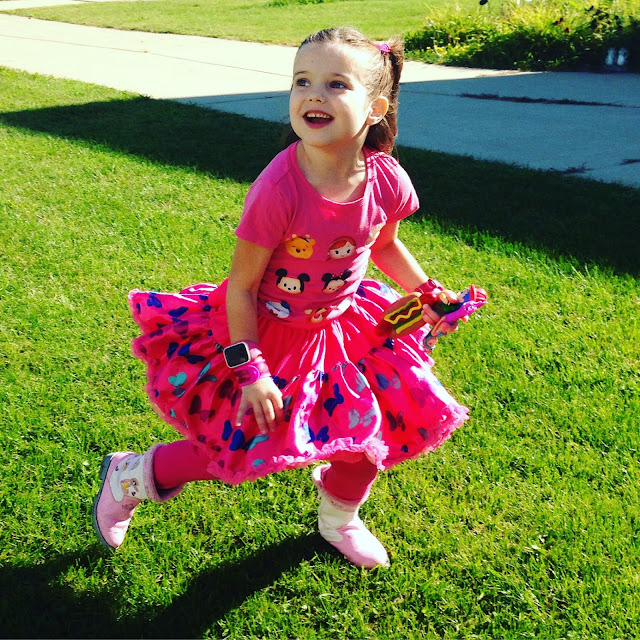 When Maggie gets out of therapy for the day the first thing she does is check on Tessie.  Her entire face lights up.  She still adores James, who has always been her baby, but Tessie is being added to list of absolute favorite people as well. 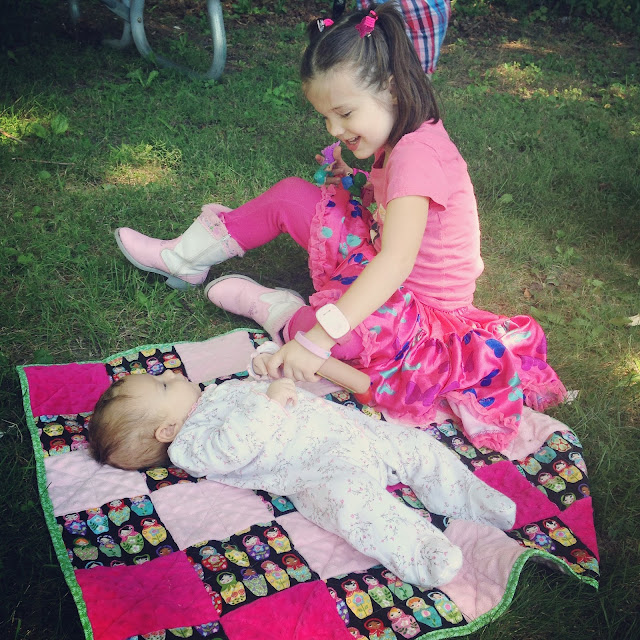 If you follow my page on Instagram, you've probably noticed that Maggie has decided that having her hair pulled back isn't the worst thing in the world anymore.

And that bows are another wonderful way to express her very creative fashion sense.

I love it too. I just love being able to see her face: 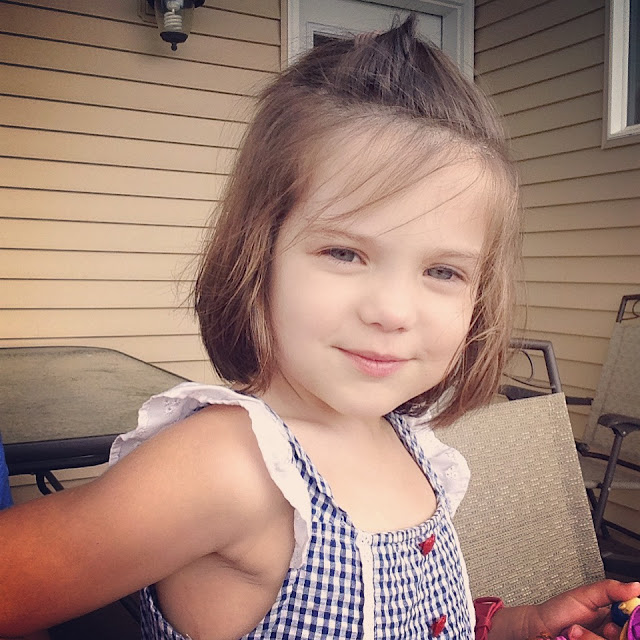 I've caught on to something that Maggie does rather frequently when she wants the house to be peaceful.  She'll make it known that she wants to go outside.  Then when I unlock the back door she'll go outside, and will be immediately followed by all the other kids.

Once their happily playing and out of sight of the door, she'll turn around and traipse back in and go off to enjoy the peace and quiet that she's managed to create.

I'm kind of in awe of this strategy.

And after watching her do this around a dozen times in the last month, I have to say, it's got to be intentional. 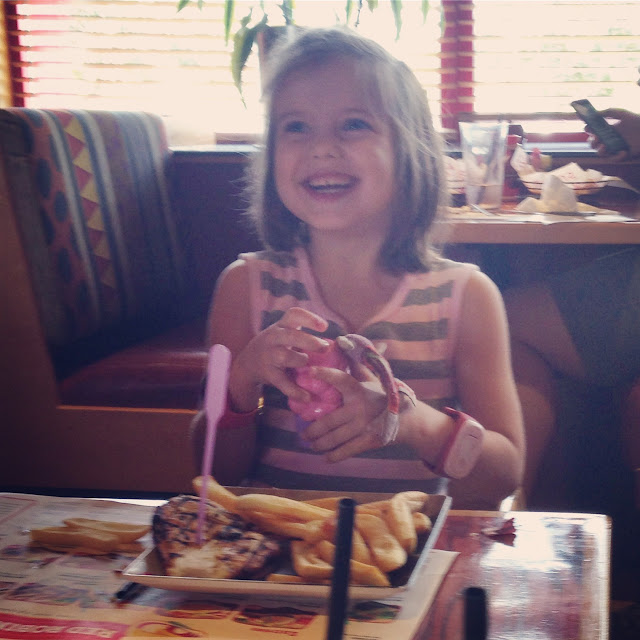 For more Quick Takes head over to see Kelly at This Ain't the Lyceum.
Posted by Cammie Diane at 9:54 PM