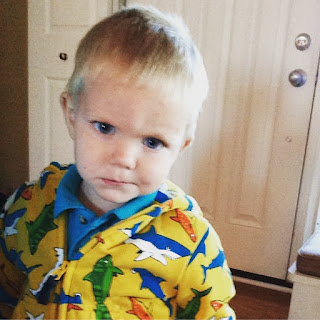 There were pretty much three minor(ish) childhood maladies that I had dreaded and somehow managed to avoid thus far.  They were, in order from most dreaded to least

As you may have gathered, we had avoided all of them up until this week.  Now we've still avoided #1 and #3 (thank heavens because I cannot imagine dealing with #1 with a child who is terrified of getting their hair wet).  But 2.  The dreaded HFMD.

Growing up in California, I'd never even heard of Hand, Foot, and Mouth Disease.  I first heard of it when we were in Florida and decided that it sounded like the least pleasant sickness I'd ever heard of.  And I've seen announcements of outbreaks on the news multiple times in the last four years since we moved to Michigan.  And every time I would think "Oh please.  Not us.  I can't deal with that."

And somehow we escaped each summer and fall unscathed.

Until now.  A few days ago Patch came down with a fever.  After twenty four hours the fever broke and, while he was slightly whinier than usual, he seemed to be back to normal, zipping around the house on his scooter. 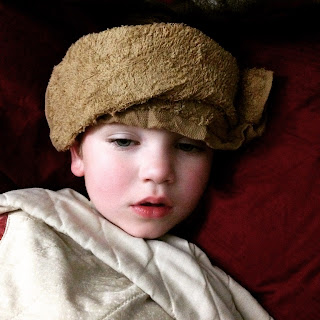 After twenty four hours fever free I sent him off to school.  I noticed he had a rash, about the size of a quarter, but the child has battled eczema since he was a newborn, and so I figured I'd put some cortisone cream on it if it didn't clear up and that would be it. Besides, after a June and July virtually free of mosquitoes, we've been hit hard with them since August and they adore this child.  And he'd spent all afternoon yesterday running around outside, so whatever wasn't eczema was likely mosquitoes.

Three hours after Paul dropped him off, I picked him up from school at the end of the three year old class day.  The rash was bigger.  It was around his mouth.  With dread I looked in his mouth and then at his hands.  There were tiny red bumps everywhere.  I didn't have to look at his feet to know what was happening.

We informed the school.  And then yesterday afternoon I informed Maggie's school that one of our other kids had it, although neither girls show any sign of being sick, just so that they would know to be on the look out in case she started to feel sick.  This morning I received a letter back saying that they had a confirmed case at her school (yesterday).

This morning at James' genetics appointment he had a fever and the beginnings of the rash... so it looks as if both of our little guys have been stricken by it.

Because I really don't want to see this little sweetness... 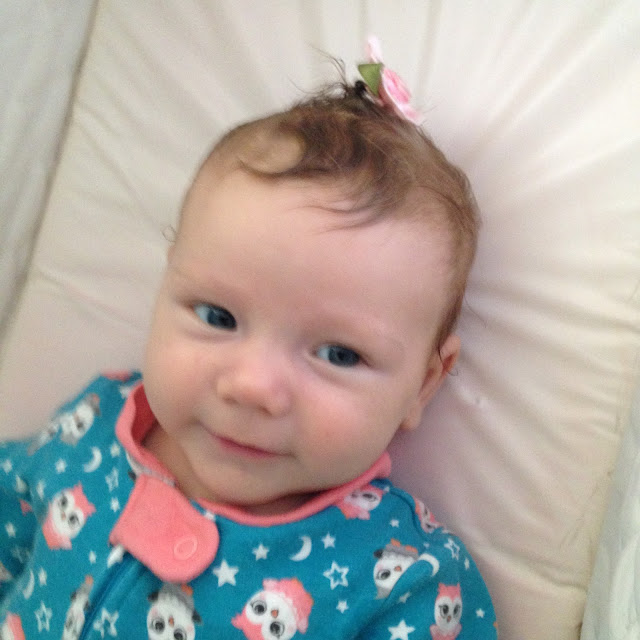 I suspect Maggie may have had it and fought it off without getting any symptoms.  A week ago she had a few days where she basically slept constantly... and while she never had a fever or a rash, I do wonder. She tends to sleep 20 hours a day when she's sick, refusing food and that's not far off from what happened last week, minus the fever.

Aside from that, I am curious.  Did anyone else grow up in an area where they hadn't heard of HFMD?  In my head I'm equating it with more humid areas/times of year, just because it seems like that's when I hear about it, and I was wondering if that's accurate or not!
Posted by Cammie Diane at 10:12 PM