December is flying by and winter break is already here.  Here's the latest news.  It's almost a Quick Takes but I couldn't wait until Friday.

For the first time since the girls were tiny we got pictures taken at the mall, this time with a "sensory friendly Santa."  We'd signed up in advance and showed up on Sunday morning before Mass.  I was impressed when we saw that there was a waiting area with tables with coloring sheets and crayons, snacks, a play area, and a movie area with bean bag chairs everywhere.

And this?  One of my all time favorite pictures. 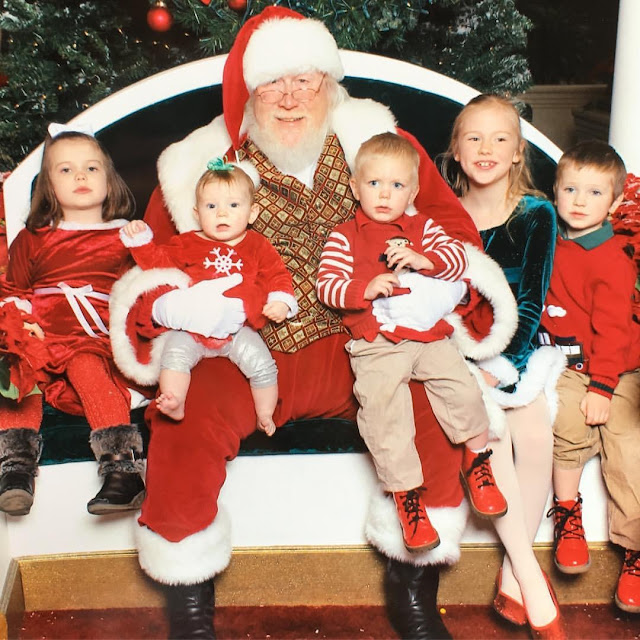 We almost had tears when Patch thought that he wasn't going to get to sit next to Sadie, but when he found out he could sit with her disaster was averted.

I snapped this on one of the last days before our world became an icy winter wonderland.

James was a big fan of autumn.  He is not a big fan of winter.  I have yet to convince him, even completely bundled up in snow clothes, to play outside in the snow.  He cries when I suggest it.  He is incredibly suspicious of snow.  He'd spend hours outside in the non-snowy cold.

But snow?  Not a chance.

Puddles are more his thing: 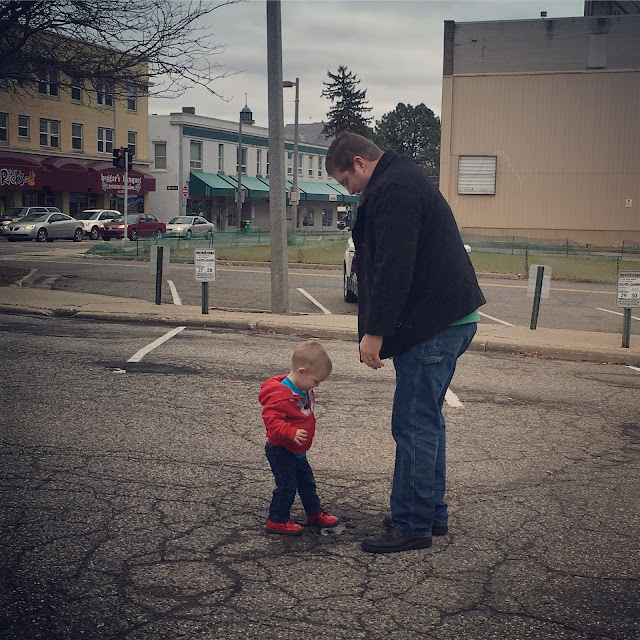 We attempted to make gingerbread houses.  I'm not sure that you can say they were a success but the kids did think that they were tasty. 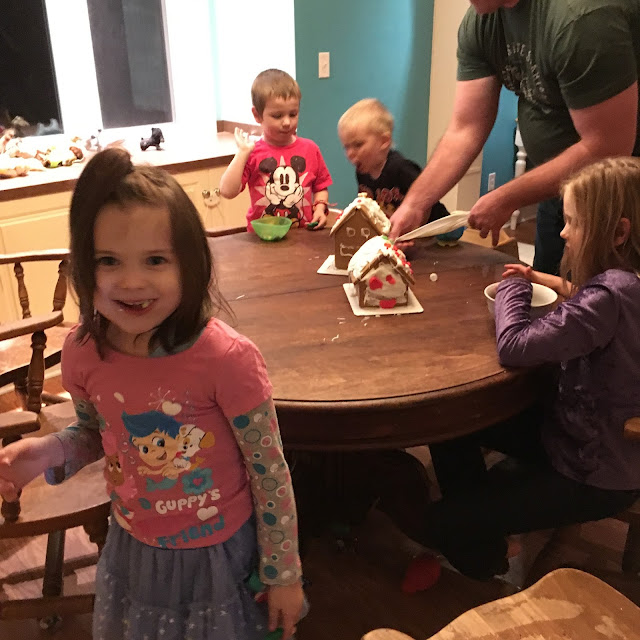 And I was ridiculously excited that I could buy the gold chocolate coins for Saint Nicholas Day this year. 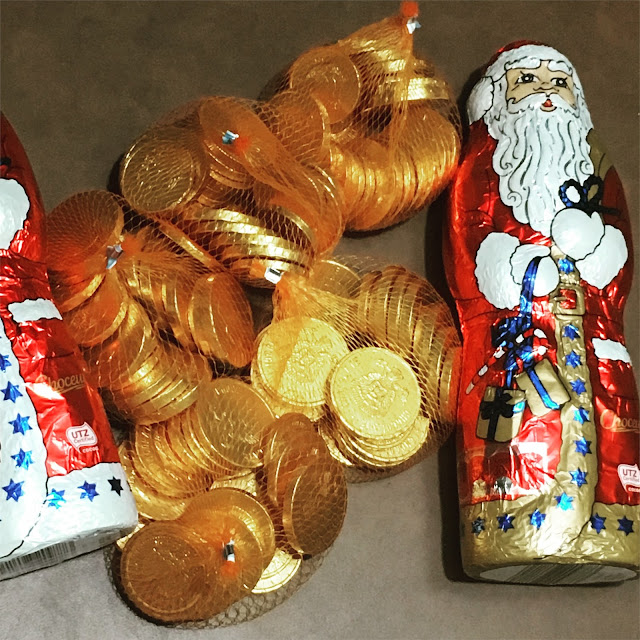 Patch and Tessie are adorable together.  Last night Patch told me: 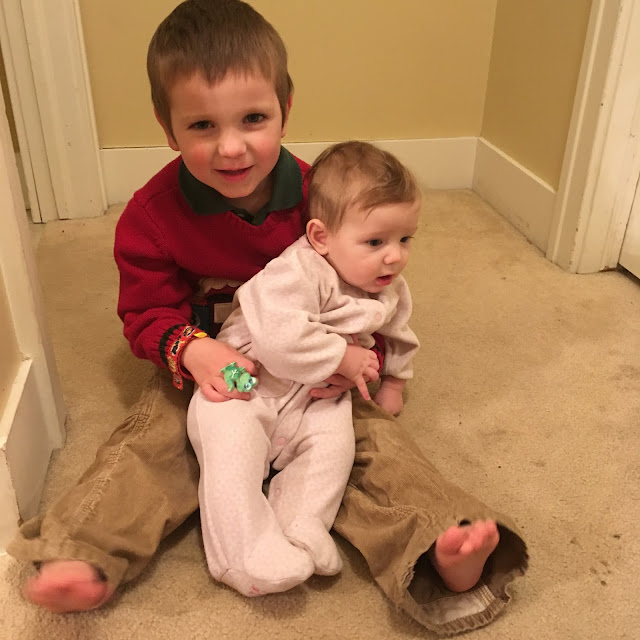 Tessie also had her first neurology appointment.  I came home with a to do list.

The main concern wasn't her lack of eye contact or missed milestones. The main concern at this appointment was her "hypersomnia" or the fact that she sleeps a lot, around twenty hours a day.

Who knew that a baby could sleep too much?  Not me.  I mean, with my other kids it wasn't something I ever thought of.  After all sleeping too much?  It sounds kind of nice.

Apparently too much sleep really can be too much of a good thing.

During the appointment at one point her doctor said, "Does she really sleep that much?  I mean, she's awake for this appointment."  And I pointed over to where she'd fallen asleep in the ninety seconds since he'd finished his neurological exam.  After that he started ordering tests.

After the appointment I scheduled the sleep study.  I took her to get her lab work done, and I set dates for Missouri and Massachusetts for the MRIs and EEGs.

And if I'm totally honest I have to admit that I expected that the blood work would come back entirely normal.  After all, we've gone through all this before and it's always been normal.  And when I didn't hear anything for a little over a week I forgot about it. 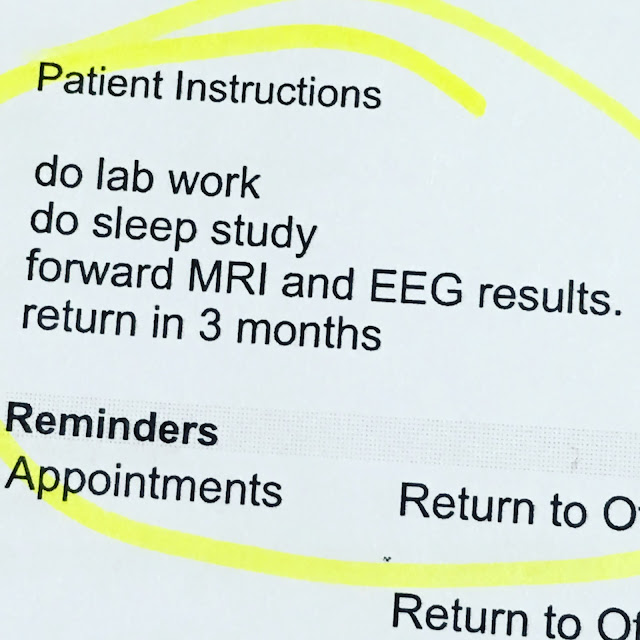 Then we got a tree.

Now, a tree around here is a big deal.  Last year was the first time we'd gotten a real tree.  In the years before we'd put up a little fake tree, on the fireplace mantle, while praying that Maggie wouldn't somehow destroy the whole thing.

Last year we got a real tree, that was fairly big, but we put the tree up on an entertainment stand where it was less tempting.

This year we got a big tree and bolted it to the floor.

And she hasn't touched it.  A certain toddler has taken apart a few ornaments but other than that it's in one piece.  We're all pretty thrilled. 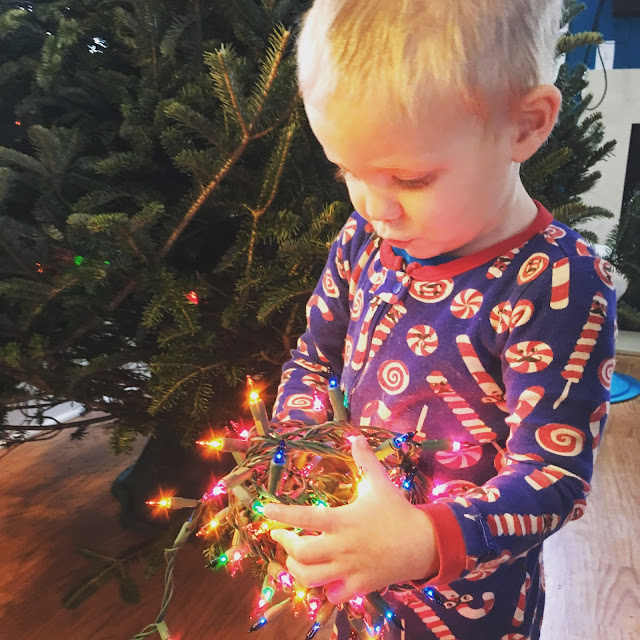 And we celebrated Saint Lucia's Day.  Sadie managed to slip downstairs with me before anyone else was awake.  She walked upstairs through the bedrooms with only her crown lighting the way and it was really fun.

The highlight for me was James who was laughing and calling "Sadie!  Sadie!" from his crib the moment her crown of battery powered lights came into the room. 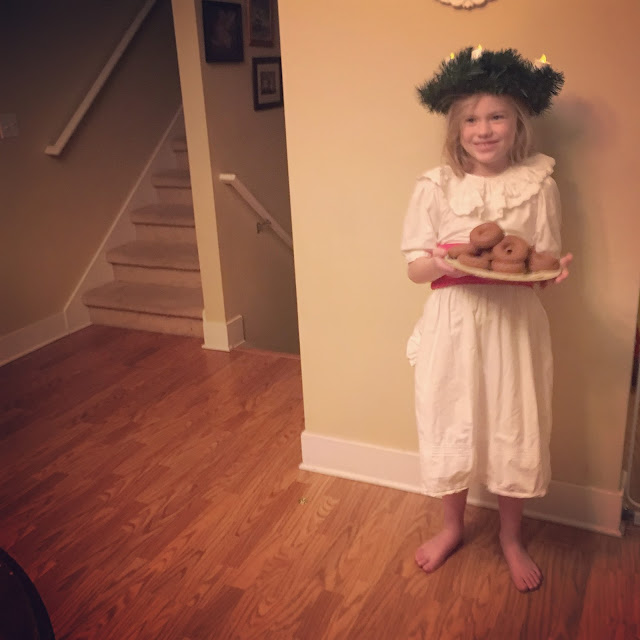 Patch was a shepherd in his preschool nativity play.

We didn't have anything shepherd-ish so I sewed him a costume.

Paul pointed out that he looked more like a little Jedi than a shepherd.  So I googled Jedi images and realized that he has a point. 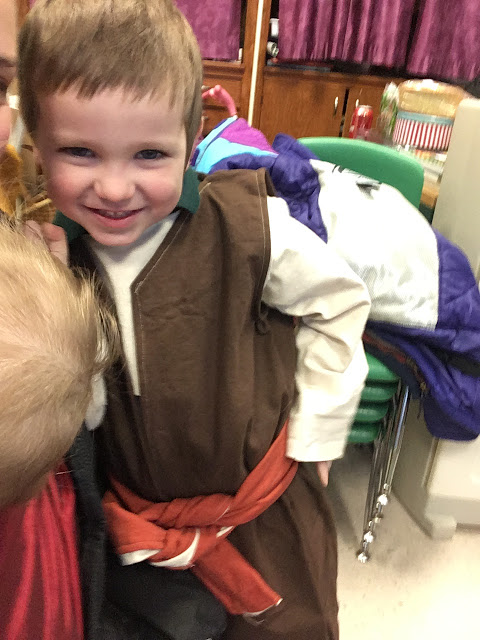 James maintained his title of "Grumpy Baby" by coming with me the last two times I've gone shopping and shouting "Don't touch that!" every time I reached to pick something up.

He also had an OT evaluation (for sensory stuff) and got measured for new orthotics because his are already painfully small.

He's enjoying wearing the clogs that his orthotics wouldn't fit in while we wait for the new ones to be made. 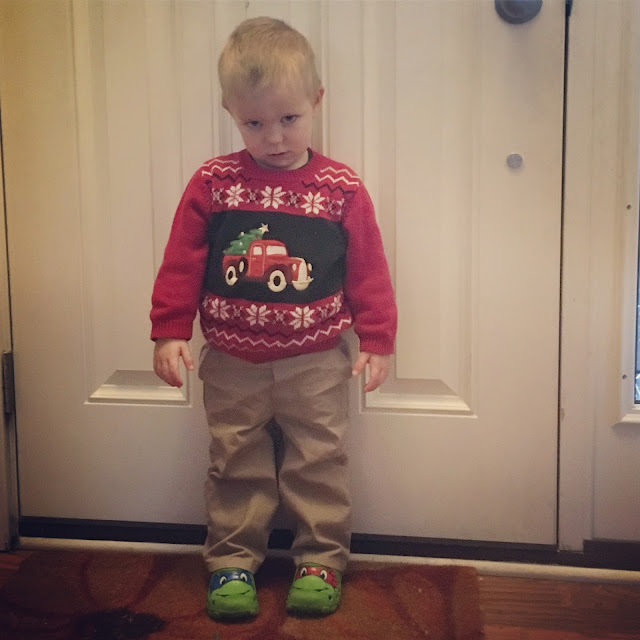 Another highlight was a special sensory friendly night at the local zoo.  There was Christmas cookie decorating, soup, ornament making, and a walk through the snow to look at all the lights and Christmas trees.

The other sensory friendly event we went to this month was a sensory friendly airing of Moana.  When we walked in I whispered to Paul that I thought we had a 50% chance of success (despite the flier that said that screaming and running were fine).  He whispered back that he thought our odds were closer to 10%.

The last time we tried a movie, in June, Maggie was immediately overwhelmed and grabbed my hand and begged to go before the opening credits were over.

This time with the lights turned up and the sound turned down she sat, completely silent, in her seat for the entire movie, with a huge smile on her face.

I am so grateful for all the sensory friendly opportunities we've had lately.  As she's getting older we're able to go out and do so much more. 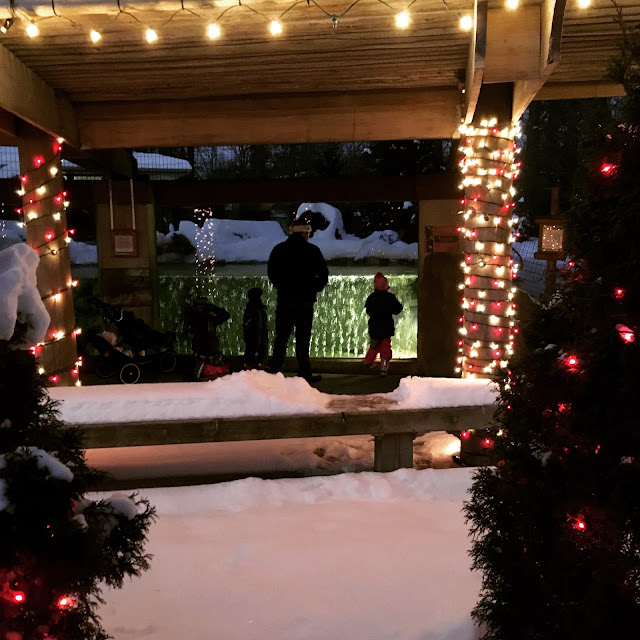 The highlight of the month for the kids has been the snow.  They can spend hours in our backyard sledding from the top of the hill to the bottom of the yard.

Patch is determined to shovel the snow out of the backyard like Daddy and Mommy shovel the driveway.

However apparently one side of our house is a wind tunnel and the wind moved a massive amount of snow from the side of our house (where nearly a foot of snow is now bare grass) to the driveway where I opened the door and found myself up to the tops of my boots in snow, trying to figure out what happened (I was confused for a solid ten seconds).

I know it's windy here but I didn't know it was move all the snow from the side yard to the front yard windy. 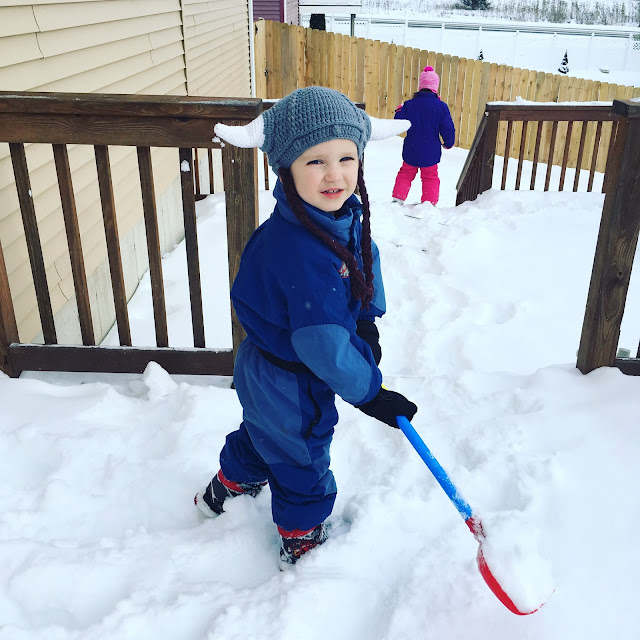 Which brings me to this week.

Earlier this week I got a call from our neurologist's receptionist.  I actually started completing her sentences in my head before she said them.  This office calls about all their test results and he sees both Maggie and James so I've gotten this call quite a few times and I wasn't expecting anything abnormal.  "Hi Mary-Therese's mom?  This is the receptionist from Dr. D's office.  We got the test results and their normal."  I said the last sentence silently in my head before she said them.

Except she didn't say them.  She said "We got the test results and the ammonia levels in Mary-Therese's blood are elevated.  Dr. D wants you to call back if you haven't heard from us the week after her sleep study to run more labs.  Make sure not more than a week passes."

I got off the phone and told Paul that he couldn't be too worried if the was willing to wait a month for new tests.

Today my phone rang. It was the nurse from the same office calling to tell me that James' orthotics prescription had been faxed in.  I thanked her and hung up.  Then I kicked myself for not asking her about Tessie, because I've spent the week worrying about what high ammonia levels in blood tests mean.  Five minutes later the phone rang again.

It was the same nurse.  She was calling to tell me that the doctor had reviewed the tests and Tessie has elevated ammonia levels in her blood and that I needed to take her in for blood and urine tests, to check amino acids and organic acid levels.  This time I did ask her what high ammonia could mean and she said that she didn't know and he hadn't made any notes of what he might be thinking it meant.

I got off the phone and got the kids loaded into the car and picked Paul up at his office so that he could watch the other kids and took Tessie in for the tests and now we're waiting for the results. 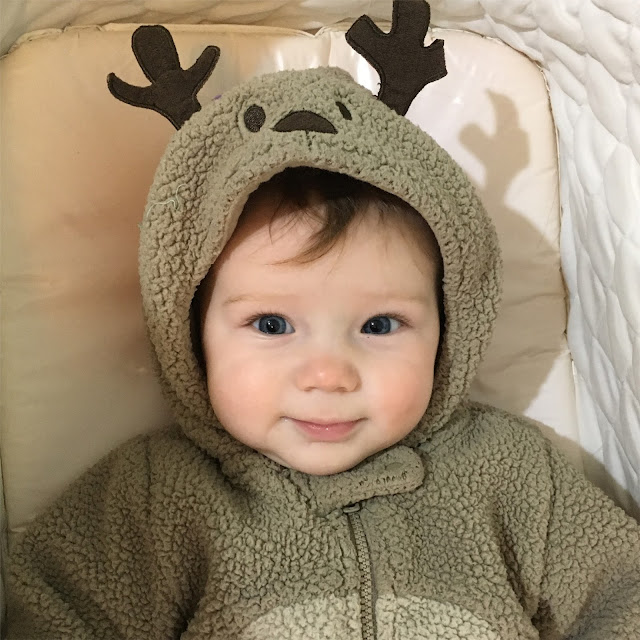 She is still my perfectly happy cuddle bug.  But I'll admit I'm worried at this point (google is not my friend) and I'm really praying that the next phone call comes quickly and says what I expected the last one to say.  I'm ready to hear "We got Mary-Therese's test results and they're normal!"

If only I could combine James and Tessie's hours of sleep and divide them in two... then everybody would be getting a good nights sleep without going overboard (and without waking up like a certain toddler sometimes does).
Posted by Cammie Diane at 10:48 PM