I'm not even sure if I should write about it.  I am because writing is how I process things.  But I feel like it will take a long time to finish processing this.

Yesterday Paul and I found ourselves faced with a horrible, horrible choice and I spent most of the day in tears, or trying not to cry, first in the car on the way for Tessie's first neurology appointment, then in the car waiting to pick up Patch and then as I walked into Maggie's therapy center to drop off her lunch.  Paul described it as one of the hardest things he's had to do since becoming a parent. 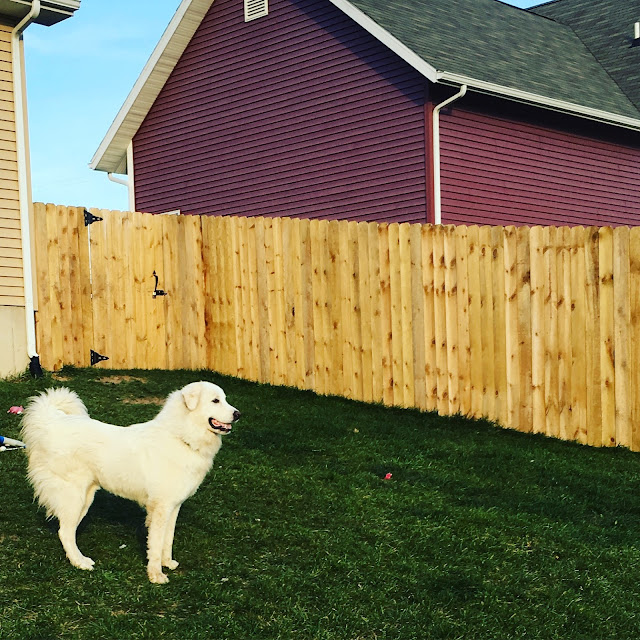 When we brought Lily home, fourteen months ago, I never imagined that our lives with her would end so abruptly.

It started when I saw an add for Great Pyrenees puppies.  We'd been talking about getting a dog for a long time.  We'd been scanning the humane society websites in our area, but they were filled almost entirely with pit bulls and chihuahuas.  We knew we wanted a larger dog, and having had a pit bull mix growing up I didn't think that that was the greatest choice for our bunch, and nearly all the non-pit bulls that came up on the shelter websites said that they were not for homes with small children.

I had images of the cartoon Sebastian and Bell in my head as we began to learn about the Great Pyrenees as a breed.  We liked what we saw.  We emailed the people with the puppies.  We drove two hours north west to their tiny farm.  They had three dogs, who we met, and a littler of puppies.  The people were incredibly nice.  The puppies were tiny little balls of fluffy white fur.  We paid a deposit and drove home.

On Halloween day Lily came home with us.  She was Patch's birthday present. 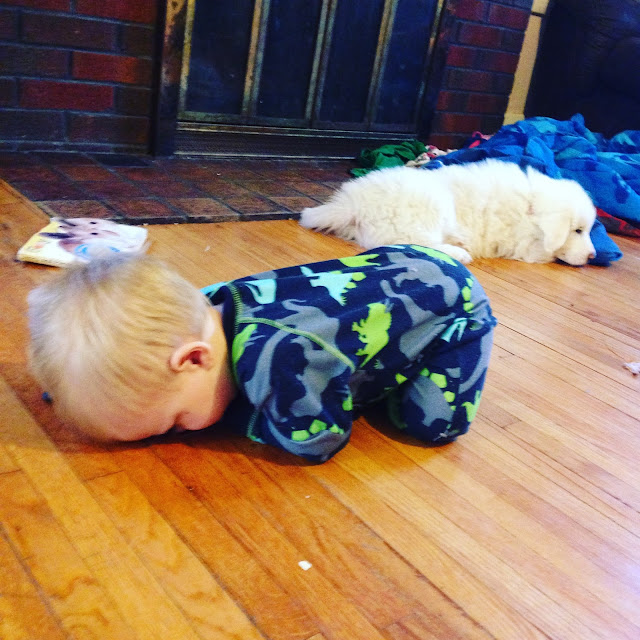 After we got through the puppy teething stage she was incredibly gentle with the kids, especially James.  He was her favorite.  He could take food out of her bowl and feed it to her and she would sit and watch him indulgently.

This summer something began to change.  If the kids were running in the yard she would get upset, like she thought that they were going to hurt themselves, and would lightly grab them by one arm and throw them to the ground.  For a while she wasn't allowed down in the lower yard when they were out.  But we worked on it and by fall she was out running around and playing with them on the grass again.

In the last few weeks something suddenly changed.  She started biting.  She was leaving marks.  She bit Patch and Sadie on the hands.

I made strict rules about food, since the problems seemed to suddenly revolve around food.  No kids around when her food was out.  No human food out when she was out.

Then she bit James on the hand.  James, her baby.  Because there was an apple in the room, that neither of them were eating.  And she bit Patch on the face and neck.

She didn't break the skin, thank goodness, but she left a nasty purple bruise and he was terrified of her.

We didn't know what to do.  We kept her completely separated from the kids, but I was on edge.  She could break out of her kennel if she wanted to.  She had before.  She was incredibly strong.  And on Sunday she began snapping at Paul and me when we let her in and out tried to let her into the house.

By Monday morning I was afraid of her when I let her out to go to the bathroom.

Now to back up, before this she was incredibly obedient, especially for a Pyrenees. When I told her to sit she'd sit.  She was cuddle and affectionate.  If she chewed on something she wasn't supposed to she would follow me around, putting her head under my hand like she was apologizing.  This transformation was sudden and unbelievable.  It was a nightmare. 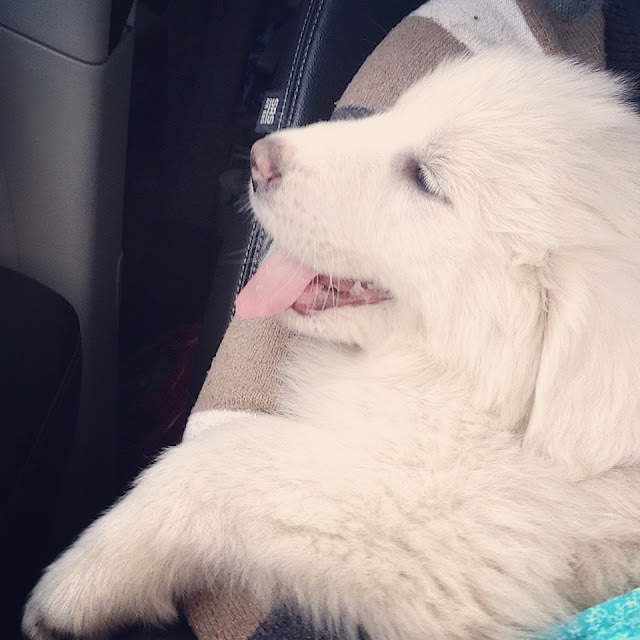 On Monday morning we called the state Great Pyrenees rescue.  That night Paul spoke with the director.  He told her what had been happening.  We were dreaming of a farm somewhere without kids, where she could live out her days.  And then the news came and it was horrible...

We were the fourteenth call she'd gotten this year for the exact same condition.  All the dogs were from the same area.  She believed that someone was breeding dogs that shouldn't be, that something was wrong with a line of these dogs somewhere in the area and it's spreading.  Something was wrong with their brains.  Great Pyrenees don't do this.  They don't snap and start attacking humans.  They don't bite and especially not children.

She said that with the other thirteen dogs, the decline was rapid.  They became more and more violent.  One had burst out of its kennel as the owner walked by and chased him down and attacked him.  Then she snapped out of it and couldn't figure out what had happened, didn't seem to remember hurting him.

We needed to have her euthanized, immediately.  It was the only humane choice, she explained.

I sat at up Monday night crying and praying and wishing there was some other way.  We spoke to two vets yesterday.  The vets agreed, and said that she needed to be put down by animal control.

As I write this I'm crying.  I'm praying that we made the right decision.  But what other decision was there to make?  She's an enormous dog.  She could easily kill someone.  And how could we live with ourselves if we gave her up and she seriously injured or killed someone?

But still I'm so angry and sad... and I keep thinking I hear her barking outside, and start to run to let her in before she annoys our neighbors... and then I remember.

I'm going to post my favorite pictures of her here, through the years.  The way I'm trying to remember her... 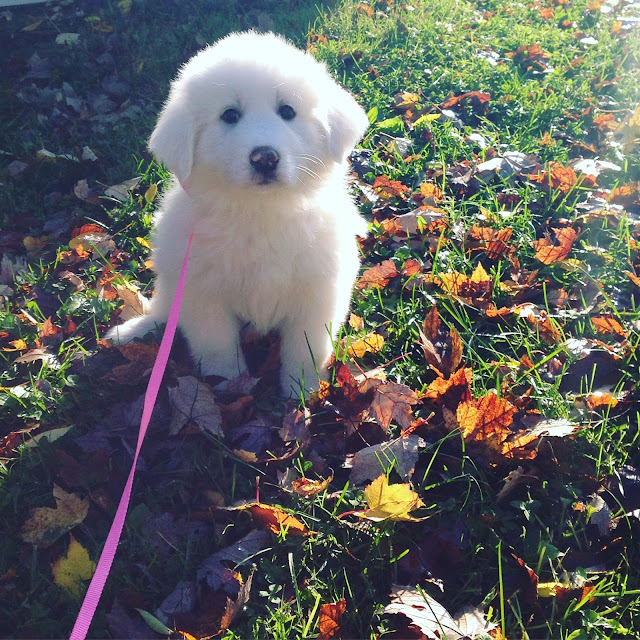 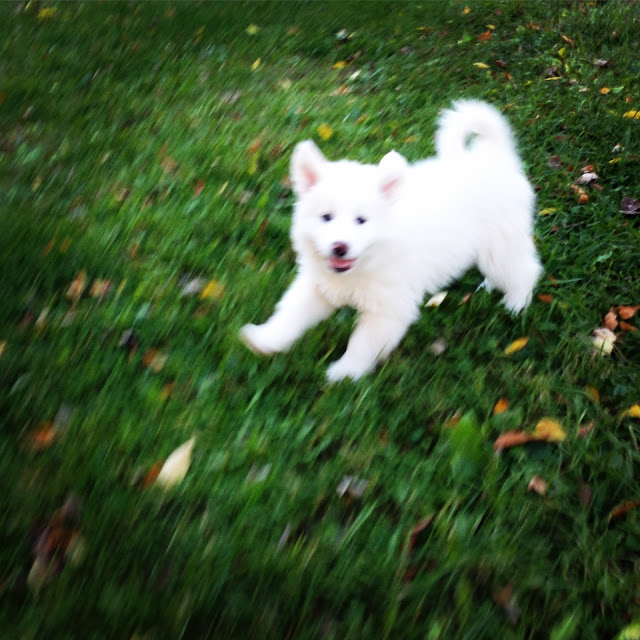 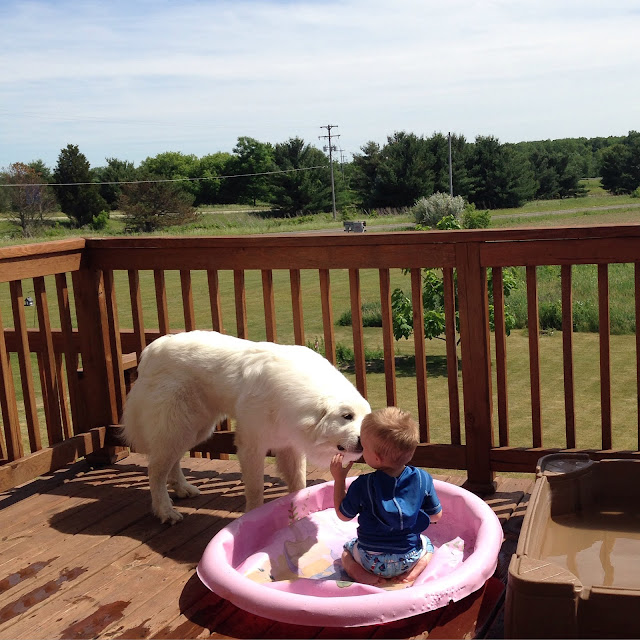 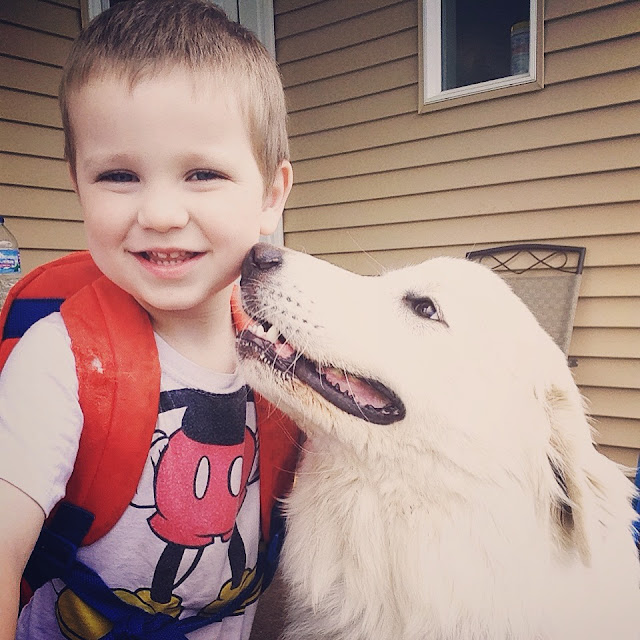 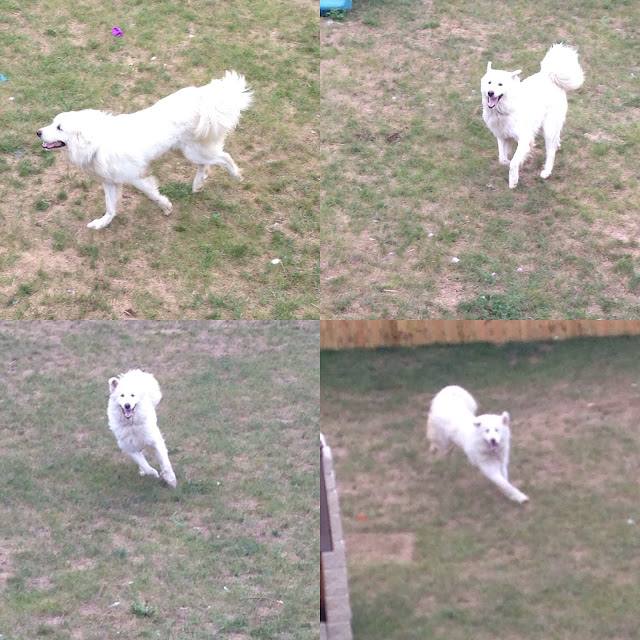 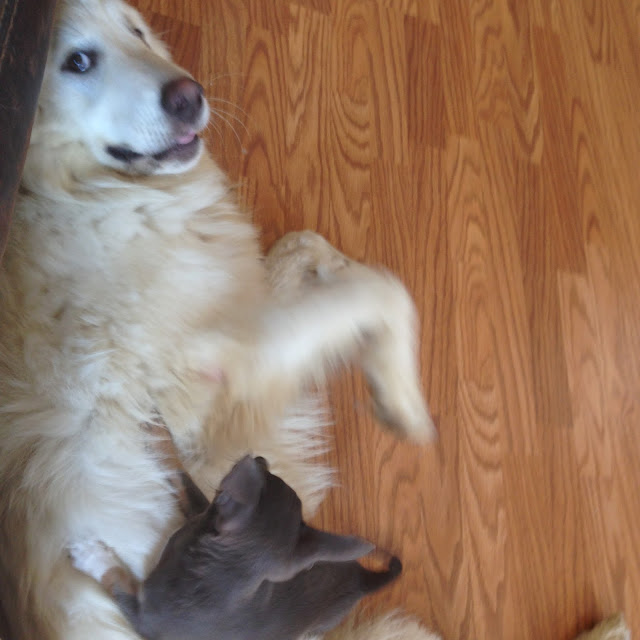 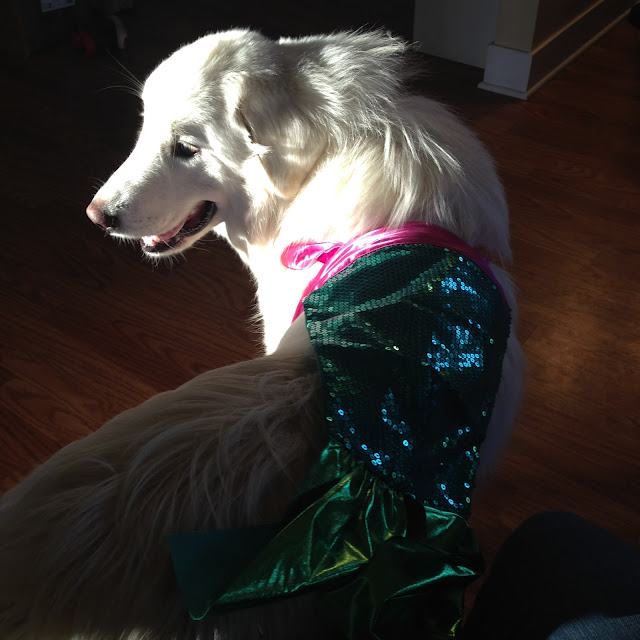 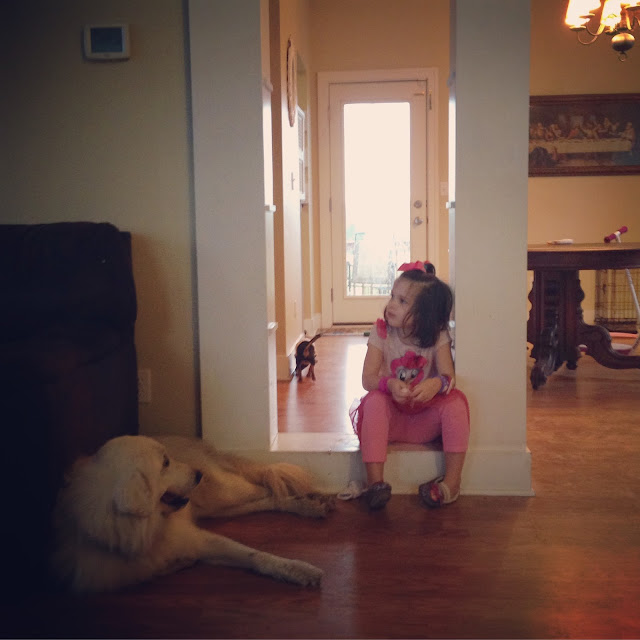 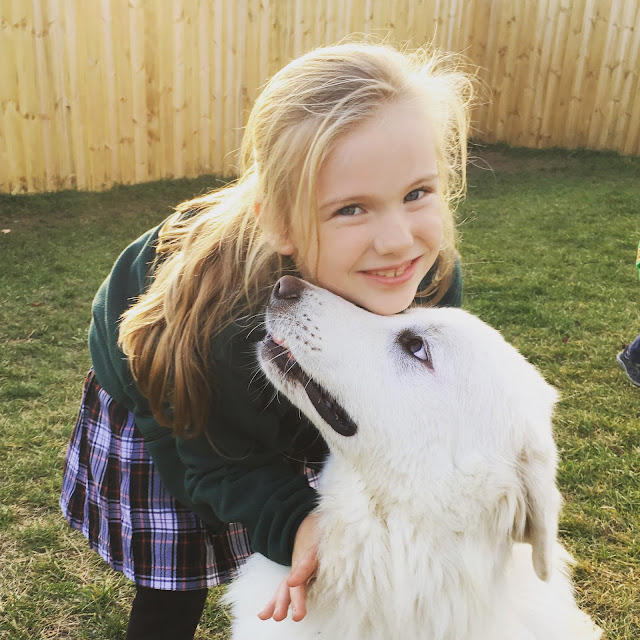 Please keep our family in your prayers.  This has been a tough week.
Posted by Cammie Diane at 8:01 AM