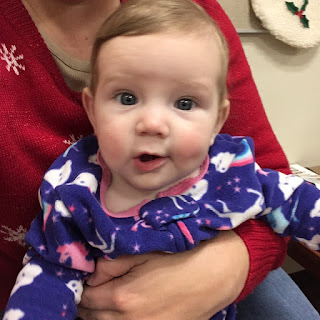 Patch had his well child checkup today and I managed to wait until the end of the appointment to ask if he could explain to me what high ammonia levels in Tessie's blood test results meant and what the neurologist is looking for when he sent the amino acid and organic acid tests to Mayo Clinic. And he was awesome.

He explained they're sending them there because they're the ones who run that test, because it isn't common, and that he's worried about a urea cycle disorder, which is a genetic metabolic disorder.

The good news though, is he brought up her chart and looked at the levels and said that she had gotten a 55, which is abnormal, but that when he's seen kids with urea cycle disorders their numbers were in the hundred to thousands, so relatively a 55 isn't that bad.

He said that if I thought she was worse that he would admit her, but since she's actually seemed slightly more alert this week I think we're seeing an improvement over how much she was sleeping before.

We won't get the new results back for a week or two but compared to how worried I was yesterday this is a definite improvement.

And that is the latest Tessie update!
Posted by Cammie Diane at 4:36 PM

Email ThisBlogThis!Share to TwitterShare to FacebookShare to Pinterest
Labels: Tessie