We Were That Car in the Drop-Off Line This Morning

Today I was THAT parent in the drop off lane.

You know the one.

The one that takes forever.

And I didn't even see it coming.

James is four and a half but as the fourth of five kids, he can tumble out of the back of the car with his brother and sisters like he's storming the beaches of Normandy. The kids have a tendency to race to get places, even when they're been told "okay, no racing," so I know that he can move.

Today however, took a turn when, after dropping Sadie off at Middle School I heard a small voice from the back say "Mommy. I have to tell you something." 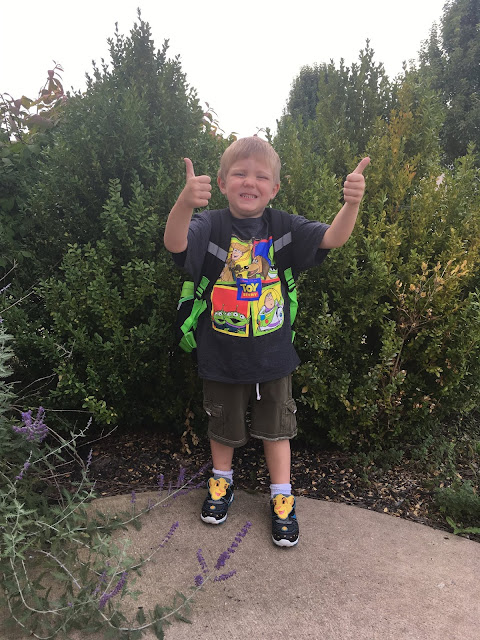 My immediate thought was "Maybe now, as I've just pulled into the drop off lane, isn't the best time, dearest" but there were about six cars in front of us, and no cars behind us, because it was still half an hour until school started and so instead I said "what's up Buddy?"

As someone who has not been with our family this past week, you may not understand how monumentally dangerous I immediately understood this moment to be.

There have already been hysterical tears over the correct placement of his Paw Patrol Water Bottle in his Green Slime Backpack twice this week (and it's only Thursday morning, so that's 2 out of 3 of the morning runs completed). Fortunately those other W.B. disasters happened before we left home, where they could be quickly dealt with. 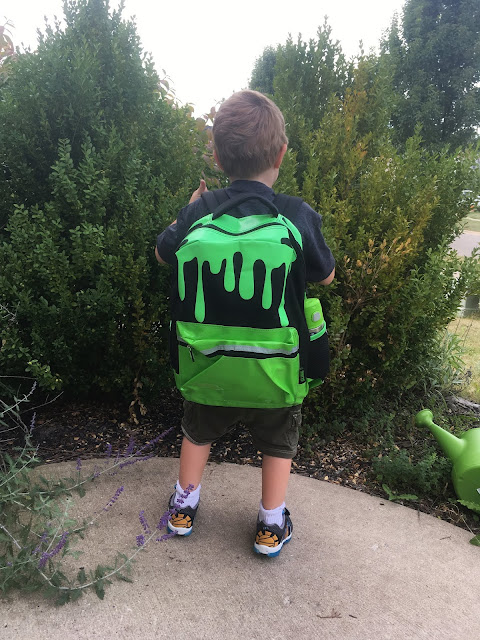 Now we were in the drop off lane. And getting closer to the front every second.

I did not ask why on Earth he was touching the water bottle in the car AGAIN, which I'm pretty sure means I deserve some sort of Mommy gold star towards a free coffee. Instead, as two cars pulled forward and we inched our way towards the front I said, in my calmest calming voice, "do you think you can slide it back in there Buddy?"

"NO I CANNOT!" he replied as we reached the front of the line.  As I glanced back I realized that his bones had been transformed into jello-y mush and he had now slipped down in his seat like the tiny puddle of preschool drama he so clearly had become.

"Can you just...Hold it in your hand as you walk in? Look right there buddy. There's a kid with a water bottle in his hand! Just do that! And you can put it away in your classroom!" Stress seeps through the forced brightness in my words as his older brother tumbles in an appropriately quick manner out of the car.

"NO I CANNOT!" comes the answer again.

To my abundant surprise he listens. He makes it to the door.

But then Maggie, his nine year old his sister, who's in the middle row captain's chair and is on the autism spectrum, starts to giggle which is what she always does in stressful situations.

"DON'T YOU LAUGH AT ME MAGGIE!!!!" he shouts as the principal arrives the door of the car to welcome him to school (and probably see what the hold up is). 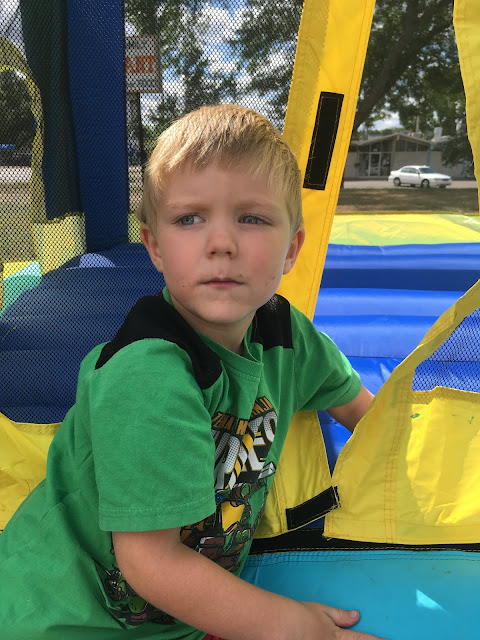 "Are you okay buddy? What's wrong?"

Oh no. Don't ask that. He's almost out. He's literally centimeters from exiting the car.  I scream internally, while outwardly managing a polite smile of thanks for her concern.

"My water bottle." He gulps the words out in one great rush. After almost pulling it together he starts to break down again, as he remembers why he was upset, and not just his anger  because his nine year old sister is annoying him.

"Oh? Do you need your water bottle?"

The silent screaming in my head doesn't drown out his adamant claim that he does need it. He slowly stumbled back to the back seat and picks it up (as only a kid with low tone who's been waiting for an opening after a PT referral can do), then slowly stumbles to the front as I sink down a few inches lower in the driver's seat and try to disappear.

Finally he makes his way past his sister. 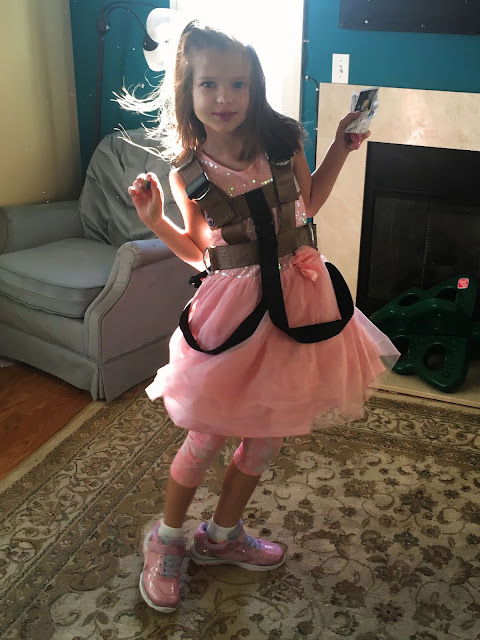 "Maggie's sock fell out!" Patrick tells me, because of course, by now her socks are off her feet and on the floor in front of her, and directly in front of the door that James is stumbling out of.

"Throw it back in." I reply. "And have a great day." The car doors finally close and as they head towards the school's front doors I glance over my shoulders to see that "no one behind us" has been transformed into Cars Lined Up All The Way to The School's Driveway Entrance. And possibly down the street, but at least I can't see that far because of the corner.

I die a little.

We pull out of the parking lot and I fantasize for a few minutes about the abundantly clear instructions the four and a half year old is going to have tomorrow about unloading at drop off, and then spend another ten minutes wondering if I've just single handedly gotten kindergarteners and K-club banned from using the drop off lane (they're already banned from being picked up there).

Because if that's the case, we're in real trouble.

I have to drop the boys off by myself each morning, on my way to dropping off our two autistic girls at their two individual schools, which are roughly fifteen and thirty miles away, respectively.

We don't do buses, because with medication rules, they can't have their inhalers on the bus for the hour and a half bus ride, and two of our kids have inhalers and I feel like that's just too big of a risk. 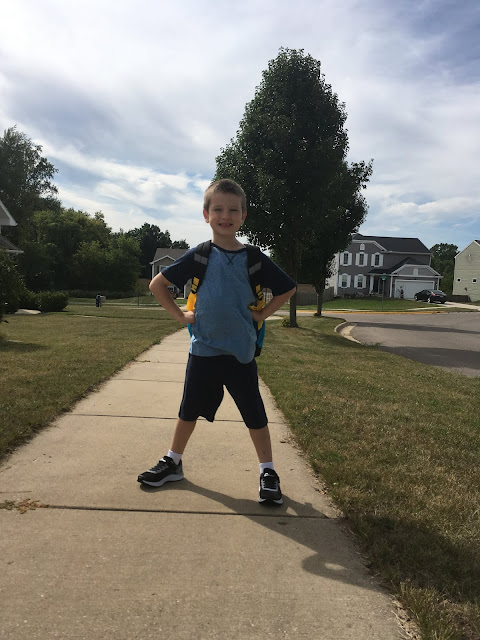 And walking them in? I imagine it's physically possible, in an abstract sort of way.

I would have our nine year old, who loves to elope and is a genius at escaping (and may just be melting down, because mornings are prime melt down time) and our three year old, who collapses randomly, and who I also have to hold onto every moment to keep from running off, trying to fall into every puddle she sees, and then freaking out because she's wet and HATES how that feels navigating the path to the school.

Loading and unloading them into the car by myself is the stuff that nightmares are made of. Can I do it? Yes.

Do I avoid it at all costs? Also yes.

So I risk an occasional slow morning on those days when my four and a half year old is having a moment to keep everyone a little bit (okay a lot) safer and to keep myself a little bit saner.

And I hope that the cars behind me understand when they see my red eyed four year old tumble out of the car, that the reason behind the unreasonably long unloading time was because of a rebel water bottle, and not because I was scrambling an egg for my kid in the car and serving him breakfast. 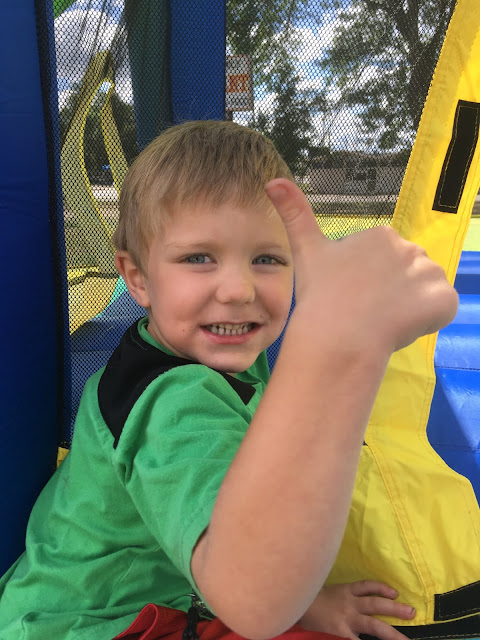