I didn't realize until a friend emailed me last night that I'd completely forgotten to update everyone on Maggie's big day getting an MRI!  First off, thank you to everyone who prayed for us! 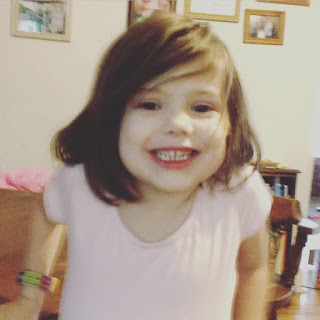 The day started bright and early when we headed to the hospital an hour before the sun was up and met with one of her therapists after checking in downstairs.  We made our way together up to the Children's Outpatient Surgery section of the hospital and there were some tears during the weigh in and taking of her measurements and attempted taking of her vitals. Maggie's fear of weighting rooms and check ins at doctors offices' is almost a phobia.... and so those times are never fun.

Then we were sent down to a bed, which she was supposed to stay in... however... there was one major obstacle.  This particular entire section of the hospital had been decorated to look like a fish tank, complete with sea life scenes across the nurses' station and linoleum tiled ponds, full of fish, on the floor.

It was the linoleum tile ponds that gave us the most trouble.

It may be hard to imagine how big of a deal this was, but basically a giant room decorated like a fish tank is like Disney World to Maggie.  All she wanted to do was go four feet from her bed, crouch down quietly at the edge of the linoleum pond, which was far away from everything and everyone else and sit her little mermaid doll, and teeny tiny plastic sand castle, in the middle of it and let them swim.

When the nurse explained that she needed to be in her little fabric lined cubicle so that she didn't violate any other patients privacy, she seemed to feel that I'd taken her to Disney World and told her she couldn't touch anything or go on any of the rides and needed to sit in a hospital bed instead.

So she was pretty sad as we corralled our whirlwind into her little space and pointed out that the floor was blue there too.  We sang songs, and tried to interest her in what was on TV and waited.

And Maggie calmed down and sat on the bed and on my lap and played inside our little space, if not happily at least quietly.  Since we were still in the hospital it was a victory. 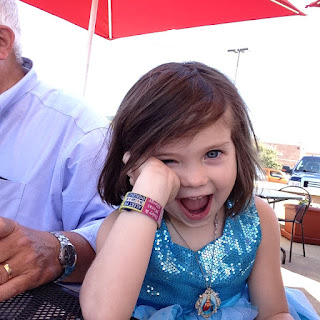 The nurse came in and it was clear that she was having a bit of a bad day.  She looked at Maggie and sighed and said "I don't know how we're going to do this with her. I don't think we'll be able to.  We're never going to be able to get an IV in her.  There's no way." And she walked off, and came back and said the same thing a second time, and left again, and returned to say it a third time, in case we hadn't heard her the previous two times, and added that she was sending the anesthesiologist in the have A Talk with me about what was going to have to happen.

It was around this time that Maggie rolled off the bed and curled up in my lap and started to sob, and I may have had a hard time suppressing the swear words in my head, which included the repeated phrase "Really, is this this unusual at this enormous teaching hospital?  Just do your job."

You see we've been to the hospital before and had blood draws before and it wasn't a big deal. I've been repeatedly told that if she had a hard time they'd just call someone from the PICU to come help, but they've never had to.  Of course, we'd also never had a nurse announce in front of her how impossible and difficult it was going to be, so that did add a degree of difficulty. 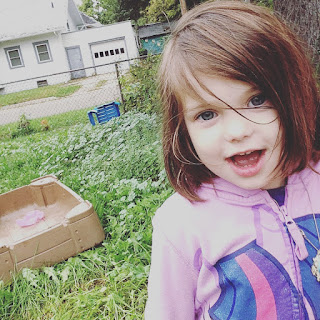 In retrospect I should have said "You know she understands EVERYTHING you're saying" but I was so stunned at the way she was saying what she was saying that I couldn't really find a response. I kept telling myself she as having a bad day, but her bad day was seriously affecting my now terrified five year old.

Then the anesthesiologist arrived and saved the day.   He swept and in and explained that he works in critical care pediatrics and Maggie glanced over at him as he began to talk to her.  She sat up.  He asked if he could listen to her heartbeat and said "can we listen to your heartbeat here?" and put the stethoscope on her knee.  She reached out and took the end of the stethoscope and put it over her heart.  Then they listened to her doll's heart.

Within a few minutes he'd completely won her over and was helping her hold the ear pieces for the stethoscope up to her tiny Molly dolls ears so Molly could listen to Maggie's heart too.

As he left the room he said "I'll have to tell Nurse R that she likes me the best." with a smile, after commenting several times on how charming she was (and by now she was all smiles and giggles).

We decided that Versed Syrup, which Maggie takes when she has teeth cleanings, would be the best way to go about getting the IV started, because he wanted to make the whole process as easy for her as possible.  He ordered a special flavored mixture from the pharmacy, since all the syrup they had was unflavored (and apparently very strong tasting) and when it came Maggie easily drank it and sat on my lap as she became more and more sleepy.

I lifted her up in the bed and held her hand while they placed the IV and then wrapped it and then found a splint for it, since even in her drowsy state she was still very interested in what was taped to her arm. 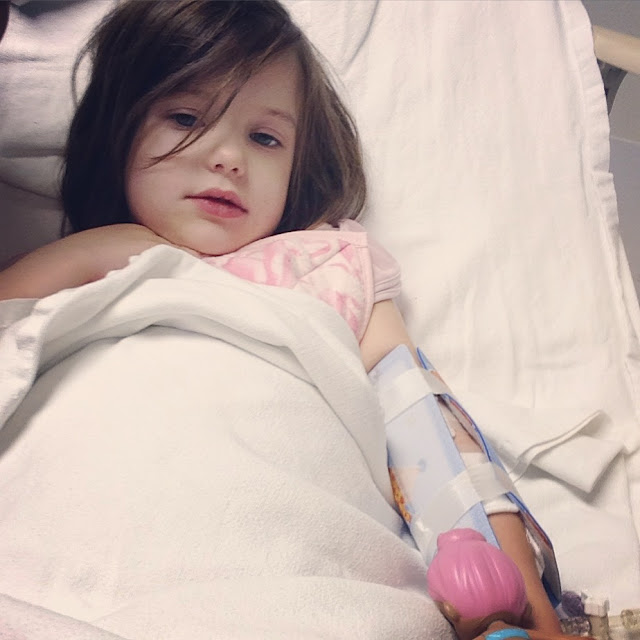 We walked down the radiology and I got to be by her head while she fell asleep and then she was whisked into the MRI while I said goodbye to her therapist and thanked her for talking over three hours out of her morning to be there, and then I went to wait in the waiting room.

Maggie woke up when we were back upstairs, and she was excited to see that they'd brought her a red popsicle.  Her nurse was in a much better mood.

After gobbling down the popsicles we were whisked out to the car in a wheel chair (since she wouldn't sit in it by herself) and a few minutes later I was trying to convince her that she really couldn't walk, much less run (the Versed Syrup takes a bit to wear off), as she attempted to climb out of my arms and zoom around the house. 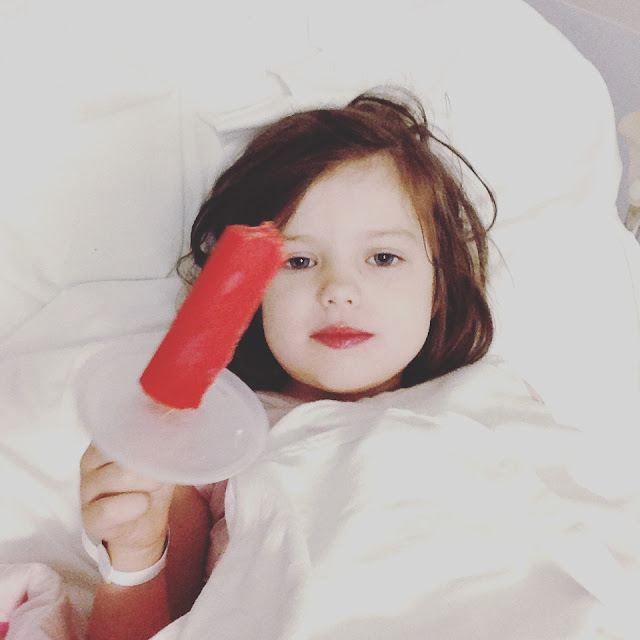 It was a huge relief when the meds finally wore off and I didn't have to worry about her not being able to walk any longer.

All in all, apart from that one little bump of grumpiness in the road, it went better than we really could have hoped. And now we wait for the end of the month for her next neurology appointment, although I have a feeling we won't have any bad news since they haven't called us and the results must already be in!

Thank you again for all the prayers for her big trip to get an MRI.  We definitely appreciated them!
Posted by Cammie Diane at 7:41 AM