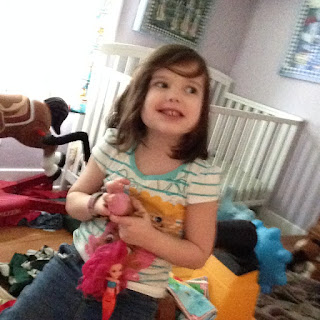 Maggie has been going through a phase where she's all about labeling things.  "Giraffe, elephant, panda, lion, monkey" she says, pointing to each animal on a certain pop up toy that she loves.  "Animal boat!" she tells me as she sneaks by me with it and flings it into the bathtub.

"Purple, blue, blue green, green yellow, orange, red, pink!" she sings, pointing to each color on the xylophone and pausing until I repeat each word that she's said back to her.

For a while she was trying to convince me that the letter B was actually a P.

She's known her letters for at least a year now.  Her list of sight words that she can read is impressive.  But I wasn't totally surprised by the insistence.

Now and then she'll insist on something like one letter being a different letter, or on a strawberry being called ice cream, often with a small smile playing at the corner of her lips.

Can I trick mom?  Does she know that this is actually a B?

Yesterday while all the kids were playing in the boys' room, she brought me a small block and pointed to it. 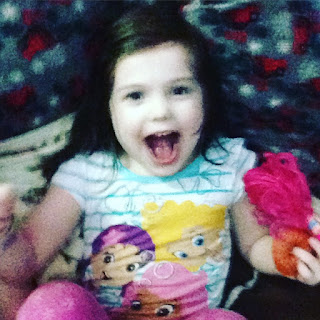 I glanced over, half expecting to see a B.  Instead it was actually the letter P.  Maybe I've finally convinced her that I know my letters.

"P is for Patch," I responded.

As I got her bed ready for her to sleep in it last night, carefully hanging a blue sheet from the top bunk so that she can pretend she's under water, she used her words to make one last request.  "Under sea?"  she said as she got ready to get in bed.  "Under sea?'

It was a request for her favorite bedtime song, the only song from the Little Mermaid she ever wants to hear and I obliged with my off key rendition before telling her goodnight.

It was a day of words and I can't wait to see what she comes up with next.
Posted by Cammie Diane at 7:30 AM