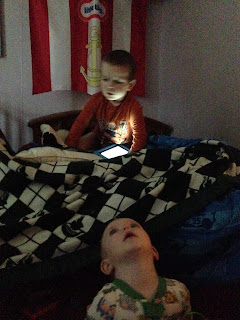 "Mommy?"  Patch's voice was just above a whisper in the darkness of the boys' bedroom tonight.  James was already asleep but Patch, our former champion sleeper, has had a hard time falling asleep alone lately, and so I was sitting with him as he drifted off.  "I miss Jamesy!"

His voice was so tiny and sad that I reassured him that James was asleep in his crib, and that his crib is only two feet away from Patch's toddler bed, and that they'd be awake and playing before he knew it.

Patch and James are inseparable and if James is following Maggie into trouble of some sort (usually of a climbing sort) Patch is nearly always right there to shout "Uh oh!  Mommy!  Baby brother! Uh oh!" until I glance over and rescue James from whatever it is that he's trying to do.

Our house is quite thoroughly baby proofed, but with a big sister like Maggie leading the way, he still finds ways to surprise me by getting into trouble.

It seems that Patch's watchfulness of Maggie, which persists to this day, has carried over into telling me whenever he thinks his little brother needs extra attention too.

Maggie's elopement this summer definitely made an impression on Patch (for those who don't know, he was a little over 2 1/2 at the time).

If Maggie isn't in the room with us, because she's gone upstairs, or because she's at therapy and he didn't notice when she left, he'll look around and say "Where'd Maggie go?  Where's Maggie?  Maggie upstairs?"

His concern is especially touching since if there are two kids who are going to be getting into an argument about something it's going to be Maggie and Patch.  They've hit a lot of developmental milestones together and their closeness sometimes expresses itself in arguments. 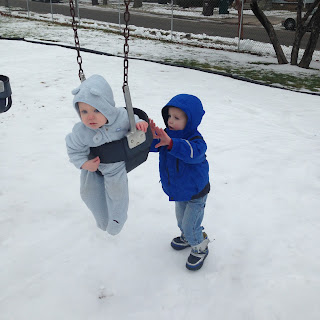 Even when she isn't with us he's still alert.  Once I assure him of where she is he instantly relaxes, but at least once a day he checks in if he isn't sure where she's gone to.

This week we went to a playgroup/women's group at our parish.  Maggie was at therapy and so I took the other three with me.

A few times people left and the left the doors to the outer hallway open.  I didn't really notice, because I wasn't watching for open doors the way  I would if Maggie was with us. But Patch was.

Twice I saw him run across the room towards the doors and I got up to follow him, afraid he was following in his older sister's footsteps of running off at the first opportunity.  Instead it became clear that he wanted to make sure the doors were closed.  The first time a few older kids had walked out and he quickly went to the door and closed it and then looked at me proudly.

The second time though there were people standing outside the door talking and he stood in the doorway and then gave me a worried look as he waited until everyone either came in or left altogether, before carefully closing the door. 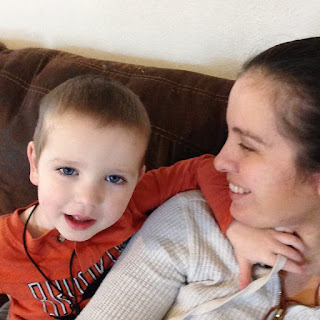 It can be tough being three.

The little guy has a serious case of the nos and it's often exasperated by having an older sister who's only too willing to argue and say "yes" over and over again to answer each of his "nos."

So I was surprised tonight when he was laying in bed and he hugged the stuffed animal that I picked up that has a little button that plays the new baby's heartbeat from the last ultrasound.

"Patch, you know the new baby's going to be a girl."  And then I told him what we're going to name her.  And he said "Why?" And I told him because we really like that name.  He was quiet for a moment and I said "What do you think Patch?  Are you going to be a good big brother to a little sister?"

He was silent for a bit longer.  I half expected a no, since that's his favorite word these days.  Instead in a clear little voice he said "Yes!" and went back to cuddling his favorite stuffed pound puppy as he drifted off to sleep.
Posted by Cammie Diane at 9:03 PM