Maggie and the Crucifix

"Father in heaven, I give you today, all that I think and do and say.  And I unite it with all that was done, by Jesus Christ, your dearest Son."

It's 6:30 am and the kids and I are sitting down at the dining room table, about to have breakfast. At the name of Jesus I see Maggie's head whip around.  She jumps up out of her chair and races over to the mantle, and then runs over to her little desk to get her chair.  Dragging it across the room she makes impressive time, as I realize that she really is doing what I think she's doing and I jump up from where I'm sitting at the dining room table to try to get to the mantle before she does.

I make it just in time, grabbing the crucifix before she knocks anything over in her quest to take it down from it's place on the center of the mantle.  I put it in her hand, reminding her to be gentle and she kisses Jesus' face and dances around the room, her eyes fixed intently on his face. 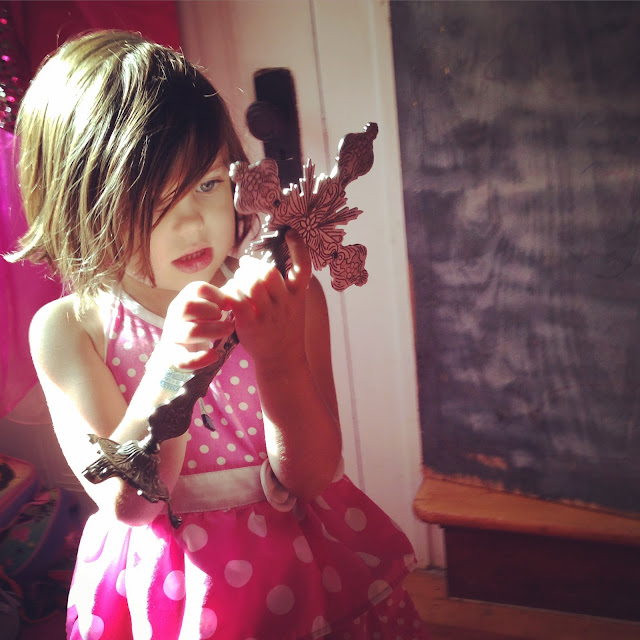 Patch jumps down and chases her, trying to grab her arm, but she's fast.  "Kiss!"  He shouts!  "Kisses!  Cross!  Kisses!"  He's about to start crying as he tries to wrestle the crucifix from her grasp.

"You guys.  Stop.  Stop.  We don't fight over who gets to hold the cross.  Patch you can have your turn after Maggie."

Maggie gives the crucifix a goodbye kiss and hands it over to me and Patch zooms over to grab it, while announcing "Kiss" to the whole world as he kisses the top of the cross triumphantly.  He zooms around the room triumphantly until I rescue the cross again and hand it over to Sadie, able to relax now that it's out of the grasp of our two whirlwinds.

The crucifix, which we brought home from Israel when I was pregnant with Sadie, was purchased in Bethany, where a man picked me up and put me on top of a camel, and then charged Paul $5 to get me down. 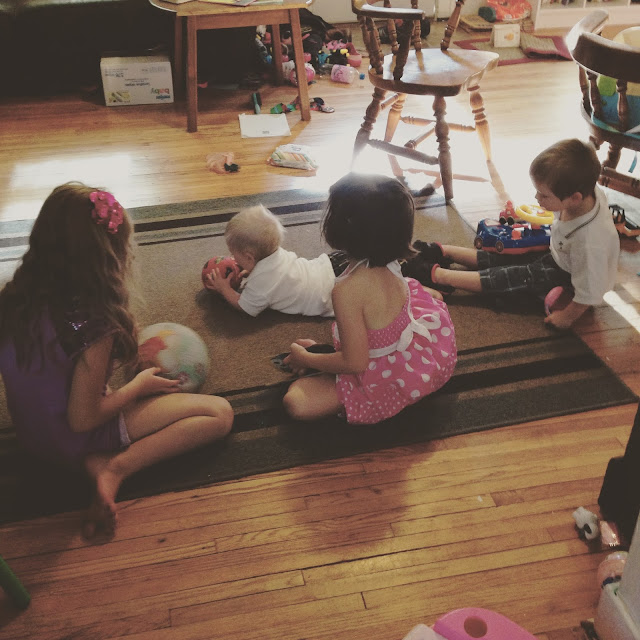 At night time prayers, after another round of Everyone-Wants-to-Hold-the-Crucifix I ask Paul to put it in the kitchen to help them settle down.  I point up to the crucifix on the wall and say "there's on up there. You can look up at it anytime you want."

"I don't think so."  I say, shaking my head as I look at our almost hundred year old home's high ceilings.  "That things like ten feet off the ground.  There's no way she can reach it?"

I give her a crucifix and she walks around the house wearing it, glancing down now and then to make sure it's still there.

Paul shakes his head, still certain that I shouldn't have pointed it out, and a few moments later I turn around to see Maggie.  She's stacked a chair on top of the giant mahogany chest that belonged to my grandmother and is standing on it.  With one little arm she reaches the top of the window sill, just barely, and she uses that to grab the bottom of the crucifix.

Paul swoops over and rescues her and the crucifix.  This one is solid metal with no stand.  It is virtually indestructible.  He helps her to look at it and after more kisses she dances around the room holding the crucifix like she would one of her mermaid dolls so that it's "swimming" through the living room.

Finally everyone settles in to read a couple chapters of the children's Bible that we read at night before the family rosary.

I can't help but think that Sadie's enthusiasm is contagious.  Although after several days of repeating this same episode I have to say that there's something unexpected about breaking up fights over who gets to hold the crucifix first.  Maybe I just need to invest in a few child sized, incredibly durable crucifixes so that they can each have their own.
Posted by Cammie Diane at 11:06 AM