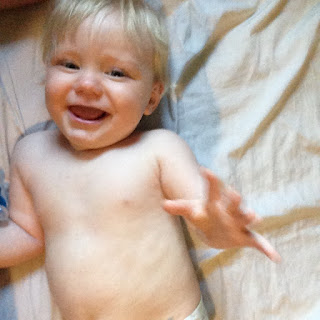 I wasn't going to write anything for Breastfeeding Awareness week.

I've been nursing or pregnant (and often nursing and pregnant) for the past eight years this September.

The current baby has been nursing for almost ten months now, which makes for a collective 68 months of nursing since the past seven years.  So it's not that I don't have anything to say about nursing, but there are so many good posts out there that I sort of felt like it had all been said and I had nothing to add to it.

Besides, I've never really encountered a negative reaction to nursing one of our babies, and so I think in a way I'd grown complacent.  Sure there are weirdos out there but is it really that widespread that it needs and a week of awareness?  I wasn't sure.

In fact, as I type this I'm not entirely sure I'll post it.  It's weird and kind of creepy (okay, when I was there it felt really, really creepy) and I spent yesterday afternoon looking for excuses for the man we encountered yesterday in the parking lot at the zoo and spent the other half wishing I'd continued to feed James because I'm pretty sure that he was about to give me the opportunity to call 911 and press charges against him as a sex offender.

Part of me feels like I was just bullied for feeding my kid in our car and I kind of hate that.  But anyways, here's the story.

Yesterday was a hard day in a series of hard days.  On Tuesday I got Maggie all ready to go to therapy by promising her as she was getting ready that she was going to go to the center to see her friends and her favorite therapist.  All morning she did everything I asked, enthusiastically, because she was so excited. 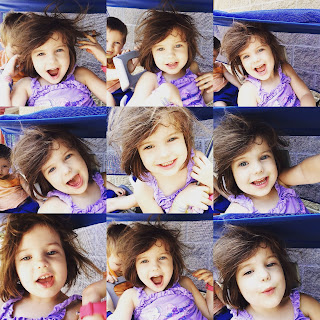 I loaded all the kids in the triple stroller and walked a mile to the center.  On the way we stopped at the polls to vote, and she cried the moment the stroller diverted an inch from the center of the sidewalk to go into the polling center, but I promised her she would get to go to school to see her friends and it made it a tiny bit better while I hurriedly checked off boxes to make my selections.

Then we got to the center where the scheduling person looked horrified when she saw us and asked if her therapist hadn't gotten a hold of us yesterday, to tell her session was cancelled.  No, no she had not.

So I took them to the park, but the park was not a substitute in any way, shape or form for a therapy session (because they are seriously the highlight of her day) and so there were tears.  And the day was hard.

Yesterday wasn't much better because therapy was cancelled for Wednesday and Thursday too, which as you may imagine, was warmly received.

Then, shortly after lunch, Maggie screamed and came running over to me and Sadie yelled that there was a bug on the inside of the window and I was finally able to figure out that a bumble bee had stung her on her thumb, leaving her completely inconsolable.

I quickly texted Paul, asking him if he could pick us up at the park, as the walls in our little home were rapidly closing in and we desperately needed to get out.

And we started walking.  I knew right away that it was already too hot and humid for a long walk, but I was determined not to go back.  We walked for over an hour before we got there and then the otters were hiding under a tree and the tigers were inside and the highlight of the entire day was a raven named Rocky who is hilariously funny and brilliant and really deserves his own post.

Still we walked around the zoo for two hours, waiting for Paul to get off work, and spent a long time in front of the spider monkeys swinging across the top of their enclosure and discovered that the snack bar had little popsicles that didn't have dairy or gluten that all four kids could eat without an allergic reaction, and it was kind of wonderful. 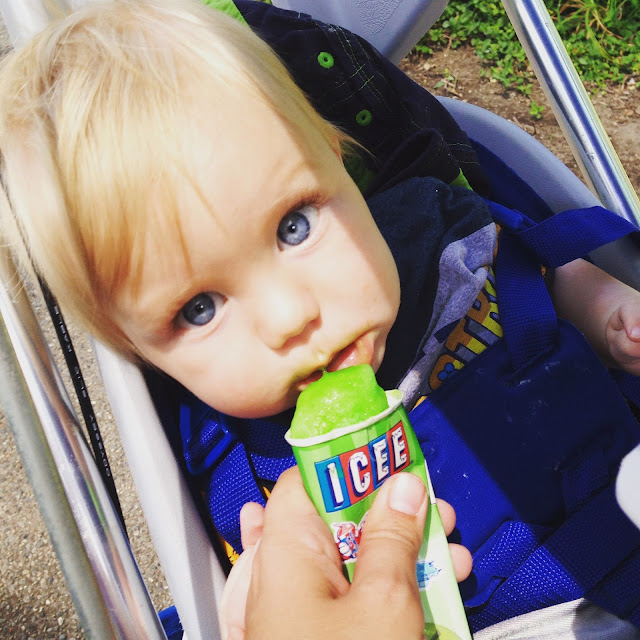 Then Paul got there, after stopping at home to get the stroller carrier and tie down straps, and we took the kids and used the tickets I had for a pony ride and all three of the big kids had a blast, but I'll admit that I was absolutely beaming when I saw Maggie riding along the little loop with a huge grin on her face: 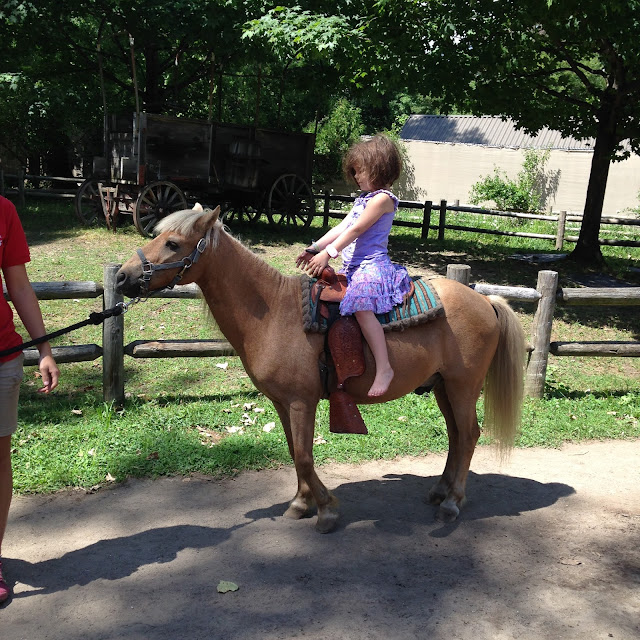 After that we rushed the kids out to the car and loaded them in.  I took James, who was letting me know he was starving, up to the front seat, and sat down to feed him.  We were all hot and sweaty and tired.  Paul had had to be at work by 6 and we were all beginning to feel the length of the day.

I glanced around.  I'd been in a rush when we left the house.  I'd remembered epi pens and inhalers that I'd thrown in my small backpack but I hadn't planned on nursing since he'd just eaten before we left and hadn't brought a nursing cover.

I had on layers, but he was starving and we were in a parking lot with no one around, so rather than fumble with my shirt while holding him I glanced around, saw no one was near and pulled by stretchy necked shirt to one side so that I could feed him.  It wasn't like anyone walking down the aisle would be able to see into the front of our van anyways.

The baby wasn't cooperating.  At almost ten months he would go from being ravenously hungry to entirely distracted by everything else that was happening in the car.  He flopped backwards and to the side and then nursed again.  I was thankful that I'd waited to feed him until we were in the car where  I didn't have to worry about all the latching and unlatching that was going on.

After a few moments I had an odd feeling, of being watched, and I looked up from his antics.  I looked from side to side, and no one was around.

And then I looked straight ahead, across a short grassy area into the next row of cars, and saw a tall grey haired man facing us, holding his shirt up so that his ample stomach was exposed.  His wife was there next to him.

When he saw me look up he began to undo his belt and seemed to be unbuttoning his pants.  I quickly pulled up my shirt and shifted the baby as I reached for my phone.  It was incredibly apparent that he as about to flash, or at least wanted to give the appearance that he was going to flash, our car full of kids.  If he was going to do what he seemed to be doing I was going to be calling the police.  He rebuttoned his pants and rebuckled his belt.  With a slow elaborate motion he lowered his shirt and smoothed it and turned away.

His wife punched her fist in the air a few times and they turned and walked away, talking with another couple who had walked up and laughing, as they headed to the park.

I sat and tried to make sense of what had just happened.

For a few moments I tried to come up with other possibilities for what had just happened. Had he just been adjusting his belt?  I wanted there to be another reason.  But it didn't make sense within the large framework of what had happened.

Dementia?  Dementia is really the only other possibility I could come up with, but I couldn't help but feel that the actions were incredibly intentional (and I doubt his wife would celebrate the action if it were dementia, although her celebrating it at all seems very, very strange).  He seemed to be equating breastfeeding a hungry baby with unbuttoning his pants and exposing himself.

Which is pretty disgusting.

I started this post by saying that I wasn't planning on writing anything for Breastfeeding Awareness Week.  And I'm still not sure that I have.  This post offers nothing constructive, except perhaps my admission that I get it now.  I understand why breastfeeding should have an awareness week.

It shouldn't be a week to make people who've made other choices feel badly about their choices.  Whenever I've written about breastfeeding in the past I've gotten comments explaining why friends and loved ones had made other choices, and those comments often made me feel as if a wound was reopened, which was never what I intended in my writing.

But while it sometimes feels like everyone in the world is encouraging new moms to breastfeed, there are also a large number of people out there that think it's pretty gross.

So thank you to all of you out there who do write and advocate, so that those who don't get it yet might realize that nursing is natural and not disgusting or dirty.

In the perfect world people would realize that nearly all moms feeding their babies are doing what is best in their individual situation and give each other the benefit of the doubt, whether a baby is being fed by a bottle or at the breast.  Obviously that world is still a ways off but I hope that little by little we're moving towards it, or at least moving away from equating any type of baby feeding with doing anything that involves unzipping your pants. 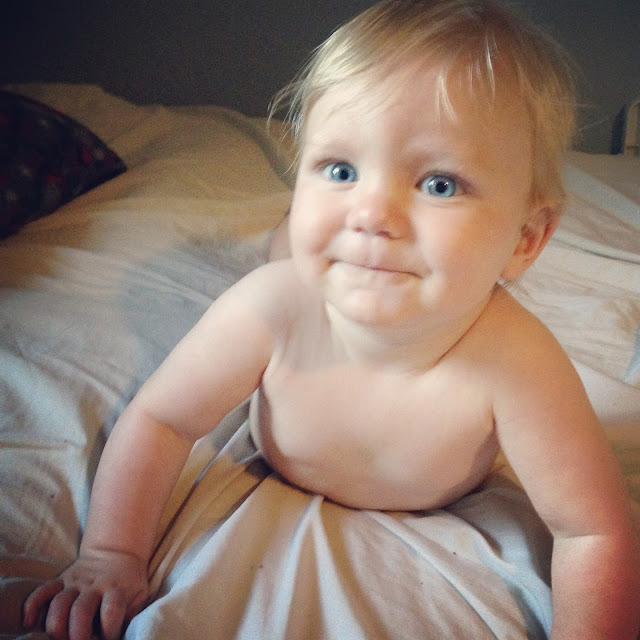 Email ThisBlogThis!Share to TwitterShare to FacebookShare to Pinterest
Labels: breastfeeding