He Has Been Listening 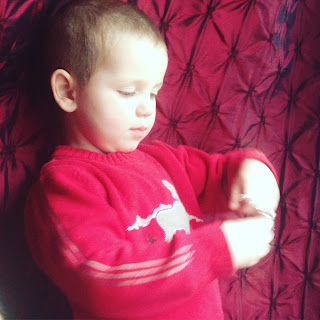 Patrick is suddenly full of words.

He's a fountain of non-stop commentary on anything that's going on around him and when I have to hush him, because we're at Mass or someplace else where he needs to be quiet, he'll whisper in a small voice "Okay Mommy.  Sorry Mommy." and manage complete silence for somewhere between fifteen and twenty seconds before he's off again, chattering about Mickey Mouse and Baby Brother and whatever it is that he thinks that Maggie shouldn't be doing.

For the last three years I've more or less figured that Patch's religious education was... non existent.  It isn't that I wouldn't try.  It's that he would never hold still.  He couldn't be bothered to look at the story Bible and little children's prayer books that Sadie adored at the same age.

He'll watch DVDs on the DVD player in the car about the lives of the saints (and yell "Again!" when they end) but the second I tried to read to him or even tell him a story or say a prayer he'd be on his way to the next thing, squirming and wiggling to get off my lap, or rapidly turning the pages of the book and running off if I insisted on staying on one page until I'd read the few short sentences that were printed on it.

Lately that's changed though.  When Sadie does her Faith and Life work on my computer he runs over and shoves himself into the seat between us and clasps his hands and says "Pray!  Pray!"  And he proceeds to sit and listen to her entire lesson, clamoring to help when there's a game, and making his awkward sign of the cross whenever a prayer starts.

Maybe he hasn't been missing everything he's heard.

My favorite time with him lately has been bedtime.  We say an Our Father and a Hail Mary and a Glory Be and the Guardian Angel prayer and then he tells God thankful for all the things he's thankful for.  It's fairly predictable and gets increasingly hilarious as he goes on (and try to imagine Patrick as being pronounced "Patch-ick" for the full affect).

If I don't have him make the sign of the cross then he'll start over at the beginning, although sometimes Patrick's nose makes an appearance five or six times in the midst of the other things he's thankful for as it's apparently pretty important to him. 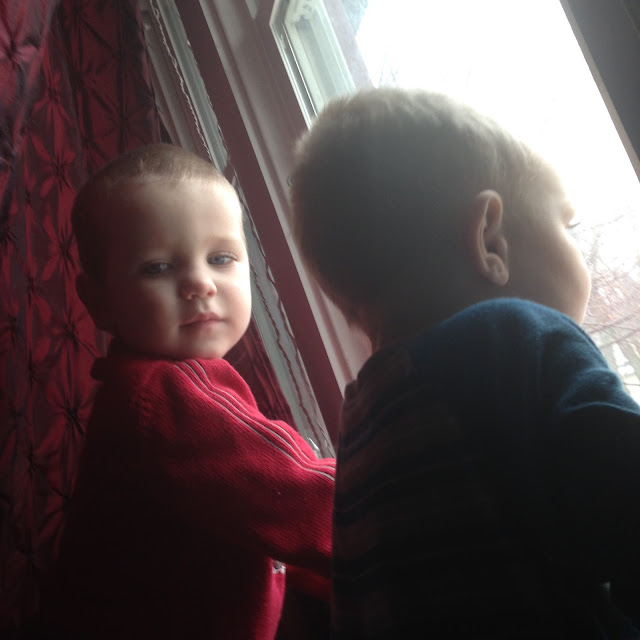 And each day I have more reasons to believe he hasn't been as oblivious to all those Bible stories and prayers as he's seemed.  He's even started insisting on wearing a little cross everywhere and I've caught him swiping chaplets out of my room (always two, one for him and one for James) a half dozen times this week.

It seems he really has been listening while he's been zooming around getting into everything.  Who'd have thought?
Posted by Cammie Diane at 9:30 AM

Email ThisBlogThis!Share to TwitterShare to FacebookShare to Pinterest
Labels: preschoolers