Mermaids, Migraines, and the Doctor she Likes 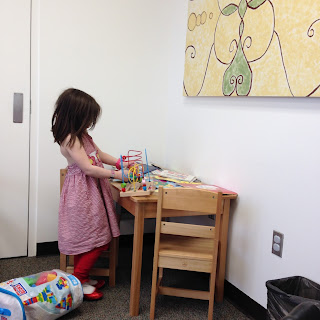 Yesterday I watched as one of the specialists that Maggie sees walked into the children's waiting room and said hello to us.  She jumped up, put down the book and toy she'd been playing with and raced out the door.

I was ready to chase after her, but she knew where she was going.  She skipped ahead of him to his office, and ran giggling over to the sink where an empty cup was waiting for her.  Her tiny mermaid doll was going for a swim.

In the moment, while I was relating to him the huge changes since she began her new migraine medication, I didn't fully appreciate how extraordinary that appointment was, from beginning to end.

Maggie hates doctor's appointments.  She can identify a new waiting room as a doctor's office's waiting room immediately and will become inconsolable.  Usually exam rooms are slightly better (waiting rooms are the worst), but the hours we've spent in these spaces are the longest in any day or month or year.

It doesn't matter if there's a huge fish tank or twenty different toys to play with.  She will not be convinced that these places have anything redeeming about them whatsoever.

So the fact that she stayed and played in the little waiting room until it was our turn and then led the way to the doctor's office, was nothing short of miraculous in my mind.

During the exam portion of the appointment she sat on my lap while he listened to her heart and she said "bu- bump, bu- bump, bu- bump" with a smile while the stethoscope was on her chest, and while she was wiggly during the rest of the exam, she wasn't upset in the least.

This is especially exceptional, however, because this was the doctor that I'd initially feared meeting. 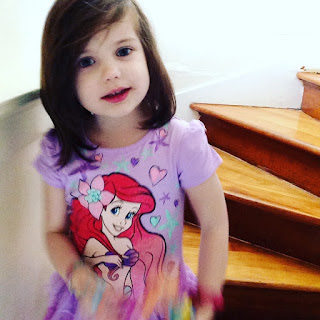 When we were first referred to him and I mentioned it in other appointments, a general silence would follow.  From therapists to social workers to other doctors, it seemed no one didn't know of his reputation.  But the time I met him I'd heard stories of terrified interns and terrified parents. And everyone wanted to warn me to be ready when we went in for the appointment about his bedside manner (or lack there of).

He was brilliant, everyone told me, but... not good with patients.  Or just people in general.

I was ready for anything at that first appointment.  And I was stunned when he was amazing with her and completely kind to me.

We've seen him more than a half dozen times now and he is one of two doctors that Maggie is enthusiastic about seeing.

She dances and prances and makes her mermaid doll swim around his office while he sits at his computer and types out the changes since our last appointment and they are without a doubt the least stressful doctor's appointments that we go to.

And I'm incredibly thankful that she's been lucky enough to see him.  Since getting her migraines under control she's so much happier and more playful.  I hadn't realized how much they were affecting her until she began this new medication and the instances of headaches went way, way down.

Less headaches have meant more words and more talking at home, and it's meant being happier to play with friends, and spending more time playing with her siblings instead of going upstairs and hiding under the covers because her head hurts!  Sounds don't seem to hurt her anymore.

I'm praying that the medicine continues to work and keep the headaches at bay!  I can't believe how much they'd affected life every single day before we figured out what was going on.
Posted by Cammie Diane at 10:21 AM