Maggie's GPS Part 2: A Review of the Verizon GizmoPal and the GizmoPal2

If you've read this blog for a while, you may remember the single most frightening moment of my entire life, when Maggie eloped last June and made it .6 miles, barefoot, in triple digit heat, after I noticed that she'd been playing a little too quietly in the kitchen for about five minutes.

In the month that followed I frantically researched different GPS options, ordered a GPS, sent it back because there was no way that she would keep the giant thing that arrived in the mail on (or that she would keep on any piece of clothing it was attached too).

That first GPS also only worked with T Mobile and AT&T satellites, which have zero coverage in the tiny town my parents live in, making the thing a large, useless piece of heavy plastic and metal for the time when we most desperately needed it.

So, after starting the search a second time, I settled on the Verizon Gizmo Pal.  Verizon is the only phone company that has cellular coverage where my parents live, so it seemed like a logical place to start and I was thrilled when we found out that they had recently launched a kid's GPS.

We got one for each of the girls, so that if I ever had to chase after Maggie, Sadie would be able to call her Dad and tell him what was going on.

When the little watch/phone/GPS arrived I tested them out and wrote about it here.  The GPS allowed me to track down Nani and Sadie and tell where they were going during the first test run.

It gave me a measure of peace after that horrible eloping incident. 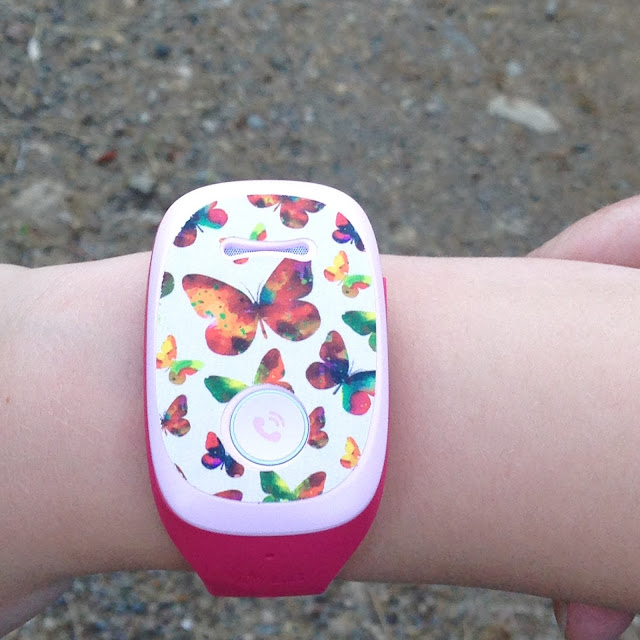 There were a few changes I would have made to the design of the original GPS.

It wasn't water proof, which is a big problem when you're child thinks she's a mermaid and is plunging her hands (and body) into water every chance that she can get.  And one our trip home from California she managed to yank the little button that held the clasp together out, and it was never found again.

We replaced the button with a flat screw used in horse bridles (thank you Grumpa), and then, when she figured that out (I found her one day with a screw driver she somehow managed to steal and the screw opened), I found that a zip tie through the two hole closures worked perfectly and that it was entirely Maggie proof.

I thought we'd have to replace the zip tie daily, to take the bracelet off for her bath, but found instead that she could squish her little hand and let me pull the GPS off at bath time and then she'd slide her little hand back in after with only a little difficulty.

This meant that she could likely get it on and off on her own, however by then it had become a part of what she had decided she wanted to wear, and if I tried to convince her to take it off to charge when she wasn't in the bath, hysterical tears would follow, so I was fairly confident that she'd keep it on.

And she has for the last few months.

However after a trip to Occupational Therapy that I believe involved playing with bubbles in the sink, the button that controls the GPS began to make a squishing sound, and the phone would randomly turn on and off, and call me all on its own, dozens of times a day.  The non-water-proof-ness of the phone had finally caught up with it.

I looked online and saw that the GizmoPal 1 was a thing of the past. There was a new model.

The GizmoPal 2 is water proof.  And it has a clasp like a regular watch, which seems sturdier than the button that Maggie pulled off (although securing it could be a problem if a child didn't want to keep it on, and it doesn't have the double holes in the wrist band that made it so easy to zip tie the previous model).

The only downside that I could see was that it was a bit bigger than the original model.  For reference I snapped this picture, which shows that it's slightly larger than the Fitbit Surge I got for my birthday last year.  However the size didn't seem to bother either of our girls: 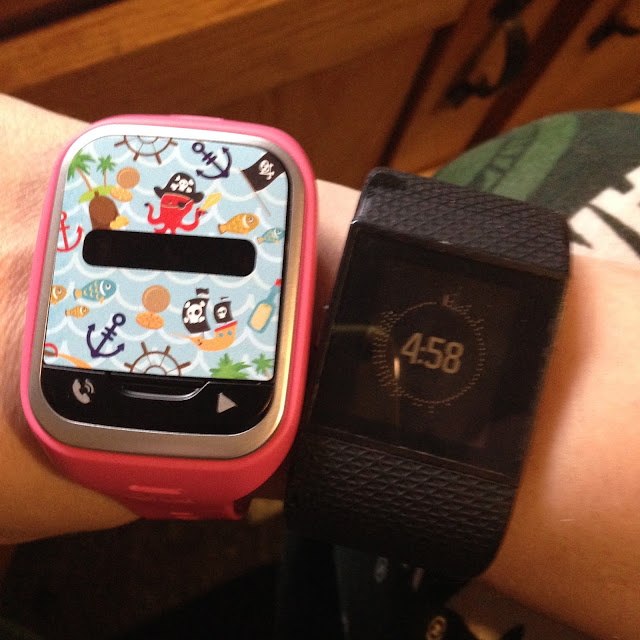 After letting Sadie pick out the sticker cover for hers, and carefully selecting the one that I thought Maggie would like the best, I presented her with her "mermaid bracelet."

She let me put it on. She carefully examined the clasp.  And then she kissed it six times. 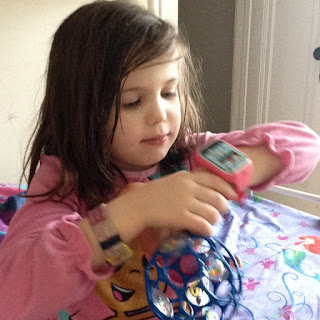 After that she tried to press on the black screen in the middle of her new phone to call me.  I showed her two times how to press the phone button so she would know how to call me.

In the half hour that followed she demonstrated that she'd understood by calling me a half dozen times from her bed and from the top of the stairs where she was lining up silk flowers she'd found in the craft closet.

The sound quality of the new phone also seems much clearer than the previous model and after testing out the GPS I found that it repeatedly found the girls' locations after 12-13 seconds.

The old phones generally took about 30 seconds.
The app does explain that location can take up to three minutes, although it's rare that it's taken over a minute when I've used it to check to make sure that everyone is where they're supposed to be.

This morning after I ran Maggie's bubble bath I told her that she could get in and she stopped and gave me a funny look and held out her wrist to let me take her watch off.  When she was done she happily put it back on, saying "mermaid watch" in her sweet little voice. 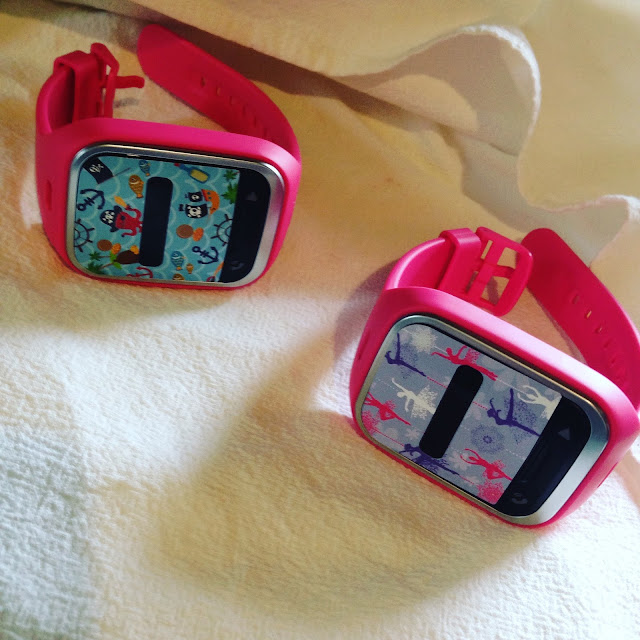 I only hope that this one lasts as long as the last one did.  Maggie is hard on her clothes, hard on her toys and yes, hard on her GPS watch and her Alert Me Band bracelet.  If we get 10 months out of it I'll be happy.

If it lasts for over a year, which I suspect it may since it's water proof, I'll be thrilled.

And in James and Patch news, the boys have claimed the old watches, which no longer make calls but still make silly little sounds, and have been playing with them for the last hour, entirely amused.

I wasn't compensated in any way for this post!  The watches were purchased.  It's just a product that has made me feel safer and so I wanted to share for any other parents out there considering the various GPS options for kids who wander.
Posted by Cammie Diane at 10:52 AM