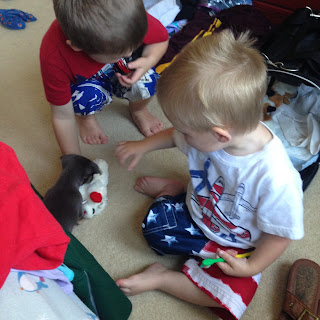 Me:  “Patch could you please get down from the table.  We don’t lay on top of tables.”


Despite his response he began to climb down off the table almost immediately.  At the same time James climbed down off my lap and hurdled across the room over to Patch.  James, was not quite nineteen months on this particular day and he has quite the temper.


The second Patch’s feet touched the ground, and before I could move an inch from where I was sitting, he reached up and slapped Patch on the top of the head.  Patch looked at James, totally bewildered and this conversation followed.


James: (bursts into tears and falls to the ground, because of course, he's at the stage where anyone simply saying the word "no" can cause waterworks)


At which point I actually had waddled over to where they were, scooped up James and explained again that we don't hit (hysterical tears always follow these explanations, no matter the tone) and cuddled Patch until all was forgotten and Patch was back to making his usual “Look at James, Mommy. He so cute!  Baby is so cute!” comments.


Sadie and I were trying to figure out where Patch’s sudden use of the word “evil” was coming from (he used it again when I asked him to do something) and finally figured out that it, along with saying “excuse me Mother” nearly every time he spoke to me (and calling me “mother” instead of “mommy) started the day after he watched 101 Dalmatians while we were driving around town doing errands in the van.
I suspect his new favorite word came from his new favorite puppy movie.