James had an MRI a week ago and I documented it in pictures sent to Paul via my phone while he had a lovely time at home wrangling everyone else to get them to where they were supposed to be, while I sent him frowning pictures of a very unhappy toddler.

Mostly unhappy, at least.  Although we started out strong:

Our six a.m. registration was a breeze: 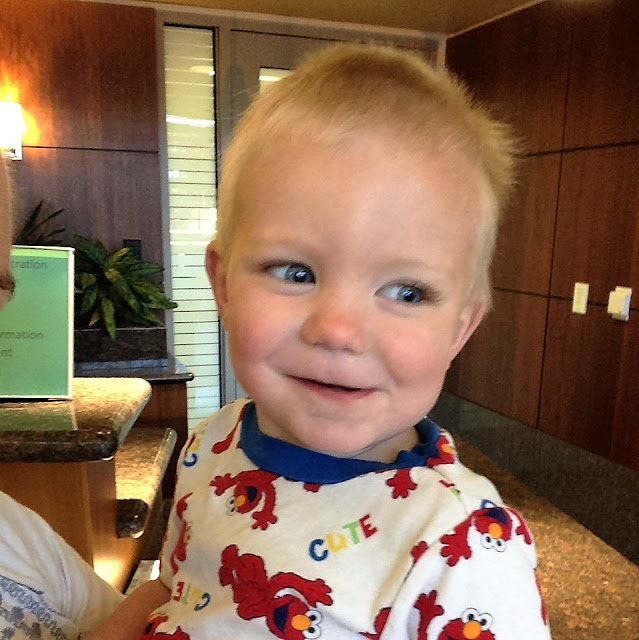 My stress level was much higher than it had been when Maggie had her MRI.  Maggie, being Maggie, just seems so much tougher and is so much bigger than James is.  And James, having had low tone and hyperflexibility for so much of his life, seems so much younger sometimes than he actually is (and obviously it's not like he's that old anyways!).

We didn't expect the MRI to be abnormal.  It was just to rule out any of the problems that would be visible in an MRI that would cause him to favor his left side over his right side, so strongly, at such a young age (although we've seen serious improvement with that lately.  It's not nearly as dramatic as it was six months ago).

But I'd asked the neurologist if he really, really thought it was necessary and he said that he did feel that at this point, after tracking James' progress for so long, that it was something that we needed to do.

And so we went in. 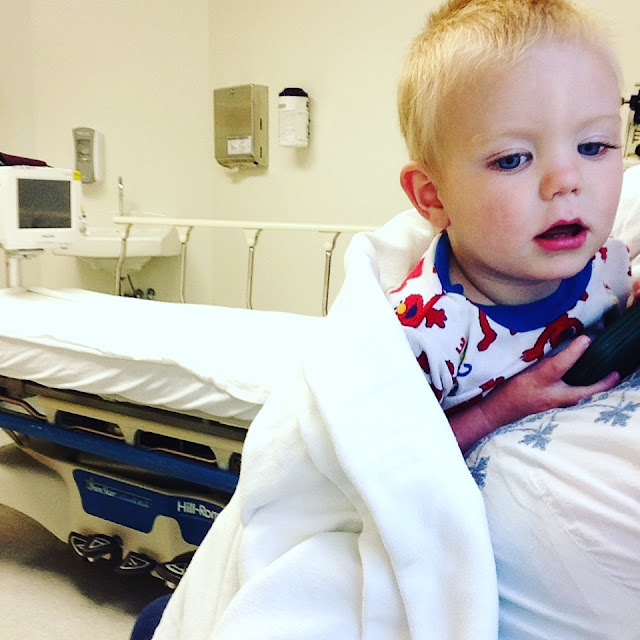 I realized early on as we met with the pediatric anesthesiologist, that James would not be charmed like Maggie had been.  It was the same anesthesiologist we'd had with Maggie, and he'd completely won her over when she'd been in a very, very bad mood.

James could not be convinced to smile.  At all.  He did try to eat the bubble wand that he was allowed to hold while he was getting his IV though: 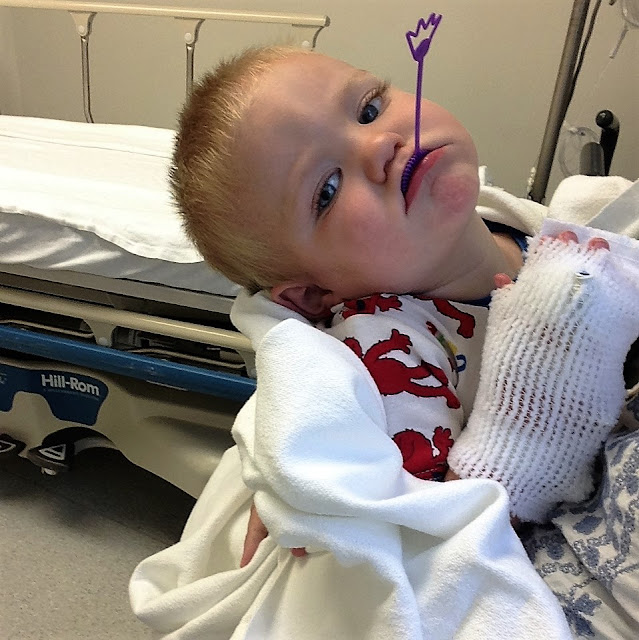 The time between getting the IV in and his sedation was a full hour.  That was the toughest part.  I managed to bribe him to mostly be still with an episode of Bubble Guppies.  But then he'd glance down at his left arm, where they'd gone through the vein during the first IV attempt, and he'd see the band aid, and then he'd look over at his right arm, which was entirely wrapped up, and he'd be furious again. 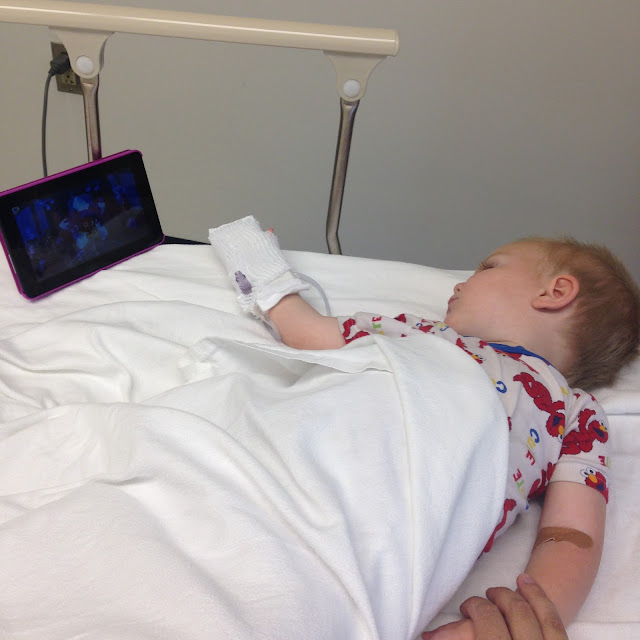 The MRI itself was utterly uneventful.

He did look incredibly tiny when they were hooking him up to oxygen and monitors and putting him in the machine.  That was the hardest part.

And then it was over and he was back out.  They had me crawl onto the bed with him, because I was having not-so-fun contractions, and people were getting pretty nervous about me having the baby right there in the MRI department, and so they suggested I lay down next to him and talk to him as he woke up. 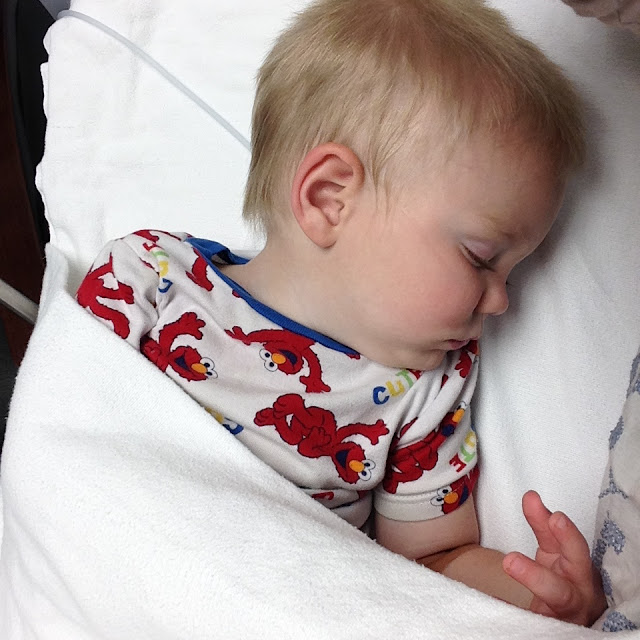 Except he didn't want to wake up.  The sedative should have been out of his system but he was determined to nap.  Only when I moved a little bit away from him once we were back upstairs, did he begin to stir.  And  he woke up and had some popsicle and some apple juice and all was right in the world again: 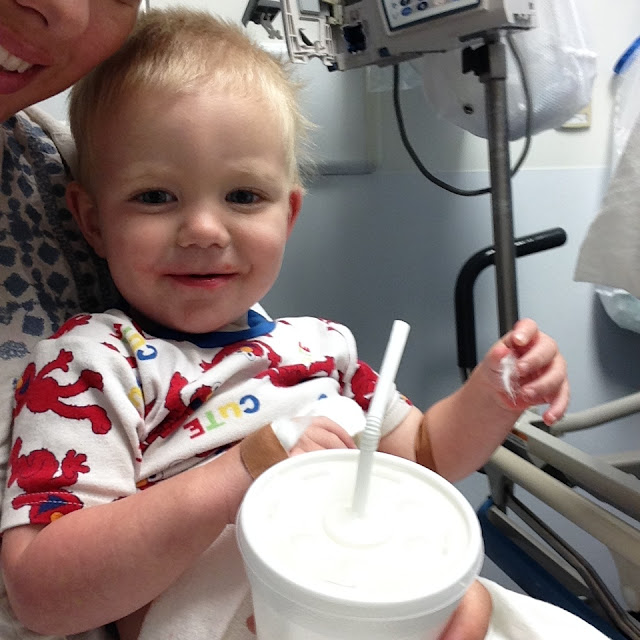 Today as we arrived at the house for more packing, my phone rang.

I picked it up and heard a woman identify herself as being from the neurologist's office.  Then she said "The results of James' MRI are back and everything looks good, except that we could see fluid in his..."

And then, because we were still in the car, Patch started talking loudly behind me and I could barely make out a word she said.  I finally was able to hear "sinuses" and got everyone to stay quiet long enough to learn that his sinuses were what was filled with fluid (thankfully not anything scarier) and that I needed to call his pediatrician's office to see what they want to do about that (it explains why he's slept horribly for the last week).

But the important thing is that the MRI looks good! 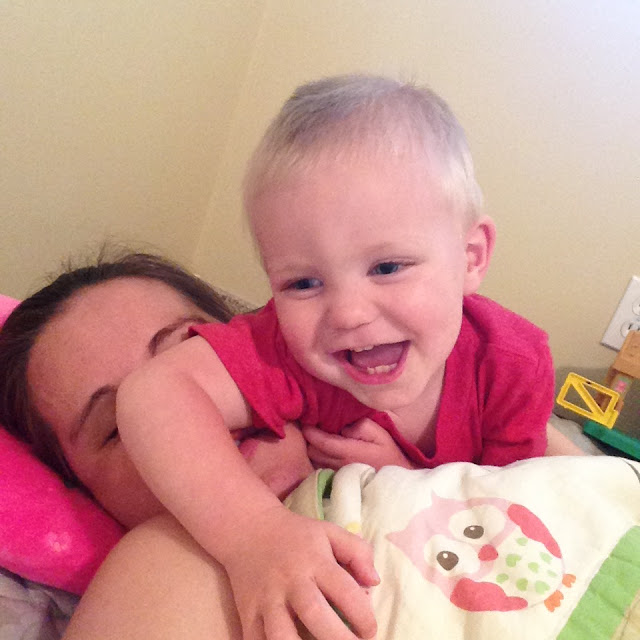 Now we need to wait three months for him to get in to see the same geneticist that Maggie sees.  Everyone from his pediatrician to his neurologist seem to think that's likely where we'll get actual answers if anything is going on beyond some little quirk causing developmental delays.

I was thrilled to learn, when that particular office called, that the wait list was only four months.  Last time it was seven months... so far is a huge improvement.

In other random James' news, his orthotics should be here any time.

But after writing all this I do think I should say that overall he's really been steadily improving in every area, from gross motor, to fine motor, to his social skills.  He's still not all that interested in words most of the time, but he busts out a few now and then and sometimes I think we just have late talkers (like Patch, who talks just about non-stop now).

The description I give at our different appointments for his progress is that he's steadily learning and growing and moving forward.  It's just that when I fill out the Ages and Stages Questionnaire (basically a questionnaire about milestones in different categories) for each of his checkups I'll start out totally confident that he's really, really caught up, and then I'll start answering questions and he'll still only be able to do between one and three of the six to nine things he's supposed to be able to do for his age.

And so I'll tell the doctor that we really haven't quite got all the eighteen months milestones down (as she can see) but he can totally blow the twelve month milestones out of the water now. And those six month ones that he couldn't do at seven months that set off the first little alarms of worry?  Totally mastered.  So he's getting there.  Just a little bit slower than we expected.

And now, since it's late again, here's one last picture of one of my favorite frowns.  He still hasn't given up frowning at my camera and then laughing when he sees pictures of himself on it: 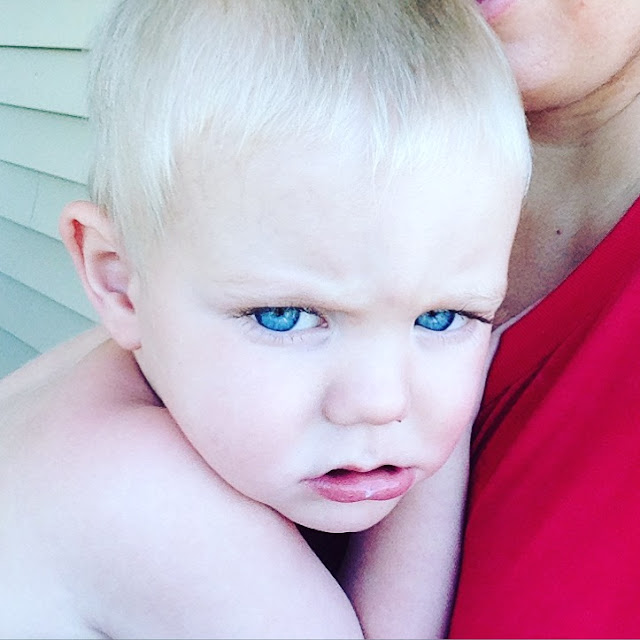