Tessie Alert: An Update of Sorts

Every time I think about writing a Tessie update, Maggie's sweet voice singing "Tessie alert!" from just behind me in the backseat of the car goes through my mind.

It's from the driving app that I use, and it asked me at some point if I wanted to add a baby reminder when I arrived at each location.  At the time I thought "why not?" and when it asked what I wanted it to say I quickly typed in "Tessie alert!"

So now, when the app and alerts are turned on and I arrive at wherever I'm going, it says "Tessie alert!" which Maggie decided to turn into a script.

She says it now and then when we've stopped the car, but also while we're eating dinner, or when she's walking by Tessie in the living room.

It probably doesn't quite fit the rest of the post, but it seemed as good a place as any to start before launching into the knowns and unknowns of which there are more of the later than the former. 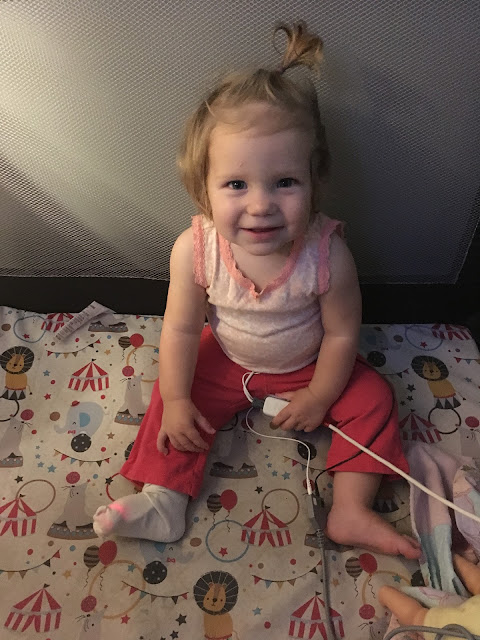 Tessie is growing and learning.  A week from tomorrow she'll be fifteen months old.  She is a great walker, and actually ran across the room today to dart onto the front porch when her therapist was leaving so that she could play in the sandbox.

99% of the time she looks and seems and as far as I can tell is perfectly healthy.

There's just the tiny sliver of a percentage of the time when what's going on with her still scares me. 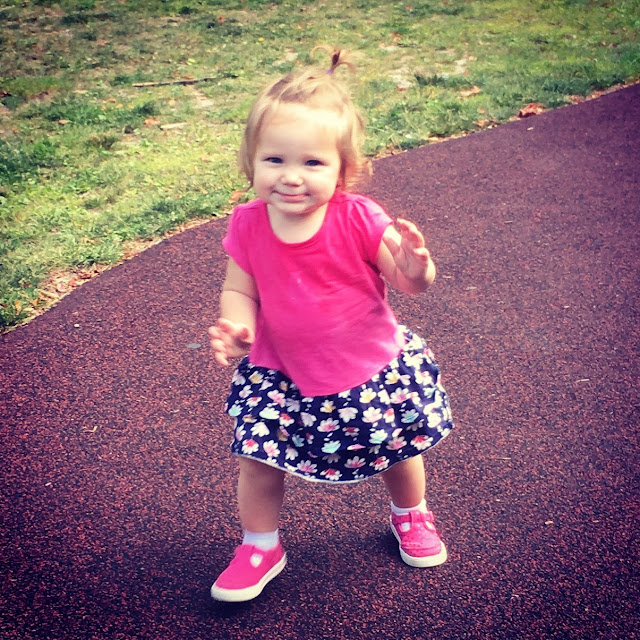 Her central apneas are almost completely gone.  This summer I thought that they were finally gone.

We were past it.

It had been almost two months since the alarm had gone off for anything other than a detached cord.

Then one night in July, the alarm started to go off.  I was getting the boys to bed.  I got up and walked into the room, but I wasn't hurrying.  I fully expected her to be standing there, at the edge of the playpen, looking at me, having pulled a wire off of her chest strap.  This happened several times a week and it hadn't been a real episode in so long.

She'd become such an expert at removing her oxygen sensor I'd stopped putting it on.  What was the point when she'd have it off in five second flat?  So the respirations per minute and heart rate monitors were all that was left.

But she was asleep.  Well, I thought, she still sometimes pulls wires out when she's asleep.  I glanced at the monitor.  It wasn't reading as unplugged.  I looked at her and realized that this was real, she wasn't breathing, and hadn't been breathing for twenty second when the alarm first started sounding.

I rubbed her back hard and she took a breath.  Two breaths while I ran by hand back and forth across her back.  I stopped and stood and stared at the numbers on the monitor.  The respirations per minute went up for a moment then started to plummet again.

I looked back at her and her back was perfectly still.  As the monitor read zero I turned her over and rubbed her chest and she took a big breath and then another and another. She had started to breath on her own.

The alarm went off a few more times in the following hour, but I stayed close by, and directed a fan towards her and finally whatever episode had begun ended and for another month everything was fine until, just as I started to relax and think maybe she'd outgrown it, it happened again.

Now once, not that long ago, this would have sent us running to the ER.  But when you have a baby that was stopping breathing 45 plus times a night, with the alarm going off all night long, it was a big deal that she needed so much stimulation to start breathing again, but not so out of the ordinary that I thought we should go in.

This was not all that long after being sent home after Maggie's seizures, and I'd been asked plenty of times by doctors if she ever didn't start breathing again on her own, and I'd said yes, and they'd nod and make a note, and that was that.  No one acted like it was that abnormal considering her diagnosis. 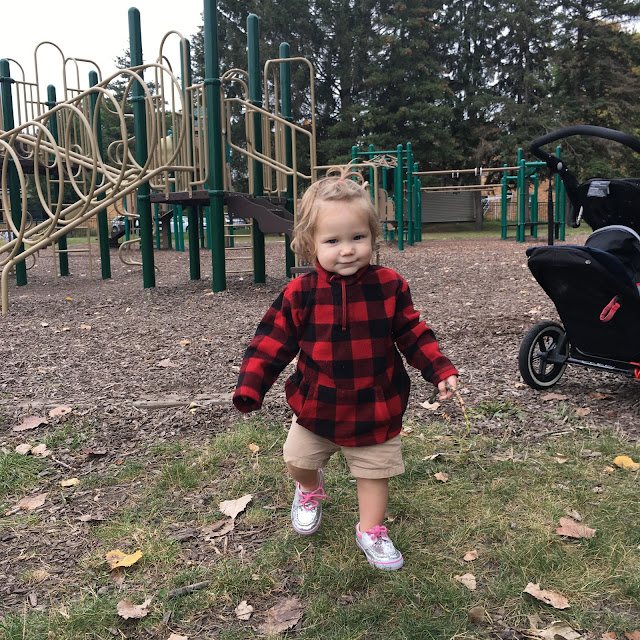 At Tessie's last doctor's appointment though, I mentioned what had happened and she paused and asked if I had called the pulmonologist.  I explained that I hadn't, because she hadn't seemed to think it was a big deal when I'd mentioned it before, but her primary care doctor did think it was sort of a big deal, and she had me call and the new plan of action was to go straight to the ER if it ever happened again.  Thankfully it hasn't.

It's been a month.

But lest I relax too much we had the scare of two and a half weeks ago.

We'd had a long day.  It was the first week of school for Maggie, and her first full day.  We'd been picking up and dropping off the big kids, playing at parks, and running Maggie to therapy and Sadie and Patch to gymnastics and by the time all of that was through Tessie was exhausted.

She fell asleep in the back of the car. 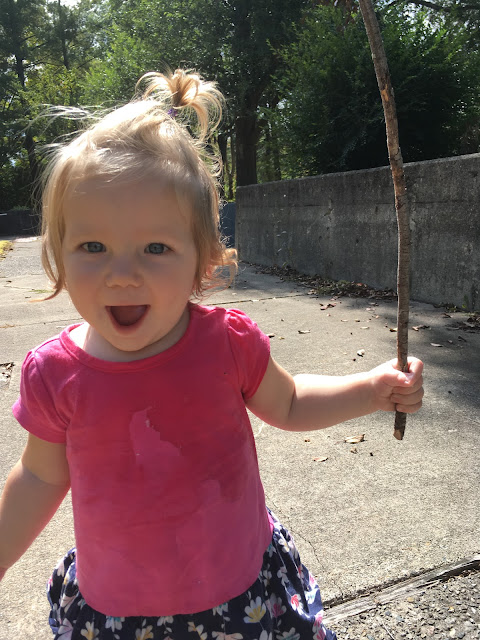 When we got home I was about to unload Tessie when I saw that she was asleep.  So instead I grabbed a bag and started pushing the pieces of school uniforms that had been discarded in the car between school and gymnastics into it so I could take them in and wash them.  When I straightened up and reached for Tessie I froze.

I called the neurologist in the morning and the doctor who sent us home from the hospital last time called back.  After listening to my description she said that it sounded very much like a type of seizure that occurs upon waking and that I needed to get it on video.  Which has led to some very cute videos of Tessie waking up, as I pull out my phone before I try to wake her, but thankfully no more seizures.

If I never have a chance to get that on video I will be perfectly happy if it means it never, ever happens again. 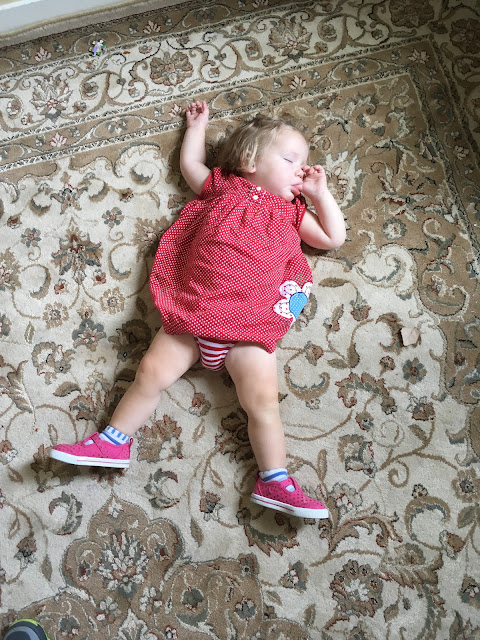 Unfortunately the last little scare was just last week.  It seemed small enough.  But it almost landed her back in the hospital.

Okay I actually do need to back up.  Earlier this year, shortly after Tessie's birthday, she narrowly avoided having to go back to the hospital because she couldn't figure out how to drink out of a cup and nursing was no longer enough to keep her hydrated.

But she finally figured it out and within an hour of a doctor who knew her from past appointments telling me to bring her in, after I mentioned her unusual heart rate to him during Maggie's EEG (and that while her pediatrician wasn't worried it just seemed odd because it was staying well over 150 beats per minute while she was asleep, and had been for a week) and he pretty quickly asked about fluids and said we need to bring her in ASAP (she'd had less wet diapers but was still having 2-3 a day).

Thankfully since I was out of the house for half a day at the EEG she was super motivated to figure out the cup and finally did and drank so much that her pediatrician said to watch her but that she should be fine without going in.  And by the next day her heart rate was back to normal. 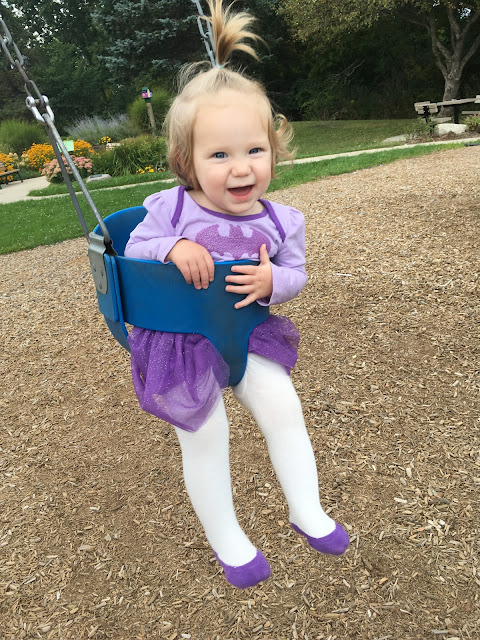 And that was great until last week when she promptly forgot how to drink out of the cup and would desperately try to drink only to have the water spill out of her open mouth.

By the second day of this I was freaking out.

I left messages with both her neurologist and pediatrician and made an appointment with her pediatrician for the next morning.

She finally began to refigure out the cup that night and got a few sips. The next morning she got a little more water down and finally had a wet diaper, while we were in the doctor's office, which the doctor told me kept her from being admitted then and there.

And she's back to guzzling water like a champ.

And that's more of less where we are now.

I keep thinking we're past whatever is going on and then something happens and I'm panicking wondering whether this is just a normal toddler thing or if it's something that should send us to the ER, because if the last year has taught me anything it's that it can be really hard to tell the difference.

Is she being normal toddler clumsy or having seizure?  How can these two things be so hard to tell apart?

I have a letter in my car that would admit Tessie, without stopping to register, to the PICU at our local hospital if she starts to become incredibly clumsy again, but do I use it if she's having an actual seizure, because I've been told not to bother coming to the hospital if a seizure is less than five minutes long, just to call the neurologist.

Honestly it can be so confusing sometimes and the line between "am I being paranoid because so much has happened" and actual panic because this can be really frightening is so fine.

But I'm clinging to the fact that she is totally and completely healthy the vast majority of the time.  And cute.  Let's not forget cute.  Although I may be more than a little biased.

The boys think she's pretty cute too though. 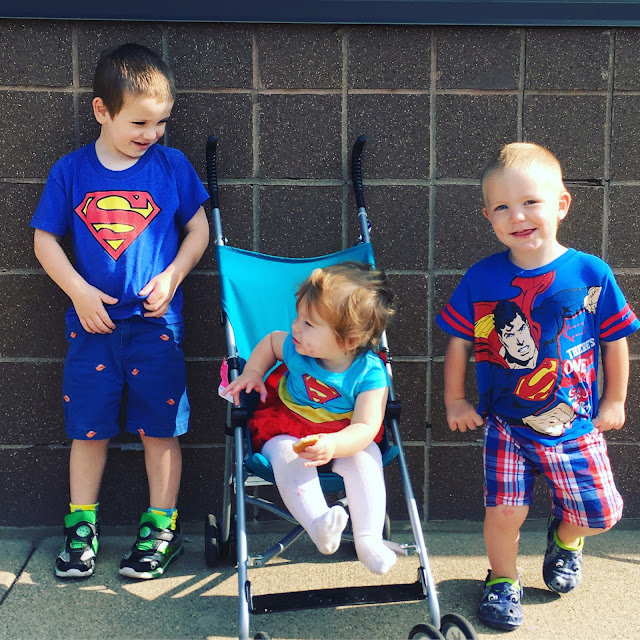