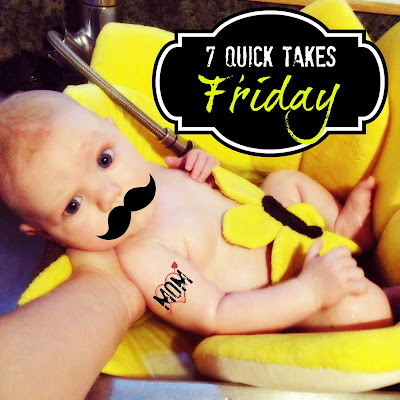 This week, back in Michigan, Paul has been dealing with bat problems.

As in bats inside of our house.

I didn't understand the magnitude of this at first.

You see growing up in California our cats occasionally brought bats in our house.  And we'd see bats diving for bugs in the backyard.  And my grandparents even had a bat house (like a bird house, but for bats) on a tree outside.

So when Paul told me that a bat got in our house I laughed and asked if he got it out and then was baffled when he said he called an exterminator. "For a little cute bat?" I may have said, picturing something like Stella Luna.

You see. growing up, those bats were teeny tiny.  I knew that there were bats that were larger, but I pictured them swooping down in rain forests in South America, not terrorizing homeowners in a city in Michigan.

And so, after a day of wondering why he didn't just shoo the thing out with a broom I asked exactly how big this thing was and he said about a foot and the picture in my head came crashing down.

Until I decided he was exaggerating.  There was just no way.  Sure bats get that big, but not in the US.  Twelve inches isn't a bat.  It's a small bird of prey.

So I settled in to do a little googling.  And after clicking on one website about the nine species of bats found in Michigan I made it through two entire paragraphs before I mostly had to stop reading because oh how wrong I was.

There were far too many bats over a foot across on that page and one that grows to fifteen inches.  I still shudder to think about it.

But not as much as I shuddered when Paul called and informed me that a bat got in the next night too.

The exterminator has now been out three times and they're working on bat proofing our house.

I do not want to see Maggie taking down a fifteen inch bat in our living room.

Today I had to drive into "the City" to get him a few new outfits because he's outgrown everything I brought with us.

I knew we were coming out to California for two months.  He had been in six month clothes before we left and he'd just outgrown them and I'd pulled out all the nine-month clothes and packed the smaller clothes away.

So I packed an assortment of nine month clothes and he outgrew him a couple weeks ago but I kept squeezing him into them and I got on twelve month outfit, but that looked too small by the second time he wore it and so today I purchased a few eighteen month outfits and look: 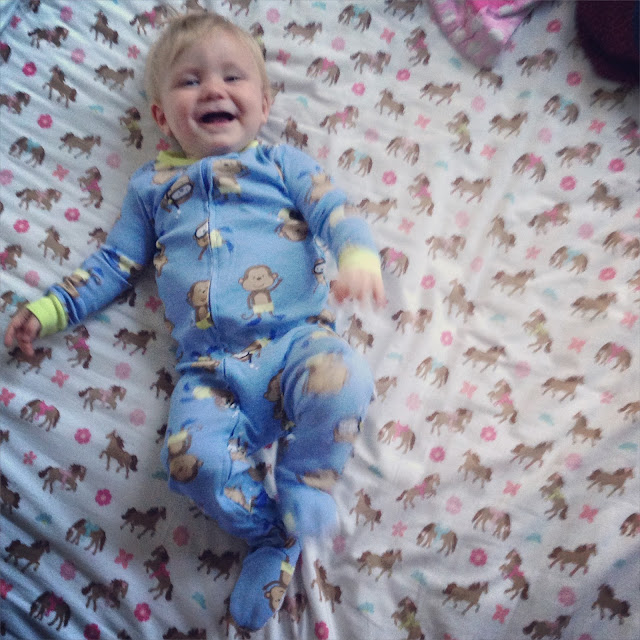 It's a tiny bit long in the arms and an even tinier bit too long in the legs, but it's perfect for him to wear right now.  And hopefully it that "tiny bit too long" will give him a little time to grow and last at least until we get back to Michigan (and hopefully longer).

I'm pretty sure it's because he's determined to keep up with his big brother in just about every way.  They're pretty inseparable these days: 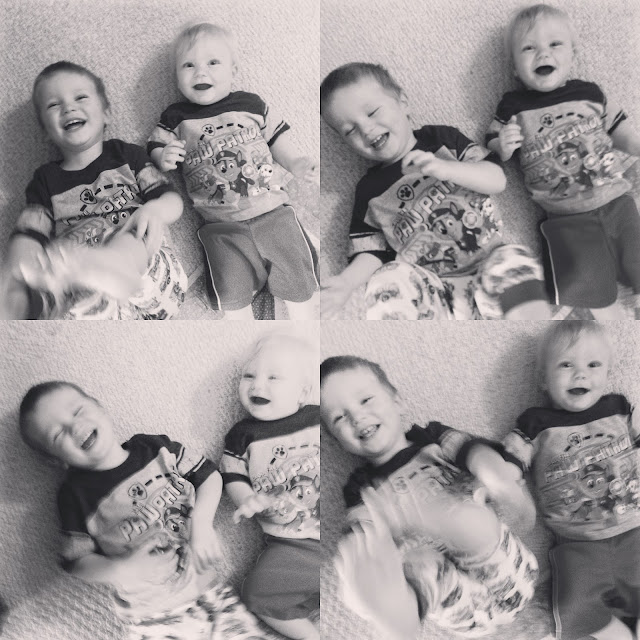 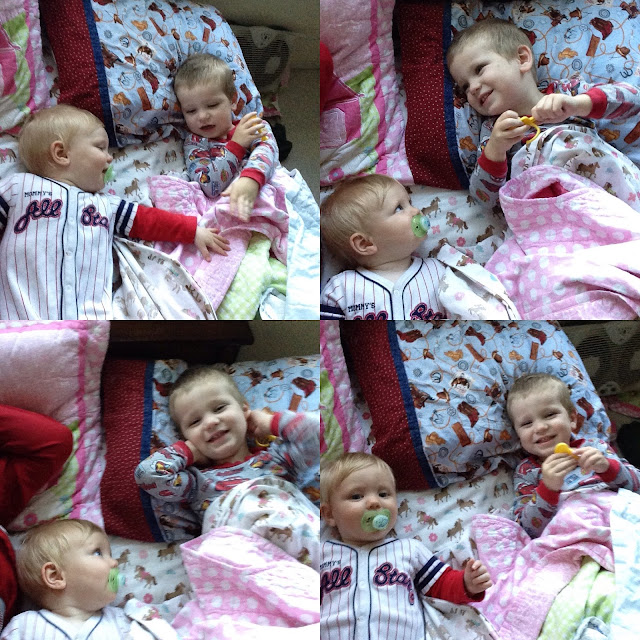 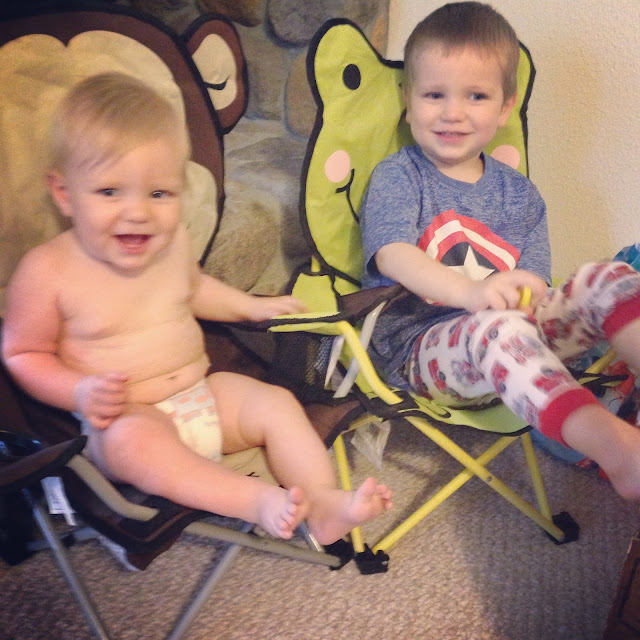 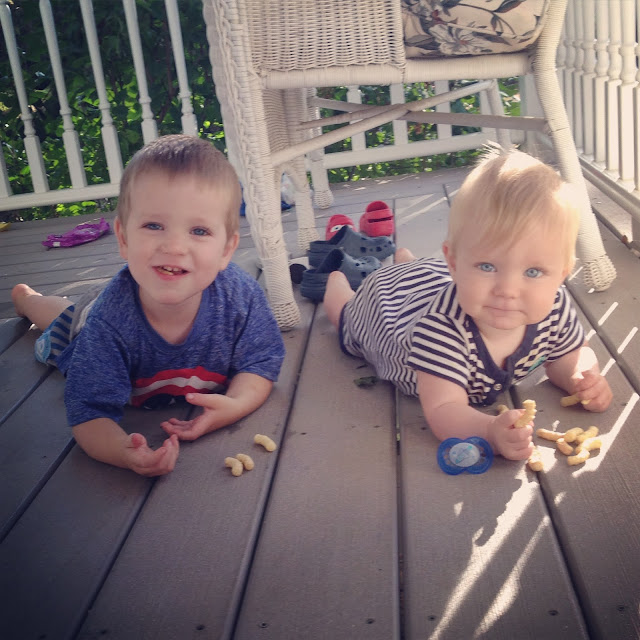 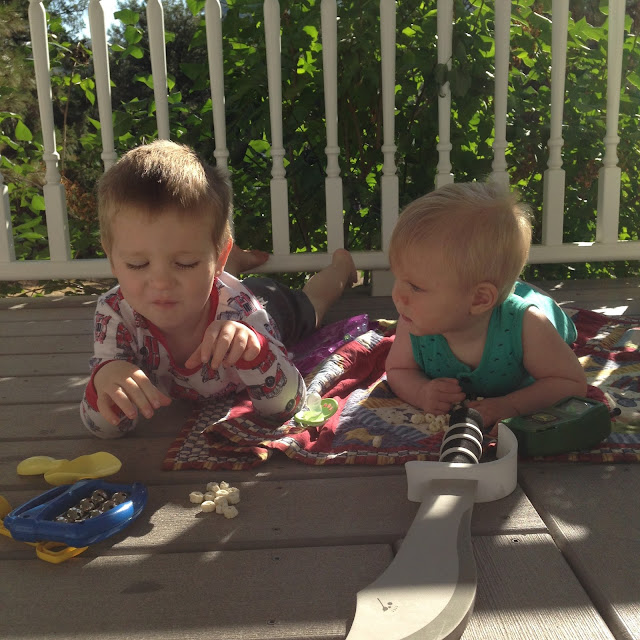 I'm really liking the not-quite-two-years-apart age gap for these two.

The girls have both been running a lot, which I'm totally encouraging. 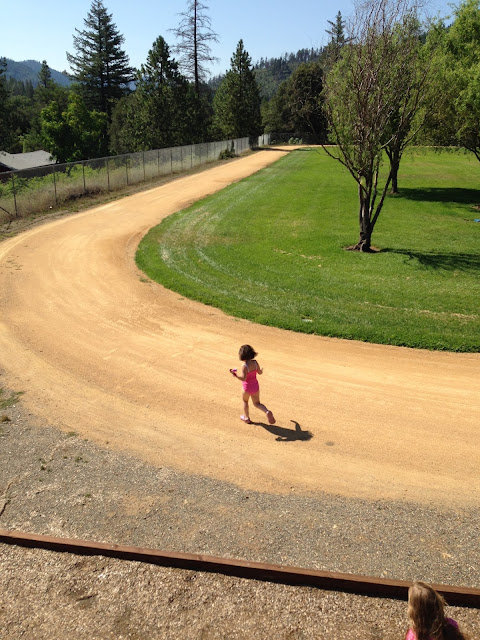 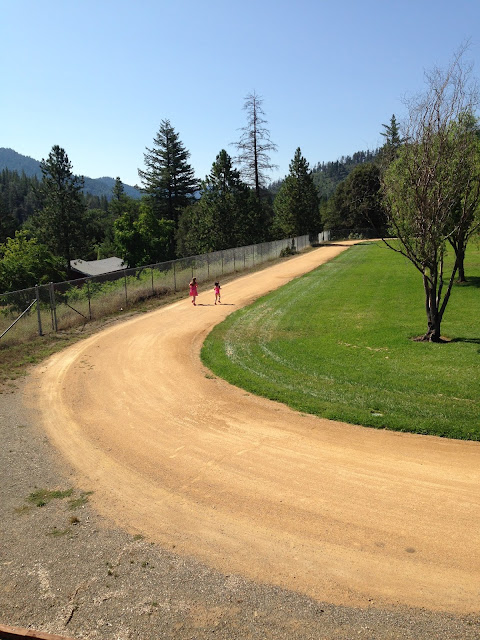 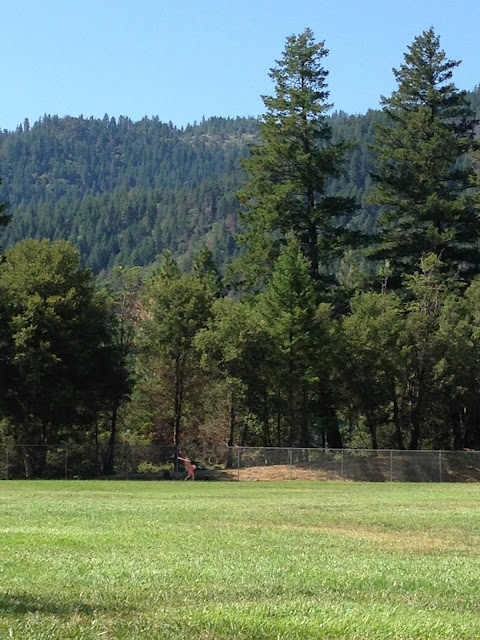 The first time we took them out on the track Maggie ran three quarters of a mile before calling it a day.

I think I need to find an easily accessible (fenced) track near our house when we get back to Michigan.

Patch still can't say his r's.  Or his g's.  So perhaps this hat that James loves was a poor choice.

But with his fair complexion he really needed a hat.  And he looked so cute in it.  And the kids are a little frog crazy since they've been catching frogs on the porch all summer. 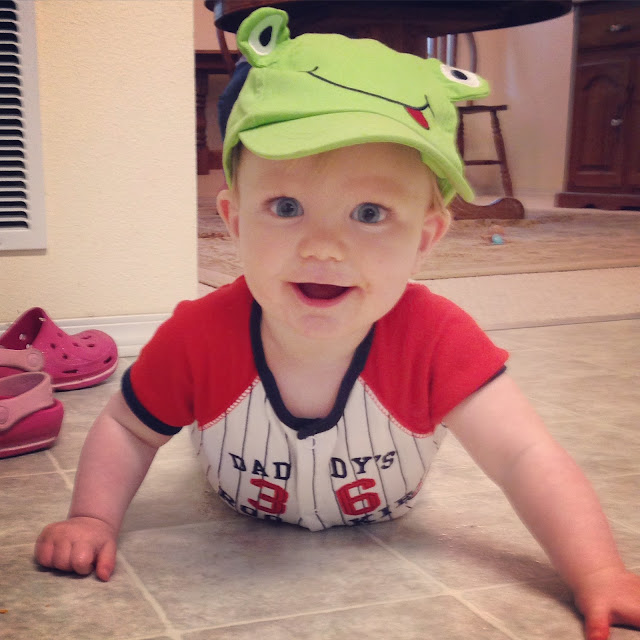 So on the night of the first bat incident, Paul walked out of the house to go to the store and what did he see? 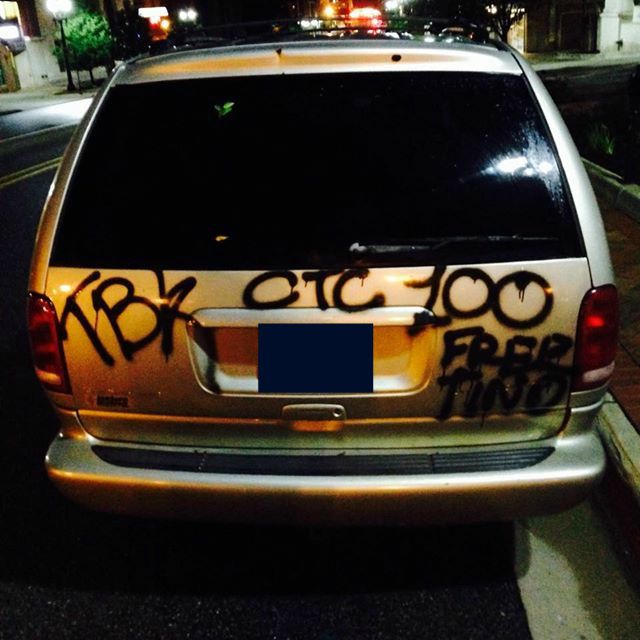 I mean, our car has been hit and had quite a bit of damage in parking lots since we've moved to Michigan but this takes the cake.

We reported it.  And thankfully it washed off with a power washer: 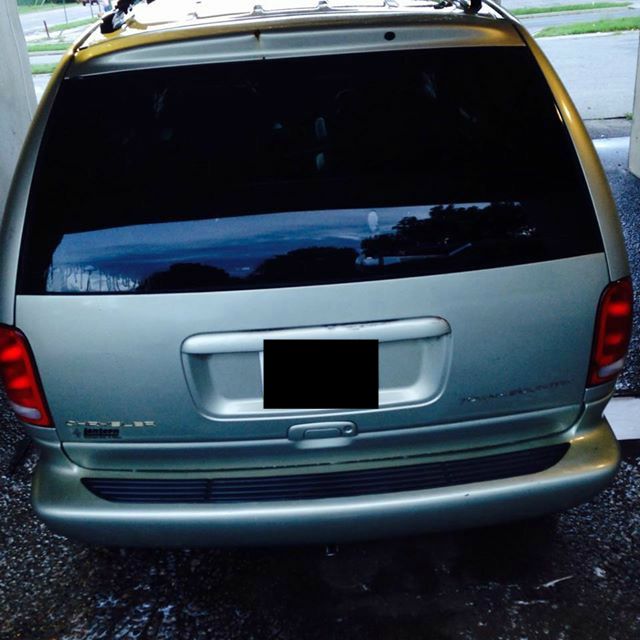 But still. Somehow this is way more upsetting than the two foot dent in the back side panel above the tire, since you know it was intentional.

Maggie's been determined to get out today.  She's already gotten through two sets of deadbolts twice.  She's stealthily moving furniture around to reach them and she knows how to work them all now.

Reading the social stories about not going out of the house is doing nothing.  at all.  So it looks like I'll be on my toes today.  All day.

The other day she hurdled a fence and Patch screamed:  "Maggie running!  Maggie running!" so at least just about everyone around here knows to spring into action when she makes an escape. 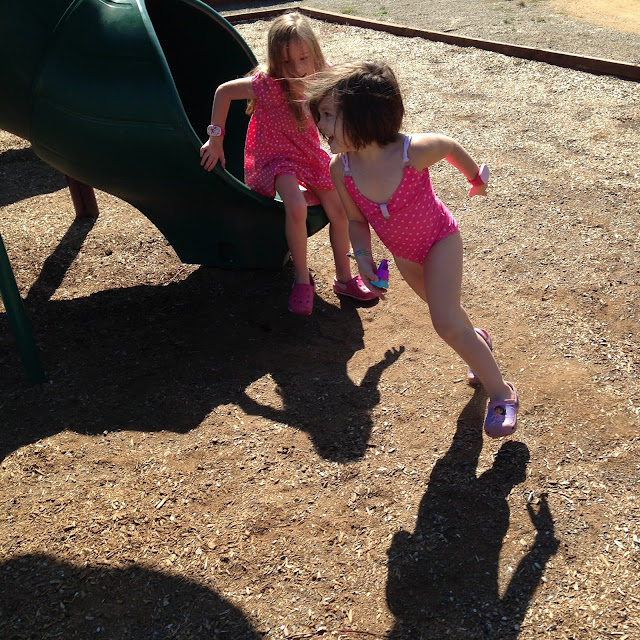 And prayers are greatly appreciated.  Because she's fast.  And if you glance away for even ten seconds she's gone.

For more Quick Takes head over to This Ain't the Lyceum.
Posted by Cammie Diane at 10:55 AM