This year I had grand Advent intentions, but I also had a creeping feeling that the morning sickness was going to thwart those plans and in a way it have.  Or at least, it's provided an unexpected Advent, which probably is exactly what was needed even if it wasn't on my checklist.

Still I've tried to step things up for a few of our favorite feast days, and the kids were pretty excited about how they turned out.

I started with Saint Nicholas' Day on the 6th.  The 6th was the end of that tough weekend when I mostly stayed laying down, and Sadie was a huge help getting everything ready: 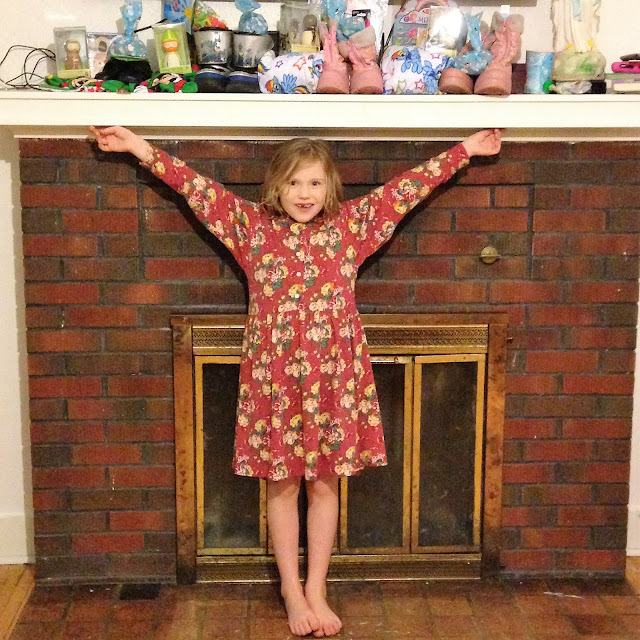 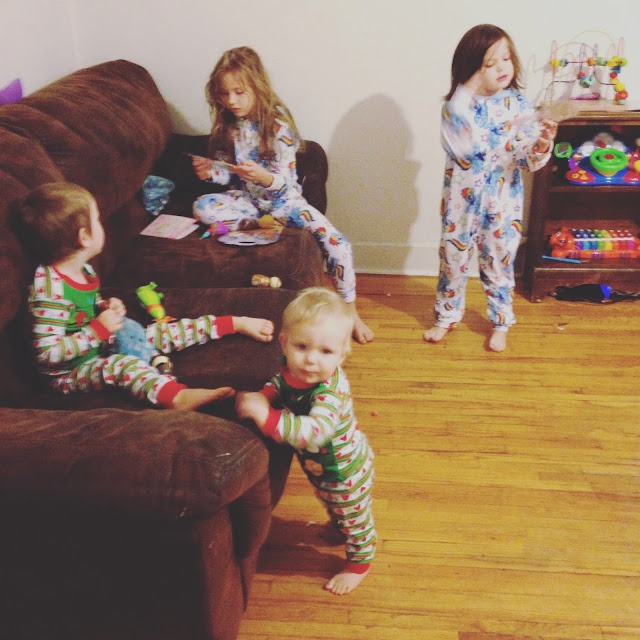 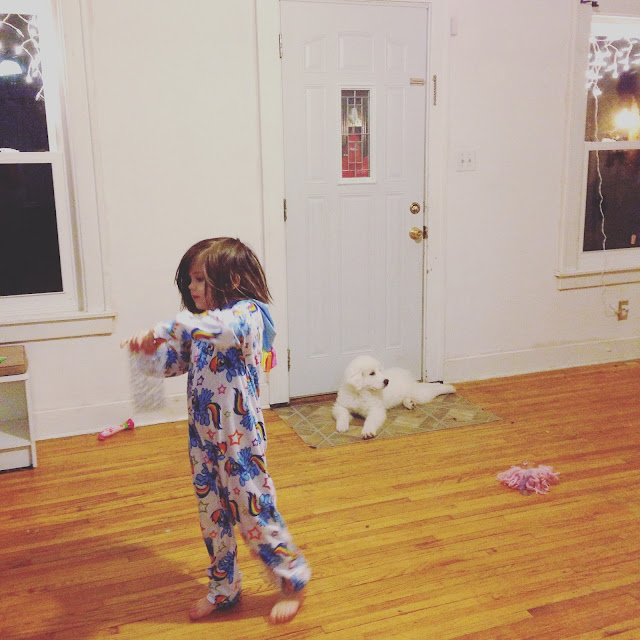 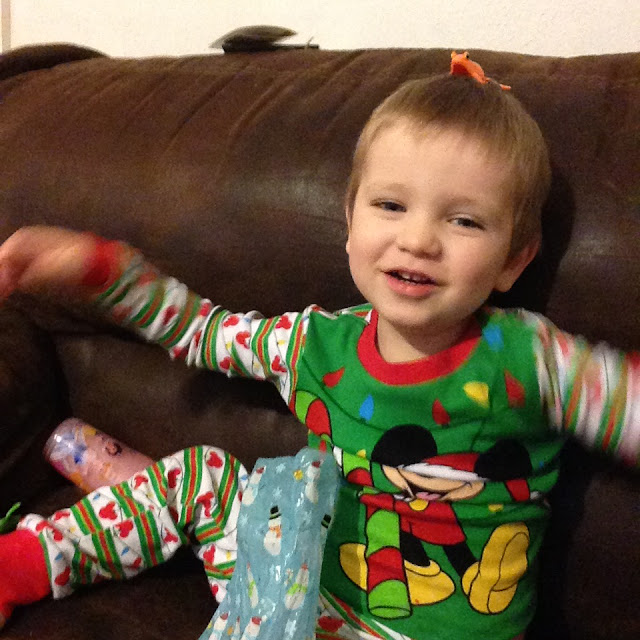 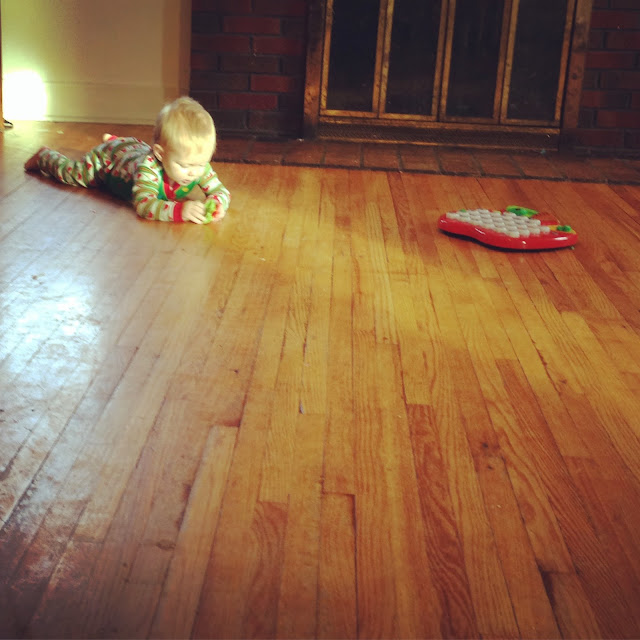 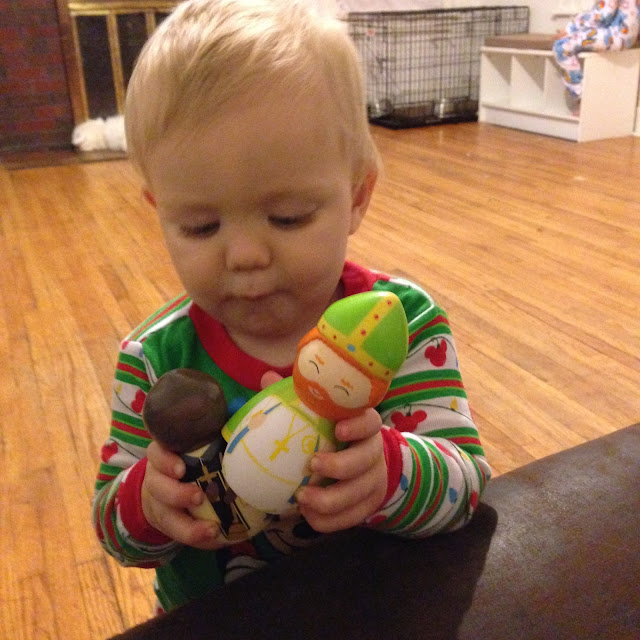 On the Solemnity of the Immaculate Conception I actually felt well enough to go to Mass.

There were a few moments in the parking lot when the morning sickness made a last stand, and I seriously considered getting back in the car and calling it a day, but once we got inside I was actually okay and the kids were actually pretty good.

Before Mass Sadie had asked me to cut her hair and I did.  So after Mass was over she posed for a picture to show off her new hair cut. 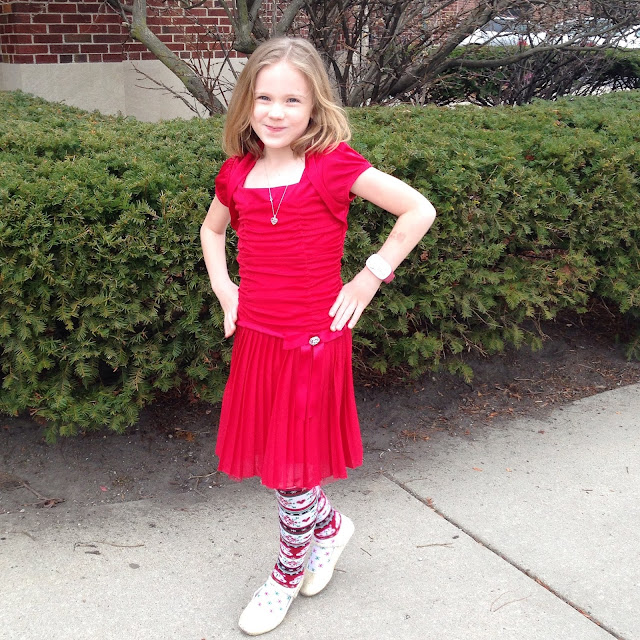 And we tried to get a picture with all the kids, but it was really like a series of outtakes where all the kids looked everywhere except at the camera. 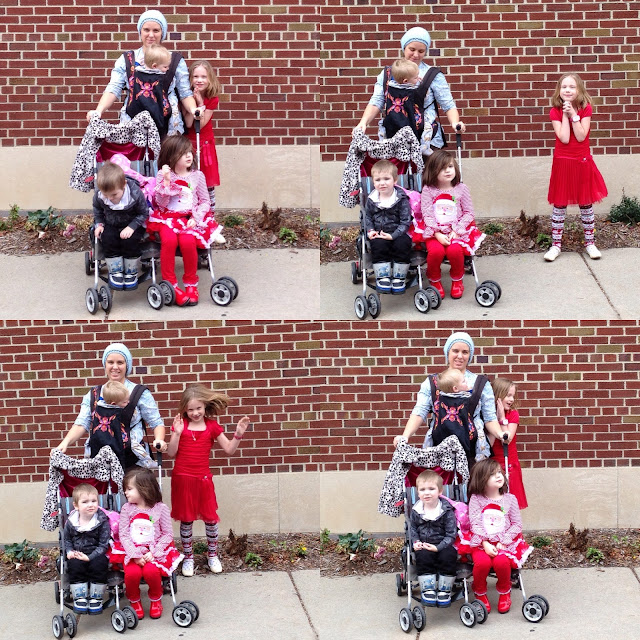 The next day we hurried over to the tree lot and, for the first time since we celebrated Christmas in Florida in 2011, we got ready to set up a big Christmas tree (as opposed to a teeny tiny one on the mantle that Maggie couldn't reach).

I just had a feeling that, if we set it up off the floor, and got a heavy duty stand and huge screws and bolted it to the table it was on, Maggie maybe wouldn't destroy it this year.

We'd done a couple test runs with the trees in the building where she has therapy, and since she hadn't a) removed ornaments or b) tried to climb them I thought we stood a fair chance.

So we let Sadie pick out a tree: 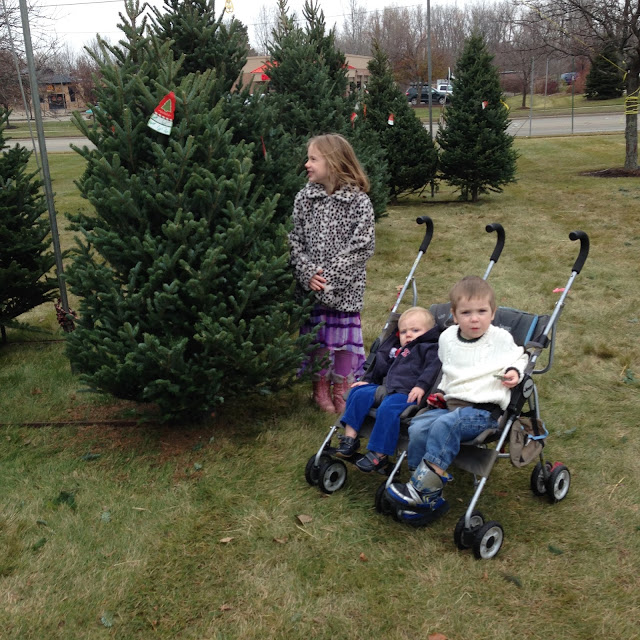 And got ready to haul it home.  James, as usual, was totally unimpressed by everything that was going on around him and wasn't really sure why he'd had to come along at all. 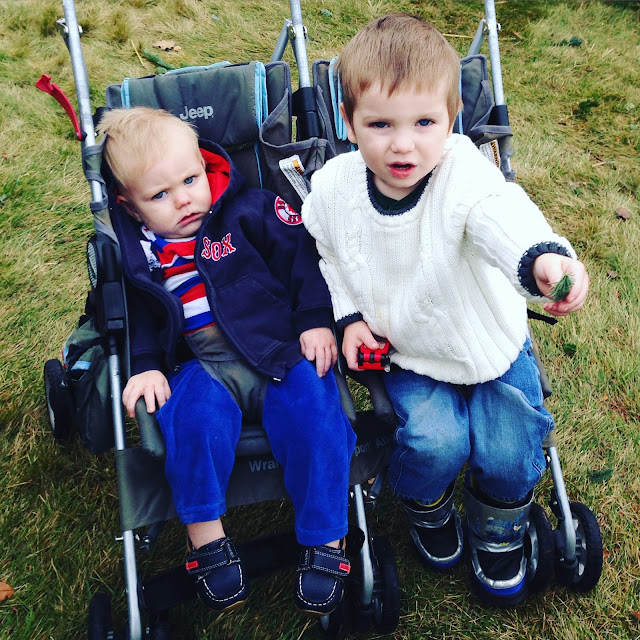 Once the tree was set up the decorating began.  Maggie had a high fever and was home from therapy and watched the decorating, while Patch demanded ornaments and then screamed at the top of his lungs when he couldn't get them to stay on the tree.

He finally settled in handing Sadie the ornaments once I put the hooks on them, with occasional outbursts when she wasn't decorating at the exact rate that he thought was appropriate. 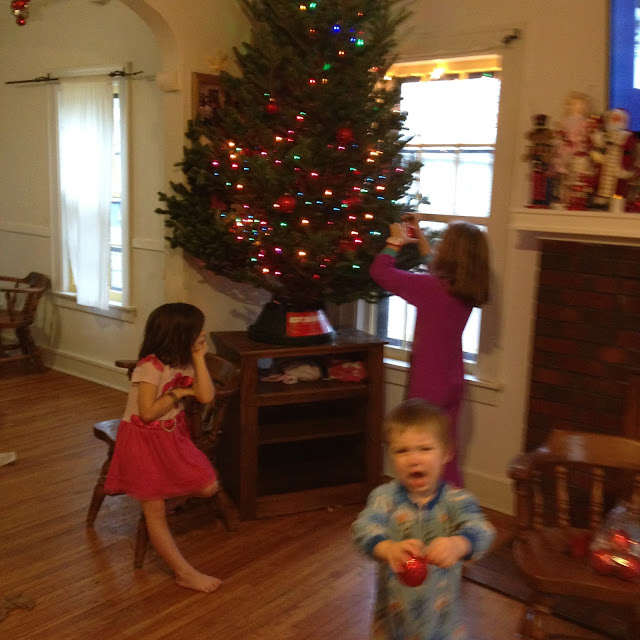 I was particularly thankful we'd invested in some "shatter proof" bulbs, when they were on clearance after Christmas last year.

Although I can assure you that if you have a dog who can reach those bulbs (in this case on her hind legs while reaching as far as she possibly can with her neck), they are not puppy proof.  Luckily they're just plastic and not sharp when they're shredded by Great Pyrenees teeth. 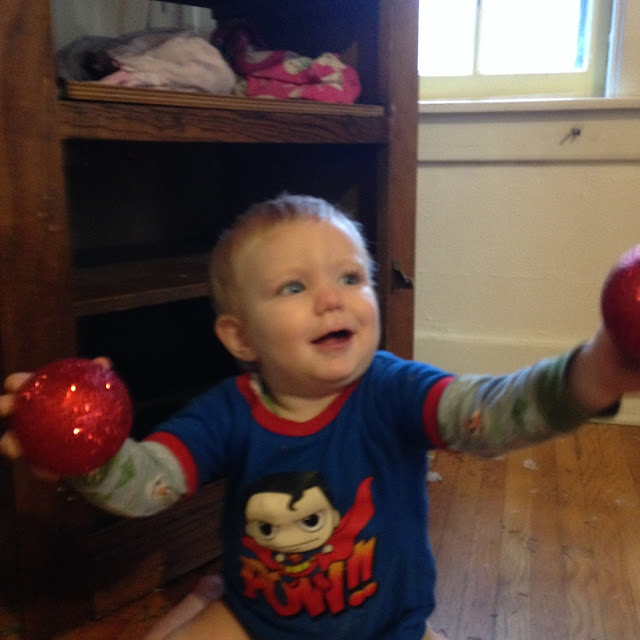 Patch was convinced that every tree comes with a monkey.  I have no idea where he got this idea but he spent a full two days walking around, peering into the tree, and saying "I don't see it.  I don't see monkey?  Monkey?!?!?  Monkey?!?!?! Where are you!?!?!?!"

He also sometimes stands under the tree and tells everyone not to touch it, which irritates his biggest sister to no end. 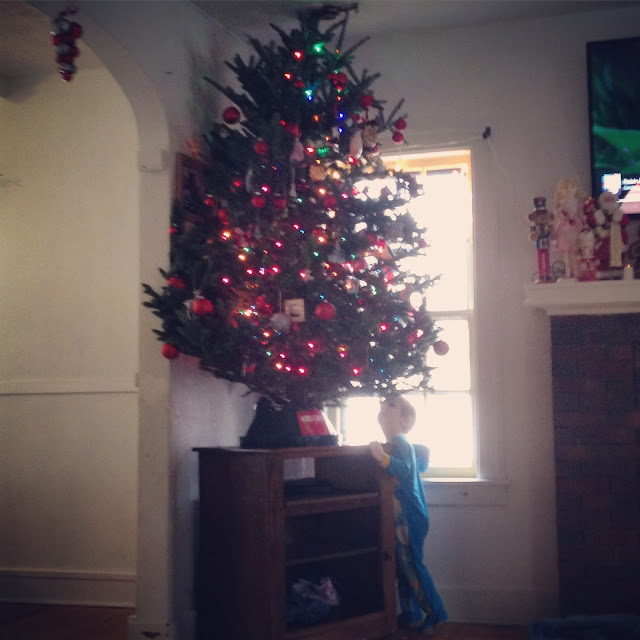 So far the tree is still standing and only four ornaments have been demolished.  And Maggie was only responsible for two of them.

For this feast I found a wreath for $7 at Meijer that looked like it was roughly the size of Sadie's head.  I had some small battery operated tea lights that I picked up last year during the week after Christmas when they were discounted and I twisted the wreath around the lights until they stayed in place.

Then I found one of Sadie's favorite white dresses and a red scarf that we had downstairs and voila, we had Saint Lucy.

The night before the feast I took down a package of Aldi gluten free pizza (it's dairy free too) and I dumped in about a cup of sugar and a bunch of cinnamon.  I mixed it all together, greased up a pizza pan, and formed the pizza dough into a wreath and baked it.

The resulting bread was a huge hit.  All four of the kids came back for seconds and thirds and fourths until it was completely gone. 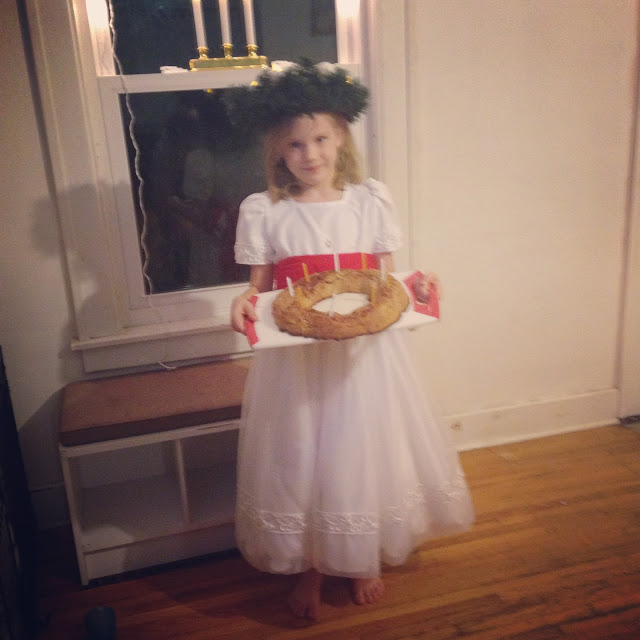 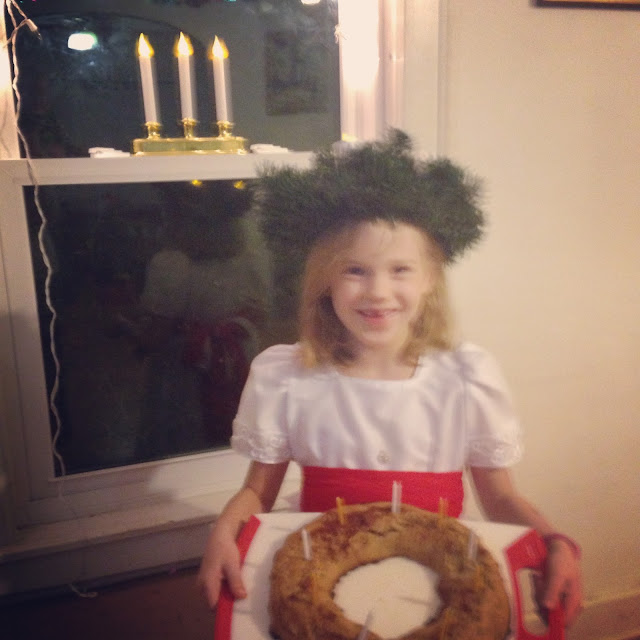 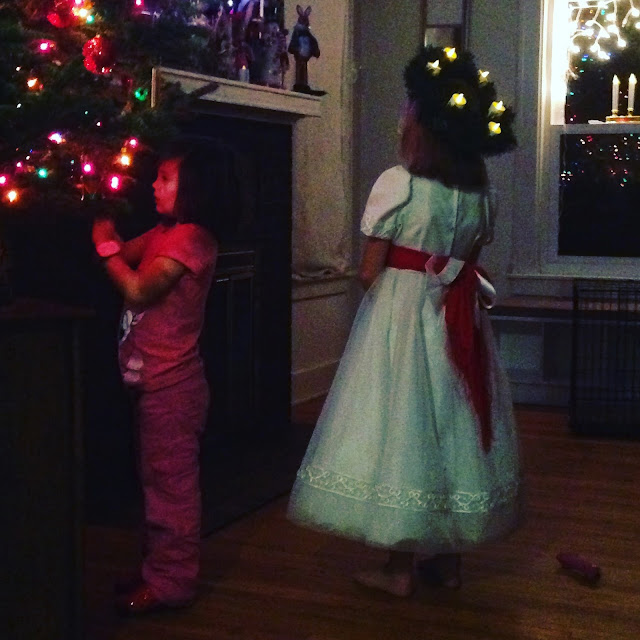 Later in the day Maggie put on her mermaid costume and I let the kids break out the Kindle Fires that they were given, in the hopes that if Maggie watches Patch play on hers enough, she may actually try to use it.

She isn't a fan of screens at all the vast majority of the time, but this Kindle has an app that works like PECS board (to help her communicate) and I would love it if she would give it a try when she's having a hard time telling me what she needs.  I loved seeing her sneak over and look over Patch's shoulder.

I'm pretty sure that's progress because she's actually voluntarily looking at it instead of coming over and flipping it over so she can't see any part of the screen, at all. 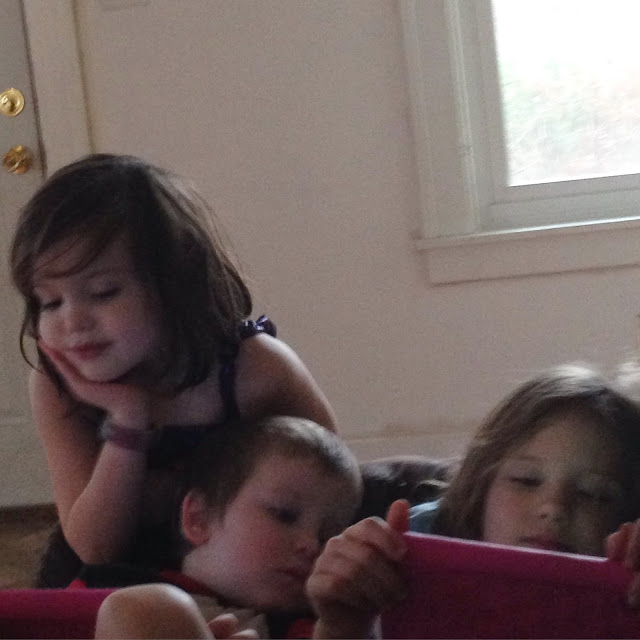 During a run to the store Sadie showed had tall she's grown when she hoped on Sandy.  I completely failed to get a non-blurry picture... but I had to share this one because look how tall she's gotten! When did that happen?!?! 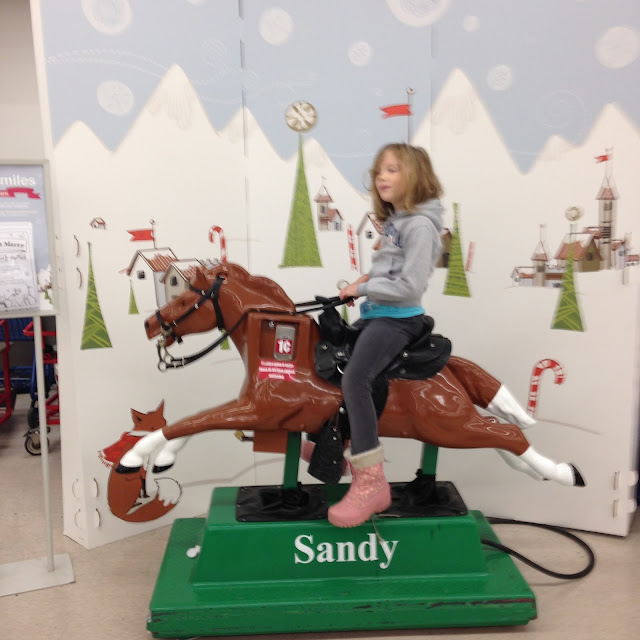 And those are all of my favorite pictures so far from this slow paced Advent! 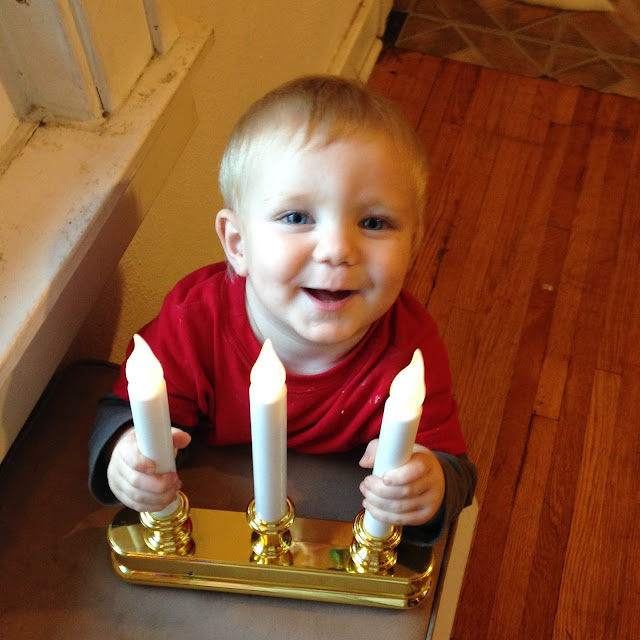 I hope that you're having a wonderful season leading up to Christmas!  Can you believe there are only nine days left?
Posted by Cammie Diane at 8:08 AM