Yesterday there were a flurry of posts on social media about a Catholic Church in Charlotte, that happens to be one of the largest Catholic Churches in the country, and the steps that they are taking to increase security.

An article in the Charlotte Observer states:


The safety measures will include uniformed and plain-clothes police officers at all weekend Masses along with hired security guards, Monsignor John J. McSweeney told parishioners in a memo emailed Friday.

The Charlotte church is also banning a list of 15 items in all worship halls. They include: large bags, backpacks, diaper bags, laptops, computer cases, luggage, video equipment, laser pointers, baby strollers, and anything that can conceal items or that clergy and staff determine poses a security hazard.

The church has already added cameras throughout its sprawling campus. The new measures, McSweeney said, were approved by the church’s safety awareness team.He told the Observer that the measures aren’t a reaction, but “a proactive piece of planning we have for security."

I have to admit that my first thoughts as I finished reading the article was to imagine what wold happen if these safety features were being implemented at our parish.  Or worse yet, what if they caught on and became standard at parishes across the country? 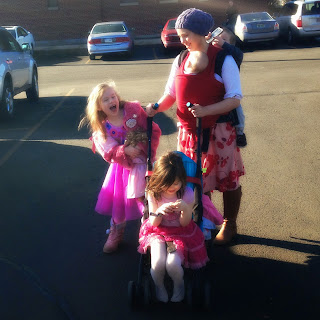 Mass would be completely impossible for us.  We would no longer be able to go.

Life without a diaper bag wouldn't be the deal breaker for me.  I think I could probably stuff the epi pens and allergy meds into a bag small enough to take inside.  The inhaler that we carry is small, but the spacer and little kid's mask isn't, adding another challenge to the packing of a small bag.

And maybe even a diaper or two could fit into that bag, although I think back to the long months when we had a refluxy baby, who we'd change immediately before Mass and then likely have to change (we're talking entire outfits) another two times before Mass was over because no matter what we did her stomach was miserable and her outfits, and our outfits, were likely to be ruined, forever and ever, on any given day.

We haven't had a baby like that in a long time though.  These days the deal breaker would be the umbrella stroller that comes in with us to Mass each week.

I'll start by explaining why the stroller has become so necessary because over the last couple years it has become clear to me that it is something that bothers some people and that if there's any hope that they understand why it's necessary for us, it needs to be explained.

There have been looks.  Frowns.  Shaken heads.  People do not understand why a child so large isn't sitting quietly in a pew.  Why does she need a stroller?  One couple earlier this fall looked as though they really, really wanted to say something as they turned fully in their seats and shook their head through the glass door at me for the entirety of Mass, mouths turned down in frowns despite the fact that she was completely silent. 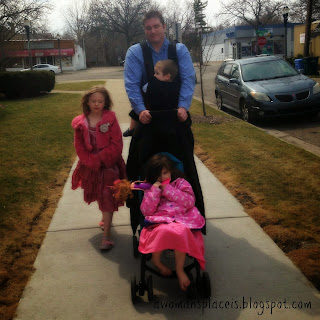 At the time I came up with the response in my head of "Why don't you step over here with me and tell Father what your complaint is?" as I readied myself for the words that looked as though they might bubble over at any moment.  It didn't come, likely because I had to take a certain two year old out at the very end of Mass and wasn't there to enjoy whatever it was they seemed bursting to share.

The vast majority of people are kind.  99 out of a 100 are welcoming.  I don't want to make it seem otherwise because I love our parish and most people are absolutely amazing.  But it's hard to miss the shaken head and glare of disgust by someone who won't look away when they see Mae in the stroller that she needs to get through Mass, or hear her sweet chirping voice when she's excited.

At this point we don't ever go in through the glass doors anymore.  We stay in the vestibule.  I tried going in for a while, but she would giggle, or squeal with glee as she stared at the cross and even while I quickly shuffled out with her I would see the looks (which are not the same looks I get on those rare days when I have James with me by myself and he lefts out a cry).

The looks made me sick to my stomach.  I would stare back, waiting until they finally dropped their gaze.  Sorry, no, you don't glare at my four year old (I haven't tried it since she's turned five).

I'd need to go to confession for the thoughts that would fly through my mind.

It hasn't been a problem lately though, because the last two months the morning sickness have allowed me to go to Mass exactly one time,

But I've gotten away from the point.  The stroller.  We wouldn't be able to go to Mass without the stroller.  Whether or not people understand it, it's her safe space in a busy, noisy, incense filled world. 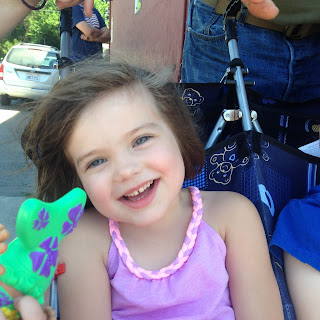 Maggie has a hard time with certain sounds.  Some of them, we know.  If her sister coughs one time, her face will crumble and she will collapse sobbing "hurts" and clutching her head.  If she hears certain musical instruments, or sounds, the response is also painful.

Often she's excited to Mass.  I've seen her throw back her head and positively glow with joy at the consecration.  Sometimes I hear her whispering to herself about Jesus as she stares at the crucifix.

Other times, that are far more rare, it's clearly too much.  Her stroller, however, has become a safe place.  Most days she sits in it quietly now, but when we've tried to remove the stroller things have gone dramatically in the wrong direction.

One particularly memorable Mass we tried and I got to go home with a broken nose from a stray flailing (and entirely unintentional) kick to the face from the terrified child.

So for the time being, the stroller stays.

I understand the security concerns that have caused this Church to take the steps that they obviously feel are necessary to keep people safe.  The climate we live in is very much filled with fear and this is honestly one of the less radical ideas I've seen suggested.

I hope it doesn't catch on though.  I hope that before they ban the materials that make it possible for many families to go to Mass, they set up walk through metal detectors and have those uniformed police officers that the article mentioned (or perhaps other security personnel), check large, worrisome bags like they do at Disney World (or like they do at the local ER). 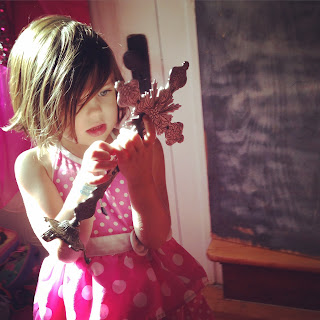 A check of strollers outside would be easy to do as well.  Ours has no baskets and no place to hide anything.  It is, quite simply, a seat to help our daughter feel safe.  Again, I'll use the Disney World example where people without large bags or strollers can go in one line, and those who need to be checked go through another.

I also can't help but wonder what comes next.  Will we be taking off our shoes so they can be checked?  Pat downs at the door?  Evil people have come up with plenty of ways to attempt to bypass security checks.  Is that pregnant woman really pregnant or is she concealing something else beneath her maternity shirt?

Mass can be really, really hard for some families.  I pray that we don't see this sort of thing expanding and catching on at other parishes, and making it incredibly difficult, or even in cases like ours, entirely impossible, for families who are trying to raise children in the faith to go to Mass.

Read more here: http://www.charlotteobserver.com/news/local/article49331535.html#storylink=cpy
Posted by Cammie Diane at 8:35 AM