I finally got the picture that I've been hoping to get for months.

I've described what Maggie's eyes look like over and over again to doctor after doctor.  I'd been told it would be helpful if I could get a picture, but getting a picture when she's having a migraine isn't the easiest task.

Last week she came home after a rough day at occupational therapy.  Usually we hear about how great OT has gone and she's always incredibly impatient to go, so I was surprised when Paul brought her home and said that it hadn't been great and they were wondering if OT should be stopped.

While I tried to keep my head from exploding, and hoped that maybe something had been lost in translation when Paul brought that particular gem (because I find it hard to believe that the child who cries hysterically in pain every time her sister coughs doesn't need sensory focused OT), I took Maggie up to our room and noticed that she definitely seemed a little under the weather.  She lay on the bed while I hung Christmas lights on the windows and set up a line of little fake candles on the window sill.

She was quiet, but happy to watch the lights and look out the window.

After a while I lay down next to her and let her look at herself in the camera on my phone.  She loves to do that: 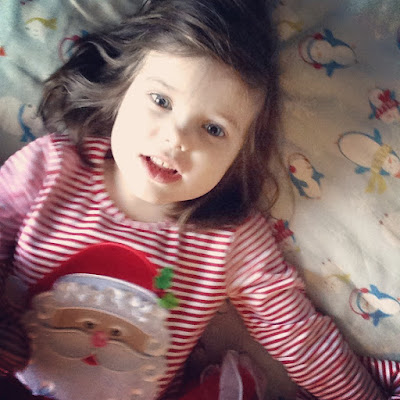 It wasn't until the next day, when I was looking at the pictures, that I realized what I'd captured in the pictures: 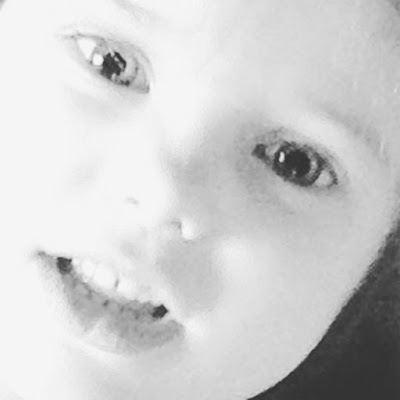 Here's an example of a moment when, after being in a bright room for about fifteen minutes, her eyes weren't dilated to the same size.  This is what all the doctors' appointments have been about.

It's a relief to finally have a picture to show the doctors what so many family members and therapists have seen over the last eight months.

I think it's very likely migraines, as the doctors have suggested.  I'm so thankful the MRI was normal.  She does have some moments that seem like they might be absence seizures, so we're keeping an eye on those, although I can't imagine that we'll be able to perform the test the neurologist would want to do to confirm those (Maggie, holding still for half an hour with sensors attached to her head?  I don't think so).

Now hopefully, after a rough week last week, we'll have a migraine free week this week!
Posted by Cammie Diane at 8:41 AM