A Little Bit of Everything

Today is the day of Tessie's intake evaluation and I spent yesterday afternoon pouring over hundreds of pieces of paperwork trying to decide which ones would be the best to take with me, which best painted the picture of the last eighteen months of development.

I don't think they were quite expecting this when they said to "bring any paper work pertaining to her development if you have any" during the phone call.

In other situations I would have taken the entire file, because there are times when having every detail is helpful, but today is not that day.  I don't want to overwhelm what is important.

Thankfully she has developmental evaluations and reports since she was three months old, and I also pulled out all the big tests and reports, although the biggest, the first genetic testing report (which doesn't have any genetic testing in it, because at that point they wanted to hold of on more neurological testing, but which had tons of developmental information and basically had all of her medical information in a very nice very long report) is missing somewhere and I cannot for the life of me find it. 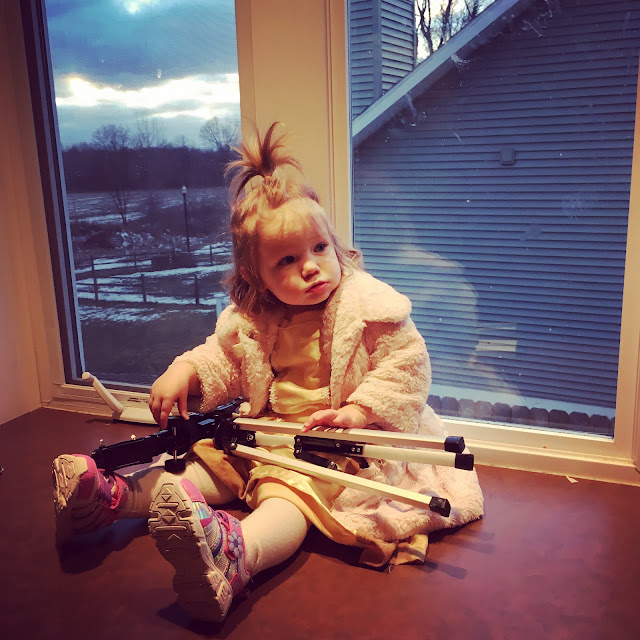 Below is the video I let the kids make (I'm not sure I mentioned if I mentioned before the boys somehow discovering unboxing videos on Amazon Prime and thinking they were the best things ever?), but it is here, not because it's an unboxing video but because if if you press play it goes to the last 10 seconds automatically, which show Tessie looking at me for the longest amount of time that she has ever looked at me, in her entire life, and blowing a kiss, and I've watched it, over and over again, and will probably go on watching it, for a very long time.

And I wanted to share it with you here too, because it's just about the best thing ever (and has nothing to do with the rest of the video, which is Sadie using the weirdest sewing machine I've ever seen).


On a totally different note:

Last night was... well... fun until the last two minutes.

But all of the kids had fallen asleep by that point anyways (Sadie made it the longest, Patch the second longest, both were out cold around the fourth quarter).

I think that videos with Paul are the most fun, especially sports videos.

When I filmed that last part I was really, really waiting for the come back.

There were a couple touchdowns and calls I am pretty sure I am going to be hearing about for the rest of my life.

Now to explain to a certain mermaid why she isn't going to school today (snow day 532 this year... every one equally upsetting when you love going to school and changes in routine are hard).

In somewhat amusing news, my suspicions that she is holding out on us with her reading skills continues to grow.

Throughout Maggie's life, now and then, there have been times when Paul and I have thought that she might be capable of reading more than we can demonstrate.  It isn't totally unusual for small kids with autism to be able to read, but I also know that most of my friends with kids who had hyperlexia seem to know that there kids could read.

With Mags, there were suspicions, but we have mostly thought that she cannot read more than a few words. She'd look at books but the pictures always seemed to be the main draw.  If books don't have pictures she isn't looking at them.  And they've been working on reading with her at school for years with a mixture of results.

Yesterday she walked by me carrying a small scrap of paper that caught my eye. I stopped her and she handed it over.

It had been torn from her teacher/parent daily notebook that goes back and forth (and that she had, until yesterday never torn).  The small portion she had torn out said that she had tried eloping from the classroom twice, for the first time all week.

She smiled at me as she handed it over and then took it back when I was done reading it.

I went downstairs and found the notebook in her bag.  The rest of it was in one piece.  Only that little message had been torn out.

I have to say.  I think the mermaid might be holding out on her reading lessons.  Or she just knows that her teacher would be sending home a note.

Either way, it was pretty smart and pretty sneaky and not a bit surprising.