I didn't think that this week would come for a couple more years, or at least that it wouldn't arrive for another year at the earliest.

But then Tessie was accepted into an amazing preschool program.

There are around a half dozen kids in her class who are on the spectrum. The youngest are two, and they go all the way up to five (those who are going into kindergarten next year). Each child has a therapy tech assigned to them for a few weeks at a time, so stays with them for the entire day. The techs rotate throughout the year, so that they all work with the kids. 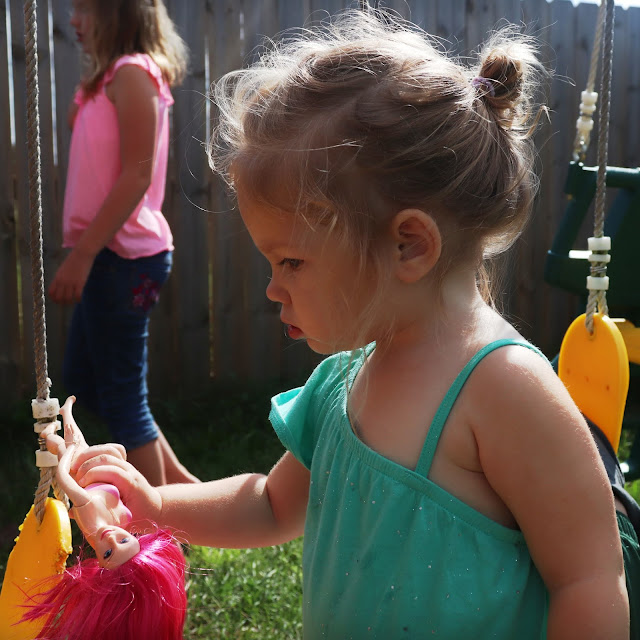 I first heard about the program, which is through our local university, early this year and then I went and read about it online, and then emailed to learn more, which was followed by phone calls and finally a tour to come in and see the facility with Tessie.

After going in I was so impressed with what I saw, that after an evaluation, when we were offered a spot, we enthusiastically accepted.

And that led us to this week. 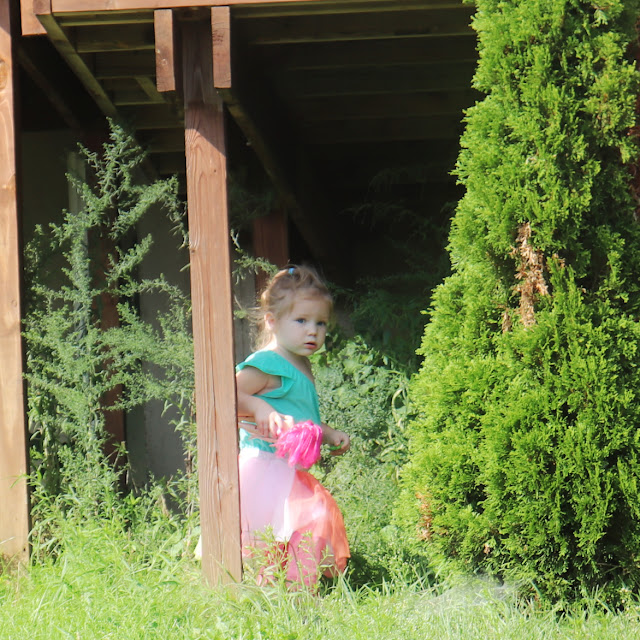 And finally the first day of school arrived.

By the second day Tessie raced down the hallway, not looking back to see if I was there.

By the third day, when Nani and Bopa drove her because I had an appointment with James she said "uh oh, uh oh, uh oh" when they went in a direction down a road that she didn't think that they should be driving down, until they were back on a route that she recognized (I feel like she learned that one from a certain big sister). 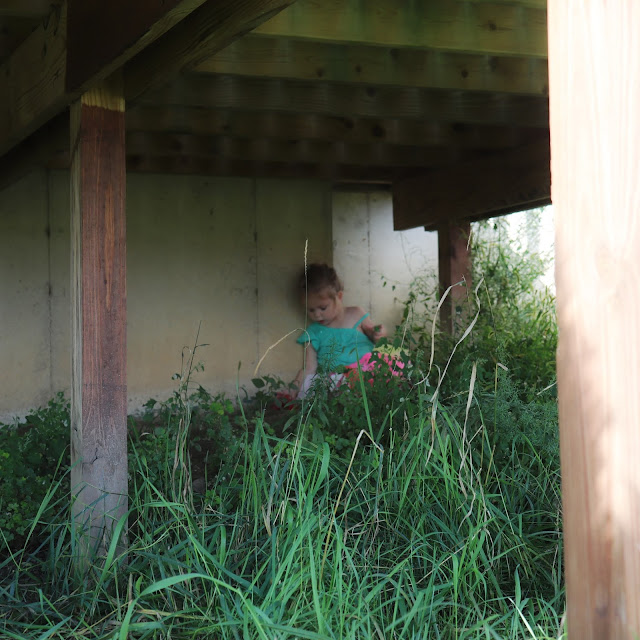 But I was the most surprised by the phone call I got on the first day, when her therapist called to tell me that they just wanted me to know that they were putting her monitor on her and putting her down for a nap on a cot, because she was acting like she was tired.

I'd been certain that she wouldn't take naps at school, because she hardly takes them at home anymore, and has barely napped all summer.

She's certain that if she falls asleep, she's going to miss something exciting.

Sure enough when I picked her up I was told that she'd taken a nap and had woken up refreshed and ready to play.

I couldn't believe she'd gone to sleep somewhere other than our house. She won't even fall asleep when it's nap time at Nani and Bopa's house! 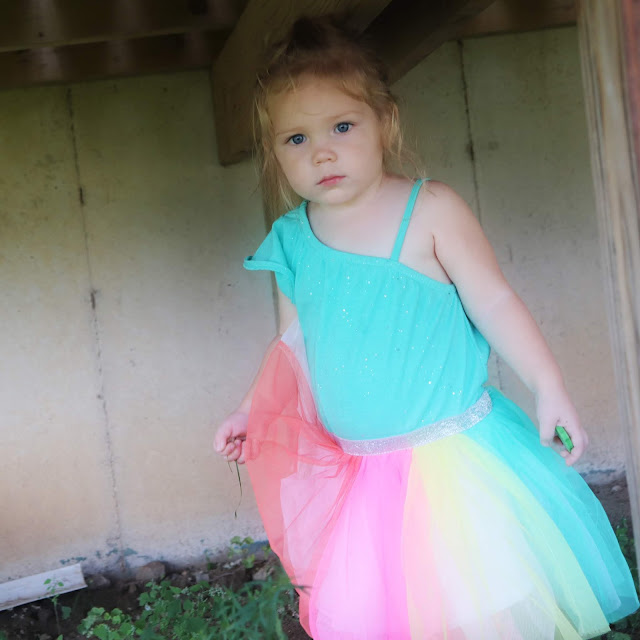 Yesterday I stopped by her school early for a meeting during school hours with all the other parents, to meet all the staff that we hadn't yet met.

Tessie was in a mood, a tech explained as I heard her come hollering loudly down a hallway in a herd of children.

There were two reasons, her therapist told me with a reassuring smile.

The first was that she wanted to be carried everywhere and they were asking her two walk like a big girl. She was not happy about that development.

The second was that if she was going to lay down to take a nap they asked that she lay down on her cot, not in the middle of the classroom where the other kids were working. Or she could go to the play area to play and do whatever she wanted over there.

She was so furious that she stormed past me when I bent right next to her and said hello and didn't notice me until I leaned over and kissed her on the cheek after she'd settled down at a table and had started playing with some Duplo blocks and a tiny doll.

Then she looked up, shocked, and smiled and then pushed her forehead up against my face so that I could kiss her a second time.

And then when we left she made it exceedingly clear that she still expected to be carried.

Because at home she's definitely still the littlest and she's not quiet ready to just hold my hand and walk next to me like the big kids. 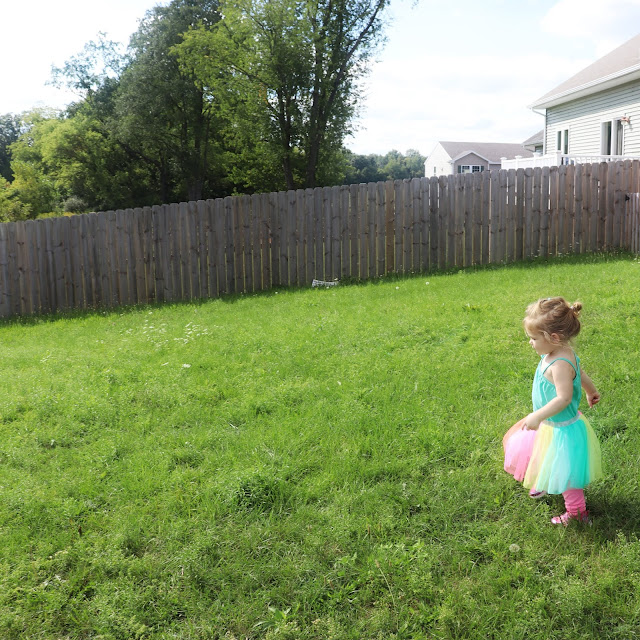 The best part of her morning, on her last day of the week, was when she got dressed.

As I slipped one of her new dresses over her head I told her that she looked like a princess.

She was absolutely delighted.

She is definitely following in the footsteps of her two older sisters in that regard. 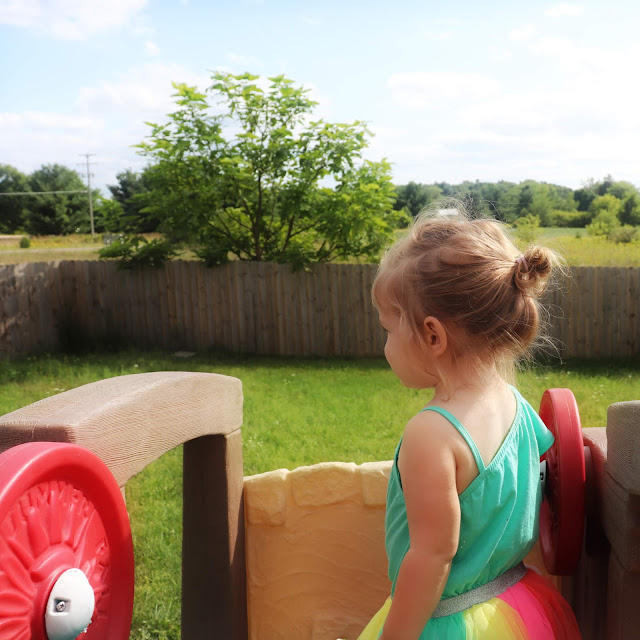 And once she came home from school, without so much as a nap in the car, she was ready to go outside in the backyard, and run wild with the two boys, and Sadie. 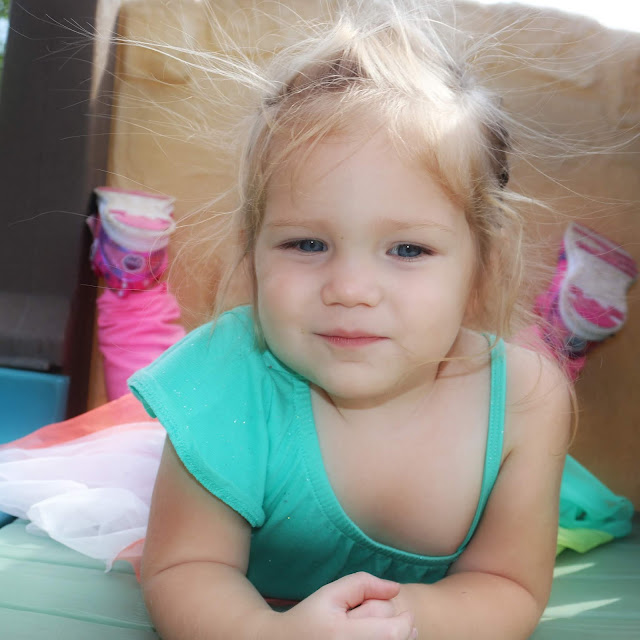 And then she slipped quietly inside with Sadie and I found her fast asleep next to the couch, still wrapped in a rainbow of tulle, completely worn out from a wonderful, busy week.

The high point for me came midway through the week and I wanted to write it down before I forget.

On Wednesday when I was picking her up I paused to speak with her tech and Tessie fought to get down out of my arms.

She could see her siblings about fifty feet away on the school playground.

So I put her down. And I watched as she raced over to them.

Halfway there she stopped and turned and looked back at me. Then she turned back around and ran over to where they were playing and joined them and when she reached them she turned a second time and checked to make sure that I was still there. 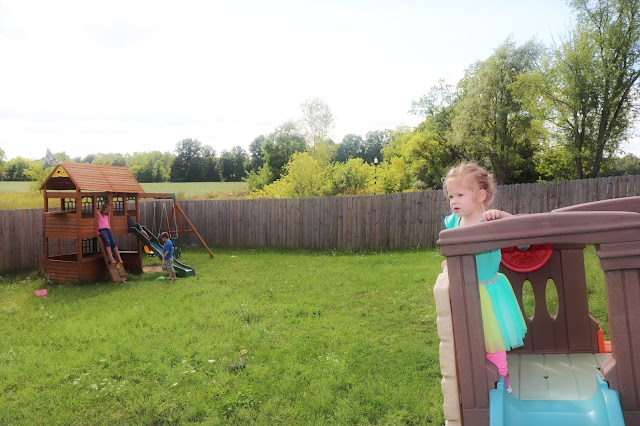 I'm really hoping that this is a sign that she isn't going to be a runner and that maybe eloping won't be here thing.

Maggie never turned and looked and never checked to see if I was still there, she would just run and run and run (at that age I think she would have blown right past the kids playing).

So here's hoping that all these security measure we've put in place are only for one little runner and not two.

And now for a couple school related videos of my not so big girl: