A Neurology Appointment and a Diagnosis 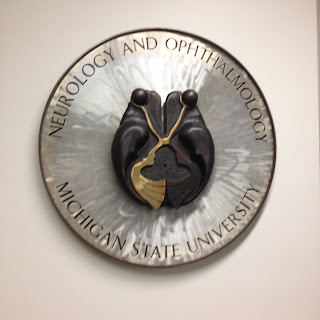 This morning Maggie and I had to be over at the University by 7:30 and so we were driving across campus as the sun was coming up, blinding us with its bright orange light as we made our way east.

One of her therapists met us in front of the neurology building and after completing a huge amount of paper work that I never would have managed without her help (which is to say, with Maggie on my own), we sat down to wait, while Maggie told us the names of different types of fruit and pretended to feed them to her doll.

We were called back and spent about forty five minutes giving two residents a complete rundown of her medical history.  I brought up anything that might possibly be relevant, and the phrase "I don't know if this has anything to do with it but..." must have come out of my mouth a half dozen times.

At some point I told them that a little over a year ago she'd started pointing at lights and saying "no rainbow, no rainbow" in the most surprised of voices, so I suspected that sometimes she saw rainbows around lights and how she's only recently been willing to look directly at any sort of screen instead of always viewing them from the side.

I explained how sometimes, lately, this most coordinated child of mine has been exceptionally clumsy, and how my champion sleeper, who needs 12 hours every night, is suddenly exhausted and now sleeping. 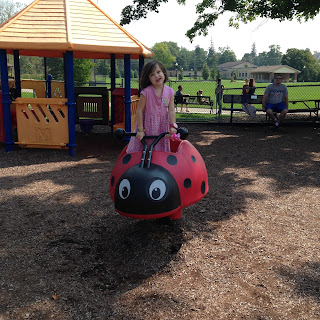 After we went over everything and he examined her, he announced a diagnosis, and it was a very, very long name that I instantly forgot.

But it basically means that he thinks she's having lots of migraines, and her pupils are different sizes during them, and that the effects of those migraines, the auras (the "rainbows") are there even when she isn't actively having a headache.

Around this time I realized that it was around a year ago that I'd stopped giving her magnesium (which she'd been taking to help with her gut issues, which seriously improved around that time) and I also mentioned the fact that she seems to feel much, much better on those rare occasions when I let her have a little glass of Coke as a treat.

It's the only caffeinated drink I've been able to convince her to take and after more discussion and questions about his effects he suggested I let her have a small glass each morning, since it seems to have a major calming effect on her and she seems to feel much, much better after having it.  And he suggested I start giving her the magnesium like I was before, while waiting to get in to see the regular neurologist who she'll be seeing to help manage the migraines.

It was kind of funny because while I could clearly see that drinking Coke helps her I was still hesitant to give it to her regularly because, well, it's Coke.  But after answering a series of questions I had to admit that she doesn't seem to have any negative side effects when she has it and it seems to make her feel significantly better and calmer, so it likely is a good tool to use in small amounts while we figure out what's going to help these headaches go away.

This is good news, because we have an idea of what's going on that answers all the concerns I had and we can help her now.  But it also makes me feel kind of terrible because it seems like it's likely she's been in pain for quite a while now, and I had no idea what was going on.  The more frequent meltdowns all summer were likely migraines and she had no words to communicate how she was feeling to us.

I keep remembering the day a few weeks ago when both her pupils were totally dilated and she came over to me with a blanket over her head and I asked her if she had a headache and she burst into tears and I had the sudden feeling that it was because I understood her and she was relieved.  It breaks my heart that it took so long to understand what was going on, but it's such a relief too, because hopefully we can get these under control now.

Thank you to everyone for the prayers and answers to the questions I've asked and suggestions!  We'll be going back in two and a half weeks to see the other pediatric neurologist and hopefully begin to get this out of control.
Posted by Cammie Diane at 11:27 AM