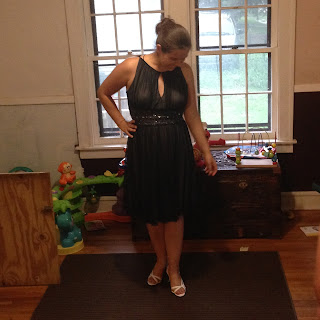 We'd marched, with all three kids, through JCPenny's and Younkers, searching for dresses yesterday afternoon.  I had yet to see a single 6X dress, the size that Maggie wears, in either store and moral was running low.

Sadie and I both had dresses now, tucked under my arm as I attempted to maneuver Maggie through the mall, her long legs slipping past the foot rest on the bottom of the umbrella stroller, so that every few minutes I would stop and ask her to lift them back up and she would, most of the time, for approximately five seconds before we repeated the entire scenario again.

When Paul suggested we stop at TJ Maxx I was skeptical.  I mean, TJ Maxx and Ross are both stores that we've frequented many times over the years, but I was ready to be out of the mall and didn't think they would have any of the sparkly party dresses that I was searching for, for the girls to wear to my sister's upcoming wedding.

Still I shrugged and followed him into the store, and while he took the double umbrella stroller over towards the men's section I wove back and forth between racks until we were in the girl's section at the very back of the store. 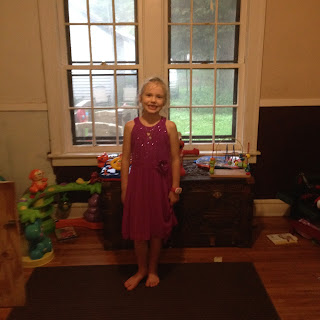 There wasn't a single puffy dress.  There were a few tight, thick knit dresses, but nothing that I knew I'd be able to convince Maggie to wear.

Turning I walked back towards men's clothes to tell Paul that there wasn't a single party dress in the store and that's when I saw them.

This past winter I had stumbled from store to store through a different mall, looking for a Christmas dress for Maggie.  We had found it, in a section of Younkers thick with Frozen inspired dresses.  She'd grabbed the dress, momentarily distracted from her interest in the shining white floor, her face lighting up.

It was the first time she'd ever expressed interest in any sort of clothing in a store and so we bought it immediately.

I still wasn't sure if she'd actually wear it, since she seldom wants to wear anything that isn't pink, and red is usually her second choice, but a few days later I held it out for her and she put it on and after that I would have to sneak the dress away to wash it, until finally it was in tatters after months of being worn every single time it was clean. 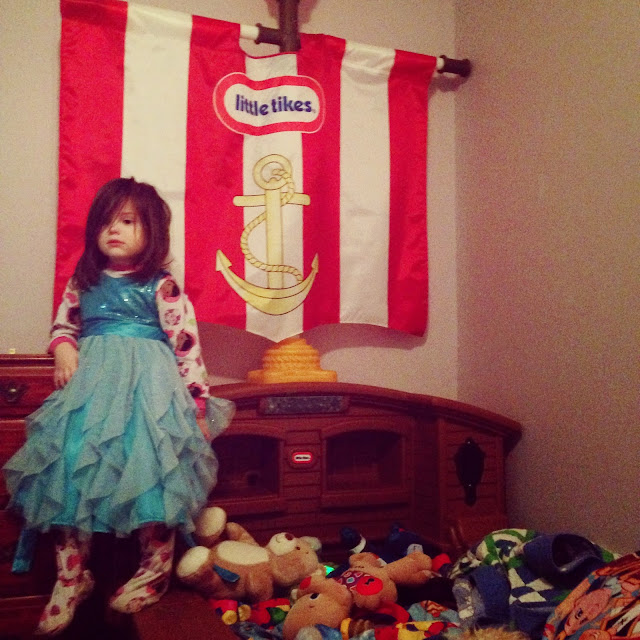 Then she lost interest.  Maggie's very particular about her dresses and once they cross a certain point of raggedy-ness she (thankfully) abandons them.

I'd joked with my mom a few months ago that I wish I'd known how much she would love it, because I would have bought at least three.

And there they were, in an aisle in TJ Maxx, marked down to $25.  There was one 6x and one 7/8 and I grabbed them both and held them up, victorious, as I caught Paul's eye.

They're hidden away now until the wedding, which is less than a month away, when I'll break out the like new dress to surprise her.

I can hardly wait to see her little face when she sees her favorite dress like new again!
Posted by Cammie Diane at 7:25 AM