On Toddler Bickering and Peace 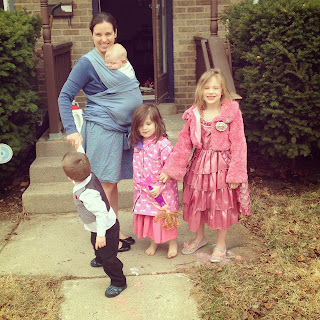 I made it seven years as a mother with virtually no children fighting.  That time has ended now, but I'm still shocked that it lasted as long as it did.

I know, it's basically unbelievable.

I sometimes have thought that it's a perk of the specific challenges that our family has faced.  For whatever reasons, with Sadie's temperament and Mae's personality, they just didn't/don't fight.
Therapists and social workers have come to the house and commented on how odd it is.  I'd like to claim that it's something that I've done, but I know it's not.

It's not as though our house is either silent or peaceful.  My children are like a small herd of elephants trampling from one side of the house to the other.  Something breaks almost everyday.  Sometimes it's furniture.  "Can you brace that with a straight brace and an L-bracket" are words my husband frequently hears.  We just installed triple locks on the kitchen baby gate and it took Maggie less than 24 hours to figure them all out.  And I say "please don't jump on the couch" about fifty time a day.

But fighting just wasn't their thing.

And up until now there's this weird thing that has happened.  When Sadie was small and Maggie wanted a toy, Sadie would let Maggie have it.  Then Patch came along and when he was tiny and he was insisting that a toy was his, both girls would immediately hand the toy over.

I'd watch and think that this was truly too good to be true as each two year old suddenly stunned me by proving that they actually could share.

But it lasted for longer than I could have hoped.  Even our two year olds were ridiculously enchanted by every baby they come across. 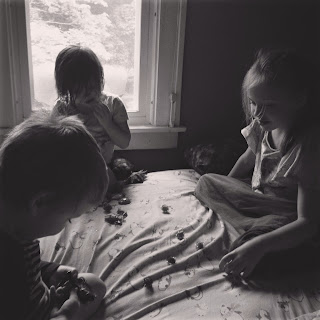 Then James came along and has, of late, reached the stage where he's turned into a little tyrant.  He sees someone else playing with a toy, any toy, and he wants it.  He zooms across the room and grabs it from one of his older siblings hands.

And... they let him have it.  Even Patch joins in, while saying "Buddy!" with a little laugh.

But the fighting, which surely couldn't stay away for ever, has arrived in the form of Patch and Maggie and their daily battles.

Someone is always touching someone's arm.  One of them just pinched the other one.  Maggie wants the light in the playroom on and Patch wants to turn it off and on and off again.  Patch tripped and fell and is crying too loud.

He's no longer little enough that she thinks every sound he makes is adorable.

They don't fight all the time (unless we're in Mass... then it's just about all the time), but they definitely go through half hour stretched where they go around the house constantly annoying the daylights out of one another.  And as annoying as it can be, it also kind of amazes me because this has to be a developmental stage, doesn't it?  It feels like it is.

Still, Patch and Maggie are exceptionally close.  As Patch has hit language milestones, Maggie often follows just a step behind, beginning to use words and phrases just as Patch starts using them.  Developmentally she's following close behind him in many ways and sometimes I feel like this might be kind of what it's like to have two year old twins.

For all their fighting though, they're also rather inseparable.  When Maggie goes to therapy Patch frets about where she is.

And then there he and I had this conversation as I was getting the kids ready for Mass this past Sunday. 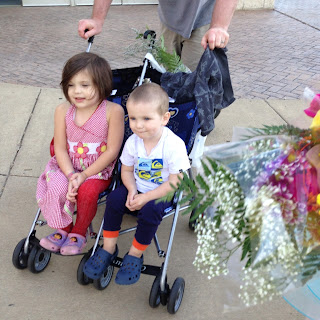 I glanced over at Maggie who was playing happily. She appeared to be perfectly fine.

Patch had been sick earlier in the week, but everyone had been healthy for at least three days.
I didn't think too much of it until I came out of the store from running in to pick up a few things a few hours later and Paul told me that Maggie had in fact gotten sick.  Patch had been right.  There'd been no obvious signs that I could see while I spent the morning with her, but he had seen something that I didn't.

I guess I have to put a little more stock in Patch's Maggie observations.  For all their arguing they are exceptionally close and he seems to have some extra insight on what's going on with her, that even I don't see.
Posted by Cammie Diane at 6:43 AM