The CD of the MRI

While we were in the hospital the doctors really wanted to be able to see Tessie's brain stem.  That region of the brain controls breathing and since no breathing was the biggest problem that she was facing, making sure that part of her brain was normal was a big deal.

Thankfully she had recently had an MRI, without sedation,on our trip to Missouri.

I called and spoke with the contact person for the study and she explained that the doctor who could release the CD was out of the country, but they had an urgent call in to him and were waiting to hear back.

Many times the necessity of having another MRI done was discussed.  It would start with various doctors who'd come to examine Tessie explaining to me that it was likely that the images from a research study wouldn't be as well done as the ones they would need and so we would have to do it over again.  I would nod.  Then they would say, "but putting a baby with central apnea under general anesthesia can be very dangerous.  Because of the breathing."

Because she might stop breathing, my brain would fill in. 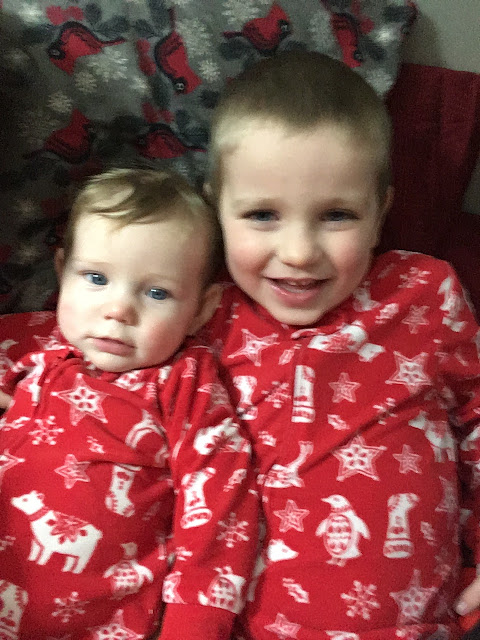 "So we can wait for the CD and see what it says." was the conclusion reached over and over again.  As long as she continued to do well, we could wait. 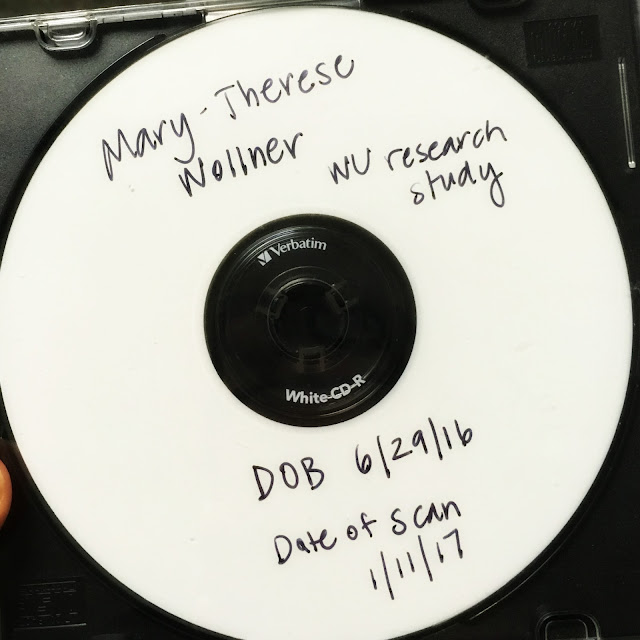 I'd gotten a phone call from her neurologist's office asking me to bring it in the moment I got it and ask for K-.  K would take the CD and make a copy and then I could keep the original in case any of her other doctors wanted to see it.

The minute we got it I loaded the kids in the car and headed to the neurology office, stopping to pick up Paul on the way.

I'm not sure why what happened next was so amusing to me, because on another day I think I would have been frustrated.  Maybe because it feels like we've been through a lot and so it seemed fitting that dropping off the CD wouldn't be as simple as it probably should have been.

Here's what happened next.

Me: "Hi.  Is K- here?"
Receptionist: "K?"
Me:  "Um... K, Dr. D's... person?  She called and said to bring this in and ask for her so that she can make a copy of it?"
Receptionist:  "Oh!  K.  I'm not sure we can make a copy.  Let's see. She was supposed to go home early today but let me see if she's still here."  (disappears and then reappears a few minutes later)  "Okay, so here's what we'll have you do.  I'm going to point you in the direction of radiology.  You take that down to them and they are going to scan it and upload it to the system so that he can see it right away."

Five minutes later having traveled down to radiology and waited in line.

Me:  "Hi, neurology just sent me down here.  We have this MRI for my daughter and they said that you guys would scan it in so that the doctor could see it."
Receptionist (makes phone call and repeats what I just said, says "okay, thanks." and hangs up the phone:  "Actually we can't do that.  It's actually in violation of HIPAA law. If she'd already had a scan here we would be able to do it.  But she hasn't.  Even though she's in the computer.  So we can't do it."
Me:  "Yeah... she's in the computer because she was in the PICU last week.  They couldn't do an MRI because she might have central apnea and they were afraid she would stop breathing under sedation.  But we have this one which was done as part of a study not under sedation. It took two nights to get..."
Receptionist: "Sorry."
Me:  "Thanks anyways."

Me:  "So.... radiology says scanning this is a HIPAA violation."
Receptionist:  "I was just on the phone with them before I sent you down!  They told me they would do it!"
Me:  "I think maybe I didn't talk to the same person you did.  So how about I leave this here with you?"
Receptionist:  "And I'll make sure the doctor sees it and we'll mail it back to you once we get it scanned."

And there you have it.  Getting it wasn't easy and getting it to the doctor was more difficult than I imagined but it kind of fits with the way things have gone (twists and turns and then ultimately working out) and I am relieved to have put that thing in their hands.  And I'm relieved that I did not have all five kids with me while I tried to figure out where it went.

And I'm really thankful to everyone from the doctors to the receptionist at her neurologist's office who made it work so that they hopefully will be able to use this CD since it's what everyone thinks is best for her if there's any way that it can work out.

Now I'll be over here praying that that CD looks entirely normal and that I get that call soon!
Posted by Cammie Diane at 8:11 AM