I'd like to believe that we can believe different things and still believe that we all want what's best for our country. Instead, in the last few days, I've seen friends make each other out to be villains and I realize that by writing this post I've opened myself up to all sorts of criticism, along with readers who will click away and not come back.

I let it sit all night, remembering the "I'm so disappointed in you" message that popped up in my inbox an hour after I wrote that post about deciding to wear pants again and wondering what kind of backlash would follow.

In the end though I want to be honest with you. I want to use my little corner of the internet to explain why yesterday's March was important.

And if that's a deal breaker for some readers, I understand. But I've always shared quite a bit with you here and I don't think I'm ready to stop now just because it may make a number of people angry.  If I'm going to be a coward here, afraid to write what I really think, than I need to stop writing altogether and be done with it.

Before I start, a number of people online yesterday seemed to believe that the women at the March were actually showing up with knitted hats that were supposed to look like female anatomy because they were named after that word that our President so crudely used. Yes, the hats were crudely named. But they were made to look like cat ears.

And if you have a bigger problem with women wearing cat ear hats than you do with the President gleefully discussing grabbing women by that same body part, you may want to think about that for a while and ask yourself why the one was excusable and the other is causing indignation and hatred. 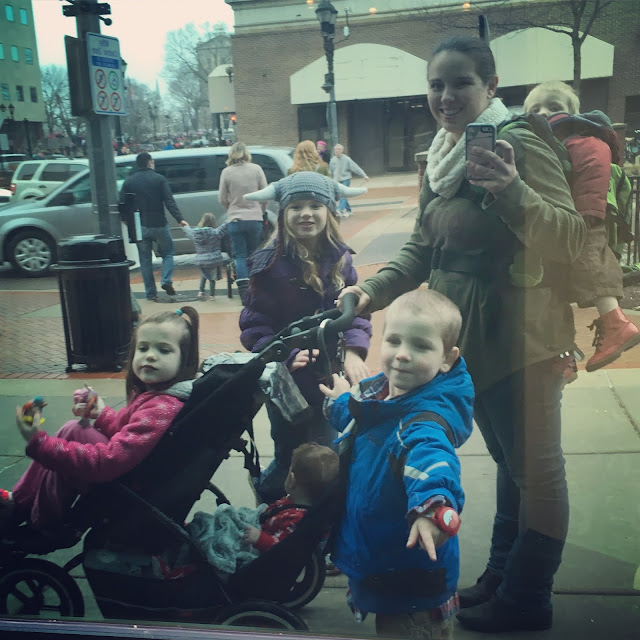 Today I saw quite a few people talking about the Woman's March that was taking place in Washington D.C. and about the Sister Marches that were taking place around the world.

There had been a stir earlier this week in the prolife world when New Wave Feminists, who was a partner in the march, was told that they were no longer welcome in the march because of their prolife beliefs.

Now to be honest, upon hearing this news I did pause.  I wasn't entirely certain I was going to the march to begin with.  I knew that if I went it would be me and the five kids, and the very idea was exhausting.

In the end I thought of the issues that are important to me and I made my decision.

I am and will always be completely against abortion.  The issue is incredibly important to me.

So is the issue of violence against women. 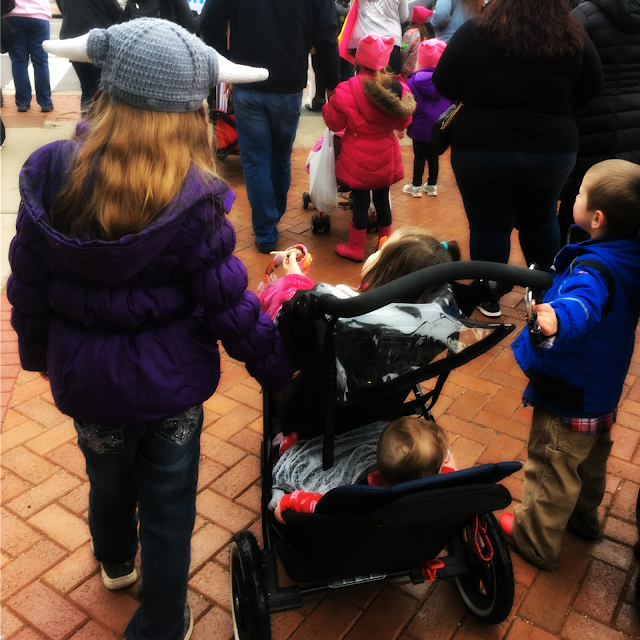 In the past year I've seen too many conversations where victims of violence, particularly of sexual violence, were blamed for the crimes perpetrated against them.  But what was she wearing? But where was she walking? Should she have really gone to that party in the first place? were questions I saw bandied about more frequently than I would have ever imagined.

Or maybe they're exactly what I have imagined.  It's not the first time I've heard those same lines.

They're why women don't come forward and don't report these crimes.  Because these questions are as common as the accusations that ripple just barely below the surface of the callously phrased words.
Quite a few friends today have asked why we even need a woman's march.  It's totally unnecessary because women are totally and completely equal, they say.

If you believe that I hope you stop and give a little prayer of thanksgiving that your experience in life has allowed you to maintain that belief.  Because in a society where violence against women is as common and as easily dismissed as it often is in ours, we can't be truly equal or truly free. 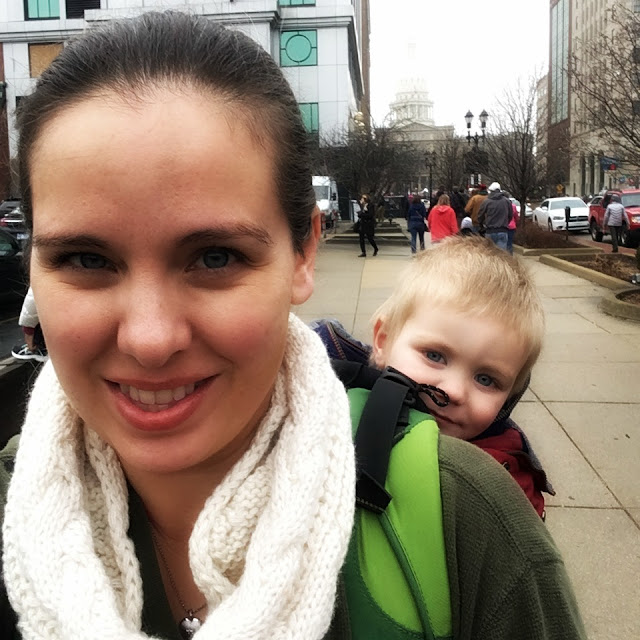 This is a deeply personal issue to me.

I know that a few times over the years I've mentioned that one time the boy who I'd been talking with every night on the phone for months (although I guess officially he wasn't my boyfriend) slapped me upside the head then hit me across the back with a two by four, then bragged about it to his buddies at football practice the next day.  That wasn't my last experience with violence, unfortunately, or even the worst, but it was a particular moment that eighteen years later is still seared into my memory.

So perhaps it isn't surprising that I was horrified when I first watched the tape where our now president bragged about how he can grab women and do whatever he wants to with them.

I winced when I heard people dismiss it as "locker room talk,"

I felt faintly ill when I heard people say that "all men talk like that."

No, that isn't true.  And even it were it wouldn't be an excuse.

Perhaps I shouldn't even get started on the topic that I'm the most passionate about these days: disabilities.

I sat in the PICU this last week watching CSPAN and staring at the oxygen monitor above Tessie's bed.  I watched the woman who will likely be the future Secretary of Education as she bumbled her way through the hearing, fairly reeking of incompetence.

I heard her say, when asked about disabled children attending public schools, that she thought that was a decision best left up to the states.  When she was corrected and informed that IDEAS is in fact a federal law she said that she must have been confused.

I have watched our now President flail about mocking a disabled reporter.  I've been told that I can't believe my own eyes, that it's just the liberal media telling me what to think, that he wasn't really mocking him when using the movements that are stereotypically used to mock the differently-abled.

And if you believe that I've got a bridge I'd like to sell you. 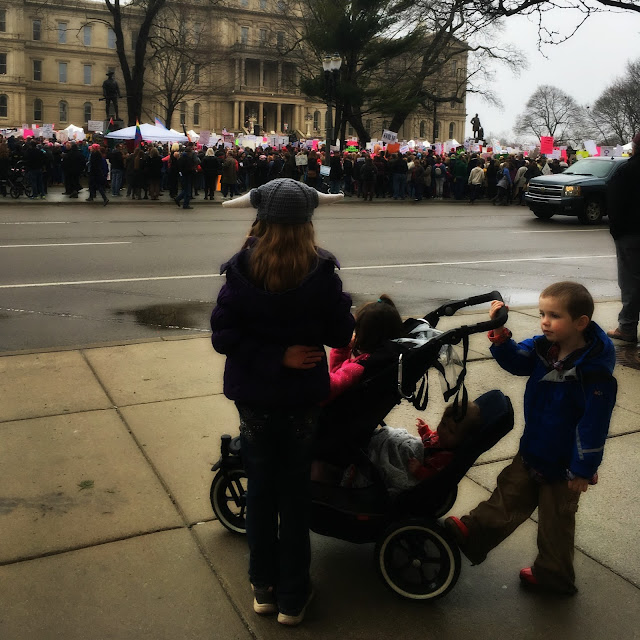 Between the current Secretary of Education pick and the Attorney General pick (he spoke against IDEAS long ago), and Trump's own behavior, as the mother of a child with a disability I have serious concerns about the future my child will face.

And yes, I've been told I have nothing to worry about, and that my worries aren't valid, and even that "no one would argue that kids with disabilities can't go to public schools" which was bestowed upon me by someone with no experience with disabilities of any sort.

But as I gear up to use this law to ensure Maggie does get to go to school next year, after having a conversation with a special education director who told me "we have absolutely nothing for her" followed by the remainder of last year's school year not returning my calls, I can confidently say that these laws exist for a reason.

The horror stories of the past are not so far removed that they've been forgotten.

All of this was in my mind when I thought about marching.

And then I thought about my daughters.  Someday Sadie will be old enough to understand the things that our current president has said about women.  They're out there in the world, along with whatever else he says in the future, and it will be recorded for posterity.

I want her to remember that when these things were being said and accepted by many people in our nation as normal her mother spoke out and said that it was unacceptable.

So we trekked into town and walked for fifteen minutes after parking as close as we possibly could to listen to the speakers and to stand beside others who feel that they have something to say that needs to be heard.

There were people carrying signs about race, and about the environment, about healthcare, about the glass ceiling, and yes, even about abortion.

I didn't agree with every person there today.  Sadie and I had a long discussion about that fact.

I didn't agree with some of the organizers.  But I wasn't going to let someone else dictate to me what it means to march for basic human rights. 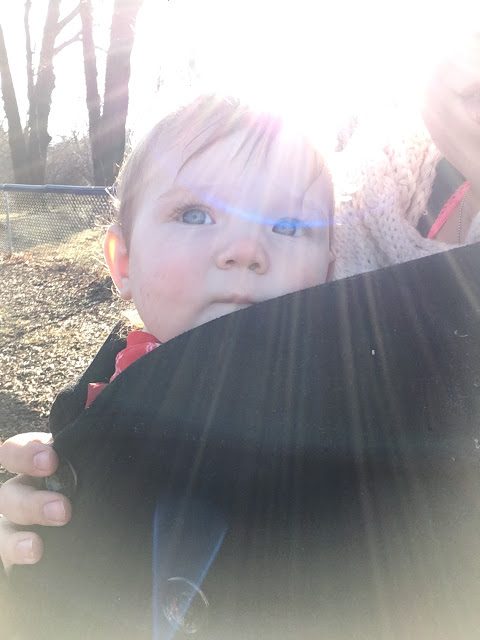 I am prolife.  I am pro woman.  And I feel increasingly that neither party is particularly interested in basic human rights from conception to death, beyond using issues of life and death to command votes.

I wish that there was a party that represented what I believe in.  But right now there isn't.  And that is another reason why I march.

I'm going to keep praying for him and for our nation.