We made it to Boston and I nervously bundled Tessie into the car, relieved that Maggie had been calm all morning long so Paul would be able to make the drive with us into the city.

He was totally calm.  I was a bundle of nerves.

"We know what they're going to say, right?  This isn't a surprise.  We've known for a long time.  This isn't news." was his calming advice all the way there, as I chattered about being nervous, jittery and impatient now that we were so close to officially being told what I'd suspected for a very long time. 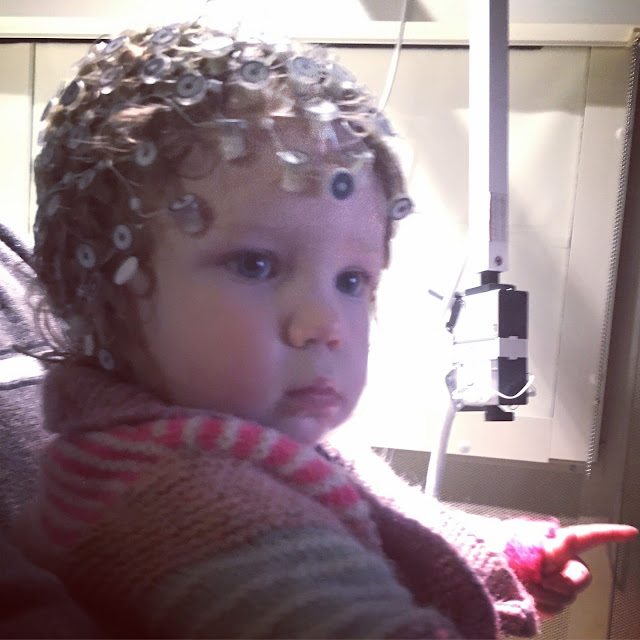 We arrived an hour early and grabbed lunch at the bagel place near the Cognitive Neuroscience Lab and then it was time.

Tessie was not a fan of the EEG cap this time around (she is not a fan of hats in general) but after being bribed with a slew of animal cookies, bubbles, and the Curious George movie on TV she relented and sat still.

After that we went into another room, across the hall.

First they did an ADOS. 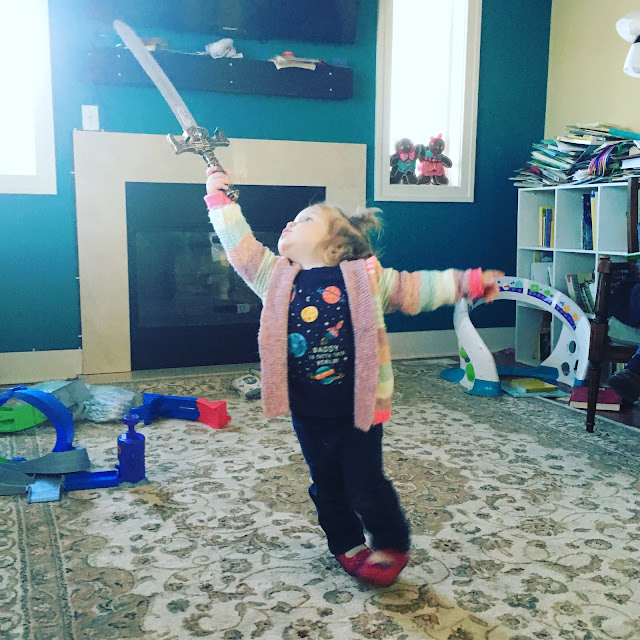 The ADOS is basically done where the test administrator plays with the child, or in Tessie's case attempts to play with the child.  Tessie used her rather considerable willpower to ignore Ms. L, and wander around the room, testing out the baby gate that led to the hallway, and refusing to give the baby doll a bath, make the frog jump, or look cast a glance at the board book.

When the tests were done we sat and went over the results.

Tessie qualifies as having autism according to the test results, although the study doesn't offer official diagnoses.

We'll receive the test results in a few days in the mail, on the official university letter head, to give to her doctors. 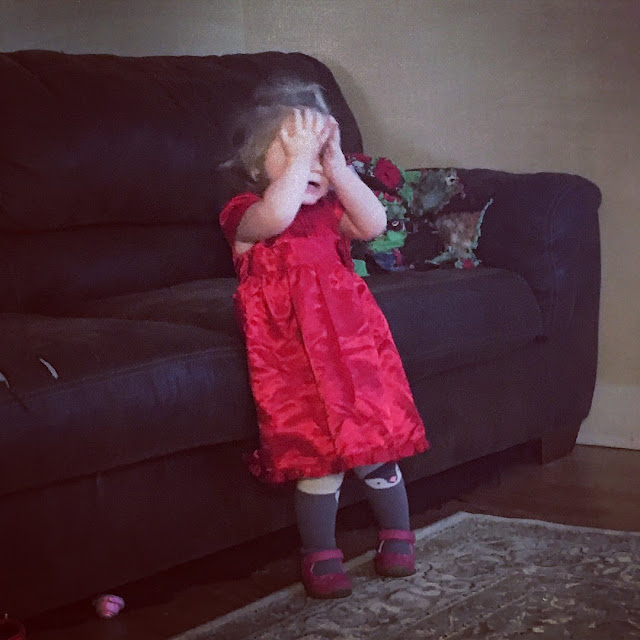 The results will look kind of serious and scary at this point (or so we've been warned), but that's in part because of her lack of interest in the test giver, one of the difficulties in administering these tests to tiny kids on the spectrum, and they told us to remember that Tessie is a happy, easy going baby who does communicate in her own way quite well, even if it is without words.

We talked a bit about Maggie's results, when she was three, on the same test, and how I'd remembered opening a the packet and seeing her scores in the lowest .5% "of kids on the spectrum" and being afraid of what that meant for her future and now she's doing things that I couldn't have imagined back in 2013.  "I imagine it's not unlike that." I said, watching Tessie throw blocks around the room.

The girls have similar verbal skills (looking back to one year old Maggie) and neither one was particularly interested in playing with the toys in a neurotypical way.

So that's where we are now. 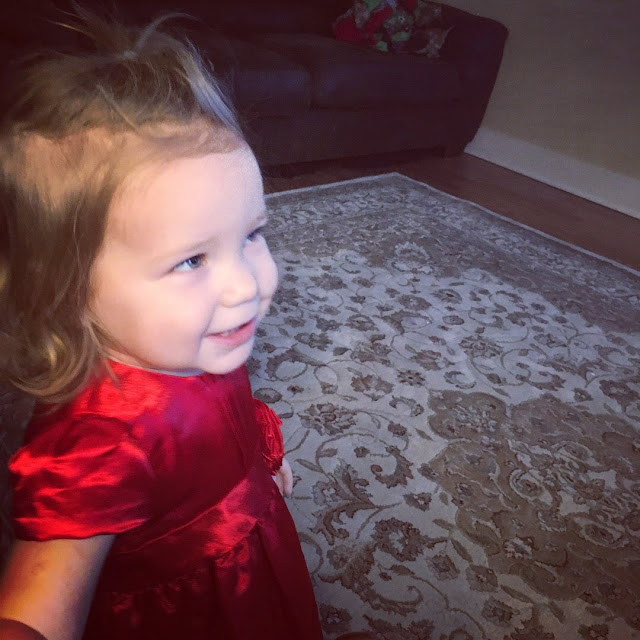 We're eight months away from her appointment for autism testing in Michigan.

We're praying that there are enough cancelations that she can get in sooner, because until she gets seen for that test she will get one hour of week of therapy and that's it.  Which, knowing how important early intervention is, is killing me.

Even with all the trainings I've done, and everything I've learned with Maggie, I'm not even close to be on par (success wise) with the therapy Maggie receives and doing what we do at home her delay has grown from 20% to 40%... it makes me feel physically ill to think of what it will be on August 8th.

The lab strongly recommended we come back for testing at the Developmental Center at Boston Children's.  Paul's going to call our insurance company as soon as the weekend is over the try and get it approved.  I am not optimistic. 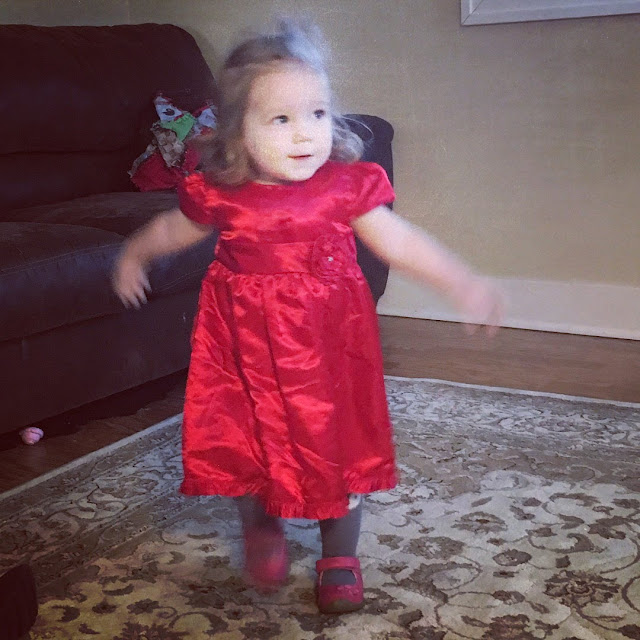 Our last conversations with them have involved them denying Mags' seizure/migraine med last week suddenly (apparently, after years, they suddenly objected to the sweetener in the compound... sigh...), which was ultimately approved, and the denial of Tessie's genetic testing to determined whether or not she needed a tracheostomy and a ventilator when they were still afraid she had CCHS, which they continued to deny testing for (and which the genetic testing company ultimately covered).  So. My faith in them is very small.

I'm going to be making some phone calls and trying to determine how much of a difference going will make, and I'm going to be trying to get a feel for the length of the cancelation list at the moment, and I'm trying to see if they'd allow us to travel inside Michigan for testing at another location (pretty sure the answer is no, but I might as well ask... because if traveling to the UP meant shaving off months I would be in the car like that).

If the insurance says no to the developmental testing the lab recommends I'm not really sure what we'll do.  I guess we're taking it one day at a time right now. 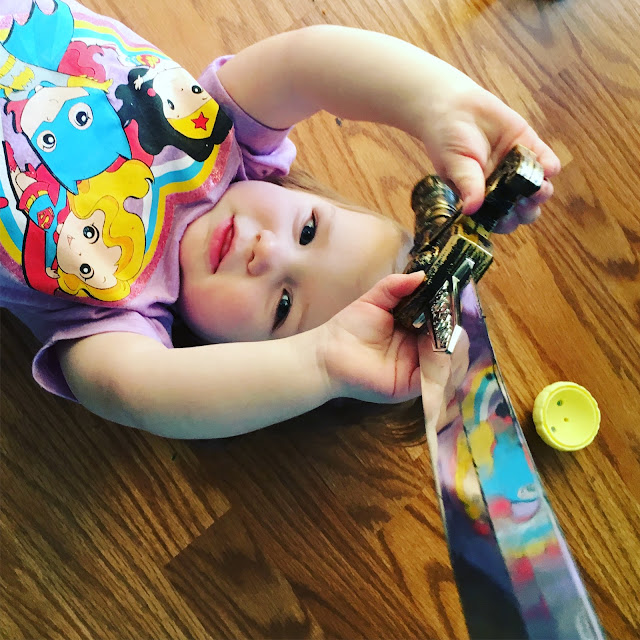 For the moment the most important thing is that our tiny whirlwind princess is happy, and healthy and communicates remarkably well with us and all four of her older brothers and sisters who are only too happy to answer her babbles and rough house with her and keep her out of the trouble that, like a certain older sister, she tends to get into.

And that is the latest.

At least this time we have an idea that the road ahead isn't nearly as scary as we thought the last time we were here.  It's just different.  Challenging, certainly (but everyone has challenges).  I just wish I could get those tests through now.

The waiting is the hardest part.
Posted by Cammie Diane at 11:18 AM