Yesterday was odd and at the end filled with an odd sort of internet drama that I'm almost reluctant to write about.

But I'm going to because I keep coming back to it and to a point that I don't want to forget.

I was tired yesterday.

I'd woken up early for no particular reason and I couldn't sleep because my thoughts were going and wouldn't be stopped and so, because it was five, I got up and got dressed and started the day, my mind on Tessie.

Facebook reminded me of where we had been a year to the day earlier, and so that was on my mind too. 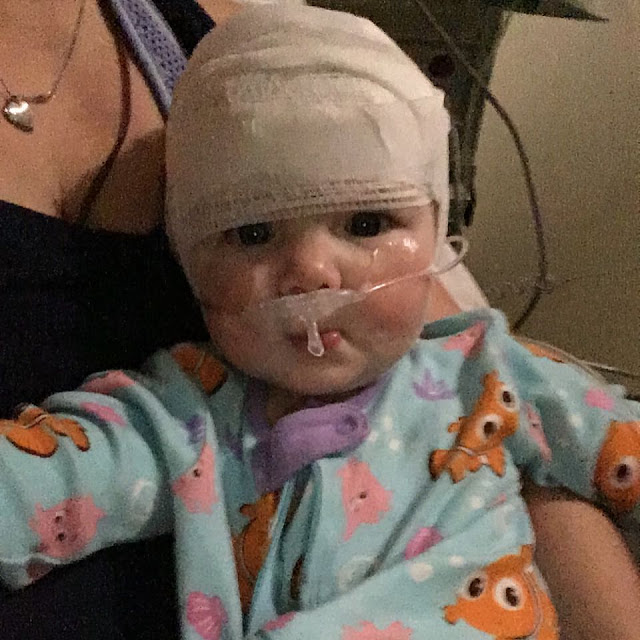 I thought about that day, driving to the hospital and sitting with the doctors who hadn't told me that they'd planned on doing a tracheotomy the moment we walked through the doors (they didn't), as they went over our entire family history, searching for clues and answers and finding very little to go on.

It seemed appropriate that I had just finished editing a video talking about Tessie's story, the words spilling out with surprising ease and so I put a few finishing touches on it and shared the finished product before going on with my day.


I got the kids up and ready, and onto their respective buses, then went about the house, doing laundry, cleaning, and wishing that it wasn't quite so cold.

And I worried.  It's been a worrisome sort of week.

If they do either of these things it will be nothing short of a miracle.  These things don't happen.  They just don't.

And I'm almost afraid to believe or even to hope, that they're really and truly a possibility, because I don't want to be crushed if nothing happens and we have to wait eight months for her appointment.  Eight months, developmentally, when you're slipping behind more and more, is a very long time.

When the school bus arrived I sighed.

I didn't want to load the little kids up in the car.  I was so tired.  And a certain not entirely reliably potty trained child was insisting that he didn't need training pants, so I felt like disaster was looming as we trudged out into the icy cold, and loaded up the van. 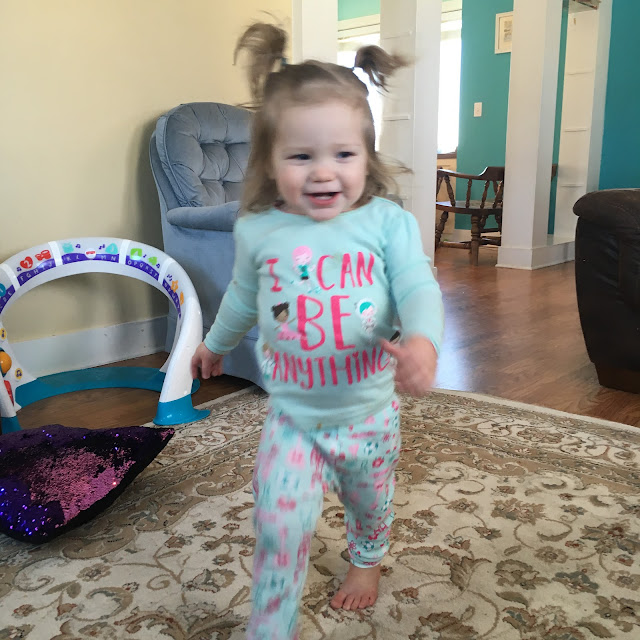 And then we got to gymnastics.

This summer we discovered the gym that three of our five kids go to. We came upon it by chance when Maggie had an appointment with a specialist that wouldn't allow other children in the exam room.  I called, unsuccessfully, all over town.  Then I found them.

The gymnastics gym had a summer camp that would allow one day drop ins, at the last minute, and they saved the day.  And the kids had a blast.

We aren't going to gymnastics because I'm hoping to raise little Olympians.  We're at gymnastics because I have one kid who was in the 2nd percentile for gross motor skills three years ago, who walks across the room and falls over for no particular reason other than the fact that she's inherited her two left feet from her father and I, and a three year old who has officially graduated from PT, but who seems destined to follow in his big sisters footsteps. 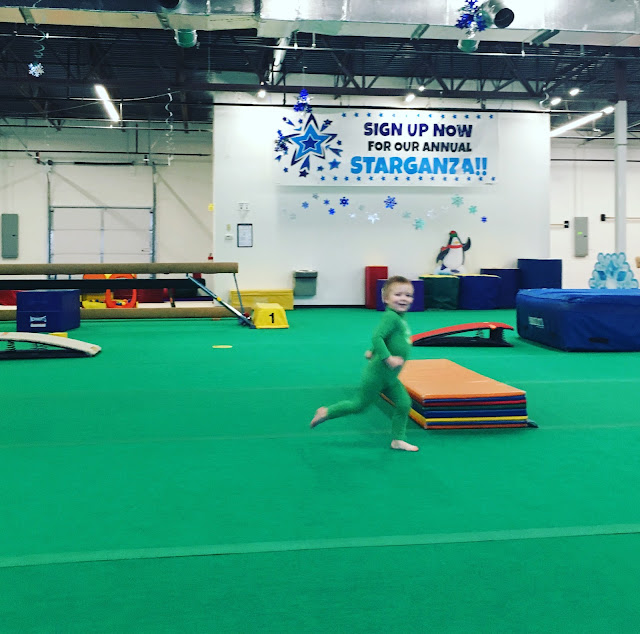 Patrick has somehow managed to escape the clumsy gene and has hoarded all of the coordination that Maggie didn't get, for himself (he accidentally landed a front handspring the other day without meaning to), so he's just along for the ride.

With two minutes left until class started I shuffled three tiny kids into the bathroom, where the potty training rebel proclaimed the potty "yucky" (it wasn't) and refused to try and go, and then began to shout "It's yucky! No! No! Yucky! Yucky!" at the top of his small, loud lungs.

So we embarrassingly shuffled back into the gym, where everyone turned to look at the source of the commotion, and the boys sprinted to their class, while I said a small prayer for dryness (it was answered).

Then Sadie waved.  Her class was starting late.  "Can you take a video of me?" she asked, suddenly shy at the idea.

She pranced back and forth on one of the low balance beams, slowly, carefully.

When she'd first begun, at the end of summer, she had fallen off the taller beam that they use during class over and over and over again. And she'd had to learn to get back up.  That had taken weeks of the beam portion of the class.

And so I watched her, proudly, both before class, and then during her class as she slowly made her way back forth.  She wasn't doing anything fancy.  Her feet didn't leave the beam together.  But sometimes she stood very still, with a look of utmost concentration, and one foot would come up, or she'd lean to touch the bar with her hands, or she'd walk backwards, and these were all things that were impossible three or six months ago when she could hardly stay on the thing.

So I posted a picture on Instagram, mostly so that her grandparents could see the picture.  That is pretty much why I post 99% of my photos. 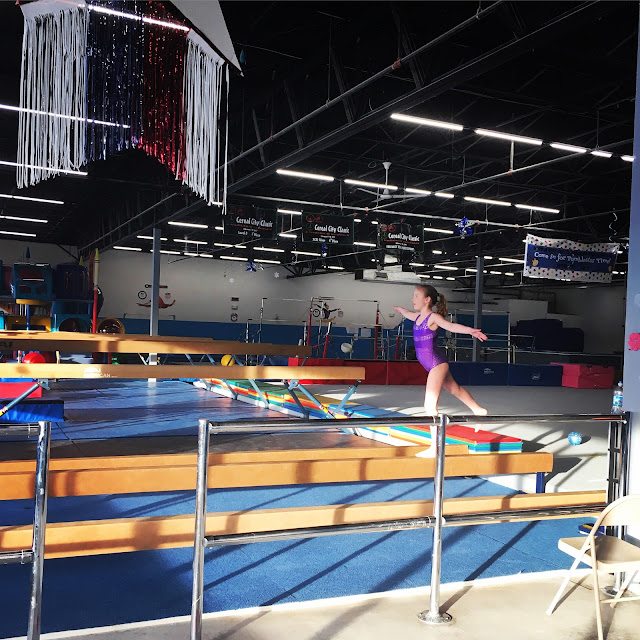 I knew that my mom would see and would remember the class that she attended in fall and would know how hard Sadie had worked for this small, sweet moment.

Paul came by after work, and took over supervising the little kids when they were done with their class, and I ran to do grocery shopping, and met the entire group at home, pulling into the driveway five minutes before them.

After all the food was put away, and dinner was cooked and the kids were fed, and tucked into bed I saw an Instagram alert.  There was a comment.

And that was when I saw that someone had scolded me for posted a photo of gymnastics "today."

Of course I knew what he meant, although I hadn't for a moment thought of it when I posted the photo, and for a split second I wanted to say that here it almost feels like everyday has been "today" for a while now.  And I imagine that it will be "today" for quite a while longer.

We don't have cable.  I don't know what the national news coverage has been like.  I can guess.

But I have watched the story unfold on local online news sites and I've waited for an evil man to face the punishment that he deserves to face here on earth.

And it has been heartbreaking to watch, and realize that one of the boys' favorite people in the world was one of the brave young women standing up, a brave survivor.

And it didn't for a single moment occur to me that someone would take me posting a picture of the kids at gymnastics, which I basically do every Wednesday while I'm sitting there bored for an hour and a half, and twist it into something sick and evil.

Mostly because it was one of a thousand things that was on my mind, and it wasn't near the surface, amid many more pressing concerns and worries.  But also because it wasn't anything sick or evil.

I stopped.  I thought about defending my motivation for the post, about trying to explain that I was just posting a picture of my daughter so her grandmother could see.  I thought about explaining that I've been praying for the survivors, especially those we know who've been personally effected.  And I briefly thought about using stronger language and telling the person to mind their own business because I hadn't had any ill intent at all, and the picture in no way supported the people or organizations that had dropped the ball and screwed up.

In the end I didn't do any of those things.  I blocked the user and deleted his comment.  He had never interacted with me in any way in the past.  If I'd recognized his name, if he'd ever said a kind or respectful word, I would have responded.  But he hadn't.

Once upon a time I tried harder to please everyone.  But those days are long gone.  And if your first comment is an arrogant scolding, or if you appear to be a troll, I'm probably not going to waste my time hitting publish or even reading the entire comment.  There just aren't enough hours in the day anymore and I don't have the energy to pretend. 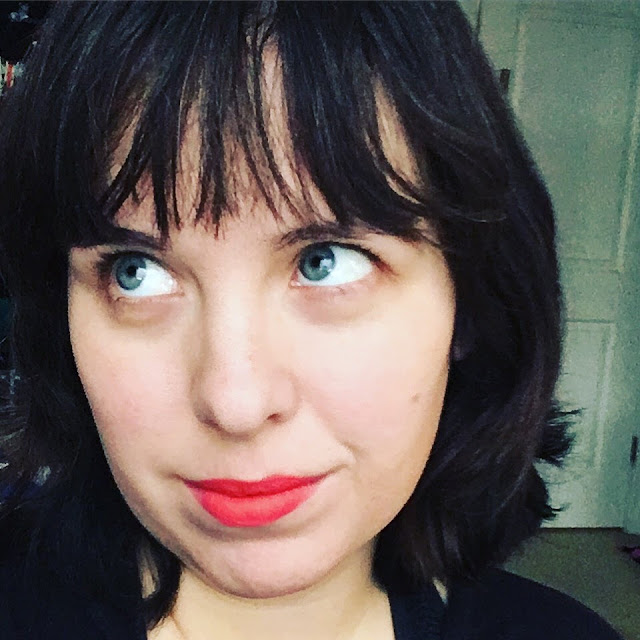 Which brings me to the whole point of this post.

Yesterday someone who follows me was scrolling through my Instagram feed and they saw a photo and made the conscious choice to think the worst of me.  And then they decided that I needed to be scolded (I briefly considered replying "Next time please email your concerns over my behavior to my husband as he is the one to rightfully scold me in this situation" but I feared that the sarcasm would be missed... sigh.).

Maybe, just maybe, we should be a little gentler with each other.  Maybe we can think, hey, everyone is going through something.  Everyone.  This world, it's not an easy place.  This year, it hasn't been an easy year.  For anyone.

Instead of coming out swinging, when that's your impulse, be kind.  Say something nice.  Don't drag the other person down.  Even if makes your feel bigger.  More important.

Because maybe they're a small time blogger who's just posting a picture for their mom to see.  Maybe they spent the weekend driving to Boston for their baby to be diagnosed with autism, and they're potty training another kid, and they slipped and slid in the snow and they're so excited that their daughter can walk across that stupid balance beam and don't ruin it jackass.

But don't even try.  Please?

Because we really shouldn't make life harder for each other, even if we can.  Right?

Disclaimer:  Yes I know.  I could have ignored this little internet obnoxiousness.  I very nearly did. But I've seen so much of it lately.  Maybe it's winter and the cold.  But too often in the land of the interwebs it feels like there are people looking to take things the wrong way.  And that's why I wanted to take this opportunity to use this example to say this.  Give people the benefit of the doubt.  Just... be kind.
Posted by Cammie Diane at 3:01 PM