7 Quick Takes: On frogs and squeals 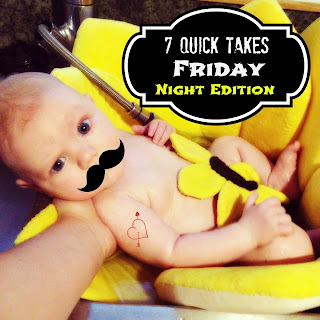 
I already asked this question on Facebook, but I thought I would ask it again here, because I'll take all the suggestions I can get!

Do you have a favorite podcast that you listen to that you'd like to share?  I've been looking for podcasts to listen to while I'm outside watching the kids play in the pool and I have a few I'm subscribing to now, but would love more suggestions!

He's still pretty floppy (his torso though, not his neck anymore, thankfully!).  He can't sit up on his own or in a high chair or shopping cart quite yet.

But he has mastered a sort of rolling/scooting movement on his stomach and he was using it to get all over the living room.  He went from one side to the other and was trying to pull open cupboards and get into anything he could reach.

I have a feeling he's going to be crawling before we know it! 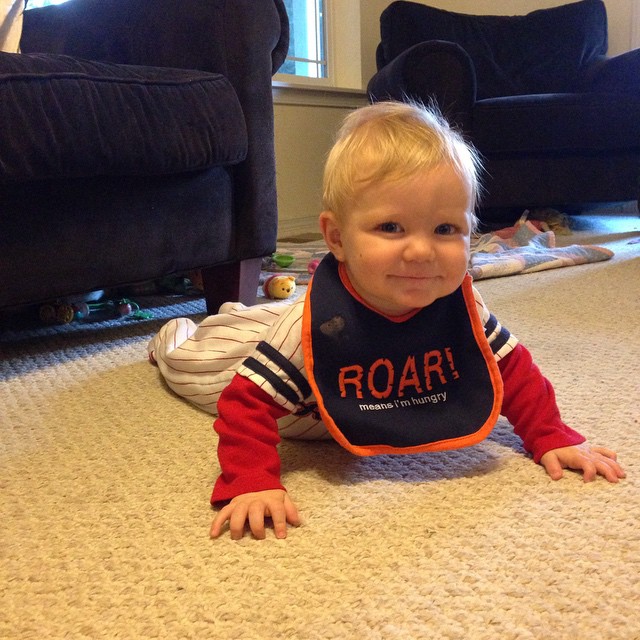 Today however, topped yesterday's rolling from place to place (at least in James' mind, I think).

As the temperature climbed up to 106, the kids wanted to head back outside.  I agreed, but after having James out for a few minutes I dipped his feet into the water (on other days he hasn't thought this was a great idea), when he didn't mind I put his legs in.  And pretty soon both of us were in the pool escaping the heat: 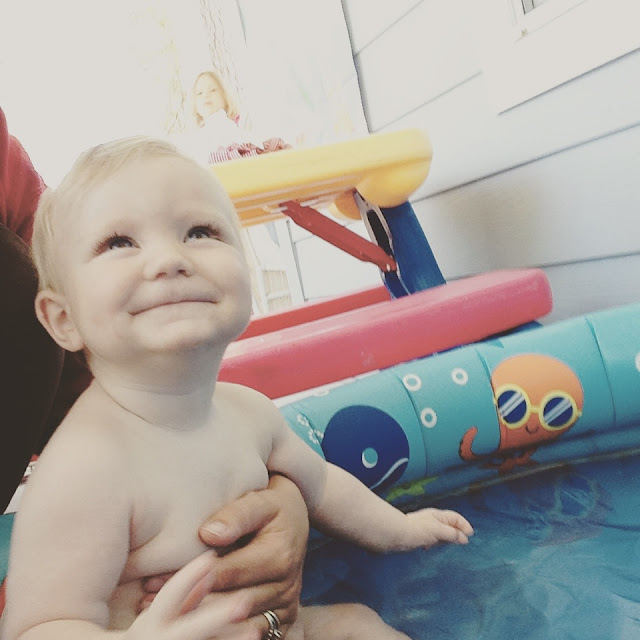 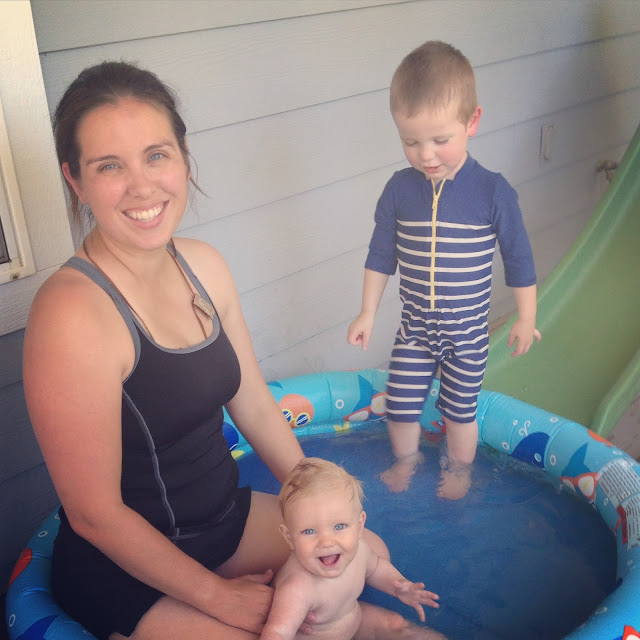 Then I thought, hey, as long as we're in the pool we might as well get one bath out of the way.  And suddenly everyone was helping me wash James' hair. 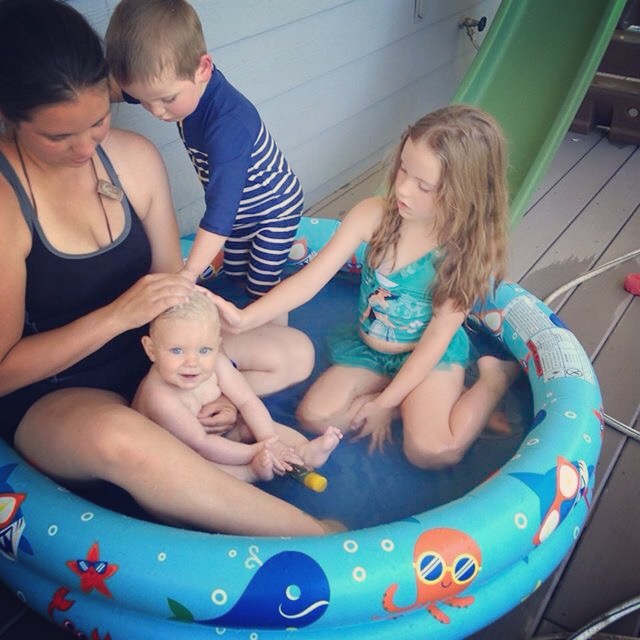 Today I was trying to stay off social media... not entirely but... more than usual. 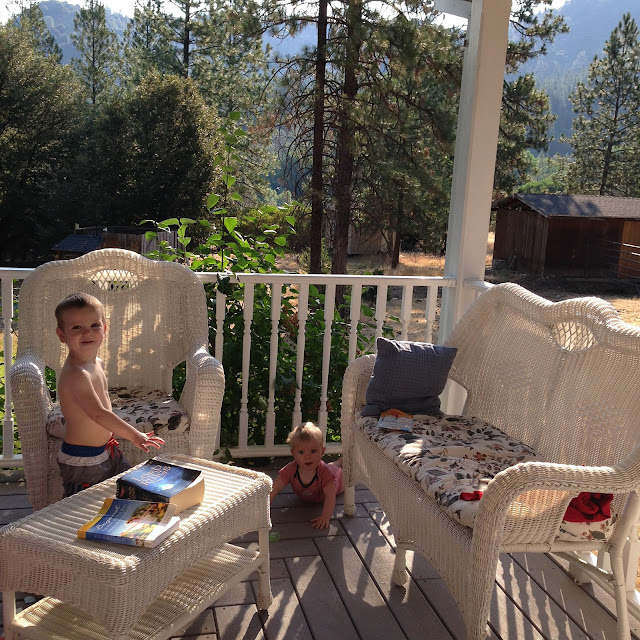 And these are the two books I'm reading at the moment, during those moments when the kids are too busy playing to have any expectations of mom.

Lord of the Rings is softening the sadness of finishing Kristin Lavransdatter and not wanting the book to be over. 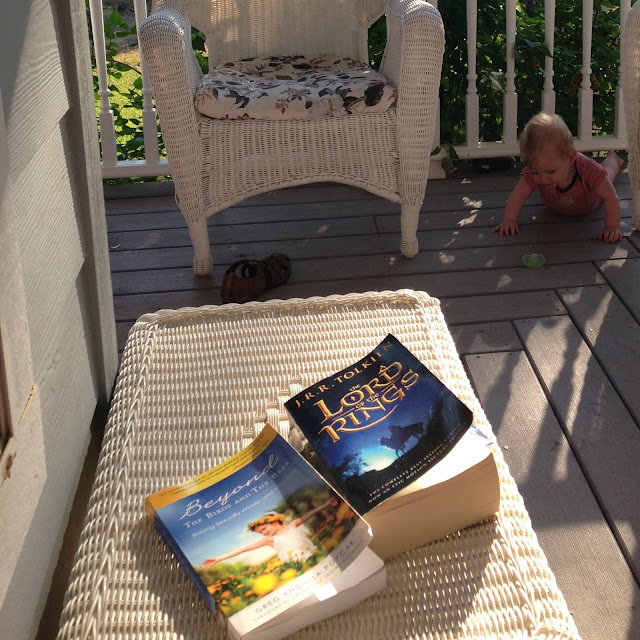 This morning Nani and I were sitting out on the porch with the kids when we noticed that it had suddenly become oddly quiet.  We both looked around.  Where was Maggie?

Now I was sitting at one corner of the porch and she'd been sitting at the other so that we could watch the entire thing and so we knew that she couldn't have gone anywhere, but there was still a solid fifteen seconds of trying not to panic until we found that she'd hidden in the bottom of the pirate ship and breathed a sigh of relief.

It turns out, however, that that sigh of relief was slightly premature.

The thing is, if Maggie is awake and quiet, something is going on.  If she's quiet for an extended period of time, it's probably something she knows she isn't supposed to be doing.

Suddenly Maggie jumped out of the ship and sprinted past us, with Patch hot on her heels, screaming "frog, frog" (which still sounds like another, very bad word, since he hasn't mastered his r's or his g's).  We followed close behind and managed to rescue the terrified frog who she was taking to the swimming pool to swim with her mermaid dolls (and he was totally not a water frog).

And Patch ran around saying "frog" for the next hour...

James has clearly mastered the ear piercing younger sibling scream that lets everyone know that "someone bigger than me is taking the thing I have away from me and I don't want them to,"

Yesterday he decided that Maggie's PECS board was his: 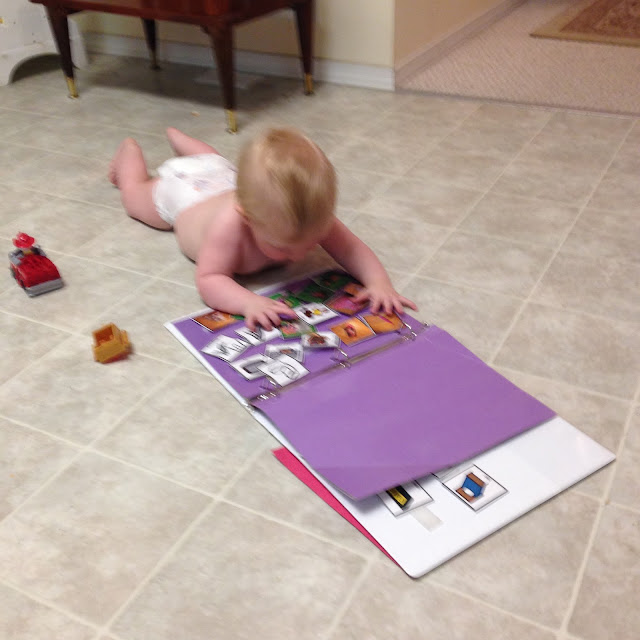 He spent a long time looking at it.  And then when she came over and touched one of the pictures:

So the PECS board will definitely have to be off limits for the little guy since it definitely isn't his.  Even if he really, really thinks that it should be.

Thankfully Baby 'Ames (who she's begun calling "Bumble Bee," which makes my heart melt) is her favorite person and can do no wrong.  At all.  Even if it involves screaming and holding on to her board. 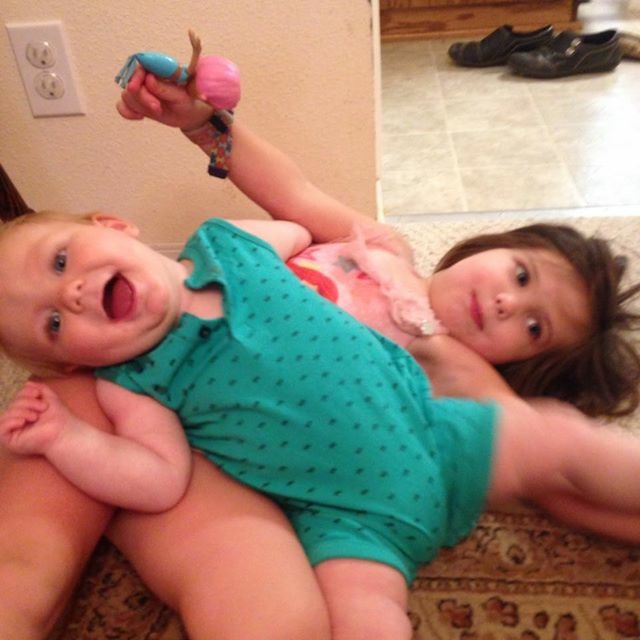 For more Quick Takes head over to This Ain't the Lyceum.
Posted by Cammie Diane at 12:07 AM