My Letter to the Editor

This week I've had a few different projects going (and if I'm going to be totally honest I also finished reading Kristin Lavransdatter, which also ate up a large portion of time since I couldn't stop reading it...), which kept me from spending much time blogging, and one of those projects was trying to find the words to thank the people who helped find Maggie, in the form of a letter to the editor of our local paper (fun fact: before I had Sadie I used to work as the sports writer for this paper).

After a couple of people who saw the photo I posted of the paper on Facebook asked what I'd written I decided to make it it's own little post, although if you've read the post that I wrote the day she ran away you already know more details than I shared here.

So here's my little thank you to those who came out to help us find out little mermaid (with a couple edited names):

I’m writing today to thank the many people who came together last week to save our four year old, Maggie, when she was lost.

Maggie is on the autism spectrum and has no concept of danger.  She loves to run.  If she sees a wide open space she’ll sprint off without ever turning back to see if anyone is following her.  She also loves bodies of water big and small and thinks that she’s a mermaid who can swim, when she really can’t at all. 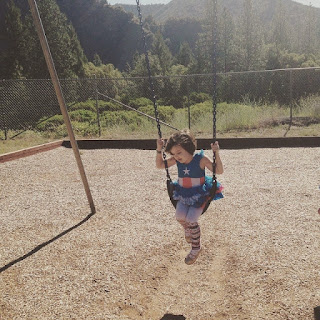 Maggie was born in Redding and we lived in T.C. until just after her first birthday when we moved away when my husband went to law school.  We’ve been back every summer since, and each summer, as she’s become more and more of an escape artist, I’ve been more and more nervous about our stays with my family in J.C. and spending so much time so close to the river.  With multiple locks on each door I knew that we would still have to be vigilant, but I thought that we could keep her safe.

Last Tuesday I was in the living room with my other children while she played in the kitchen, a few feet away.  I got up to check on her when I noticed that it had been quiet in the kitchen for about five minutes.  And that’s when I saw that the latch on the door going out of the kitchen hadn’t quite clicked. She’d made it through three doors to make it out of the house.

I felt like my worst nightmare had come true.  I sprinted towards the river, afraid that I would already be too late, my heart in my throat when she was nowhere in sight.

Many people came to help us that day.  The response after we called 911 was immediate.  By the time my Dad made it down the driveway and up onto the road the Forest Service already had her safely in one of their trucks.

We learned that Maggie had skipped down the long dirt driveway up to the road, where a passing motorist had seen her and stopped to follow her to make sure she way okay.  She was barefoot, wearing tights and one of her favorite pink dresses as she went along down the road, past a large gully and into the forest, where I’m told she tried to go right on past the Forest Service trucks that had arrived to save her.  They scooped her up and put her in the truck and kept her safe until my Dad got there. 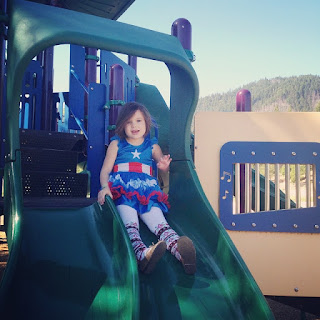 Seeing him come down the driveway, yelling out the window that he had her with him was an amazing moment of relief.  She was alive and safe.

I didn’t get a chance to thank all the first responders that were there that day.  I wish I could say thank you in person to the motorist that stopped and followed her and made sure she didn’t get into trouble and to the Forest Service and Sheriff’s deputies and Junction City volunteers that were there when she was found and also to everyone who was in route to look for her.

I’d like to thank our neighbors Jan and Linda and all our neighbors again for coming out to help when I was running around screaming her name hysterically and for beginning the search down towards the river.

Words cannot describe how grateful I am to everyone who helped us that day.

We’ve installed alarms on all the doors now and a personal GPS is also in route for Maggie, although I pray we never have to use it.

Thank you again to everyone who came out to help save my little girl’s life.  I am so incredibly thankful for all of you.

Cammie Wollner
Posted by Cammie Diane at 12:26 AM