Tessie is calmer and quieter than Maggie ever was at the same age. She seems less bothered by the world, and she sort of takes everything in stride. When she's trying to do something she has a tendency to work and work and work at it.

Her frustration level is usually so low when she's trying to figure something out on her own, that I sometimes find myself marveling at it, because I'm there ready to help, but she doesn't want my help, she wants to do things for herself.

The two big ways she reminds me of her big sister though, is that she is daring, just like Maggie, and now that she's beginning to use words, she's finding very creative ways to express herself.

Maggie had "come on" when she was Tessie's age and she used it for almost everything.

Come on! meant "hurry up." It meant, "can you hand me my sippie cup?" It meant anything that she wanted it to mean when she was in a hurry and she was always in a hurry.

Tessie's phrase of the moment is "Happened?"

She finally managed to say it a week ago and was absolutely delighted with herself. 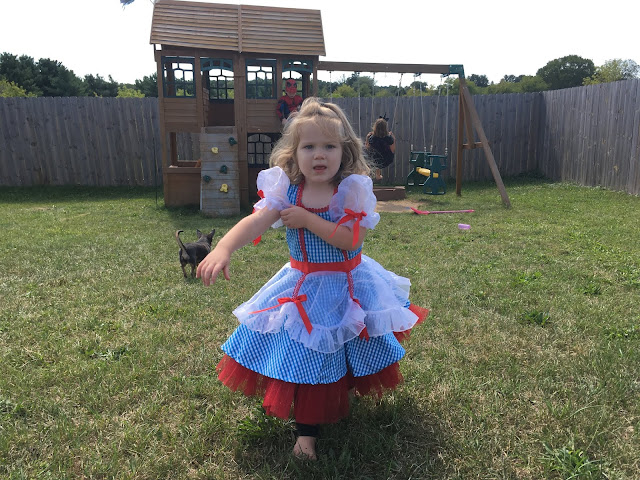 Sometimes she throws in the "Wa?" before the "happened" for a complete "Wa happened?" but usually the happened just stands on its own.

Yesterday she was running and she managed to bump her head lightly. She immediately stopped, and touched the spot, before turning and saying "hap- n'd?" in a barely understandable (because she was a little bit upset) voice. Then she was off and running.

"Happened?" is for everything and she delights in saying it and in being clearly understood.

But that isn't the only word that's come out this week.

Apparently Tessie is a big fan of Ring Around the Rosy. When I picked her up at school they told me that she was even singing the last verse to the tune, all by herself.

And sure enough later that day I heard her humming it. 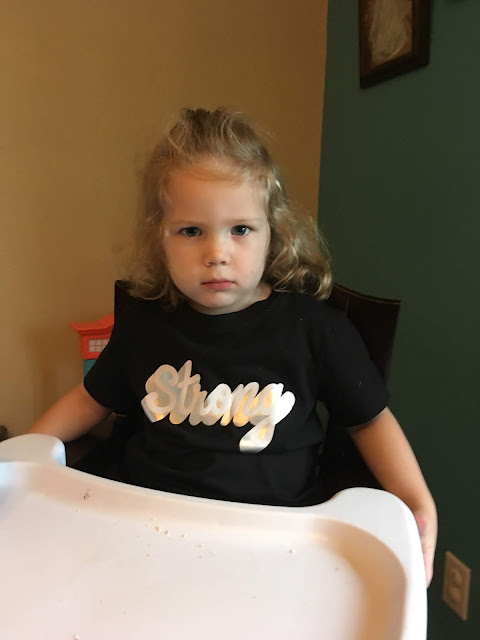 "How cute!" I thought at the time, excited by all the strides in communication she's been making lately.

A few hours later the kids and I were all gathered in the living room.

Maggie was excited. She was zooming around the room giggling. I had finally figured out how to watch a video I had made, upstairs on the big TV, and Maggie was watching a video of herself swimming at the pool.

She was elated, and was narrating everything that happened. "Swimming? Swimming at the pool?" she scripted as she zoomed back and forth giggling, holding not one but two mermaid dolls in her hands. 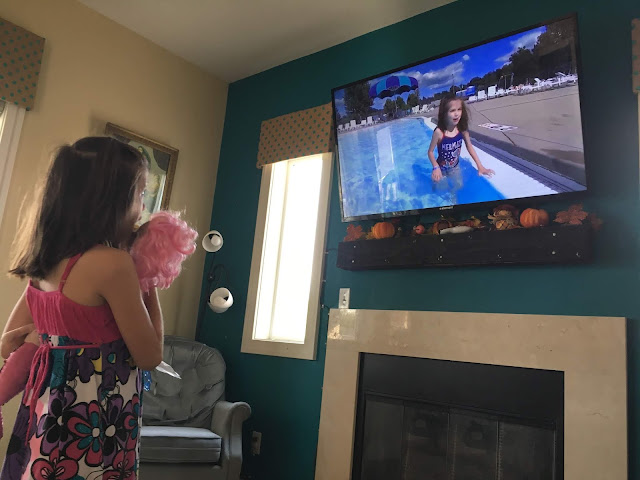 I was so focused on Maggie and her excitement that I hardly noticed the tiny voice singing behind me at first. But then I did.

Tessie had just gotten up from where she was sitting next to me.

She had climbed up on the back of the couch.

She was standing there, and the sound that had caught my attention?

She had started to sing "ashes, ashes..." and that was when I caught her before she could completely fall to the ground.

Apparently she also has inherited her sister's early lack of fear of heights. I hope that like Maggie, she outgrows it as she gets older!

Speaking of lots of words Maggie has been talking up a storm and I love hearing all of her words. So I made a video where I captured as many of them as I had on camera from the last week.

And I usually don't add my weekly Autism News Episode over here, but midway through it is an update from the study in Boston that Tessie was in and it was so interesting!

They were able to identify consistent differences in the EEG results of the kids who were 12 months and under who were on the spectrum. And I talk more about that here:

Now to get the kids up and moving because we have a fair to go to today.

I love this time of year!
Posted by Cammie Diane at 8:33 AM