Tessie let us know again about a great injustice in her life.

She had apparently stashed a crust from a sandwich along the inside seam of her car's seat, where it meets the floor and as she tried to crawl on her belly to reach it Sadie stopped her, while I was helping Maggie into her seat.

"Sad, sad, sad!" she shouted as her sister told her that that was very gross and scooped her up off the floor.

She has a new word and she most definitely knows how to use it. 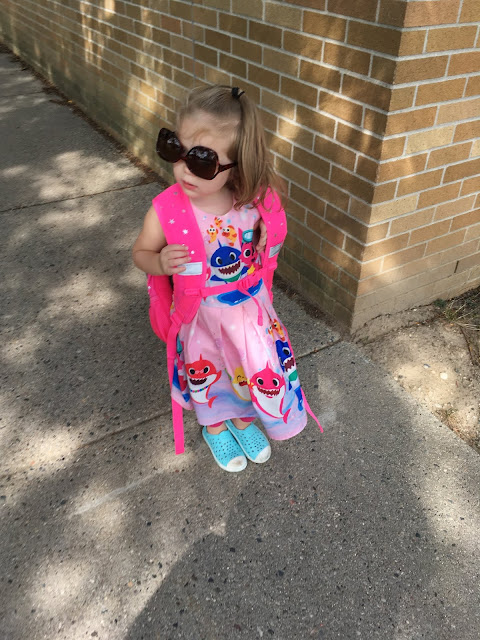 Every day when I pick Tessie up from school the first thing she does is run to me and lift up her arms so that I can pick her up.

Then once I do, she quickly swipes my sunglasses off of my face.

Originally this was so she could see my eyes. But after doing it a few times she realized that if she flipped my glasses over they actually sort of fit her, and so now she has a new motivation for her sunglass theft. 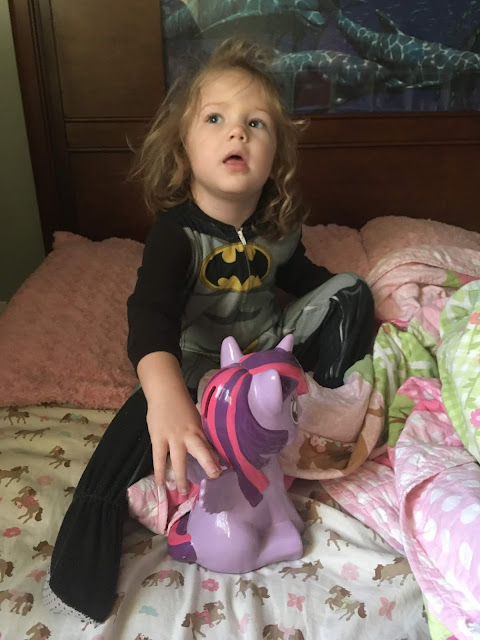 And while she may not look it, Tessie is actually quite a little bruiser.

There is a certain older brother that is not quite two years older than she is who often gets into tussles with her over whose turn it is on the "favorite" (aka the lowest) swing.

They are almost exactly the same size, from their shoes to the size clothes that they wear.

And I can confirm both that he does not let her win and that Tessie has not yet lost a fight over the swing (this basically always happens when I'm making dinner and they all decide it's the perfect time to swing on the swings).

I think being the youngest of five has made her exceptionally scrappy.

Now I think I'm going to have to stop because I keep dozing off.

I missed my blogging time earlier at a parent training at Tessie's school. When I walked in and she saw me she said "hi!" and hugged me, which made it a pretty good day!