The Time She Disappeared for An Hour

This week reached entirely new stress levels when Maggie went missing for over an hour. One moment she was playing in the treehouse, right there on the video screen while I was making dinner.

She went under the porch to look for bugs. It's her favorite place to be, but I can't see her under there on the camera.

Usually it doesn't really worry me. Our back yard has a smooth, 6 foot fence that goes around it, and we've worked hard to make it kid proof, so that when they go outside, it's a fun, safe space for the kids to play in.

All of the kids were running around the house and the back yard, enjoying a perfect fall day. 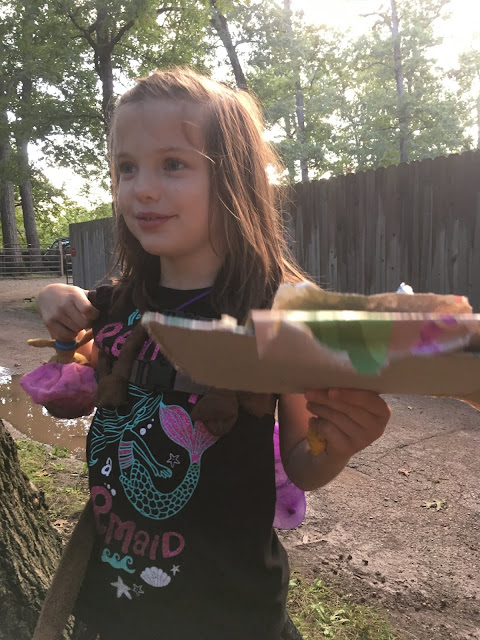 Paul had just gotten home and walked in the door.

I asked him to go out and tell Maggie it was time for dinner, because the other kids had all drifted in, asking what we having and how long it would be, before settling down inside the house.

I'd had a new chicken recipe cooking in the crock pot that day, with chicken, cheese, bacon, and a ranch packet, and I was serving it with noodles. I just had to make the noodles and put it on plates, and everything would be done.

Paul went downstairs with the other kids for a few minutes, and when he came back up he went out to call for Maggie. When he did, she didn't come right away.

This isn't that abnormal.

If she's on a bug hunt she might be totally engrossed in what she's doing, so he went down under the porch to get her.

But she wasn't there. 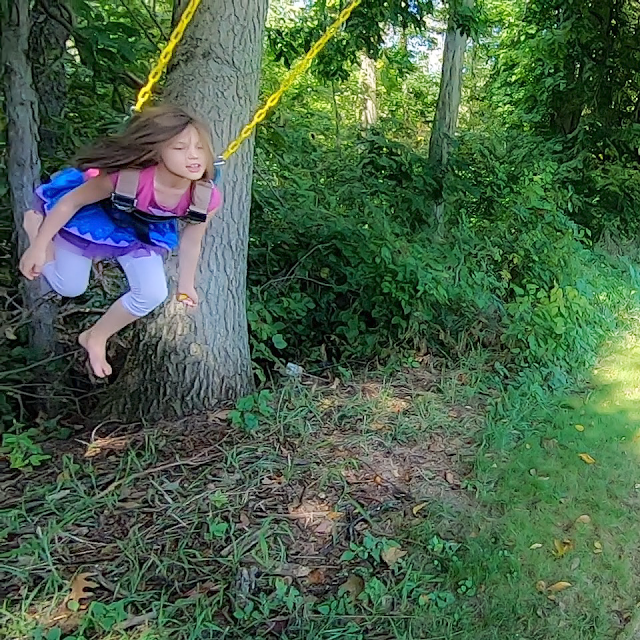 He wasn't really worried. As the other kids gathered around the table, Sadie lifting Tessie into her high chair, it might have been any other day. But I felt an immediate sinking in my stomach.

I'd already been slightly anxious for no particular reason for the previous five minutes, since I'd asked Paul to go out to get Maggie.  I had no reason to be worried just yet, but I ran outside, as Paul started to search the house, thinking she must have come inside.

I was certain she hadn't.

Maggie does very few things quietly and I knew she hadn't walked behind me and come into the house. I knew that she was still outside. And if she wasn't in the yard... the thought made me sick.

I ran around the yard, checking all the places Paul had already checked.

It was entirely empty.

I ran back inside. 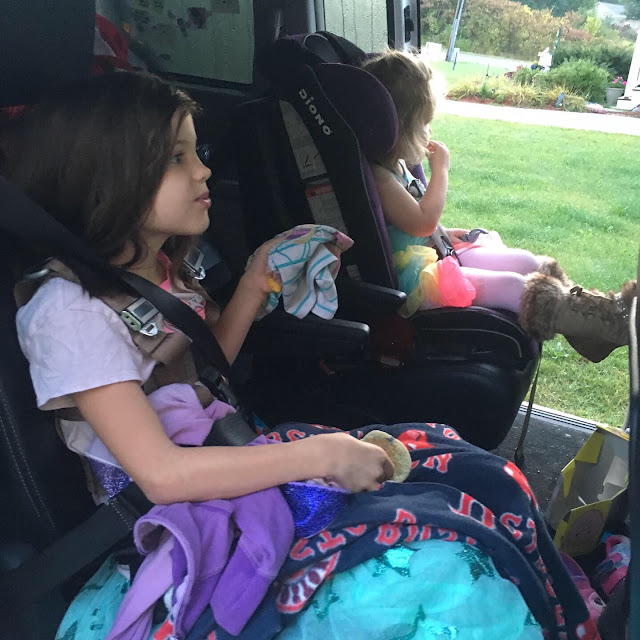 I ran through the house, searching and then ran next door and banged on our neighbor's door. She ran with me barefoot to sit with the kids, while I ran outside, suddenly overwhelmed by the hugeness of the world and how Maggie was nowhere in sight.

I called my mom next.

I got in my car and drove. Nothing was making sense. Every time Maggie has eloped it's been barefoot down the middle of the street. It attracts attention.

When I called 911 I half expected the same response as last time- for them to tell me that they already knew, even though she had only been gone for a few minutes.

I drove past the nearest pond, which is still a good ways away, and turned when I saw my parents cars headed towards me. If they were coming down the road there was no way she'd gone that way.

When I got to the intersection nearest our house I found that my dad had parked in the middle of it and was telling every car that went by about Maggie. 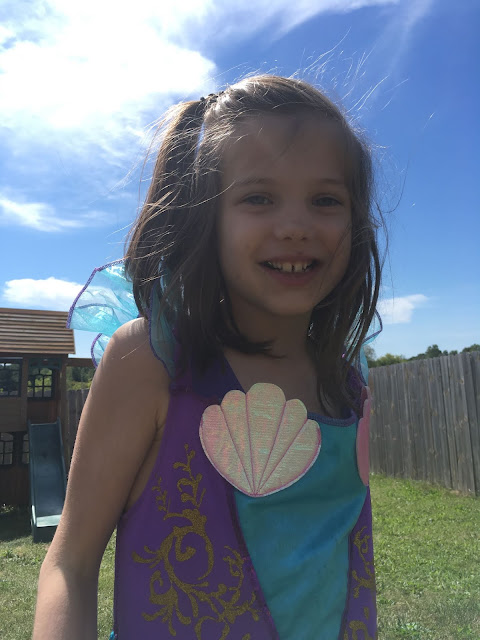 I called 911 again. It felt like everything was taking forever. They told me to go home and wait for a police officer there.

I did and sat on the grass on the front lawn and cried until he pulled up and I ran up to his car and answered all his questions, thankful that I could still picture her black shirt, purple skirt and pink pants clearly in my head, and that I knew her exact height and weight from her last doctor's appointment.

As long as I was giving answers I could pull it together. In the silence, when I no longer had a purpose and was doing something to help find her, when I was waiting as more police and searchers began to arrive, I would fall apart again.

They brought a dog, and were bringing out more. They got out a drone. They were calling in air support. Another neighbor called her ex-husband who immediately jumped in his truck and drove over from another town and began to search.

People began to show up in brightly colored vests looking for her.

The dog ran back and forth behind our house but couldn't pick up her scent. 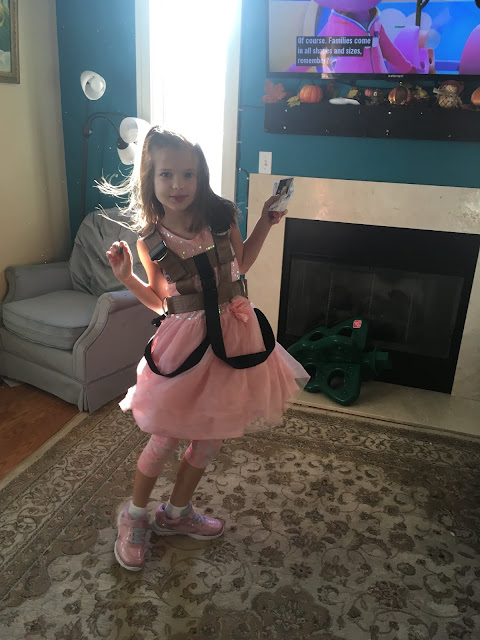 Paul came home from his own search. He ran into the house just after the police officer had sent me in to search again. I'd gone through it three times, and the kids had searched it too with no luck.

It felt useless to me. She'd never, in all her life hidden before. I couldn't imagine her starting now.

"Search every place that isn't locked," he said. And I did.

Then I heard Paul's voice "I found her." And I raced back downstairs.

He was on his way up with her and there she was, safe and sound, and I was hugging her and kissing her forehead, and she gave me a "what's the big deal mom?" look as we took her outside to tell the police that we had in fact found her.

And now for what happened.

She never came inside through the door.

Then she ransacked the room. 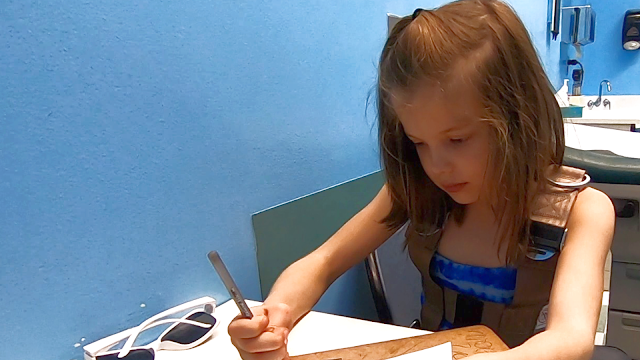 I'm pretty sure that when she came in through the window, she knocked over the Our Lady of Fatima statue that was just inside of it, shattering the base, along with a cup of coffee that I'd forgotten on the bookshelf by the window. And that was probably the moment when she decided to hide, sprawled out on the bed, looking at puzzles and books.

She knew that she was someplace she wasn't supposed to be and now something was broken. She was pretty sure she was in trouble and she decided to stay put.

Everyone was extremely relieved to see her smiling, giggling face.

And that is the story of how Maggie disappeared for a little over an hour and was found safely at home.

I think I have at least 100 new grey hairs from this week. But I am so, so thankful that we found her and that she was safe.

And I've spent the last couple days working on setting up a few new cameras so that there are no blind spots in the backyard, even when she's under the porch. Because of random rainstorms when I'm working we're not 100% there yet, but it should be up and running by the end of the week.

And here is the video that I made the day that it happened:

One of my favorite videos because I think this is such an important topic:

And a video jam packed with Tessie updates on her development and what she's doing at the moment. And she helped me make it!

Now I'm just hoping that this coming week is much, much less dramatic than the one we just put behind us.

I feel like I could sleep for a week.
Posted by Cammie Diane at 10:03 AM