I was in the kitchen yesterday making dinner when I heard a blood curdling scream.

"Mom!" came Patch's voice almost immediately, before I'd even taken a single step. "Maggie just took Tessie's crackers." A few moments earlier I had given him sandwich crackers to distribute, and he'd handed out two to each kid.

But the scream only lasted for a moment. Before I could even take a step I heard him go on: "Never mind Mom. Tessie took it back!" his voice was tinged with awe. This was not something that either he or James would dare to do.

I turned back to what I was making for dinner.

I shouldn't have been surprised.

Tessie may not be very verbal, but as the youngest of five, she most definitely can hold her own in most confrontations.

She stays  to herself most of the time, but heaven help anyone who tries to take something she's playing with, because she is transformed from a sweet curly haired little girl who hardly makes a sound, to a little bruiser ready to brawl over a sandwich cracker which her much bigger sister has stolen or over who's turn it is on the lower swing which she can easily climb into (James tries to steal it from her frequently). 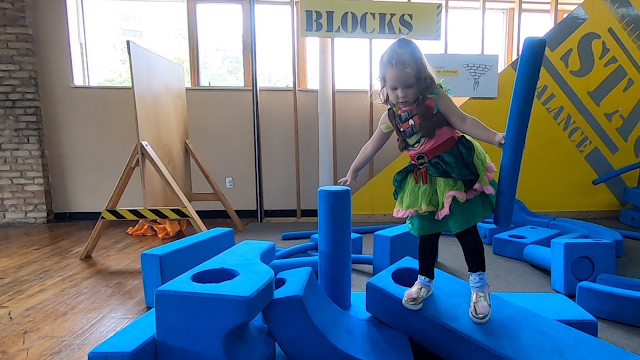 And Maggie, who thinks that Tessie is the most awesome person on Earth, let her have the cracker back, which is the second most shocking part of this whole story to anyone who knows her.

It's also the third most shocking thing I've seen this week, #1 being when Maggie cried for a mermaid toy that had fallen on the ground in the car and when we were finally stopped and I could retrieve it she handed it to her younger sister twice and said "here Tessie" in the sweetest of voices.

The second most shocking moment was when she offered to let Tessie hold her purple (so favorite) sequined mermaid doll on the way to school on morning so that Tess could stim on the tail sequins.

For those who watch the vlog, here is a special day when all the kids were in school when Tessie and I got to go out and have fun, just the two of us.

Now for a little rest before dinner because today is a Tuesday that feels like a Friday.
Posted by Cammie Diane at 5:23 PM