Why I Can't Take Credit for our Incredibly Mellow Patch 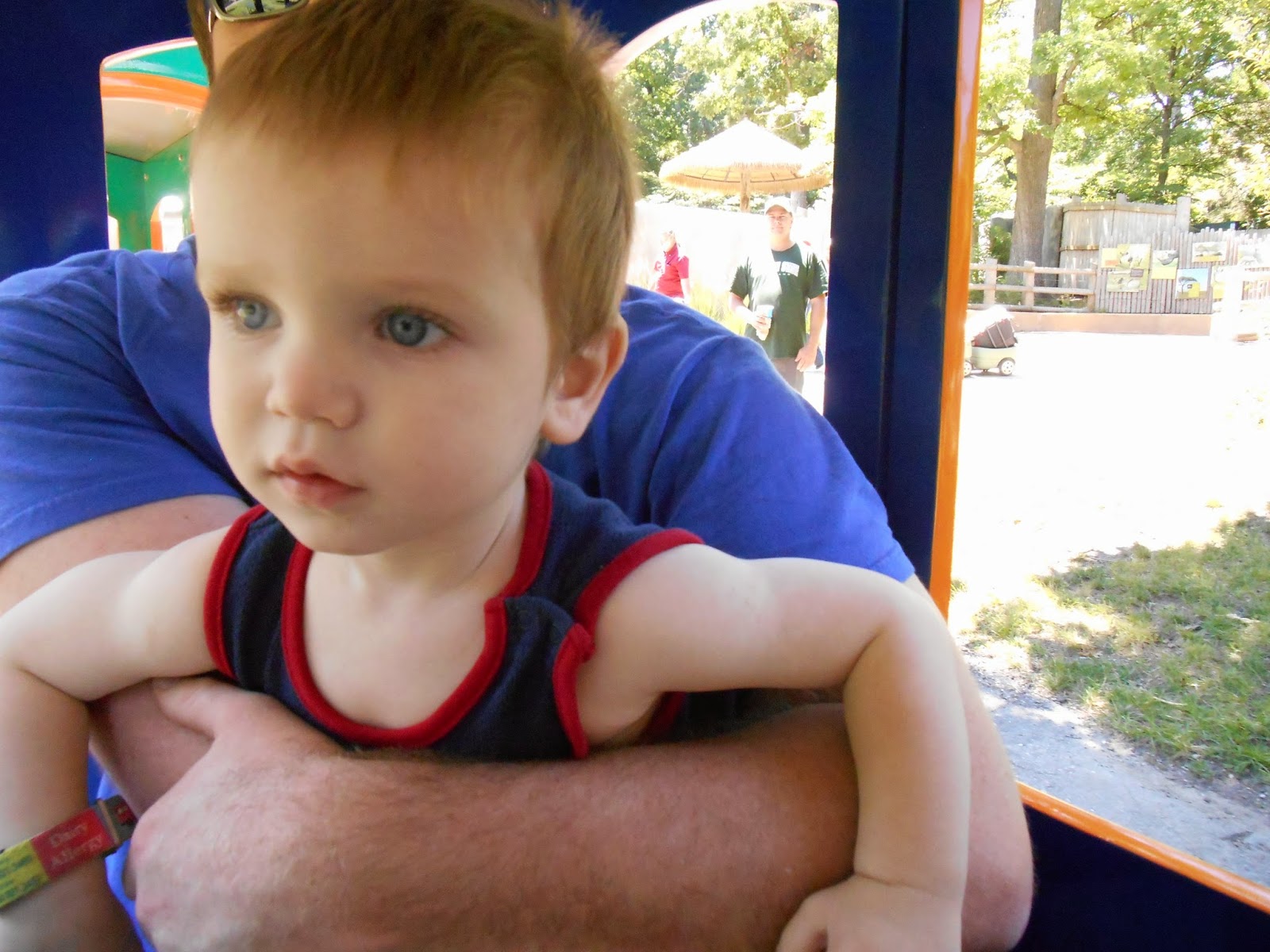 Last week we took Patrick to his allergist for his yearly retest and in the days that followed I found myself turning the appointment over and over again in my head.  Honestly I spent most of the appointment in total and complete shock because of his behavior.  The hour inside the doctor's office went something like this:

Paul and the girls dropped us off at the doctor's office and went to get a quick snack while Patch and I walked inside.  Patch turned and called "Paul! Paul!  Paul!" as the car drove away, clearly distressed that Daddy was not going to be the one taking him to his appointment (he usually is the one to take Patch to his well baby checks).  I told Patch not to worry, that he'd pick us up after the appointment, and he held on to my hand and we walked inside.  Once inside I checked in at the front desk, I helped Patch into a seat in the waiting room.  I'd brought Sadie's kindle to keep him distracted, but he pushed it away and instead sat in the chair for five minutes looking around the room.

The nurse came to the door and called his name and I helped him out of the chair.  He put his hand in mine and we walked into the back.  The nurse asked me to take off his shoes and I helped him while he said "shoes, shoes!" and smiled.  Then he stood on the scale to be weighed and then stood against the wall while they measured him.  I almost fell over (getting both of our girls height and weight for involved screaming and tears for years).  Then she told us to follow her and while I gathered up our things Patch walked after her to the waiting room.  I had to catch up to hold his hand (although I guess I really didn't need to).

We went into the room and he sat on the table while they told him he was going to have an "arm hug" and took his blood pressure.  He sat perfectly still, looking around, smiling.  Then they took his temperature (or tried to for two minutes, under his arm, before declaring the thermometer broken).  After that we went over his history while he sat in a chair, listening and watching and looking something like this: 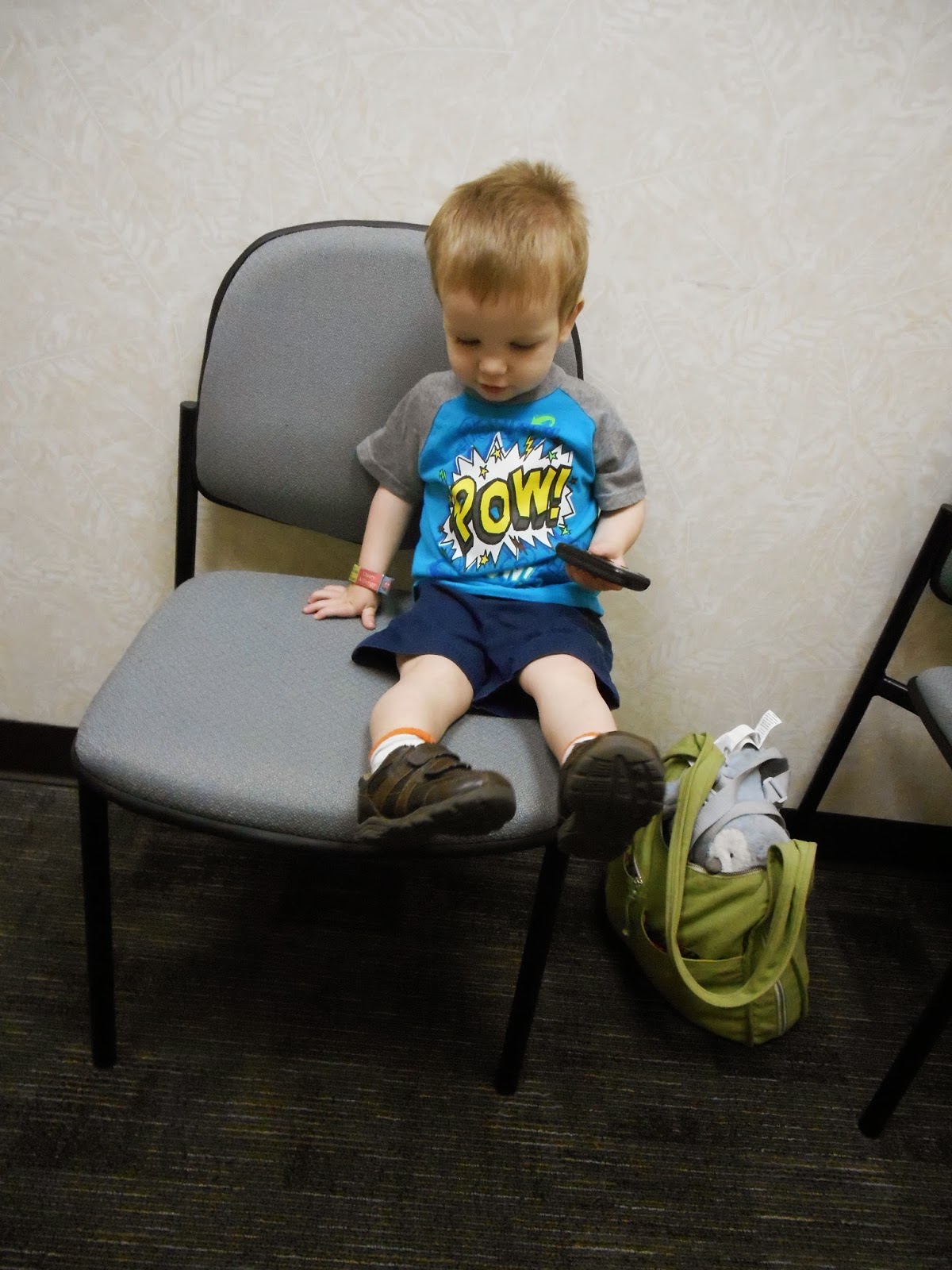 He held my phone in his hand while he sat.  It's pretty basic.  It's not a smart phone and doesn't have games, but he presses buttons and looks at the background picture of him and his sisters playing outside in the backyard.

The nurse left the room and he got down on the floor and pretended my phone was a car, giggling when I said "zoom" while waiting for the doctor.

The doctor came in and examined him.  Patch sat still while he looked in his mouth and ears.  The doctor commented that he was the most pleasant 19 month old he'd ever seen, sitting still smiling at everyone.  We discussed the retest and he said it looked like things were going very, very well.  We talked about the possibility of a kidney bean allergy (poor Patch!  He loves kidney beans!) since he has a fairly bad reaction every time he has them. 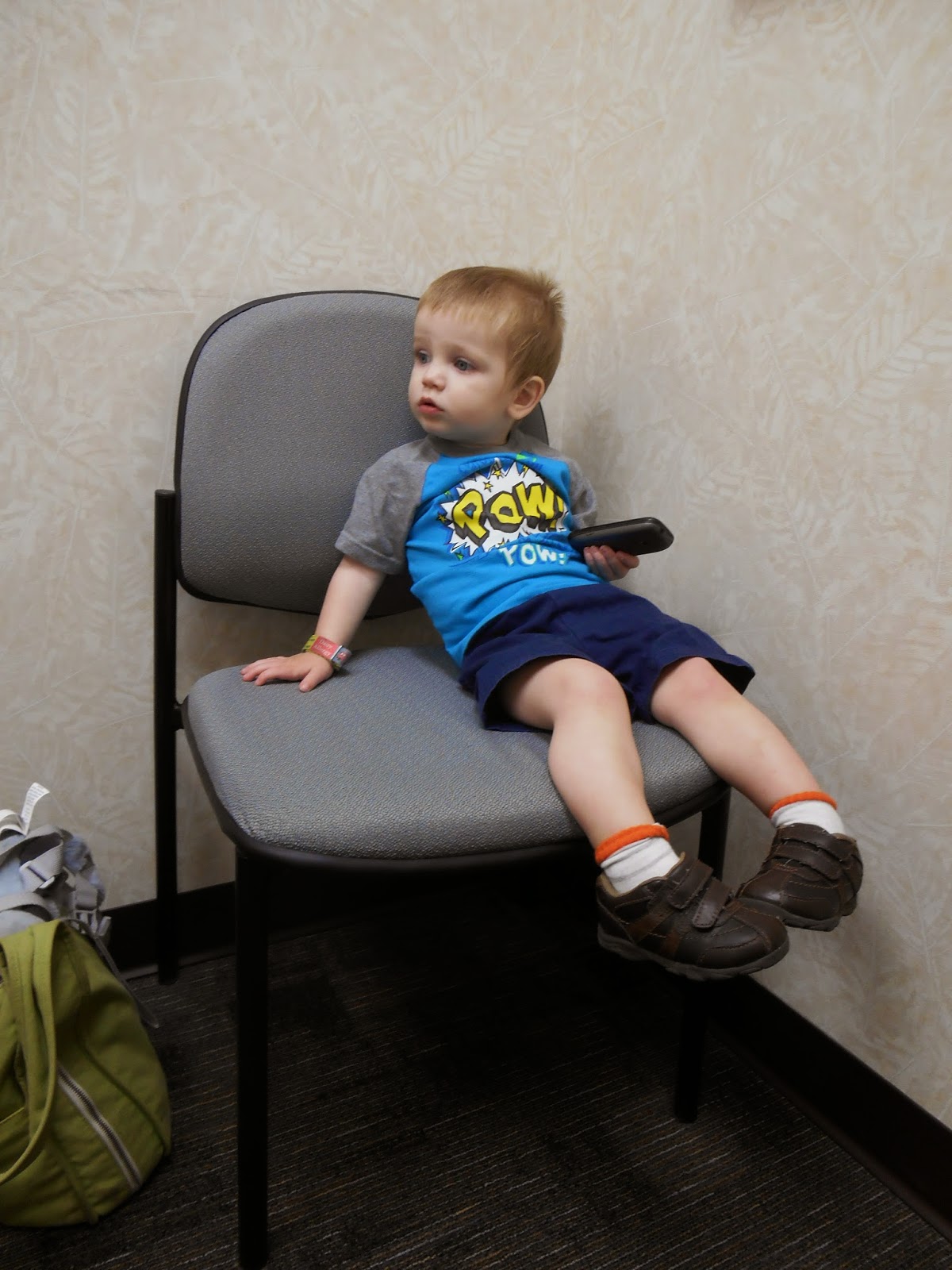 He left the room and the nurse came back in and used the tray to make six pricks on his back.  Right away two of them began to swell up.  After ten minutes one of the swollen spots had disappeared and only one (the control) remained.

Patch continued to play with the phone.  He fussed a tiny bit when I told him not to itch his back.  A nurse came in and saw him trying to sneak scratching (he'd point at something and then try to itch) and said "oh no!  Don't itch!" in a sweet voice and his little face turned red.  When she left the room he burst into tears for a moment and then went back to playing (he can be really funny about getting embarrassed when he's told he shouldn't be doing something by anyone he doesn't know super well... if I tell him no he laughs...).

She came back and brought him a toy set and he played and tried to sneak another scratch and frowned when I told him no, but mostly listened.  At 10 minutes the test was negative and I was so, so hopeful when the doctor checked in.  Just before the doctor came in to read the final test the reaction started, with one bump swelling up quickly and a rash breaking out over his chest and lower back too.  It was a positive.  Another year without dairy.  A retest in another year.  We talked about eliminating kidney beans too since it seems like he's allergic (they didn't have kidney beans in the office, next year we'll bring a few with us and they'll test that too).

I talked to the doctor a bit about the fact that all of our kids so far have allergies (or a strange, strange sensitivity/celiacs/whatever in Mae's case... he suspects celiacs) and asked what he thought our odds were for the baby. He laughed kindly and said that at least we've been very alert to them and have handled them very well.  I imagine that with three out of three having reactions the chances are high that the new baby will have an allergy (or allergies) too. 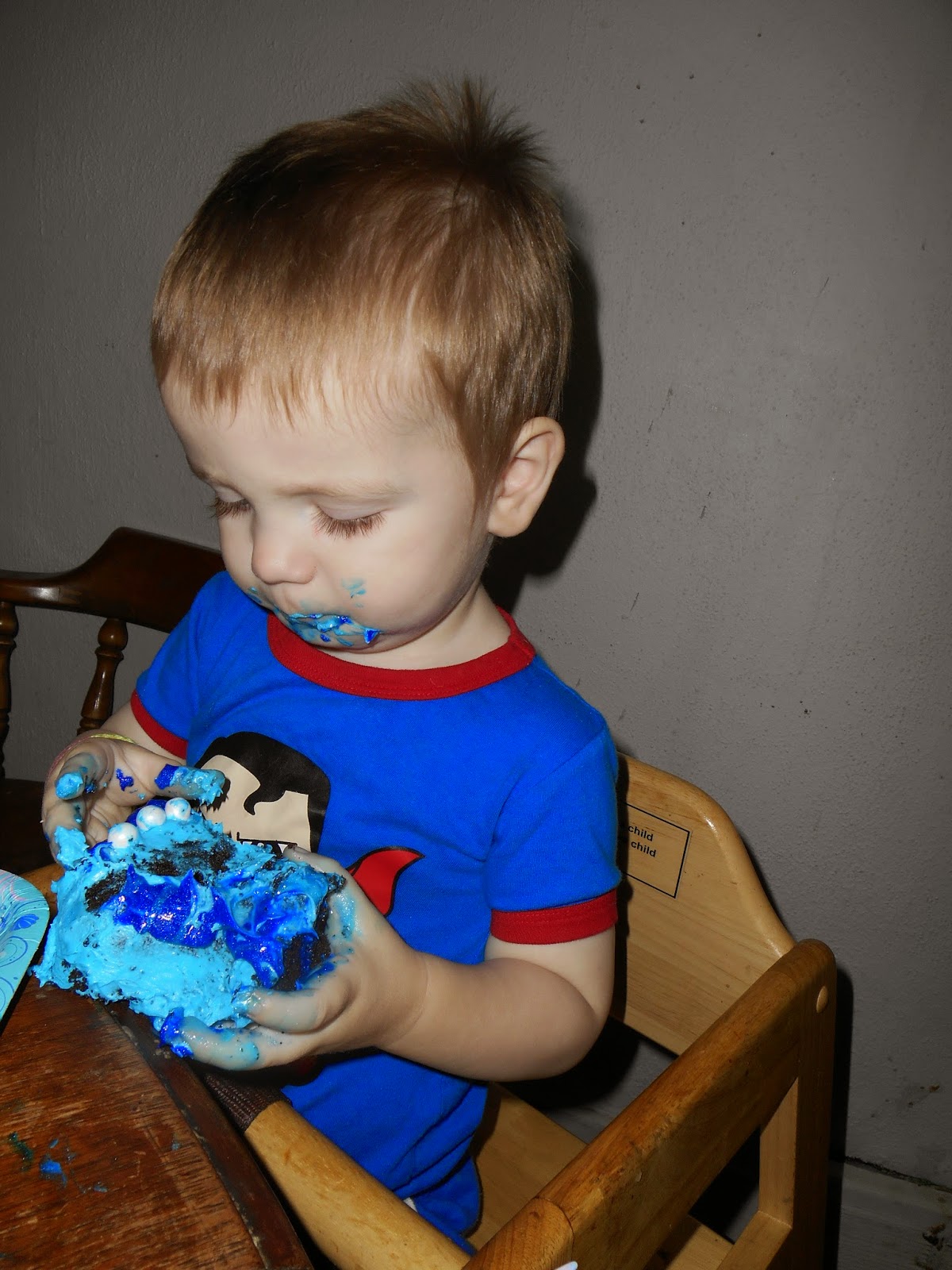 We got our script for the new epi-pens and Patch held my hand as we walked out of the office, smiling at everyone as he went and yelling "Paul!  Paul!" when he spotted the van from across the parking lot.

And that was that.  A good appointment (well other than the positive results, but I sort of already knew that that was the likely result).

Yet it had me thinking all week about all the other appointments we've had with the girls over the years.  After monthly ear infections and lots of poking and prodding Sadie would scream at the sight of a doctor's office for the first three years of her life, and would shriek until we were out the door and safely in the car.  Mae is usually fine as long as no one is removing her shoes, but is also bouncing off the walls, overstimulated by everything that's going on.  The experience couldn't have been more different.

And I couldn't help but thinking how once upon a time, had Patrick been my first, I probably would have felt like I could take credit for his behavior.  I would have thought that it was my super parenting skills in action.  Look at how well our strategies for child rearing have turned out, I would have told myself.  However, having raised his sisters I know that that absolutely isn't the case.

Patch is a laid back little kid.  He was an easy baby and now he's an easy, agreeable toddler.  Sure he says "no" and has his moments but all in all, parenting him is a walk in the park compared to his sisters at the same age who had me constantly on my toes.

When I tell him "no" or "stop" there's actually a pretty good chance that he'll listen to me.   And that has very little to do with me or anything I've done at this point.  My parenting style really hasn't changed all that much. It's just his personality.

That doesn't mean I throw discipline out the window (not at all actually).  It simply means that as time goes by I realize what a large role personality plays when kids are tiny, even as I see, as Sadie gets older, how consistency (even when it doesn't seem to be working at all) can eventually sink in.

Later in the day we went out to dinner for Mae's birthday.  The restaurant was nearly empty and while I reminded Mae to stay in her seat about 40 times over the course of the hour we were there, she listened and would sit down each time she heard the words.  As we left the waitress stopped us and said "Your children are the best behaved I've ever served!"  We smiled and thanked her and headed out, laughing as our eyes met, knowing that on any given day that dinner could have turned into a stressful disaster... because if there's one thing we've found is that whether or not someone will be melting down on any given day seems to have less to do with how well I've plotted and planned and explained things (although all that helps) and more to do with a roll of the dice and everyone's moods as we head out of the house and into the world.
Posted by Cammie Diane at 12:47 PM